When Will Don Cherry Take a Hike? 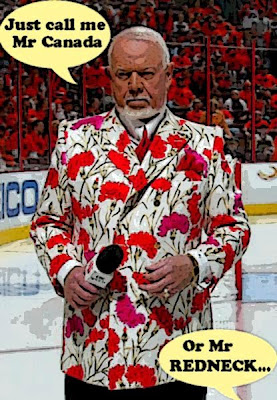 One of the things I hate about being Canadian is having to listen to the right-wing redneck Don Cherry.

I do my best to ignore him. I once pulled a muscle leaping across the couch trying to hit the mute button. But because my friends find him entertaining I usually have to grin and bear it. And his demagogic shite just keeps getting worse and worse.

Cherry's latest stab at the spotlight came on Saturday's edition of Hockey Night in Canada, during an extended demonstration of his antediluvian world view. We all know how Don Cherry feels about things, if only because he's been shouting his opinions at us for three decades. But the act is getting tired. Tired, and worse.

But it was the way Cherry presented his case that left the usual sour taste. Besides the usual anti-European bile - which should perhaps be toned down after Cherry's attempt to build a junior team in Mississauga without Europeans back in 1999, resulting in a team that won 16 games in three seasons - Cherry showed a montage of soccer players celebrating, and as it showed a group of four enthusiastic black players dancing close to the camera, Cherry said, "Now watch this, look at this - this is what we want our hockey players to act like?"

The charge of racism has been thrown at Cherry over his treatment of Europeans and Francophone Canadians, but because those aren't traditionally identifiable minorities, the charges don't seem to stick. But intentionally or not, this looked for all the world like a more familiar brand of racism.

He has insulted Europeans, French Canadians, and gay people. He's a chickenhawk cheerleader who is always suggesting that other Canadians aren't as patriotic as he is. He is wrecking our national game and sending the wrong message to kids by glorifying violence. And now he's flirting with racism?

You know once he might have been an entertaining redneck making a fool of himself in a klown costume.

But now he's just a tiresome old bigot bore making us look like a nation of rednecks.

I feel the same way you do Simon. And I don't watch Canadian hockey because of Cherry.

Let's make him a senator! Then we'd never have to listen to him ever again, just like Duffy. Right?

it's cool to know these things, somewhat -- for those of us who considered the move north to escape The Machine. i could have grown accustomed to vancouver.

Kornheiser and Wilbon of Pardon the Interruption eviscerated Cherry, or as they call him "Archie Bunker", for his calling for the slicing in half of Ovechkin.

What I don't get is why oh why do the CBC gives any space to this clown... We own the CBC, should'nt they encourage canadian unity instead of this divise a*****e?

Deliberate or not, the way Cherry said it made it look a veiled threated to black hockey players present (Donald Brashear, Jarome Igilna, Wayne Simmonds, Kevin Weakes) and past (Grant Fuhr, Jean-Luc Grand-Pierre, Sean Brown and of course Willie O'Ree).

It's as much bs as when Al Campanis said there weren't too many black swimmers because they didn't have the buoyancy. He was blackballed from baseball for saying that. It's time for Cherry to hang up the schtick as well -- his being against visors (still) is bad enough.

Are those nuked or GE maple leafs on his jacket?

Cherry stays on the air for the same reason the Virgin radio station did those 'gods of rock' ads.

There is still a large enough demographic of the country (and likely the Northeast signal catchers of the US) with enough of the country's money that will agree with everything he says and chortle with entitled glee at his 'stick it to the PC-man' pronouncements. Only when the demographic swings enough to something less 'shockjock' will he be gone. Until then, he's a money maker. Just like all the rest of the SJs out there.

And that coat of his is someone's funny version of a white jacket with a red carnation.

I had grudgingly tolerated this idiot up until his Christmas
rant of 2007. This guy is just a complete and utter embarrassment and I am completely perplexed by those who buy into his horseshit.

Hi Jan...well I'm not prepared to go THAT far. My Habs need me to focus my brainwaves on the screen and keep the OTHER team from scoring too many goals. I prefer to go to the kitchen and make myself a sandwich during the Cherry segment...or if I'm not hungry have a shit and read the newspaper. Again. Anything but Don... :)

Hi Jennifer...OMG. As if the Senate isn't bad enough with Duffy there. And believe me we WOULD hear from him. He'd be forced to apologize for one gaffe after the other.Hmmmm...on the other hand I do see some comic potential.As long as we could pay one of the old farts on the other side to heckle him mercilessly. A fist fight on the floor of the Senate? EXCELLENT... :)

Hi unokhan...glad to be of service. As placid as the Great White North is we seem to be stuck with these ghastly right-wing wingbats. They may not be as nasty as the ones in the U.S., but they about twice as boring.
On the other hand...Vancouver is a long way from Cherry Land.
Just don't leave the city.... ;)

Actually, I like him where he is. Keep the nutters within their areas of competency. Talking about inconsequential things: how flags are great, who are the sissy players, how much more honourable people were when you were coaching, how great it is for soldiers to watch you on tv, and pointing fingers at the camera.

Sometimes Cherry says something I agree with, about hockey. Just take what else he says with a grain of salt.

janfromthebruce: what kind of hockey do you watch then? Icelandic Hockey? Field Hockey? If you don't like Cherry, his show lasts only something like 5 minutes between the first intermission. He's very easy to avoid.

Hi jymn...good for them because I found that remark by Cherry particularly gross.The NHL needs all the Ovechkins it can get and Cherry sounded like some kind of gangster. The man is such a narrow minded bigot it's PATHETIC...

Hi Enkidu's Palace...yes good question. I forgot the CBC. They're probably afraid of him...and too desperate for ratings. I'm a big supporter of the CBC but I'm afraid Cherry makes them look cheap and vulgar. They can and should do better than that...

Hi Blast Furnace...yes I agree with you although I didn't see the clip myself. But thank you for pointing out the visor angle. I'm sure he was against helmets too. Not masculine enough. The man is an absolute idiot. The stuff he inflicts on adults is bad enough. But the influence he has on kids is even worse...

Hi Oemissions...Gawd. I don't know. But it sure would be nice if a swarm of hungry angry bees came along.... ;)

Hi Niles...*sigh* trust you not to let me down gently... ;)
Now I'm so depressed I can't write anything. But yeah you're right. He does have a large following.I like to think it's a rural/urban thing. But I'm forced to face his idiot legions in my own living room...
My only hope is that we can keep this shameful secret to ourselves...so the rest of the world doesn't think even less of us.
But I'm not optimistic...

Hi Omar...OMG. Thanks for that clip. By the time it was over I was just staring at the screen with my mouth open. :)
I've never seen so much shite in such a short time. From the war on Christmas...to an anti-native diatribe...to the chickenhawk patriot it was enough to make me barf. The CBC should have fired him if only for his complete lack of professionalism. But as I mentioned above, they're probably too scared of him....