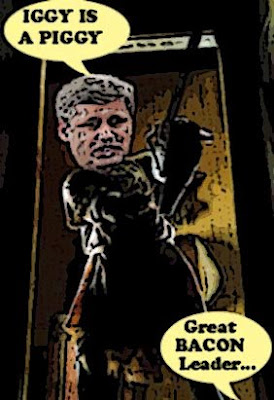 OMG. I see Great ,,, Chainsaw Leader isn't content with sawing the economy out from under us. Vroom...Vrooooom.

Now he wants to go after Iggy.

The Conservatives are preparing a series of attack ads targeting the Liberal leader by going through hundreds of hours of video clips of his speeches and interviews, according to the Canadian Press.

They hope to glean more fodder for their campaign by mining a lifetime of Ignatieff's musings from his career as a public intellectual.

Hmmm...I wonder how he's going to do that?

Will he attack Ignatieff for being a hawk on Iraq?

"It [referring to calling a Minister "Idiot"] was probably not an appropriate term, but we support the war effort and believe we should be supporting our troops and our allies and be there with them doing everything necessary to win." - Stephen Harper - Montreal Gazette, April 2003

Will he go after Ignatieff for spending so much time abroad he doesn't love Canada as much as Harper does?

"Canada appears content to become a second-tier socialistic country, boasting ever more loudly about its economy andsocial services to mask its second-rate status, led by a second-world strongman appropriately suited for the task."- Stephen Harper in his article "It is time to seek a new relationship with Canada," December 12th, 2000.

Er....no...definitely NOT. But what a prophetic statement eh?

Will he accuse Count Iggy of being an aloof intellectual who can't relate to Canadians suffering the effects of a brutal recession....aggravated by the Cons?

"In terms of the unemployed, of which we have over a million-and-a-half, don't feel particularly bad for many of these people. They don't feel bad about it themselves, as long as they're receiving generous social assistance and unemployment insurance."
- Stephen Harper, Montreal. June 1997

He can try. But since Canadians know him to be as empathetic and cuddly as a frozen fish....or a cold hearted psycho.

So what is Harper going to do? Attack Ignatieff for being a hawk on Afghanistan? Um... maybe.

But only if he wants Canadians to call him Great Cut and Run Leader.

Which leaves Harper with only one avenue of attack as far as I can see. Accuse Ignatieff of pretending to be a Liberal.

Because that's the REAL problem isn't it? Harper is the Last of the BushCons who like them has run out of history. The recession is KILLING them. They can't even act like Cons because their rotten stinking brand has been RECALLED. Iggy may or may not be a piggy...but he is a Liberal in Liberal times. Harper knows that him and his piggy Cons will soon be BACON.

And that's why he's so DESPERATE.

Golly. I love double-edged swords .....or chainsaws. Especially when they are wielded by slimy attack BushCons with slippery hands.

Anyone wanna play the Quote Game?

Not to mention: the tarsands.
Actually, I started my own attack ads against Mr. Ignatieff almost a year ago. He voted against a Bloc's private member's bill to make labelling of GE/GMO products mandatory.Previous to that date and after Monsanto's treatment of some Saskatchewan farmers and especially Percy Schmeiser and his wife, several of us sent slices of bread to Ottawa offices demanding no GE wheat.
The way that Monsanto company treated Percy for so long was a form of torture.
Where I live, we are fortunate to have some free concerts with Bill Henderson singing his amazing song: "Patent on the Wind"
I believe you can have a listen online for free. Well worth the effort.
So, not all prairie folks support Mr. Harper about his agricultural policies. And while I'm on about agriculture, talk to members of the NFU(National Farmers Union). They will give you an ear full about what some conservative members were up to in order to block the CWB(Canadian Wheat Board)
I'm not the only one who has crowed "tar" and "feather " these fellas.Or if you find a few rotten eggs out there put 'em in your basket and keep them handy.
Getting violent in my old age.
Can hardly wait for that pension.
Mr. Baird spent most of his campaign time at Seniors Centres last election. And boy, did the Seniors ever love that young Trudeau.
Now, back to attack ads:
After that last election, I decided to start a movement to stop attack ads on TV and the radio from any politician. Actually I extended it too any paid political ads. Our media can promote discussion, or "debate" as they like to call it, but only when an invitation is sent to all representatives of political parties.The farthest I've gotten on this is to write a few letters to some MPs and the CBC. Quite a ways to go yet.

Me again:
Speaking of attacks: did you catch the one about the Scumdog dad beats boy actor?

"...if you find a few rotten eggs out there put 'em in your basket and keep them handy.
Getting violent in my old age.
Can hardly wait for that pension."

That's interesting stuff about the GE/GMO and the wheat board.
I was so glad to see the farmers teach the Cons a lesson on the WB.
If they had come to power sooner these wretched ideologues would have deregulated us into a full blown depression.
And good for you for getting engaged and actually doing something for change. Younger people can learn some lessons from you. Because me and my friends don't do half as much as we could and should. I at least have the excuse that I blog and I'm disorganized ... ;)
But we are a very passive people.
As for the attack ads...if there is only thing I could get rid of it would be them. They are so ugly and so bullying and American they
physically disgust me.
It's just one more ugly thing we have to thank Stephen Harper and his Reform Republicons for. Thanks Bozos.
Keep up the good work...the Victory Party will be worth it.... :)

P.S. I didn't see the Scumdog story. But it sounds awful...