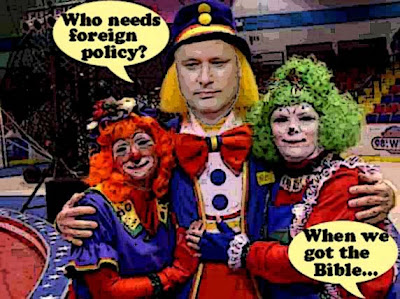 Previous Conservative governments showed some progressive strains abroad. Not these Regressive Conservatives. With Russia, with China, in the Middle East, they harbour old confrontational attitudes. There's no new outreach as there is in Washington, no new thinking for new times.

On fiscal matters, it may be that our PM has become more moderate. But as for world affairs, there's clearly no need for his party's hard-liners to be rolling over in their caves.

But he never explains WHY the Cons are making us the laughing stock of the world. Why are they more pro-Israeli than Israel? Why hasn't Great Leader visited China? And why are they trying to portray the crumbling Russians as the new/old Red Menace?

Is it incompetence....or is it something else even more disturbing? Like the foreign policy visions of the theocons who are crawling all over the PMO.

The ones who share the beliefs of Harper and his church. The ones he doesn't like to talk about.

The Alliance Church, to which Harper has belonged for decades, believes Jesus Christ will return to Earth in an apocalypse, won't ordain women, strongly opposes abortion and divorce, condemns homosexuality as the most base of sins and believes those who aren't born-again are "lost."

The church is one of the most aggressive missionary churches on earth, and the biggest thorn in its side....or nail in its cross.... is China which doesn't allow them in. Which explains why Harper won't be taking even the slow boat to China. Why he snubbed the Olympics. Why he is antagonizing China....even if it hurts Canada's economy.Because his church would CRUCIFY him if didn't.

And then there's this fanatic devotion to Israel right or wrong. Which can only be explained by the beliefs of these theocons that Israel will be the site of the Battle of Armageddon.The place where The Messiah will land...and pick up the faithful.

As well as the site of the Battle of Gog and Magog. The one Harper's good friend, the ridiculous Christianist Charles McVety, is always talking about. The one the Bible says will be so fierce it will take seven days to bury the dead.


And who are the villains of this Last War? Yup. You got it.....the Mooslim hordes and the RUSSIANS.

Oh my Goggy. You know...... I believe that these apocalyptic economic times, and the collapse of the Christian Right in the U.S., have convinced many of these theocons that the End of the World is at hand.

And now they are so worked up they're DANGEROUS.

I know that Stephen Harper is running our foreign policy. But what we really need to know is why is it so CRAZY?

“I say this not just to Jews, but to gentiles everywhere. It is important to remember that history teaches us that those who aim to destroy the Jewish people — to destroy the nation of Israel — that kind of spirit will not be quenched by that objective.

“They will be a threat to us all, and that is why they must be opposed.”

And who is REALLY calling the shots? 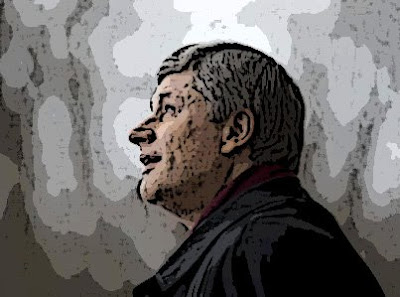 Martin's column hits a generous number of bumps in the logical road.

First off, the "new thinking" Martin alludes to seems an awful lot like the old thinking, where in then-Prime Minister Jean Chretien was too chickenshit to so much as utter the words "human rights" to Chinese officials.

Martin insists that Canada has done nothing regarding nuclear proliferation, yet we've used our diplomatic resources to support UN sanctions against Iran on the basis of their nuclear program.

He also seems to overlook the fact that President Obama seems content to drag his feet on the Omar Khadr issue.

Under the Harper government we have a far better foreign policy than anything the Liberals Martin seems to pine for had offered.

Hi Patrick...I'm not going to defend the Liberals because for example in the case of Omar Khadr both them and the Conservatives are complicit.
But the fact is on most issues the only leaders who have been onside with us are George Bush and Howard in Australia. And both of them are gone.
We have a very good department of Foreign Affairs. We used to have a very good and distinctive reputation in the world. And both Liberals and Conservatives could do better.
And ANYONE could do better than Harper... :)