The Recession Lottery and the E.I. Nightmare 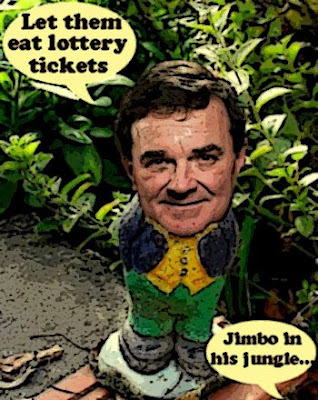 Holy Garden Gnome....where's a watering can when you need one? I see that our incompetent Finance Minister Little Jimbo Flaherty says the dismal economic news doesn't surprise him.

"This is to be expected as we go through the depth of the recession. But we've been through this before in Canada ... we know we will come out of this...This is a difficult time, it's going to be a difficult time this year. We anticipated that..."

When in fact Stephen Harper and his Con klowns didn't see it coming. Have no idea how bad it could get, or how long it could last. And because they're jungle neocons don't care how much pain it could cause. Even if that pain gets really bad.

The recession of the 1980s, for instance, began in July 1981. But the unemployment rate didn't reach its 13 per cent peak for another 18 months.

In the Great Depression, Canada's jobless rate didn't peak at 20 per cent until 1932, four years after the crisis began.

Which means that we could be facing years of mass unemployment and misery in a country without a proper safety net. Where so many Canadians are already so desperate they're hoping that a lottery ticket will save them.

With jobs continuing to dwindle, experts say lotteries, sweepstakes and other games of chance will cross the threshold from casual entertainment to last resort as more Canadians like Gonzalez desperately seek economic salvation.

How this could happen in my beautiful country I'll leave for another day. All I know is that the first priority for any Canadian government is to ensure the survival and the dignity of suffering Canadians. And right now that means overhauling our rotten E.I. system that condemns Canadians to poverty and humiliation.

Which is why I'm so happy to see the NDP propose this.

"Statistics show roughly 60 or 70 per cent of people who don't have a job aren't eligible in the system as it currently stands. That's a huge amount of people.

"If anything, we should be making it easier for people to qualify. We've paid billions into this fund [and] at the same time the government has made it harder for people to collect the benefits they've paid into."

And I only hope the Liberals will support this measure because if they don't they will wear this shame FOREVER. They helped create this E.I. nightmare so they have a moral responsibility to help put it back together.

And as for the Cons...if their foul alien ideology prevents them from doing the right and Canadian thing...then just bite the bullet and bring them down. And let Canadians decide who wants to protect them and who doesn't.

Who wants to turn Canada into a neocon jungle and who doesn't. At a time when unemployment and the E.I. nightmare could happen to ANYONE.

We're going into a dark tunnel and nobody knows how dark or how long it will be. But for me the proverbial light in that tunnel remains the same: a better, more human Canada with no time for Cons and their cruel, rabidly ideological policies.

Defeat them, crush them, finish them off...
Posted by Simon at 6:03 PM

I'm not sure that the NDP are anany better answer than any other of the clowns in Ottawa but the EI system is sure screwed up. See my series of posts, the latest of which is here - http://ruralcanadian.blogspot.com/2009/03/ei-part-time-rip-off.html

Hi Rural... I read your post and it was excellent. I'm sorry you are in that situation. But good for you for sharing your story...like my friend Scott at tattered Sleeve is doing...so more Canadians know what is really going on out there.
I'm pretty non partisan...anyone but Harper... and I wish ALL the parties had the decency to do the Canadian thing, because this EI system seems designed to screw the unemployed rather than helping them. It's an absolute disgrace and it needs to be completely overhauled and ASAP.
Good luck and thanks again...

Rural wrote; "I'm not sure that the NDP are any better answer than any other of the clowns in Ottawa..."

I am. They are *light years* better than the Harpokons and the Hapokon-lite "Liberals" under Iggy Thumbscrews.

BTW, Simon, Alex Atamanenko is my MP, and he is the *best* (except for maybe Bill Siksay, who is rapidly becoming my new hero!)

Simon: On saturday I attended a little conference at UVic caled: "Remaking the Economy through people's eyes. Put on by BC Institute for Cooperative Studies and the BC Community Economic Development Network.
It wasn't just about BC tho.
Dr. James Tully told us people should have placed their investments in those little micro projects. You know where they give a bit of money to help some African women in some place in Africa set up a project, and ofcourse other projects throughout the third world. They all made profits this year.
In Canada, workers' coops were also showing fabulous returns, except for those that didnt reinvest in their own project and followed the standard economic advise of so called "smart "investment by diversifying their profits into the big picture and ofcourse had to face a loss. Those that said to heck with that and took the "risk" of putting their money back into their own project are way ahead.Same pattern with coop housing projects.
And those little credit unions that could are chugging along very nicely. Ralph Nader has an article out on this too.
Small is beautiful and...
lucrative!

Hi 'Berto... I agree with you...the NDP is better certainly on this issue and a lot of others. But I think Rural is just pissed off with all politicians. And after what is happening to him who can blame him?
Still the facts remain...the Liberals helped destroy EI in the name of slaying the deficit. And the cruel Cons would kill it off altogether if they could. So if the NDP suggests that the waiting period should be eliminated I'm with them.
You're right about Bill Siksay...he's great. I just read a post on his blog about the recently departed Scott Symons and I thought it was excellent.
I also be jealous about you having Alex in your riding. But then I got Olivia... :)

Hi Oemissions...wow you amaze me with all the things you do to help make a better world. Yes small is beautiful and more human and better for the planet too.
As you once said we need to see this recession as an opportunity to remake the world. And it has to start from the ground up.
The wretched greedy people who brought us into this dark time would like us to return to the old days.
But I say we don't.... :)