Harper and the Monster behind the Mask 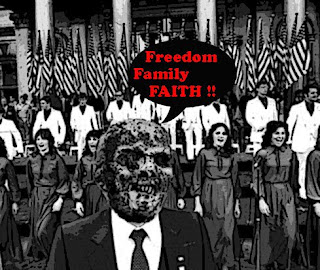 Ever since I heard about Stephen Harper's speech to the faithful at Parson Manning's Con Conclave I wanted to get hold of a transcript. The one the PMO refused to provide.

So I could see what other crazy things he said the day his mask fell off.

Now thanks to David Akin I got what I wanted.

So I can add this to my long list of deeply disturbing Great Monster Leader quotes:

" Instead of subsiding court challenges by left-wing fringe groups we are cracking down on criminals and providing support for victims.

File it under Fascist Nonsense...because that's what it is. And make a note in the margin about the way he said it. Like a gleeful bully bragging about his victims...and appealing to the beast in his rabid base.

And how about this quote?

Imagine the bloated bureaucracy that a daycare program would have spawned, and of course how little daycare would have grown (?) (inaudible). (mild laughter)

Don't you just love the laughter? Isn't he disgusting? Hurting parents and children and JOKING about it?

You know the photojournalist Tom Hanson took a photo of Stephen Harper during the last election campaign that I will never forget. 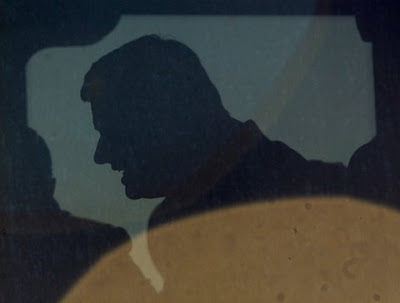 Because to me it symbolizes the monster behind the mask.

The one they don't want us to see. The coarse foulmouthed guy who swears all the time. But likes to pose with kittens.The brutish right-wing extremist and theocon who wants to change Canada beyond recognition.

Tragically, Tom Hanson died the other day of a sudden heart attack. He was a brilliant photographer. But that photograph will always be my favourite.

Because after that shot....and that monstrous speech.

I was pondering and pondering the shadow, trying to pin down what in my mental rolodex that the profile kept evoking.

At risk of showing my age, the answer finally went 'bing'. The animated Blue Meanie from the Beatles flick.

Must be why he decries the drug message in the band's songs and fears having to explain it to his son.

Hi Niles....the Blue Meanie? I don't know the character...but I LOVE the name... :)
I love everything about that shot...from the composition to the colours. When I stare at it sometimes resembles a Rorschach spot...one moment it's the Godfather...then it's an island of idiocy...or a monstrous evil blob... :)
Seriously though everyone within shouting distance of the PMO says Harper is always turning the air blue with cuss words. So I like to see the shot as showing the coarse political thug behind the ridiculous mask of a hockey dad.
Bragging about how he SHOWED them... how he FUCKED them.Howdy harrr harrr harrr.
May the political gods return the favour...

Ok, now I feel old. In any case, here's a website of "The Yellow Submarine" with pics. (sorry for the length of the link)

The Blue Meanies and their Chief are the villains In Charge. Note how they even have blue sweaters.