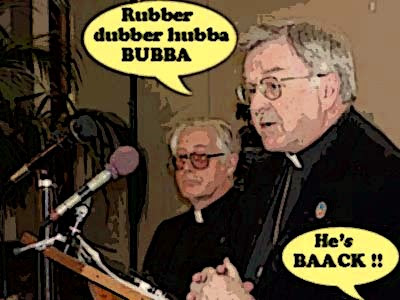 Uh oh. Just when I thought I'd seen and heard the last from the wacky Bishop of Calgary Fred Henry...he's back in the news.

And as wacky as ever.

Three years ago he was making a bigot monkey out of himself suggesting that gay people should be arrested.

"Since homosexuality, adultery, prostitution and pornography undermine the foundations of the family, the basis of society, then the State must use its coercive power to proscribe or curtail them in the interests of the common good."

Now he's making people with AIDS pay for his crazy war on rubbers.

Gawd. I hate having to criticize religious extremists all the time. Because just thinking about the shite that comes out of their pieholes makes me want to vomit.

But what ever happened to good old fashioned morality? You know loving your brother and your sister. And trying to prevent them from getting sick.

Oh well....I guess loony Freddy knows which side his holy cracker is buttered on.

So all I can do is give him my Simon salute. Press the wingnut emergency button.

And dream of the day when all these inhuman religious fanatics can be bagged...preferably with a giant rubber.

Wouldn't THAT be a lovely feeling?

Good for the Catholic teachers for helping the poor women and children of Africa who are living with HIV/AIDS.

But as for the nasty bigot Bishop, he should be ASHAMED...
Posted by Simon at 5:21 PM

Under Bishop Bigot, apparently, Catholic priests who rape chldren get a free pass. They aren't mentioned in his "coercive" rant against gay folks.

Hi Mapko...I don't know what Bishop Nasty has to say about those pedophile priests. But I just wish that he would put his humanity before his ideology and help people instead of insulting or hurting them. But that's what religion has become these days. I'm an atheist but the good religious people deserve better...

This article is published in the Summer 1998 Issue of Open Hands, Resources for Ministries Affirming the Diversity of Human Sexuality