Why I'm Not Apologizing for my Gay Marriage 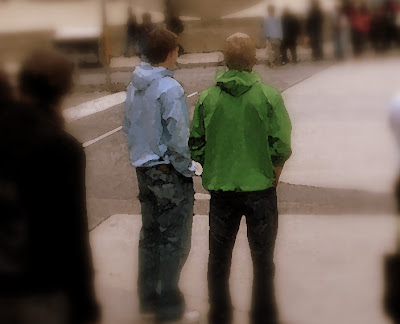 Oh boy. It feels like Spring in the Great White North.The ducks are quacking in the pond. Lovers are everywhere. I'm under renewed pressure to marry Sébastien.

Lordy. Soon there won't be any places where you CAN'T get married.

But never mind because now I've got another excuse not to get hitched: I don't want to have to apologize to the bigots.

Because can you imagine ME apologizing to a homophobe?

And besides if that excuse doesn't work I've got another.

The guy who will be the best dog at my wedding ....if I ever get married.

Isn't feeling his usual self... 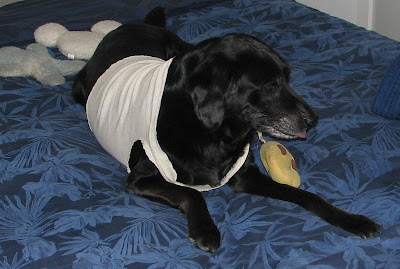 He had an operation to remove a small lump on his belly. He's fine. I'm still recovering.

But he won't be able to wear a tuxedo for at least another two months.

Gawd. When you hear wedding bells ringing in your head, is that a sign of insanity...or a sign of things to come?

Sébastien is the chosen one. Kerouac is a trooper. Portia is fabulous.

A couple of months... that's still in time for a June wedding, Simon!

Anything you're not telling your faithful readers? ;)

PS - Try not to worry too much about Kerouac, he will be fine. One of my other dogs was a regular "lump machine", every 2 or 3 years he had to get some renegade lump taken off his furry body. Kerouac will be ready to don his tuxedo in no time!

Sending huge healing vibes for Kerouac, Simon. Like JJ said, he'll be ready for his best duties in no time. And I will certainly fill a glass with decent champagne to toast your wedding.

But I should warn you to expect an unusual wedding present from Father Alphonse de Valk and his Catholic Incite.. perhaps a bottle of antibiotics or something.

With the blessing of taxpayer subsidized Heritage Canada grants,
he publishes his hate propaganda venom that gay marriage is an act of mockery of God, an unnatural act, a begetter of disease, a source of death, a deplorable distortion. (But Priest boinking little children and their Bishops keep moving them around to share their "blessings" with as many children as possible is their Godly way of spreading the faith?)


Perhaps we should be asking our members of parliament why our taxes are being spent do promote this kind of homophobic hate which results in dicrimination, violence and even murder. Mabye Jason Kenney should ban BeenaNazi Ratinger from entering Canada?
That would be a great start!


Best wishes for a long and joyful life together and prove the hatemongers wrong.

Hi JJ...heh heh heh...or July ;)
Seriously though I deny it. And I'm blaming it on my older brother for putting ideas in my mum's head. You know he's working on his THIRD marriage ahem...so he's obviously hoping I'll get married and then divorced to make him look better... :)
And besides you'll probably remember that I've talked about it before and then chickened out. So unless Seb says we are going to hold the reception at the original Ben and Jerry's I've still got time.
As for Kerouac thanks for cheering me up. It WAS horrible. I felt so guilty leaving him at the vets. I wanted him to have a general anaesthetic so he wouldn't remember anything. But they told me old dogs sometimes don't wake up. So I told the vet OK give him a local and put me to sleep. But he didn't. The good news is that he's making a very quick recovery. And of course Florence Simon is spoiling him rotten....

Hi Beijing...thanks for the healing vibes. I'm glad to say they're working. I don't know if he'll make a good best dog...but in a week or so the squirrels better be prepared to run for their lives...
As for the wedding hold the champagne. I'm still a free man. And as I told Seb the other day...who said twelve years of courting me is enough? Do you really think I'm THAT easy? ;)

Hi anonymous...thanks for the best wishes. They're always good even if I don't get married. :)
As for Alphonse please don't mention him again. I don't really care what he thinks about ANYTHING.
The way I see it we all only get to live once. So if I can be happy and kind to others and try to become a better person that's good enough.And the Christian haters...who distort the words of Jesus...are their own worst enemies....

MS, you may be the wild one, but honestly, don't you like having the option of being just another ambushed bachelor (not 'confirmed bachelor')who can be dragged kicking and screaming down an aisle in front of witnesses for purpose of wedding your beau?

I'm way too normative, I'm sure.

Hi Niles...my resistance to getting married is probably more superstition than anything else.
I feel it might jinx a perfect thing.
However...the idea of Sebastien grabbing me in a head hold ...like the day we met...and dragging me kicking and screaming down the aisle strikes me as rather attractive.
I'm going to have to think about that one... :)

hi,simon!!!r u really gonna marry?I still remember last time (maybe a year ago)you talked about your marriage,I thought it might be a while before...anyway ,marriage is a promise for eternity and choose it on a lucky day(maybe in may),btw,you owe me a PIC(I'm quite busy these days but I still remember it...LOL)so a wedding photo sounds marvellous@@

Hi ur Merit...well don't be firing off some of those wonderful Chinese fireworks yet... :)
As you mention I have thought about it before. It is nice to be able to live in a country where you have the choice. I wish every gay person in the world had that choice. But that doesn't mean I HAVE to get married. We both come from the province of Quebec that has the biggest number of common law couples in the country.
So we have to overcome quite a tradition.Heh heh heh...
As for the photo... are you telling me you want a picture of me in a wedding dress? ;)