The ReformCon Agenda to Destroy the CBC 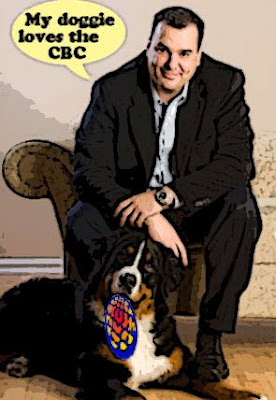 They say James Moore is one of the better Conservatives. He's pro-choice and for gay marriage. And anyone who loves dogs can't be ALL bad.

But when it comes to the CBC he's the designated ReformCon pitbull....and his big head might as well be buried in its belly tearing at its guts.

Because when it comes to the CBC..... he's a good little ReformCon doggie listening to his master's voice.

Regard the horror of the hidden agenda.

And isn't this interesting?

Harper appointed Hubert Lacroix president of the CBC. Lacroix, who contributed $1,000 (the maximum legal amount) to a Conservative candidate during the previous general election, is a Montreal-based mergers and acquisitions lawyer. His only known broadcasting governance experience has been as executive chair of TeleMedia during the period when that family–controlled company sold off its broadcasting properties some years ago.

So the Cons appointed a Con supporter as President whose specialty is selling off buildings. You don't think they were planning to gut the CBC before the recession struck....and are now using that as an excuse to finish it off?

Or reduce it to a crippled, second-rate service. 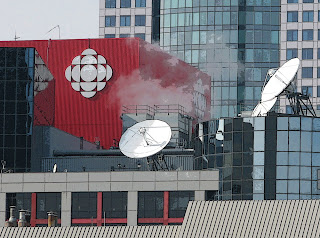 You know I have my problems with the CBC. I think it sometimes tries too hard to be a commercial network like all the others. But then I didn't realize until recently how much it depends on ads....because it doesn't get enough money from the government.

And for all its flaws, it's a great Canadian institution. One of our great success stories... like medicare. It's an institution we need in a big and divided country like ours. So we can know each other better.

Which is why I'll NEVER understand why some Canadians seem determined to tear down what we have built up together. Or why these alien Cons seem to hate Canada so much.

But if this death by a thousand cuts continues much longer, one day we'll all wake up in a shrunken ugly country we don't recognize anymore.

To love our beautiful Canada is to HATE these dirty Cons.

Defeat them, crush them, finish them off...
Posted by Simon at 8:27 PM

The CBC had a program called This Hour Has Seven Days. Everybody watched it and the political discussions on it were riveting.

Unfortunately, the program caused much embarassment to Diefenbaker and his Conservatives. The days following had lively debates in the House and the PM and the cabinet having to answer very pointed questions was not easy for a populist PM like Dief.

From that time to now, EVERY Conservative prime minister has tried to kill off the CBC. None of them has succeeded because they've not been in office long enough to make the killing-off happen. Moreover, they know the public wouldn't wear it.

Could Harper be setting up Moore to fall on his sword with this affair? He almost died on the Cadman affair and Moore is rather progressive. Harper doesn't like Moore and I'm sure he'll be glad to get rid of him via this CBC business.

I really like News World, it's documentaries and some of the sitcoms of CBC. It is a great deal more Canadian than CTV will ever be. Harper, for years has hated the CBC. It is sad how much Harper is doing behind our backs. He has to go, or Canada will never be the same again, and it is getting worse every day.

You seem to be implying that anyone who donates the maximum to the party he supports should be ineligible for any goverment appointment.
At least if the LPC ever get into power that won't be a problem since they can't get their supporters to donate!

Hi Torontonian...one of the things I hold against the CBC is that it is so afraid of courting controversy it's too boring and bland. I would like to see it provide more take a chance programming and more animated discussions between Canadians. It would be cheaper than some big fancy productions but I think it would be really popular. I agree that Conservatives don't dare kill it...until they get a majority. But what I fear is a slow death of a thousand cuts. When in fact if we want a classy public broadcaster....one we can ALL be proud of...we have to be willing to pay for it...

One more thing Torontonian...I also think you might be right about Moore. Harper is such a sadistic bastard I'm sure he would relish the opportunity to have a moderate Conservative like Moore gut the CBC...
What a guy. What a monster...

Hi Cari....as i mentioned in my post I really can't understand why the Cons hate the CBC so much. When I read the comments in the Globe about the CBC they are so full of irrational hate they depress me.
We are slowly being hollowed out, and we need to PROTECT our Canadian institutions and make them better not destroy them.
And needless to say I agree that Harper has to go and the sooner the better... :)

Hi Geordie Tom...not necessarily. That's the way the system works. When the Libs are in power they also appoint their supporters. I do find it regrettable though that the President of the CBC should have more experience selling real estate than broadcasting.
It would be nice if the person who got the job didn't owe anything to any party...