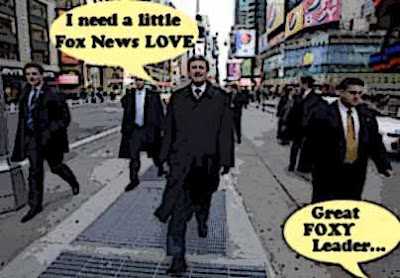 Well I see Great ,, Loser Leader is off to New York City again for an interview with Fox News.

Prime Minister Stephen Harper will travel to the United States this weekend for another series of American media interviews, including one with the Fox News network that disparaged Canadian soldiers last week.

Can you believe that ? I wonder when Harper begged them for an interview. Before or after these guys came home? 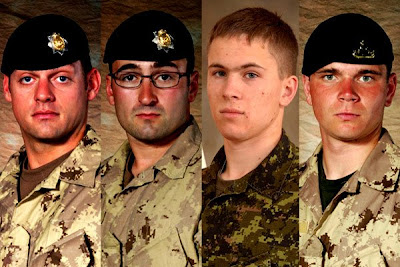 Are these Cons shameless or what?

But then what do you expect ? They have always worshipped at the altar of Fox News. They prefer THEIR news to OUR news.

Whenever some right-wing RepubliCon comes on and screams through his asshole.... they fall to their knees and kiss the screen. Or lick it.

Because they HATE Canada and our beautiful Canadian values so much.

In fact Don Newman said tonight that the Con mouthpiece Kory Teneycke once told him the CBC should be more like Fox News.

But our poor little Canadian institution didn't do that and you know what happened...

And if you think these cuts won't end up KILLING the CBC....you better read this story.

Meanwhile, if the asset sales don't go through, all bets are off, added Lacroix.

"We'll go back to the drawing-board and look at all of the services," said Lacroix. "This is like pulling a thread on your sweater. If you pull on something, the whole sweater comes (apart).

Today I took this shot of the Glenn Gould statue in front of the CBC building. 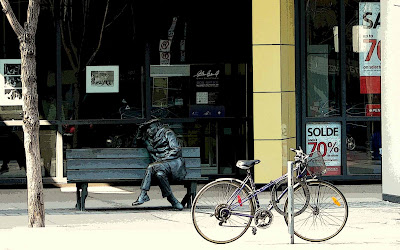 In a little CBC boutique next door they were selling stuff at 70 per cent off. It was so sad. You could see the writing on the wall.

But now at least we can let this Bush Con government know how we feel.

We are CANADIAN. We hate right-wing American assholes who put down our soldiers.

Stephen Harper is a Fox News wannabe. He will never be Cheney or even Bush. He is trying SO hard. Be kind Simon, let the poor man try.

Aitken,Gzowski,all the old greats whose voices filled our cheery kitchens on a cold winter morning say "thank you "simon.
Even Maggie Muggins is wondering what's going on?

THE PM MR HARPER MUST BE A FRIEND
OF GREG GUTFIELD.

Actually, I don't like the use of shameful in the headline.

Rather focus on Harper's shamelessness.

The French have a term for him:

Hi Jymn...be KIND to Stephen HARPER? *Gasp* Warning warning. Database error. There is no such chip in Simon's brain...
But you know I just had a cheery thought. Might he just be auditioning for a job in some Republican think tank?
Warning warning database COLLAPSE...:)

Hi Oemissions...I have to admit I've only heard of Gzowski. But what's happening to the CBC is very sad. You know if we want to be a first class country we should have a first class broadcaster. Especially when we're inundated by American culture.
But it seems no matter what we try to build up in Canada...others try to tear down.
It's so depressing. It's lucky we're so big and beautiful or I might give up... :)

Hi anonymous...I think Stephen Harper has a lot of personalities from Mr Pretty to Mr Nasty.
But all I'm asking is that these Cons at least be consistent. They're always going on about supporting our troops, but when the Fox network insults them...and Great Pathetic Leader needs a friendly ear...they conveniently forget that.
I mean REALLY...

Hi Torontonian...yes you're right that IS better. In English and in French.
Now all we have to add is "maudit con" and it should be PERFECT... :)