Andrew Scheer and the Curse of Doug Ford 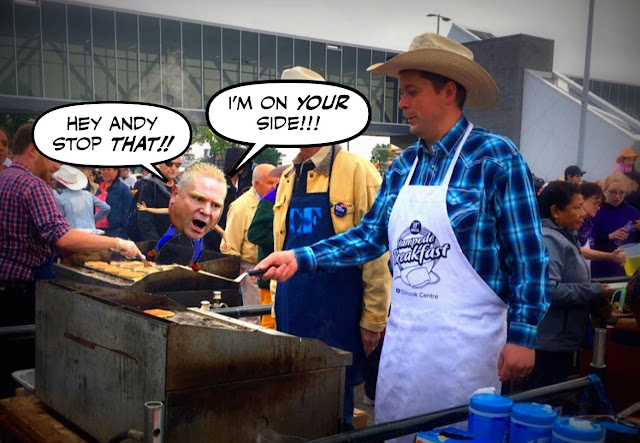 I see Andrew Scheer has been playing cowboy, and flipping pancakes at the Calgary Stampede.

And although I'm sure Scheer was happy to be half a continent away from Doug Ford and the stench of Con corruption, he must also be hurting inside, and increasingly desperate.

Just a few weeks ago it seemed he was heading for a crushing Con majority, and on the verge of being able to impose his deranged Scheeria law on Canada.

Now not so much. 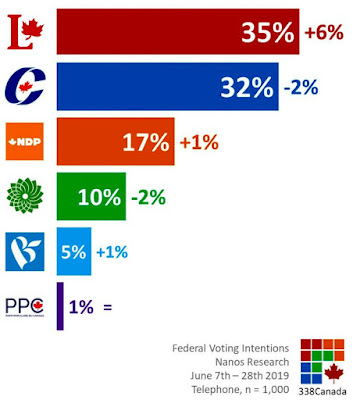 For in the latest NANOS poll, Justin Trudeau and his Liberals have regained the lead.

And they are essentially tied with the Cons in this latest Abacus poll. 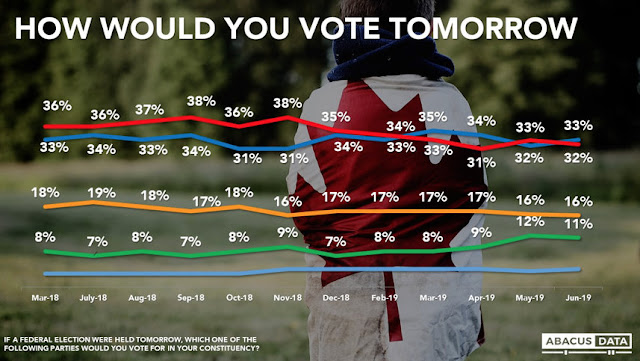 And although the numbers are too close for comfort, and this is depressing.

When will older Canadians understand that the Cons who want to carve up medicare are NOT their friends? 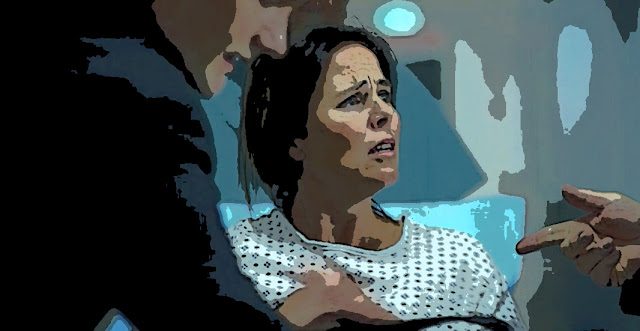 Do they really want to end up in some dingy welfare hospital, wondering where their Canada went?

Considering where Justin Trudeau and his Liberals were just two months ago, this is more good news... 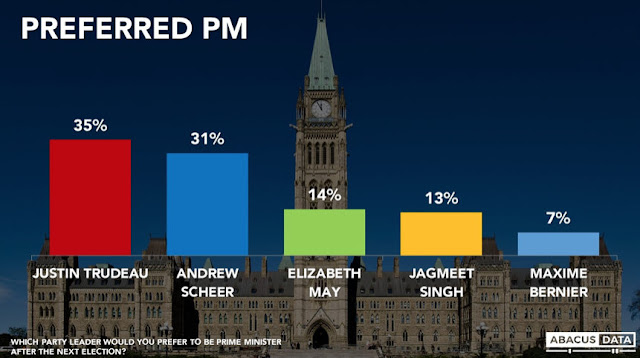 For it suggests that should the Scheer Cons get anywhere near winning the election, NDP and Green voters would likely move to support the Trudeau Liberals.

While also suggesting that if Maxime Bernier becomes a few points more popular he could start seriously splitting the Con vote, and make any kind of Scheer victory impossible.

But this is the result I like the best... 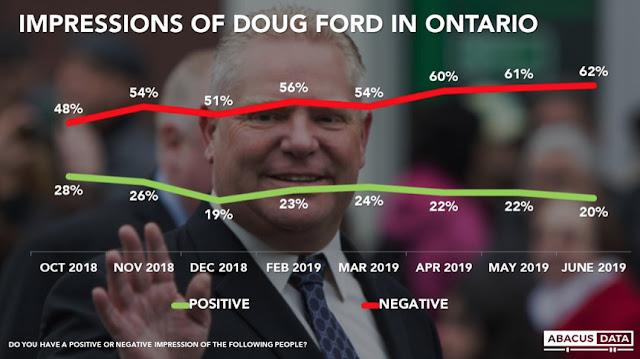 For it shows just how unpopular Doug Ford has become. And after the way Scheer has rolled in the hay with him, many people are finding it increasingly difficult  to tell one from the other.

Oh my God, is there a full moon tonight? Scheer Nonsense is morphing into something hideous ... pic.twitter.com/0VvN6Zz6M6
— Oooh, Canada ! (@CanadaOooh) July 2, 2019


So I predict the deadly curse of Ford is going to follow Scheer all the way to the election... 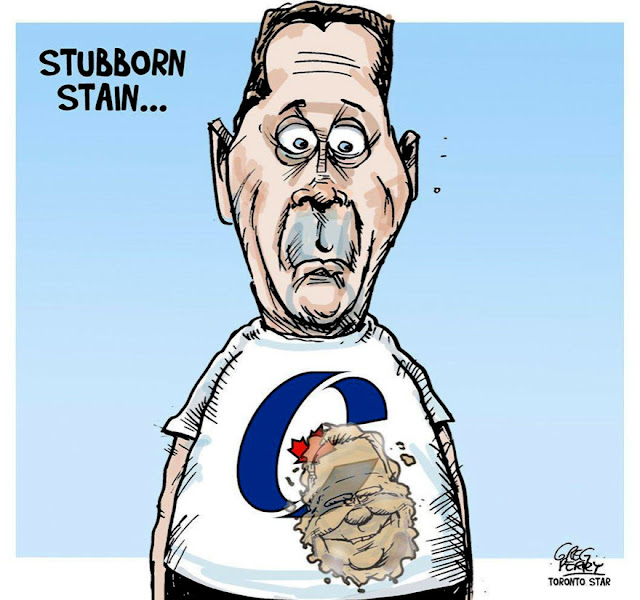 For with just 106 days before the election the main lessons I take from these latest polls are these:

We need to start thinking seriously about strategic voting.

We need to make it impossible for Scheer to escape the curse of Ford.

And we need to hit the Cons harder than we ever have before, until this monstrous clown circus is finally over... 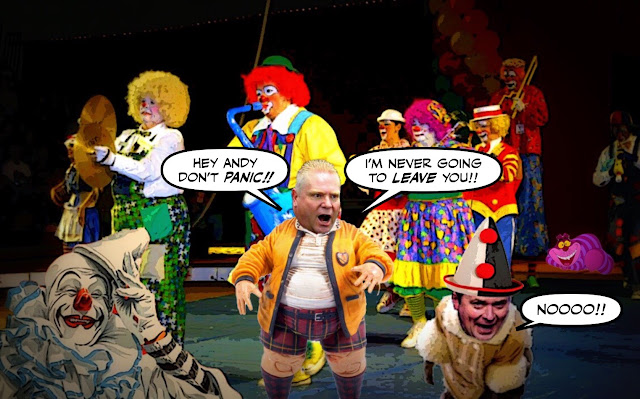 And 14% of that 88% would rank Faith Goldy as second choice. But I digress.

Too early to count any chickens, but encouraging momentum to be sure, particularly with three months and change still to go. Poll Tracker now has the average gap within just 10 seats, and 338 has it even closer. But I do worry about vote-splitting and don't trust May for one minute. She'd have to be deluded or just hungry for power and attention to think that aiding the Con climate denialists would get the country any closer to achieving any environmental goals at all. She's out at the Stampede in the most anti-Green province in the country, bashing Trudeau and Bennett on Twitter in hopes of siphoning the indigenous vote. I hope her recycled manure party's support collapses as the election nears, just like it usually does. Canada doesn't need its very own Jill Stein short-circuiting the wifi and messing up the works.

Like you said, strategic voting and turnout numbers will be crucial and with any luck, Trudeau pulls off at least a minority government. Even Con hack John Ibbitson is hinting at the distinct possibility of this happening. Now is not the time to get complacent, of course. Polls don't vote; people do. But I really am hoping for a miracle after all this, so that two days after what would have been his dad's centennial (which is also Xavier's 12th birthday) he can go home with Sophie, Margaret and the kids, have a little champagne and say "because it's 1972."

BTW: OT but FYI, the Rebel/Ruble trolls are online right now trying to implicate Trudeau in the Epstein papers. Both father and son, in fact. Be on the lookout for a bullshit Pizzagate conspiracy to infect social media soon. Even though signs point to the likelihood of the "well-known Prime Minister" being a scuzzball like Tony Bliar, Bunga-Bunga Berlusconi or Nutty Beebee. Then again, if it was Skeevy Harper, the "family values" Con heads would explode.

Most of the Epstein parties/orgies took place in the 1990's and considering the attending age profiles it is a little early and late for the Trudeau's to be implicated. Dinky Donnie was connected to the crowd and one of the minors tried to implicate him in a law suit but as all things Donnie the voluminous amount of smoke tends to obscure the actual fires. This one has been smoldering long before he became president. Interesting that Acosta ,the deal making DA , is now part of current White House gang .... the Cons inhabit a small small world.

The Epstein meme has kickstarted a vicious Schmear campaign being amplified by Jeff and Hamish's pizza-bots. Now they're going after Justin over some disgraced charity worker in Nepal named Peter Daiglish, and that Chris whatsisname hockey player he shared a dorm with at McGill. Spreading photos of a random selfie he took with Kevin Spacey (which Bono was also in). Pointing fingers that he "shared a platform" with said predators to deflect from Andy's credible affiliations with Faith Goldy et. al.

It sickens me to no end but doesn't surprise me, since this kind of lowlife character assassination is part and parcel for Scheer (and/or anyone he "shares a platform" with). He started his career accusing Lorne Nystrom of being sympathetic to child pornographers, after all. But since everything a Con says is projection, perhaps there's something of Andy's on Hamish's hard drive that he doesn't want us to know about???? I'm just asking Fair Questions™... inquiring minds want to know...

Hi Jackie....The hysterical way the Cons are behaving only tells us they are desperate. It's too early to put on our party hats, but the trend is very encouraging, Still to come are some tax cuts to grease up the greedy, and a pharmacare plan that can be played against the Scheer/Ford plan to carve up medicare. I don't know if Trudeau will manage to win a majority, but it will be pretty damn close...

Hi Jackie...I just heard a reporter say that although Ford is now in Calgary, Scheer is making sure not to be photographed with him. Can you believe that coward? He actually thinks that if he can keep
Ford hidden until after the election, people will forget that he is planning to do to Canada what Ford is doing to Ontario. He must think Canadians are fools...

Hi RT.... I haven't read the Epstein story yet, it disgusts me too much. But now that Jackie has let me know that the Cons are trying to implicate Justin Trudeau I suppose I'll have to read up on it. As you say, the timeline is all wrong for Trudeau, but as for the pervert Trump I'm hopeful that he will at least be tainted by this latest scandal. I can't believe what a swamp we've been living in since that hog came to power, and I dream of the day this sordid nightmare is finally over...

If you have the stomach for it, look up Henry Makow, he's a demented conspiracy theorist with a PhD from U of Toronto (like Jordan Peterson, another crank of similar ilk -- must be something in the water there). Ironically, he invented the popular 1980s board game called Scruples, yet doesn't seem to have any at all. He's published a series of perverse blog posts about Pierre and the "Illuminati," complete with libelous accusations of abusing his own sons, which have been fodder for the Con lunatic-fringe Pizzagate track for a long time. Now they're gaining traction again on social media because the Rebel/Proud/Russia bullshit machine is desperate for Trump/Epstein fodder they can project onto (a) Trudeau (dead or alive) in an election year.

I feel like the whole world is on drugs.

FYI: Late evening polling update. Not (yet?) on their website.

OT but important news: Jean Chrétien hospitalized in Hong Kong. Get well soon, scrappy little guy from Shawinigan. Whatever illness has befallen you, give it a good strong "handshake."

I hope he is okay. I have always had a soft spot in my heart for JC since the incident in the park. I do not even remember the name of the park as I lived in Hull, about 500 metres away and it was just “the park by the river”.

Nothing like having a PM throttling an protester to impress us hoi polloi.

Update: He's undergoing treatment for a kidney stone. With any luck, maybe once he heads over to recovery, he'll throw it at Xi Jinping. ^_^