Donald Trump and the Madness of the Dictator 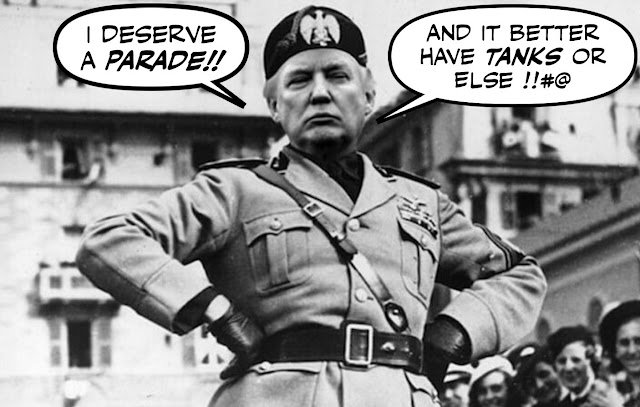 As we all know Donald Trump has a special attraction for dictators. He likes to hang out with them, and share intimate moments with them.

And who can seriously doubt that he would LOVE to be one?

So when six months ago he tweeted out this announcement:

His terrified White House flunkies scrambled to pleasure him. 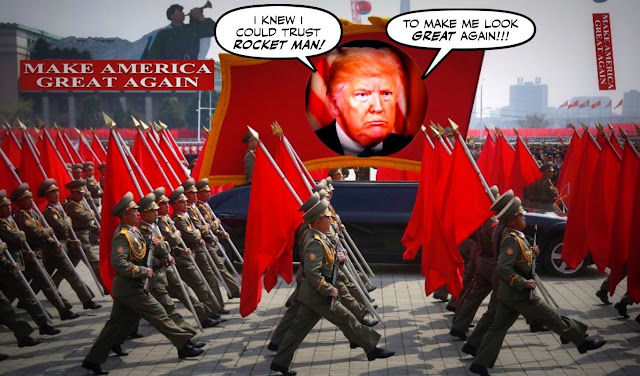 So he will get his parade. It will have tanks, surrounding the Lincoln Memorial, and much much MORE!!!

The tanks will join an airborne display of the nation’s firepower, including a flight of Air Force One over Washington and a performance by the Navy’s Blue Angels jets. Mr. Trump, who is to speak at the celebration, has requested that the chiefs for the Army, Navy, Air Force and Marines stand next to him as aircraft from each of their services fly overhead and their respective hymns play on loudspeakers.

“It’ll be like no other — it’ll be special, and I hope a lot of people come,” Mr. Trump told reporters in the Oval Office. “We have some incredible equipment, military equipment, on display — brand-new. And we’re very proud of it.”

A show starring HIMSELF, in a hijacked version of a Fourth of July celebration.

President Donald Trump has hijacked what for decades had been a nonpolitical Independence Day celebration on the National Mall, packing his ticketed-event speech with political appointees and Republican donors.

And needless to say the historians are alarmed.

Ruth Ben-Ghiat, a New York University history professor and expert on fascism, said Trump’s need to display military hardware is a feature of authoritarians throughout history. “He needs to colonize our lives. He needs to colonize our public spaces,” she said, adding that it was “dismaying” that the Pentagon this year failed to thwart Trump’s impulses. “The military has been domesticated. I think the will to resist him has evaporated.”

And judging from this video he ran on his Twitter site recently, I think we should ALL be alarmed.

But there is some good news. As Jennifer Rubin writes, it is the perfect reminder of why Trump must leave.

What should be a commemoration of human rights ("All men ... ") and the unwavering faith in the rule of law and in democratic governance in Trump’s hands becomes a caffeinated Armed Services Day. He manages to transform a holiday about the greatest experiment in civilian self-government into a garish military Mardi Gras.

This is why a lying braggart and ignorant narcissist must go. He defiles and deforms everything he touches, putting our American creed and values in jeopardy. We long for a normal president who will allow us to return to daily lives not soured by 24/7 politics and not forever on edge that he is up to some new horror.

For it will be a fascist freak show... 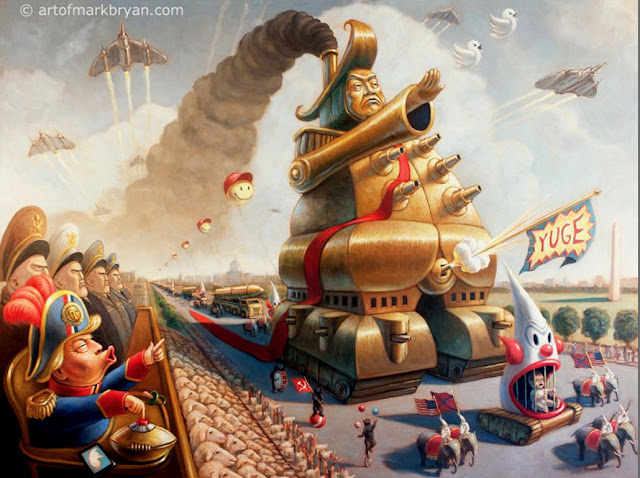 Surely most Americans will finally realize that they are dealing with a deranged would be dictator.

One who should be in a cage, instead of those poor kids.

And hopefully that will happen sooner rather than later. 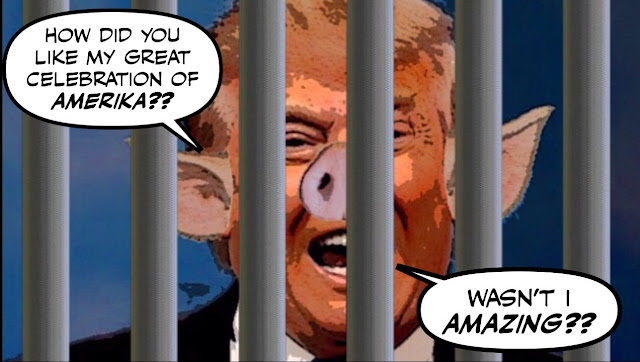 Labels: Donald Trump. Fourth of July Parade, The Madness of Trump, The Rise and Fall of the Orange Oaf

You Canucks better keep Trudeau even if you have to call off the election and shove Scheer in Harper's closet for the next decade. I guarantee you if this motherfucker (daughterfucker?) declares marshal law, a lot of us Yanks are going to be going on a permanent vacation up north.

That being said, even if you don't, we're all going to run to Justin's personal residence and hide out in his garage anyway. Or Sacha's (Pierre's Art Deco house). Or Margaret's apartment. We promise not to scratch the Mercedes. Heck, if Canada itself goes fascist, the whole lot of us will just shove them in a Griswold station wagon, grab a bunch of you decent Canucks as refugees and appoint the Trudeaus the royal family of the micronation of Sealand.

At this point, why not? The world is in a state of Trump-induced lunacy and nothing makes sense anymore anyway.

How fitting that the orange ape would have a spectacle more appropriate for a banana republic than the world's supposed largest democracy. The only thing missing will be his buddies Pooty and Lil' Kim Dung Spun. I did hear that a permit was granted to fly the Trump baby blimp and with a mass of protesters mixing with the Trump zombies, it could reignite the civil war. What a sad, pathetic joke.
May God bless America.
JD

Military parades are for placebo effect as Trump slowly kills American soft power on the global stage in favor of a golden tower with high walls and deep moats. Connies are not a very imaginative lot but at least they will have something to admire from the sweat shop in the basement once the rest of the world catches on and stops giving them hard goods for fiat dollars.

MSNBC is NOT planning to air Trump's July Fourth celebration live.
Nor will I indulge in one minute of the unfolding farce on any network.
I'll do my part to ensure his audience numbers are below those of his Inauguration and last week's Democratic debates.
Oh, the humiliation.
Please do your part to help make it so.
Instead, get out and about and enjoy the gift of a fine summer day and more traditional celebration.
When you get back, after the fact, all you need to know will be blogged and jawed-to-death anyway.

What shameless and gargantuan military grandstanding it takes to convince the monstrous man-child he is powerful.
Ah, yes, the pathetic power that feels itself when it's target is children. The weakest and most vulnerable. Punishing children, even infants, and their unarmed desperate hapless parents. The power that comes with picking on the weak is something any one of us can do--that makes it pathetic, and cruel and evil. SICK.
Bully for the bastard!

Just learned a short time ago, on MSNBC, the baby blimp will be there; but tethered. Not allowed to fly.

Warms the cockles of my heart: THIS, since my reply of this morning:
"Now, White House officials and allies are wringing their hands over the risk of the hastily arranged event morphing into Trump’s Inauguration 2.0, in which the size of the crowd and the ensuing media coverage do not meet the president’s own outsized expectations for the event..."
https://www.politico.com/story/2019/07/03/donald-trump-july-4-event-1397772
Also, since this morning, ABC and CBS and NBC announce they will not air Trump's July 4th "parade"

The City of Washington DC has long had an African-American majority. Don't know much about the current demographics, but assume it now has other discriminated racial or ethnic groups as well.

Hi Brawnfire, how ironic that the baby blimp has to be tethered when the adult blimp should be the one that's constrained.
JD

A young Hispanic-American pediatrician trying desperately to care for children and babies in a jail where they are incarcerated in horrific conditions.

Conservative Bullshit Corporation is trash, and I hope it gets flushed for their betrayal of the people. They're covering this monstrosity and so are CTV and Goebbels News, even though all of the major US networks (except Fox Pravda, of course) refused to air it. That is, when they're not running two-minute-hate propaganda about Crooked Justin's Leblancgate, or why he is a softie who hugs panda bears and is therefore responsible for China putting Spavor and Kovrig in front of a... tank parade.

Meanwhile, Justin Trudeau is probably at home watching the Phantom Menace and flipping through Trivago on his phone, planning a one-way family trip to Switzerland in case things go sideways in October. Why the Phantom Menace, specifically, of all the Star Wars movies? Because CBC is airing a live reenactment of a very pivotal scene...