How The Economy Is Giving The Trudeau Liberals A Big Boost 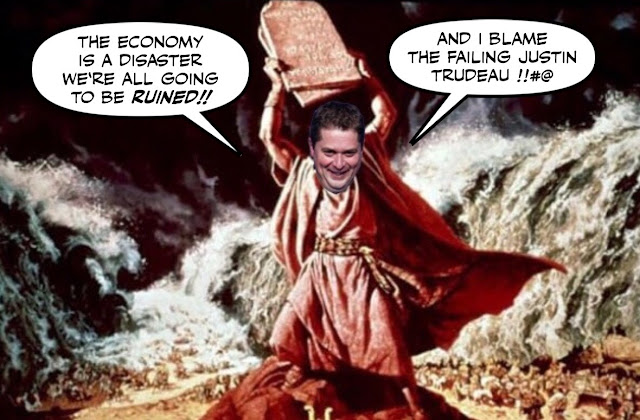 For more than two years Andrew Scheer has been screeching and wailing about how the Canadian economy is an absolute disaster.

And of course accusing Justin Trudeau of "failing" about ten times a day.

But he won't be able to do that any longer without looking even more like a Con clown or a sad little maniac. 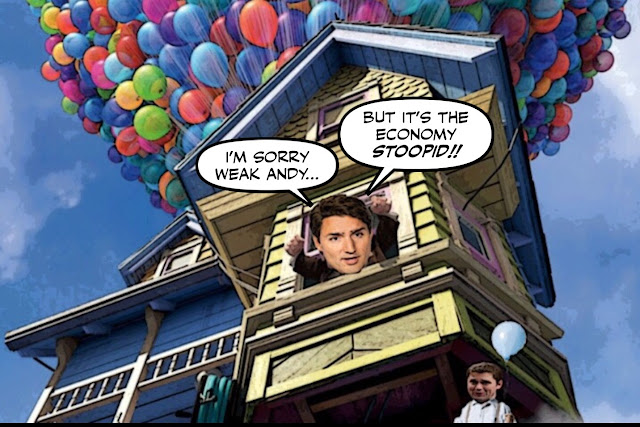 A dead heat among voters over which leader is best suited to steer the Canadian economy appears to breaking in Justin Trudeau’s favor. The Liberal prime minister is pulling ahead of his main rival on the crucial question of economic stewardship in the run up to the October election.

According to a survey by Nanos Research Group for Bloomberg News, 31% of respondents say they trust Trudeau most to promote economic growth, compared with 26% for Conservative Leader Andrew Scheer.

And to make matters worse for Scheer, despite all that negative Con propaganda, most Canadians are satisfied with the direction of the economy. 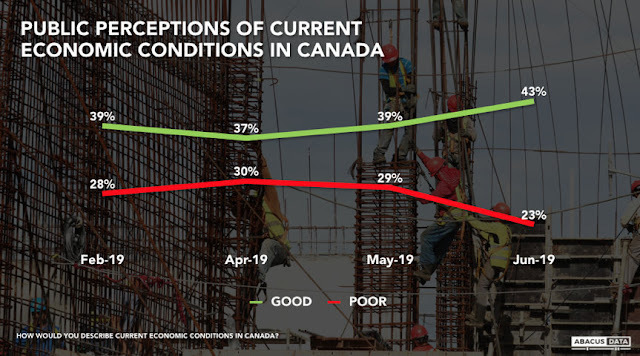 As the country heads towards an election less than 100 days away, the overall health of the economy is acceptable (34%) or good (43%), according to 77% of Canadians surveyed. These results indicate an uptick in positive sentiment over the last two months. In April the gap between good and poor perceptions was 7 points, today it is 20.

Majorities in every region see the national economy as good or acceptable, with Quebec most positive and Alberta least positive. Younger people and men tend to be a bit more positive in their feelings about the economy.

With the exception of the losers in Alberta... 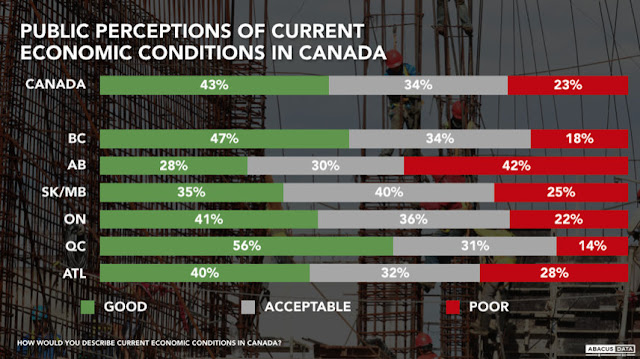 And of course Scheer's Con losers, for obvious reasons.

For as Abacus' David Coletto points out, the implications are obvious:

“Less than 100 days from the election, we see an electorate feeling increasingly positive about the broad macroeconomic trends in the country. This bodes well for the Liberals as they work to rebuild its 2015 coalition and make a case for re-election. The positive economic story is recognized by most Canadians – especially those in the Liberal voter universe.

And the Cons must surely know where they are going... 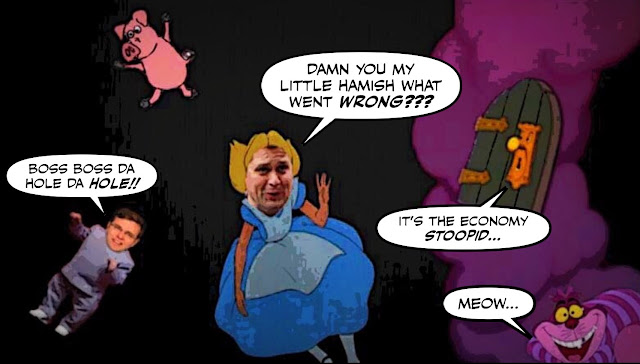 And speaking of economics, it's not just the Cons stomping their feet about Trudeau's accomplishments but the fringe loonies who want to throw a spanner in the works and siphon a few protest votes. Did you see Jagoff and Dizzy Lizzy's CETA stunt? "Press release from The Daisy Group: Trade deal bad because Justin sucks." Pathetic. Hopefully the wavering liberal/progressives of the 2015 coalition saw that for what it was: a desperate grab for relevance to undermine the government in an election year. Trudeau shut that horseshoe-politics shit right down and I was proud of him. Remember when the Cons tried to undercut NAFTA? What the hell do they think they gain by emulating their antics? It reminds me of when the Republicans brought Bibi to Congress to shit-talk Obama's Iran deal. Sabotage in no uncertain terms.

Trudeau needs to take home another majority, and this time, don't give the opposition any oxygen whatsoever. Ram that ranked ballot down their throats and castigate them to the irrelevance they deserve. I get that he's a consensus builder, but Common Ground is so 2015 and the Liberals are the only adults in the room. The would-be king-makers are acting like jesters and have proven they can't be trusted. Especially not with the Green snake lurking in the grass.

I can't wait for this populist crap to blow over and go away. So-called, self-declared leaders need to think, not just move fast and break things for the lulz and to make a point. Shame on them. Immature, juvenile backstabbers they are. The political equivalent of putting a thumb tack or a whoopie cushion on the teacher's chair. Someone ask them is this Parliament or a remake of The Breakfast Club?

with all the job killing carbon taxes gasoline is cheaper than a year ago. Math is hard weak andy/

Using this logic Ontario and the US are also doing well economically, so Pres Trump and Premier Ford should be re-elected. No thank you. Trudeau does not get credit for this (and neither does Trump and Ford). Politicians are rarely why the economy does well.

Trudeu should be held to account for broken promises.

Except Trumponomics has been a massive failure, his raging xenophobia is chasing tech jobs elsewhere, he's started trade wars with everyone who Fox News says is a threat or who pisses him off on Twitter, and companies are bailing on states that instituted discriminatory and/or anti-woman laws at the behest of Tea Party nutcases. The man who bankrupted three casinos is about to file Chapter 11 on the entire country. The only people doing well under Trump are private prison contractors, lawyers, and right-wing outrage pundits. But sure, bigliest economy ever.

Ontario under Mini-Trump is not open fuh bidness either. Drug Fraud can't even sell beer and weed, he got sued by Tesla for breach of contract in his zealous drive to wreck anything environmental-related, and the province's credit rating has cratered. Kenney is chasing the industries of tomorrow out of Alberta just like Harper put all of Canada's eggs in the oil basket. Conservative politicians are usually why the economy does poorly. Liberal politicians then have to clean up the mess.

Trudeau has done a phenomenal turnaround in spite of all the other factors outside his control, especially Trump. The Child Benefit in particular is eminently laudable. Just like Obama had all to do to rebuild after Bush and is now seeing Trump either dismantle or take credit for the things he has done. Governance by personal vendetta is guaranteed to fail, and trickling down on da people's head has never worked for anyone but wealth hoarders. I get that you don't like the man (Bernie hated "neoliberal shill" Hillary too) and Dipper partisans are obsessed with PR but quit being so negative and give Trudeau some credit for other things he has contributed to or accomplished. Geez.

Simon, I'm worried again. Gerry Butts has just rejoined the campaign and Wornout and Lisa Rat are already sharpening their knives. I have a pit in my stomach that Mario Dion is going to be the James Comey of this election. The toxic twins are no doubt still on his speed dial, and Wornout is determined to see his hate-filled vendetta succeed by feeding slime to the sycophant Con press. He doesn't care what happens to the Canadian people as long as he gets revenge on Trudeau. This man is sick.

Simon I love that picture of Scheer as Alice. After two years of bashing the Trudeau governments brilliant economic record, it really must seem like him and his Cons are being flushed down the toilet. If or should I say when the Cons are beaten, Schmearmonkey won't be around for very much longer.

Hi Jackie.. I believe most Canadians give the Trudeau government credit for its efforts on the trade front, so criticizing our government abroad is sure to backfire. The only reason they are doing it is because they are desperate, and it will get them nowhere....

Hi Steve.... You know what happened to the boy who cried wolf. Well the same thing is going to happen to the Cons. Canadians will see that they are just playing politics, and the Cons will be the ones who end up paying a heavy political price....

Hi Gyor....I know you must be disappointed to see the Trudeau Liberals rise from the dead. But most Canadians know that the country is doing well, and for most of them that's what counts. A little group of losers will no doubt beat their drums and cry "broken promises!!!" but I doubt many Canadians will notice or care. Sorry.

Hi Jackie....don't worry, the fake scandal died long ago and it's not coming back. Lisa Raitt and Warren Kinsellla can try to give it mouth to mouth resuscitation, but they'll only end up with blue lips themselves. The fake scandal died when Canadians made it clear they had enough, and the Cons would be crazy to try to bring it back again...

Hi anon...I'm glad you like Scheer as Alice, I was going to portray him bobbing around in a toilet, but I thought that hole was better. Next he'll end up in the monstrous Queen's garden helping to paint the roses Liberal red, until his time runs out and he loses his head...😉