Why Does Michelle Rempel Hate Canada So Much? 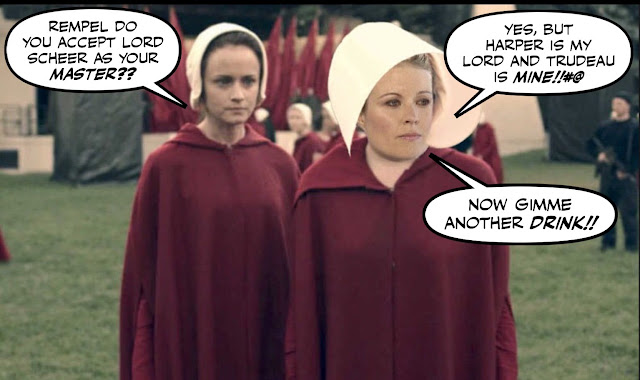 As you may know, I'm not a member of the Michelle Rempel fan club.

I consider her one of the most aggressive members of the Con cult. She's always making wild accusations, and complaining that Alberta is getting screwed by the rest of Canada.

She insults the Prime Minister all the time in the most vulgar manner. 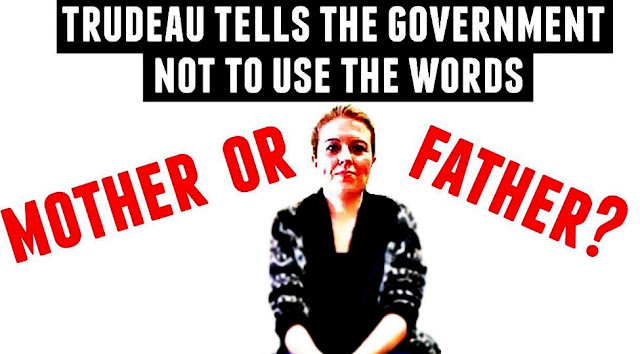 And as if all that isn't bad enough, I fear she sometimes drinks too much... 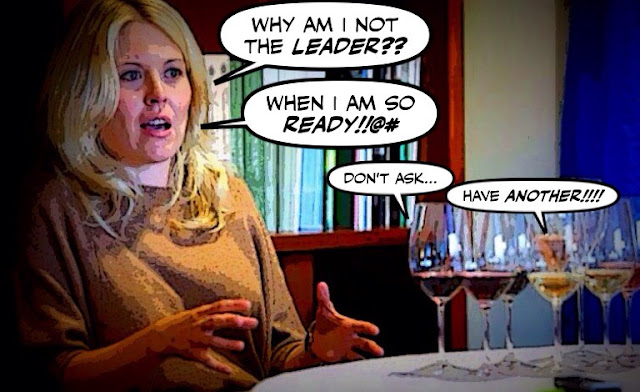 So imagine how happy I was to see that Rempel had recently married Jeffrey Garner a U.S. Army veteran. 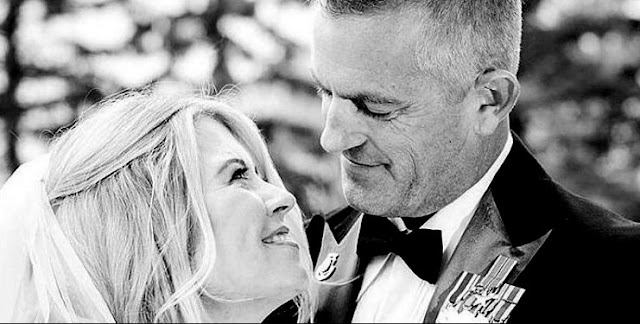 Garner runs an equine therapy centre for veterans in Oklahoma, so I thought he might be able to rein in her increasingly bizarre behaviour.

For who can forget how she reacted when she recently failed a Baloney Meter test? 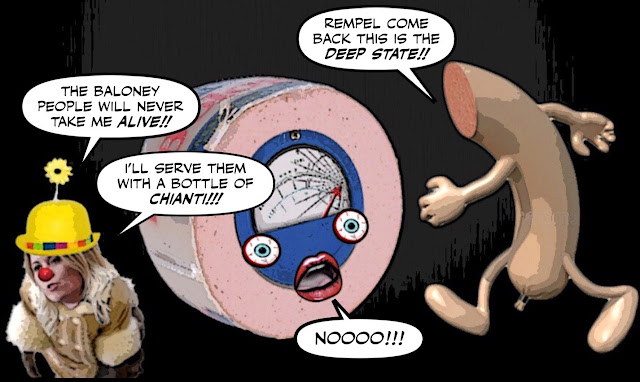 The anger, the paranoia, the alt-right nightmares, that too was a horror show.

So as I said before, I was happy for her. 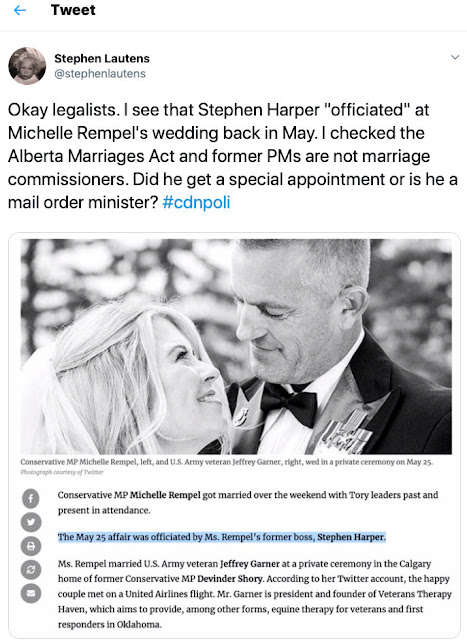 Because after that all I could think of was whether Stephen Harper was now posing as a mail order minister, like he once posed as a Great Leader?

Or after reading Rempel's latest tweet, wonder why she would marry someone who hates Canada so much? 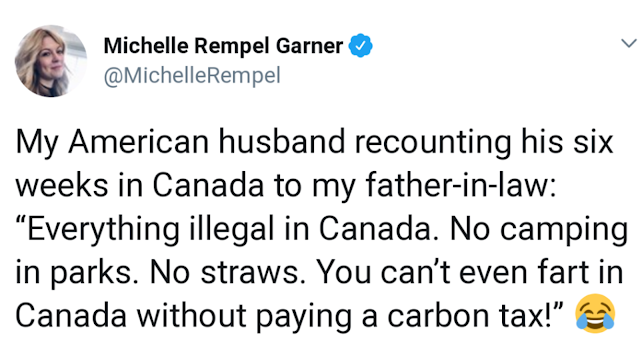 Why did she think that was so funny?

And of course I also couldn't help wondering why so many of our ugly Cons also hate Canada so much?

Because that's never been more obvious... 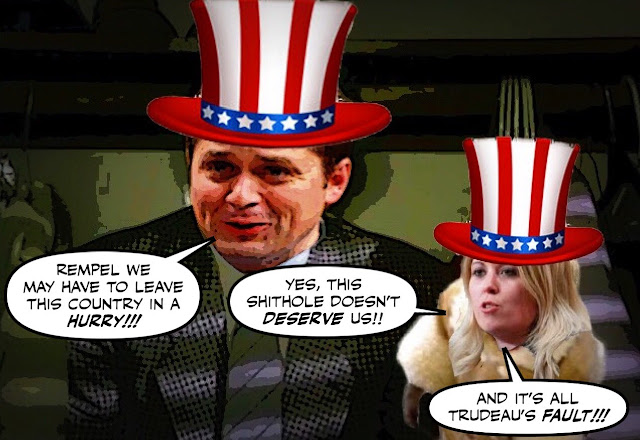 And neither has this been more obvious:

The Cons are becoming more American or more Trumpling with every passing day.

So if we want to save this country and its values.

We are going to have to vote Canadian... 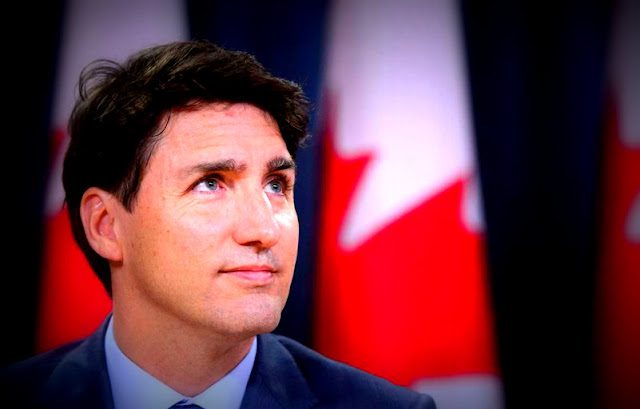 Did she make Mit's day and self deport ?

.. poor ms Rempel.. failed to point her hubby west.. take him camping in uh.. that tiny park called Banff National Park.. where you can hike along THE GREAT DIVIDE.. or the one jammed to the north call Jasper National Park.. or south to Waterton Lakes National Park.. or eastward to Kananaskis Country park system.. (news to mrs Rempel-Garner - we hosted much of the Winter Olympics there)..

Ulp.. poor hubby of Michelle trapped on all sides by parks you can (and must) camp in.. perhaps she took him to Saskatchewan..? Bottom line though is the poor guy never camped in Canada.. hell, there's Park campgrounds all over Alberta.. and there's the tailings ponds national park where the buffalo roam & the waters run clean, the trout leap.. Oh sorry Simon, I began to hallicinate Jason Kenney and Andrew Scheer's unicorn fantasy of Alberta Remediation.. or uh Advantage ..... A Dilbit Pipeline To Asia .. wet dream to help SAVE THE ENVIRONMENT.. sez Justin n Ms McKenna

Together they will all SAVE THE WHALES, THE BUFFALO WILL ROAM, THE SALMON CAVORT, WHITE SPIRIT BEARS IN EVERY POT.. AND THE BOREAL CARIBOU.. WELL UH.. WHAT A SHAME.. AND LETS SHOOT & POISON THE WOLVES EH !

Seems that Rempel married a comedian. Hopefully they will return to the land of the free where a real man can fart at will. Unfortunately for the veterans with so much deep insight on all subjects it is unlikely they will leave the therapy to trained professionals or the horses.

A new Abacus poll suggests that as many as 40% of Canada's Cons love Trump. On behalf of the country that went from being the elephant in the bed to a rabid, orange woolly mammoth on Calgary stampede, I again want to say I am "soory" to Canada for exporting this Repugnican prion disease. If I could, I'd deport all of them to a Russian gulag on an ice floe where they can have their authoritarian Fox News paradise of white-hot hatred. Rempelthinskin and her jarhead hubby can have all the vodka they want. Until then all I can say is vote ABC and Make Canada Canadian Again.

That new poll also shows the Conservatives and the Liberals as being tied at 32%,as well as stronger negative ratings for Trudeau vs Scheer. Not good news for Junior's many fans here, is it?

There are plenty of parks in Central and Eastern Canada where one can camp as well. Here there are tonnes of French and other francophone visitors and immigrants who want to see nature in Québec and Acadia.

Simon, will you treat us to a Boris Johnson piece?

NB: OT but speaking of handmaids who hate Canada. I hope the Liberals have a war room to tackle the Green menace lurking in the distance. Lizzie Mayhem just said she'd be willing to prop up a Con minority government if she felt they could work together on climate. Which means all weak Andy would have to do is lie like he always does and issue some empty platitudes that he'd revoke anyway.

WK is behind this. This is a drastic flip-flop from an earlier statement where she said she would rather form a coalition with Singh and Trudeau to keep the Cons in opposition and deny them confidence of the House, even if they had more seats. The only difference is WK, the Green with envy snake in the grass who has weaponized the spoiler party in hopes Trudeau will crash and burn.

This bastard is dangerous, he's gone nuclear and he's pushing a Jill Stein scenario to satisfy his perverse vendetta. He'd rather see the whole country burn than the man he hates succeed -- and Trudeau take the blame for it. What I find even more disturbing is how his targets or pawns (or collaborators) are always women. May, JWR/JP, the woman in the Creston Valley article, Patty on Twitter, Julie Lalonde (the sexual-health educator who called out his BS), and I just read a few days ago that besides Trudeau himself, he has an axe to grind against Katie Telford for blocking his nomination even more so than he does Gerry Butts. Wow.

What is with this guy besides PM envy and serious issues with women? And damn the media for not reporting on it properly or vetting him and St. Elizabeth! More concerned about satisfying their own ratings-driven desire for clicks, their corporate mandates, and their own sick, twisted personal animus toward Trudeau. Jealousy is a powerful drug.

That same poll showed a tight race is what it showed. Nearly every poll save for a few outliers does. It also showed that Trudeau is still ahead of Scheer as preferred PM. Media loves their horse race narrative but I'm not going to obsess over all the details about one particular poll. What I do know is that most people don't know weak Andy and he's not being vetted properly by the media which is why his numbers are so vague. But I will point out that the same poll showed even higher disapproval ratings for his Trump North acolyte Ford.

I'm under no illusions about the efficacy of propagandist Schmear campaigns, having witnessed the relentless demonization of "Crooked Hillary" by the right-wing media (and some nihilistic fake-progressives who just wanted to Bern the "neoliberal" witch and break the system) and now, Internet disinfo campaigns that has since led to buyers' remorse and children in concentration camps. Are you proud of the hell that your kind has wrought? Wait -- don't answer that. It's obvious you are. Anything to own the libs.

Your use of "Junior" reveals you to be another sadistic, arrogant Con who enjoys belittling and dehumanizing humanitarian leaders who strive to better the world and their countries, and get ripped to shreds for it by self-interested people with personal insecurities and an agenda to push. Not that you care, I'm sure, but history will not treat you kindly. It will to Hillary Clinton, Al Gore, John Kerry, Kathleen Wynne, Rachel Notley, Jimmy Carter, and Justin Trudeau. That is, if there's a planet left to judge your ilk at all.

Dan Mctauge the gas buddy is in my humble option and others that allege he has sold out. People who totally sell out upwards are to be shunned.

terrible as it sounds but the greens may hold the key to a governing party after the next election. I would like to see JT come out swinging at Liz the betrayer. That would be the third women who has done that, does he have a women problem or a trust problem?

"BoJo the Clown: He's just not ready. Nice hair, though."

I just have to say that I have been reading your comments and I have been obsessively listening to Pod Save America and Lovett or Leave it. You are so hilarious and spot on that if I didn't know better I would say you were Jon Lovett. You definitely are just as insightful and witty.

The irony of most of what I've read here is that there is kernel of truth in it. Like all comedians know, there has to be a nubbin of reality to get people to identify and relate/react. I too wonder why Ms. Rempel-Garner is not the leader of the UCP. We would be much further ahead if she was.

I was fortunate enough to meet her then fiance at a town hall meeting a couple of years ago. Maybe it was a case of one soldier recognizing another, or the way he was constantly scanning the gathering, much like a sheep dog. Again, maybe like recognizing like. When we had a chance to speak, notwithstanding having served in different national militaries, it only took about 3 minutes for us to discover a person (U.S. Special Forces) that we both knew.

My MP is Stephanie Kusie, and I think the sun rises and sets on her. I believe she and Ms. Rempel-Garner are cut from the same cloth. I only wish we had many, many more of their type.