Why Doug Ford Can Never Be Trusted 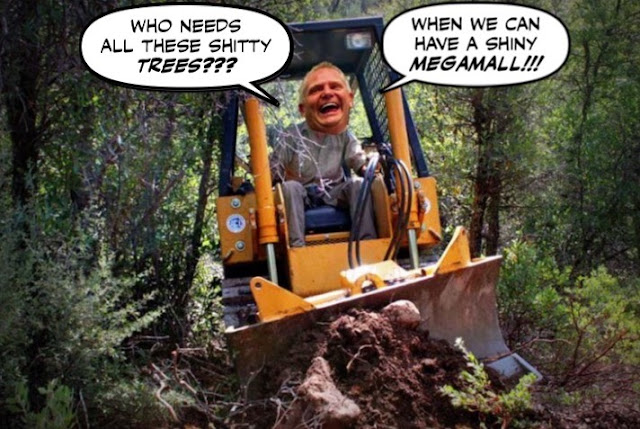 As you know Doug Ford had secretly promised to let his developer friends carve out a big chunk of Toronto's Greenbelt.

Until a video was released of him making that promise, and he performed one of the quickest flip flops in modern Canadian history.

The people have spoken - we will maintain the Greenbelt in its entirety. pic.twitter.com/VcNDZdXtPZ
— Doug Ford (@fordnation) May 1, 2018


It was humiliating, it made no sense, and his claim that he listened to the people couldn't be more absurd.

When he was obviously spanked by his Team Harper handlers, who you can be sure will do anything to make sure the beast doesn't make that kind of mistake again. 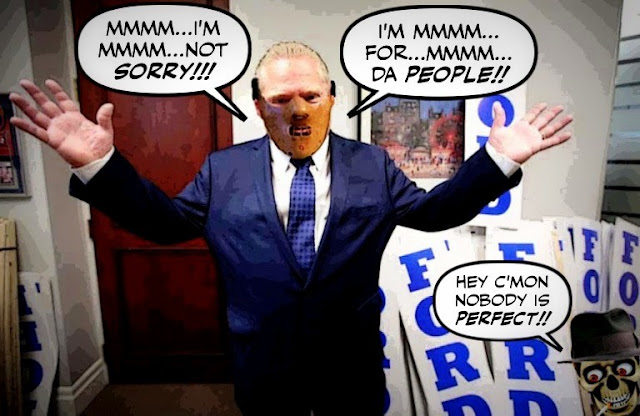 But of course the damage has been done, and as the Toronto Star's editorial board points out, his quick about-face does speak volumes about Doug Ford.

We learned something important this week about Doug Ford, the man who would be premier. We learned that he makes stuff up on the fly and is willing to say things to pander to whatever audience he’s talking to.

We learned that he doesn't know what he's talking about, and that if he hadn't been caught on tape we might not have found out what he was planning until after the election.

If the video hadn’t come to light, the developers would still be under the impression that a Ford-led provincial government would set about carving bits out of the Greenbelt, one of the most important environmental initiatives of the past 20 years.

And most ominously we have no idea what other things he might have promised others behind closed doors.

What else, we wonder, has he promised similar groups? What other simplistic declarations has he made to win support, first during his successful bid for the PC leadership, and more recently in the run-up to the official campaign for the June 7 Ontario election?

Apart from his promise to let Tania Granic Allen and her religious fanatics go after women, Muslims, and bullied LGBT children. 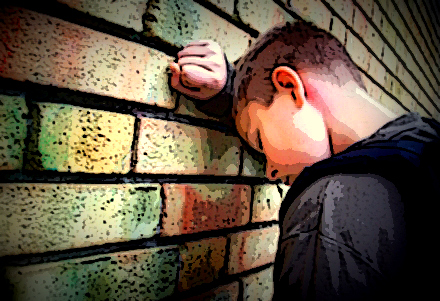 Even if it hurts or even kills them.

For he can deny he's a bigot, but after his Greenbelt flip flop who can trust ANYTHING he says?

And the answer is NOBODY.

And not when there are so many reasons he shouldn't be Premier.

So whether you plan to vote for the Liberals or the NDP.

Save the Greenbelt and the province, and the country.

And bulldoze the ape before it's too late... 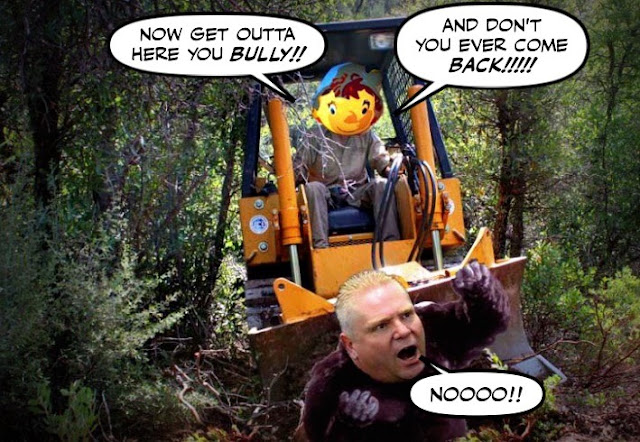 Simon that image of Ford as Hannibal Lector is just brilliant and so true too. After that greenbelt gaffe Ford's handlers will be following the ape into the toilet. But as you said, it's too late. Nobody could trust Ford after that.

What surprises me, although it probably shouldn't, is how quickly Ford rolled over on his back like a cowardly Dougie doggie. He didn't even try to defend his proposal which tells me that Team Harper already have him on a very tight leash, and that Ford is just a puppet.

The reason populists like Trump, Kenney, Ford etc. get elected is quite simple. White people don't want to become a minority in our countries. Make Ontario White Again.

If the Harper people are controlling Ford to that extent shouldn't we know who they are so we know who would be the REAL government? The Con media has been strangely silent on this question but we need to know who are the ones pulling Ford's strings.

You'd think that by being a big ape, Duh-oug would want to preserve the forested areas but I guess it comes down to where he would gain the most bananas.
He's no King Kong, Lord of the jungle. More aptly, Flip Flop, King of the bungle.
JD

You whipeepo are guests in OUR country, m-fer. And Ontario's premier has no say in who the country lets in, so take your racist crap somewhere else.

I love that "You can't trust what Doug says" ad. No strident attack just Doug being Doug and it is utterly damning.

Keep up the good work Doug.

hi anon @3:00 pm..thank you I'm glad you liked my Hannibal Ford. I just wish I could have been a fly on the wall and heard what Team Harper told Ford after the video came out. It couldn't have been pretty. And yes it probably is too late. Ford is bad enough, but if you can't trust him it's worse...

hi anon@3:38 PM...I was also surprised that Ford surrendered so quickly and so meekly. But let's face it, that video is damning, and the Fordzilla knows that only Team Harper can make him look like a Premier, so he will do what he is told....

hi anon @4:09 PM... God almighty if Trump, Kenney, and Ford represent the "Master Race" we poor whiteys are in trouble. And you of course are a racist asshole...

hi anon @5:44 PM...well said. It's hard to believe that some whipeepo are that dumb. But that's what centuries of inbreeding have done to them...

hi anon@ 4:17 PM...that's a good point. If Ford's handlers are going to be telling him what to do, we need to know whether he will be the real Premier, or will it be Stephen Harper?

Hi JD...Those of us who live on the Toronto waterfront already knew that Dougie loves to fancy himself as some kind of super developer. But sadly for him the only building blocks he can put together are something right out of a Leggo box, and the King of the Bungle belongs in a place like African Lion Safari. Or of course the Big House... ;)

You have to admire the Harper masters of the universe, they never let go a a dirty trick. Harper 24 TV went on even when no one watched, and now Ford Nation 24 takes it place. If Doug Ford can be elected Premier of Ontario I do fear for democracy and wonder why Justin did not rush proportional rep?