The Many Similarities Between Doug Ford and Donald Trump 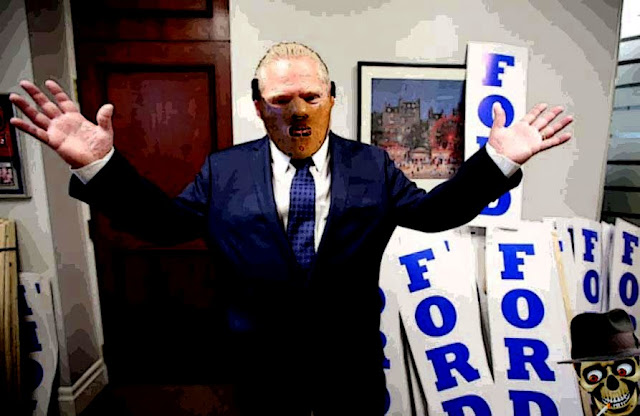 As I predicted before the campaign began, Doug Ford's Team Harper handlers are trying to muzzle him.

Or at least restrict media access to him, just like they did with their Great Fallen Leader.

To try to prevent Ford from sticking one or both feet in his mouth. 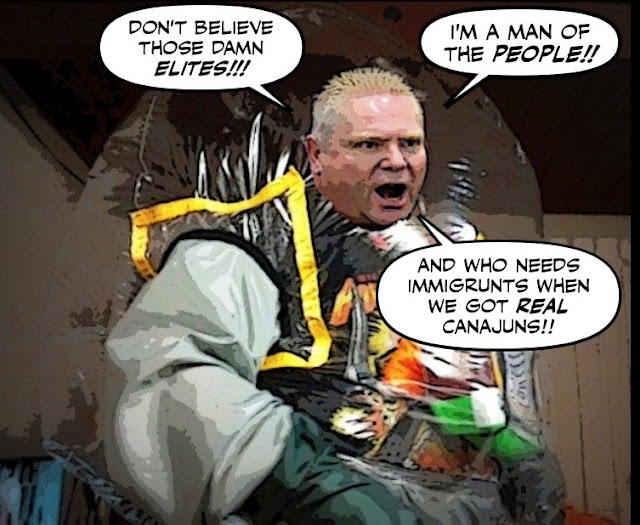 They can keep the Fordzilla in a bubble, but he still looks like a beast.

A day after drawing stern rebukes for saying the province should be “taking care of our own first,” Progressive Conservative Leader Doug Ford scrambled to do damage control over his controversial remarks about bringing more immigrants to northern Ontario.

For while some of Ford's resemblance to Trump can be explained by his abominable ignorance.


Or his inner ape.

He might as well be wearing a Make America Great Again cap like so many of his supporters... 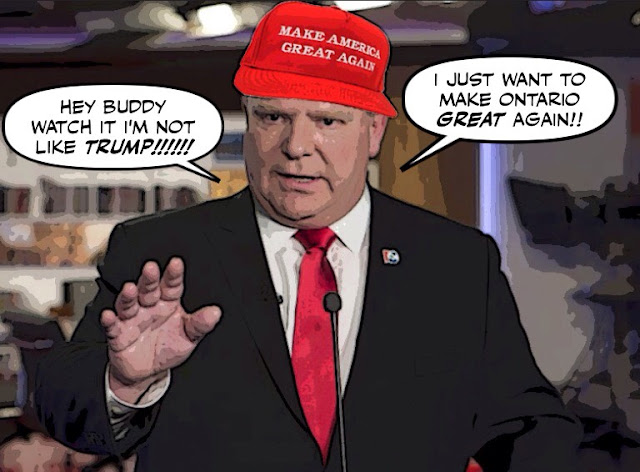 For there are so many similarities between him and the orange oaf.

They both have many brutish followers, who make ignorance a virtue, are virulently bigoted, and hideously xenophobic.

They both seek to surround themselves with right-wing freaks like Andrew Lawton. 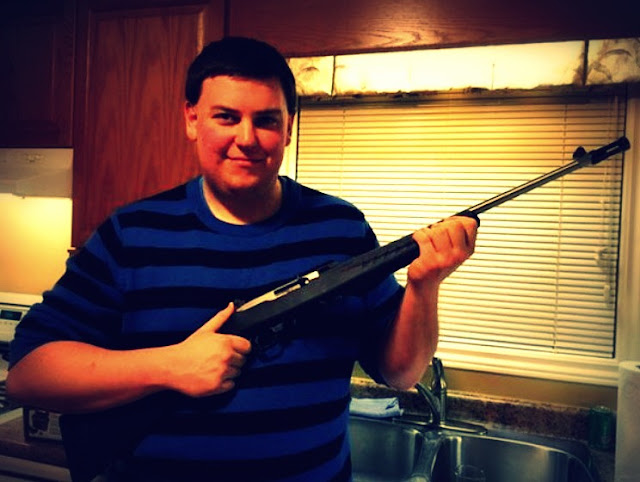 Who among other things believes that Canadians who use food banks should be forced to hunt for their food.

Both Trump and Ford seek to pleasure the fanatics of the religious right, and vicious anti-gay bigots like his spiritual adviser Charles McVety.

Who would make life miserable for bullied children in our schools... 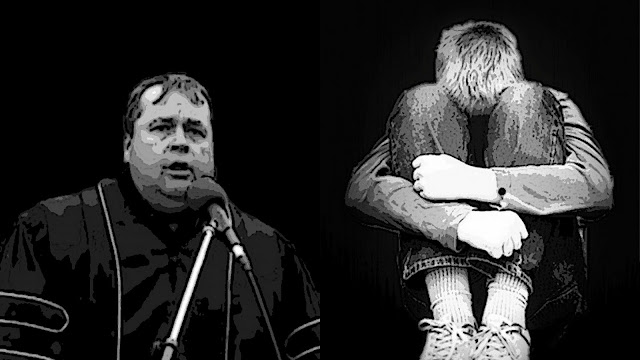 But who Ford, who had himself anointed before the campaign, claims is a "good" and "respectful" man.

They both go around ranting and raving about the "elites" when they are them. Rich capitalist pigs with big homes all over the place.

They are both rank misogynists, with Ford clearly trying to physically impose himself on Kathleen Wynne.

Like Trump did during his debates with Hillary Clinton... 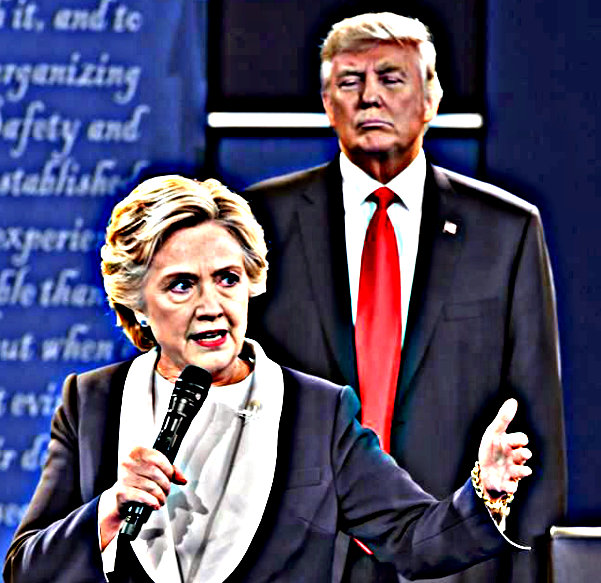 So whatever some in the Con media say, Ford and Trump do have their similarities, and as Michael Warren writes, both are dangerous tricksters.

The more conservative commentators try to emphasize the differences between Donald Trump and Doug Ford, the more Ford’s actions point to the similarities. Yes, no two politicians are the same. There are differences. But at the core they are both dangerous, pretender populists.

They make suckers out of their supporters, for they are only in it for themselves... 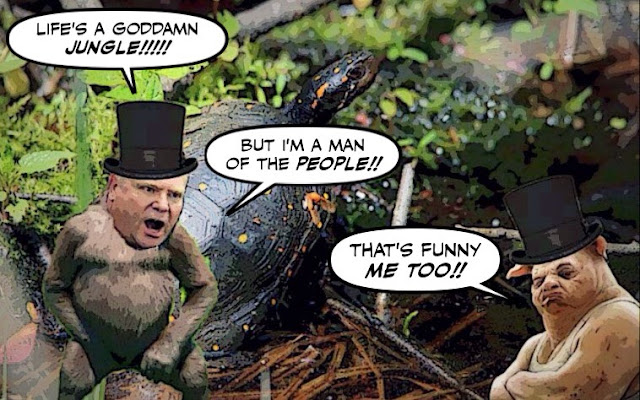 Both Trump and Ford promote the illusion they are “on our side.” They are fighting for the taxpayer, the little guy. “Liberal fat cats and insiders are getting raises while real folks aren’t.”

In reality, both Ford and Trump are themselves business elites who are masquerading as populists. They are feeding off this very real cultural resentment – fanning the flames of discontent for their own ends.

And this is what you get if you vote for Ford:

As well as old people dying in hospital corridors, and many millennials looking for another place to live... 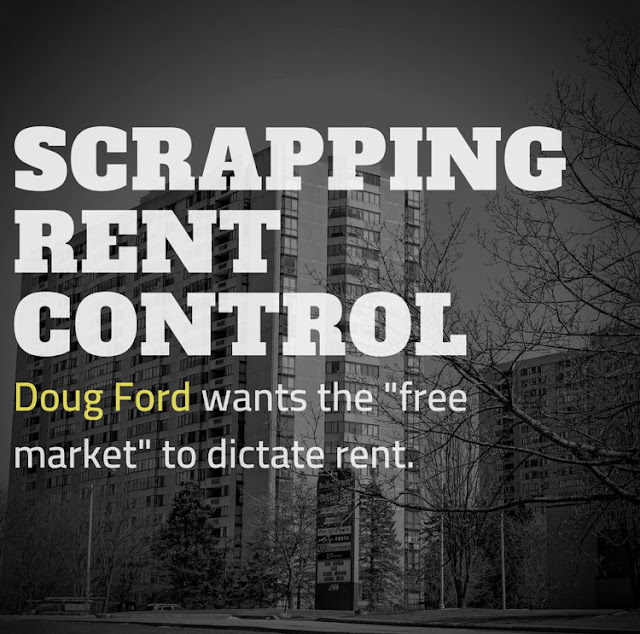 In short, a real nightmare.

The NDP seems to be gaining momentum.

An Anybody-but-Ford movement is percolating.

Swaths of Liberal and NDP voters most firmly opposed to Doug Ford are preparing to switch allegiance if the other party appears to have a better chance of stopping his Progressive Conservatives.

Which for me at least, makes this option even more attractive... 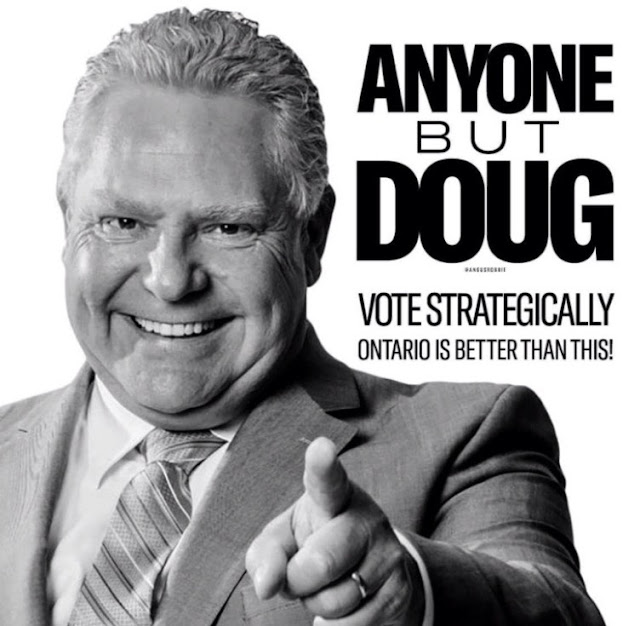 For all I'm interested in at this point is that Ford be defeated.

The risk is just too great.

The last thing we need is a Canadian Trump.

The beast must be caged.

And in the name of human decency, Ford must be stopped... 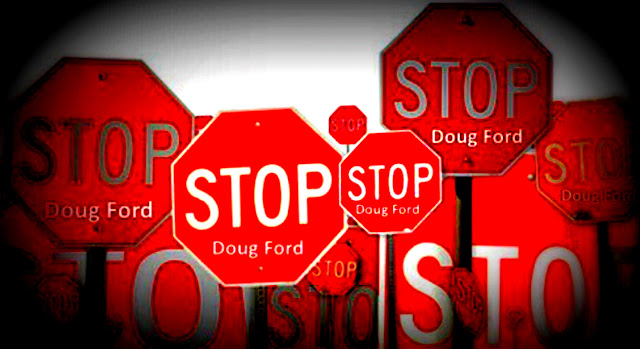 I'm voting for Ford simply to spite all the progressive BS that's been forced down our throats over the years.

And by "progressive BS" you mean "human rights for people you don't think are human." You sound like a Trump supporter. You don't really care about Ontario or about Canada any more than they cared about America. You're a sadist who just wants to see people suffer. I'm sure you consider yourself a pious churchgoer too.

Canada is a better country than to tolerate low-info, right-wing bigots like the swamp-dwellers that populate Ford Nation or the Trump cult. This isn't about "taxpayers." This is about divisiveness, bullying and hate. You're on the wrong side of the border and the wrong side of history.

Come on I find that hard to believe. I think is because your mommy asnd daddy, upstairs vote for the cons.

Admittedly, I'm from the U.S., and don't know all the details of how a bill goes through Canada's parliamentary system. But then, I'm not running for office in Canada, let alone premier of the second-largest and most populous province where the nation's capital happens to be.

Does CBC Kids have a version of "Schoolhouse Rock" he could sit down and watch in between calls to his dealers? 'Cause it sounds like Dougie needs some remedial civics education, bigly. Not to mention he and his dime bag of deplorables all ought to go back to kindergarten and learn some manners or be made to stand in the corner wearing a dunce cap. He's just not ready. Nice dope, though.

As a good Canadian, I, probably, don't know all the steps but I probably could wing it. Certainly, it appears that I know ≈ 100% more than Dougie.

It would have been great to hear how he planned to get bills past the Senate in Ontario. Maybe we can get a reporter to ask.

And Wynne is playing Hillary's game of demonizing her opponent. Remind how that worked out?
All rational Libs should vote for Horwath this time.

Indeed it's about bullying. The left bullying the right. And now it's time for the pushback.

"Admittedly, I'm from the U.S., and don't know all the details of how a bill goes through Canada's parliamentary system."
I'm guessing you know 99% more than the GOP version of Barney Rubble will ever know, Jackie.
JD

The only silver lining is that four years of Ford will ensure that Justin Trudeau rules for as long as he pleases and Ontario will flip back to a left-wing government in 4 years. This is the forest fire that James Comey talks about in the United States, the only difference is, it'll burn out fuckin quick up here.

Care to provide some examples of said "bullying" by the left?

As they say in Internet parlance: [citation needed]

Hi anon@1:06...I have heard of many reasons people might vote for Trump, but yours is the worst and the most pathetic. Have you ever considered that you might be cutting of your nose to spite your face. Or that if Ford does win the Cons won’t win again for at least a generation. And that it would almost certainly mean that Justin Trudeau would win a huge majority. You sound like a very bitter and unhappy person. Try to get a life because it’s over before you know it...

Hi Jackie....well that will teach him😼 I agree with everything you say, but I also feel sorry for some of those sorry Cons. They are clearly very unhappy, and as I told that person, life is too short to live with that kind of hate in your heart. If I was so disposed I could find reasons to hate them since most of the comments I receive are too homophobic to publish. But again I see it as just another sign of the corrosive bitterness that makes them so pathetic. We need to be able to rescue some of them, but I’m afraid many of them are too far gone to be saved, and will meet the fate they deserve. Aren’t we lucky to be progressives? Aren’t we lucky to know we are going to win, and that the future belongs to us...😀

Hi anon@5:20 PM...I’m against bullying whether it comes from the left or the right. But right-wingers are responsible for about 95% of the bullying in this world, so let’s not be ridiculous. I’ve tried to understand people like you, and I keep coming back to the enlarged fear gland in Con brains. I’m sure it had some evolutionary value at one time. But those times are long past, and it’s time to move on or grow up...

Hi ffibs....I think it’s the opposite, and that his parents are Liberals. I always tell my progressive friends with children to try to pretend they are Cons during the formative years. Then the kids will rebel against them and become good progressives. Of course I have never had a chance to test my theory, and never will. But I think it was something Hegel wrote that convinced me I was on the right track...🤔

Hi Jackie....I think you’ve put the finger on Doug’s problem. He spent too much time on that street corner selling hash, and not enough time in school. And when he was on the City Council he missed 53% of the meetings so he never had a chance for self improvement. And it shows. Every time I hear his voice I am stunned by how dumb he sounds. Lord help this province and this country if he ever becomes the Premier...

Hi Northern Pov...as you may or may not know I never attack progressives, and keep my opinions to myself at least on this blog. So I believe that the Liberals and the NDP should focus on convincing people of the merits of their respective platforms, and save their ammunition for the Ford Cons. As I said in my post I am ready to vote strategically and would welcome a win by either party...

Hi anon...I share your optimism. I too am convinced that something good will come will come of this even if Ford wins, and I emphasize IF he wins for I’m starting to think he just might not. But if he does win he will almost certainly hand Justin Trudeau another crushing majority. And here in Ontario the PC’s will be gone for at least a generation. A new generation is rising and the future belongs to us..l

I would honestly be more surprised if your rationale for voting PC included any kind of policy position. Because conservatives haven't had coherent policies since Bill Davis.