Doug Ford and the Bonfire of the Bigots 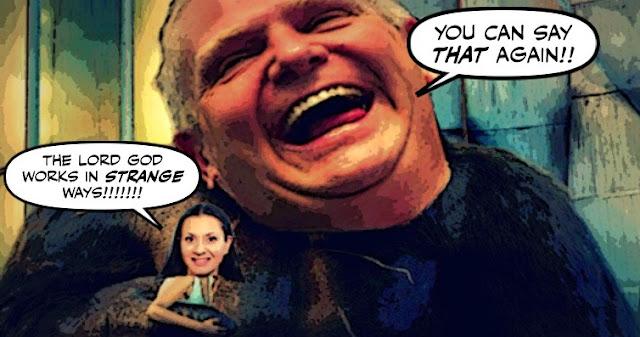 As you probably know Tanya Granic Allen and Doug Ford had a very special relationship going.

For if she and her band of religious fanatics hadn't thrown their support to Ford during the PC leadership convention, he might not be just a few weeks away from becoming the new Premier of Ontario.

When the Harper operatives running his campaign suggested that he cut her loose, he refused and instead hugged her to his hairy bosom harder than ever.

At least until yesterday. 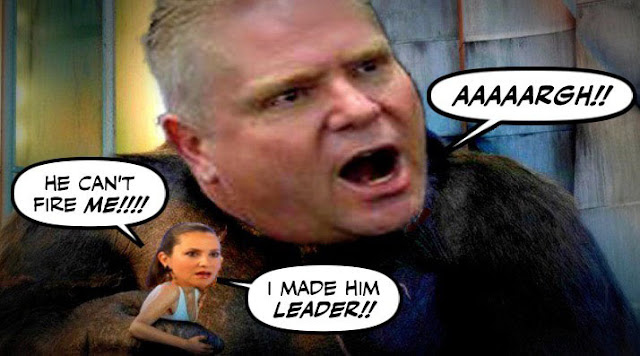 When he fired her

Ontario’s Progressive Conservatives have dropped a controversial candidate from their roster ahead of the spring election, with the party’s leader saying “her characterization of certain issues and people has been irresponsible.”

Ford's announcements come the same day as the Ontario Liberals zeroed in on a 2014 video in which they say Granic Allen "spewed hatred and homophobia" while discussing sexual education in Croatia.

The video, which was edited and posted on the Liberals' website, shows Granic Allen saying that when she sees Croatia "trying to push radical sexualization on the young, or gay marriage, I almost vomit in disbelief."

And although Granic Allen held her fire...

Her supporters have come out swinging.

"If Doug Ford has declared war on Social Conservatives we're ready to do battle," says Campaign Life Coalition vice president Jeff Gunnarson. "We have ten thousand paid up troops. They are trained, they are eager and they will strike when given the word. This is the worst mistake Ford has made and will make on this campaign. He's going to eat that decision."

So you know it's going to get ugly... 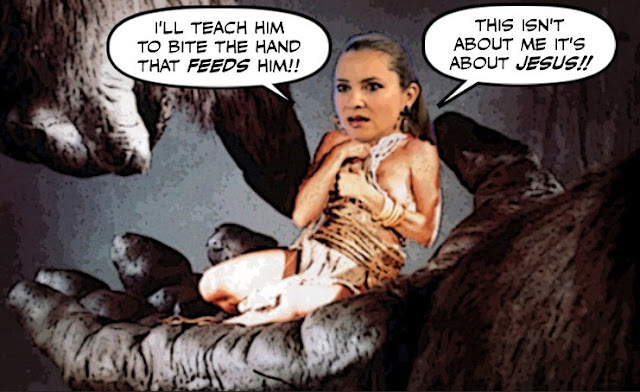 And the Ford campaign is starting to look like a slow motion car crash. 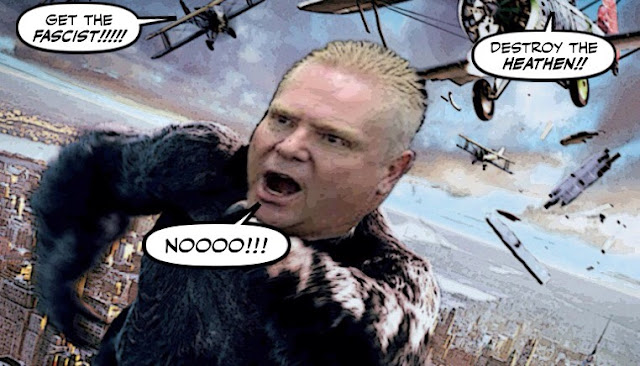 With the Fordzilla now under attack from both sides of the political spectrum.

And the other good news is that Andrew Scheer must also be fuming, for as a fellow religious fanatic he shares Granic Allen's views.

And although our shabby Con media is always giving him a pass or an absolution.

Sooner or later he will be forced to reveal himself... 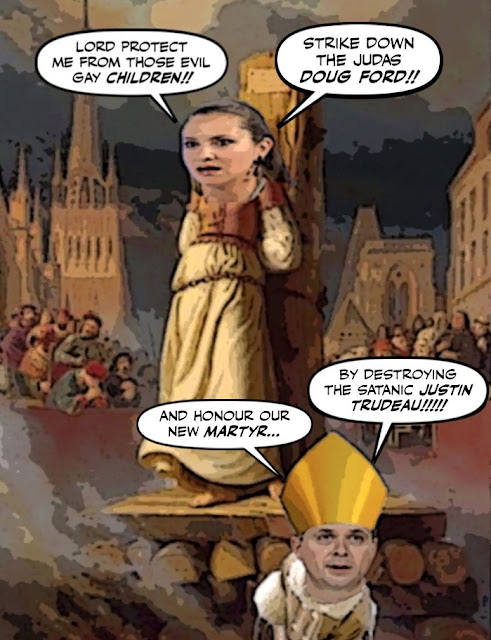 So if we're lucky we might be able to bring down two for the price of one.

The Great Polar Bear God of the Great White North does indeed work in mysterious ways.

Anyone got a match?

It's the bonfire of the bigots....

Another great post. Time will tell if dumping "Tanya Granya" as a candidate will unravel the Harper/Ford/Religious Right cabal. Every time I see "Doug the slug's" shit eating grin I think of Jabba The Hutt!

Its very suspicious how this person found $100,000 to waste on a single issue and her ranked ballot made Dougie the winner?

Gee, that's the opposite take that Kinsella took on the removal of Allen. He was giving Ford credit. Strange that. Warren must of picked up another contract from the Cons.

He giveth and taketh away the 10,000 second round votes that bought Dougie the leadership race. Although total defeat is unlikely, hopefully the million plus government workers as well as those heavily dependent on government services will also rush to the exits resulting in a slim majority or a minority Con government. The resulting one season sitcom titled "Dougie Chained" should make some interesting viewing this fall.
RT

It's just as well Ford fired her, for if she had been elected as a PC he would probably have had to give her a cabinet position, and god knows what unpleasantness she could have caused. Everyone is free to believe in whatever they want, but if you give those theocons any power we could end up with the same situation as we have in the U.S. where religious bigots are everywhere in Trump's government. If our religious fanatics don't like it here they are free to join them. God riddance.

hi anon...thank you, I'm glad you liked the post. As for whether dumping Granic Allen will cost Ford enough votes to matter I guess we'll have to wait and see. My hope is tempered by the fact that the religious fanatics have no other party to support. So probably the best we can hope for is that some of them decide to stay at home and not vote at all...

Hi Steve...I believe the amount was $125,000, so like you I was surprised that Granic Allen was able to come up with that kind of money. But the religious right is a force in North America. They are at the core of Trump's government, his most faithful supporters. So maybe one of those people or groups bankrolled her candidacy. It's another reason Canadians need to take the threat of the religious right seriously. So far they have made Andrew Scheer and Jason Kenney leaders, and they could still do the same for Doug Ford. That old adage it can't happen here, is sounding increasingly hollow....

Hi ffibs...I saw what Kinsella had to say, and I suppose in one sense he's right. It's good that he finally took steps to force Granic Allen out of the running. But I can't share Kinsella's joy. He is far more conservative than I am, and of course a lot less gay. ;)
And the fact is Ford was only too happy to welcome her support, and did declare that he was looking forward to working with her i.e. offering her a cabinet position. And it was only after that video emerged that he quickly changed his mind. And what bugs me about Granic Allen is that her whole platform is an attack on LGBT youth. If the bigots wish to go after adults that's one thing, but going after bullied children is in my book absolutely unforgivable....

Hi RT...like you I dare not raise my hopes too high. The fact that an ape like Ford could be so popular is a searing indictment of the kind of society we have become. Bit hopefully the Greenbelt scandal, and the ravings of Granic Allen will cause some to reconsider. And needless to say, I will be hoping that Ford falls flat on his face at tonight's debate...

hi anon 2:10 PM...yes, if that video hadn't surfaced, and Ford was elected, he almost certainly would have had to giver her a cabinet post. And the thought of Granic Allen as Minister of Education would be an absolute nightmare, and as bad as the Betty DeVos appointment in the United States. Like you I see the theocons as a real threat, and I hope that Canadians will start taking that threat seriously...


Hi Simon. Jackie Blue here. Sorry that I didn't announce that I needed a hiatus from all the negative news. But I'm getting worried about what's going on in my country and what's going on in yours, and it's making me nervous and ill. People are dying because of right-wing hatred, but the GOP and their equivalents in Canada just continue doubling down on it. I hope the Toronto attack was a wakeup call for Canadians as to just how deplorable the cons really are. The last post I commented on was one about Ford Nation's cult lashing out with misogynistic bigotry at Kathy Wynne, and the silver-tongued cult leader Jordan Peterson calling her "the most dangerous woman in Canada." A few weeks later, the van attack and comparisons to Polytechnique. Horrible, horrible people and I can't fathom how they have any supporters at all, let alone some of them being women, like Allen here!

I have a Trudeau calendar on my wall. The caption at the bottom reads, "Justin gazes at the future and smiles, knowing it's female." Prophetic, in a way.
I hope that attack was a wake-up call for Canadians, and that they're able to make the connection between that savage murderer and the party that would be most supportive of his sick ideology. If the POS who attacked those 14 women at Polytechnique was alive today he'd probably be a "personality" on Rebel Media if not a junior Tory MP. And what a time to have a PM who is unwavering in his commitment to feminism. Ford, Kenney, Scheer, Harper, Trump -- all of them are just deplorable men who need to be sent permanently to the unemployment line. May those victims' deaths not have been in vain.

Hi Jackie...welcome back!!! You were missed by me and many others. I was worried something had happened to you, but hoped that you had just taken a necessary break from the insanity that surrounds us these days. I think we all have to do that, take some time to recharge our batteries. I am naturally impatient, I want these rabid misogynists, racists, homophobes and other human scum to go away tomorrow. But the struggle were are in is a marathon not a sprint, so we have to use our energy wisely to make sure that our enemies collapse before we do. I thought Justin Trudeau's election victory would usher in a new era, and in my book he has. But sadly it has also brought out the beast in some people, and together with the influence of Trump, has fuelled a counter revolution that threatens our future, and the future of the planet. We are up against a ruthless enemy with deep pockets, and there are many mostly older men who are trying to take us back in time. But as depressing as their efforts are, they will not succeed, and we can look forward to a glorious day of victory. I read a story the other day about how the millennial generation is getting ready to vote in the Ontario election, and will hopefully have the same effect they had during the last federal election. You don't hear much from the millennials, for many of them just surviving is hard enough. But when the time comes I am confident that they will storm the barricades, and help power our side to victory. So welcome back !!! Your voice is a powerful one and eloquent one, and much needed. We are more and better than them, and we are going to win...

NOTE: Hi Jackie I had to repost your comment since some homophobic jerk is claiming that you are slandering that guy that that was mentioned on ARC's blog. Since I don't have time to investigate myself, I just removed that paragraph. Sorry about that. And welcome back!!!

Welcome back Jackie !!!! As Simon said we missed you. I feel the same way about all the bad news, so like you I sometimes take a break to clear my mind. Summer should help :)