The Day Doug Ford Was Exposed As A Fraud 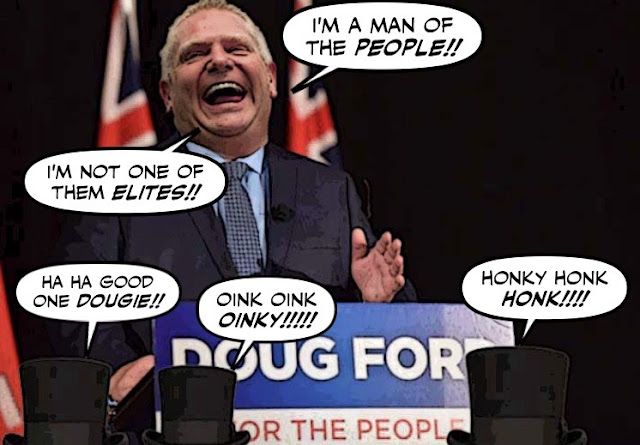 The Team Harper gang that is running Doug's Ford's campaign, gave him the tinny slogan "For The People," to try to make him look like he really is a man of the people.

But sadly for them he's a millionaire, and you know, Dougie will be Dougie.

A few years ago he came up with the garish idea of building the world's largest Ferris wheel, a megamall, a monorail, and a sail-in hotel on the city's waterfront. 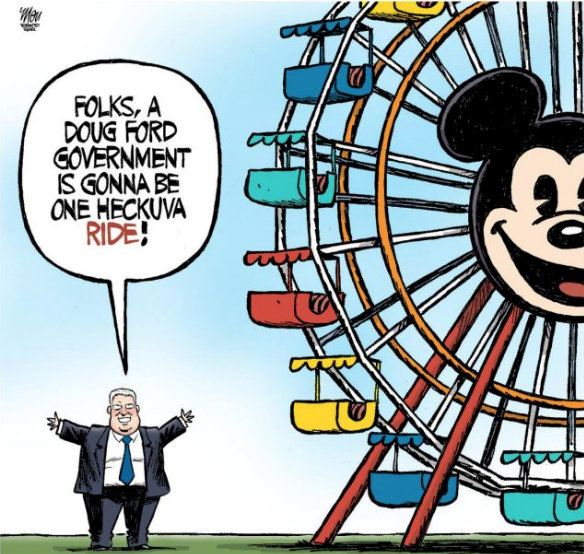 Which as you can imagine had Toronto's big developers howling and slobbering.

And although that "Big Idea" went nowhere, now that he could become Ontario's Premier, he's been caught on video offering to let developers take a big bite out of the city's so-called Greenbelt.

And yes, it couldn't be uglier, or more hypocritical.

Although the greenbelt protects environmentally-sensitive wetlands and forests, Ford tells supporters not to worry, because “it’s just farmers’ fields.”

But it does give the residents of Ontario a very good idea of what kind of government to expect if Ford becomes Premier: government by developer.

Ford says it wasn’t his idea – the idea came from developers: “I’ve already talked to some of the biggest developers in this country, and again, I wish I could say it’s my idea, but it was their idea, as well.”

And who can be surprised?

Ford has had a long and close relationship with Toronto’s biggest developers, counting on the support of local real estate tycoons to bankroll his failed run for Toronto mayor in 2014.

So much for the man of the people... 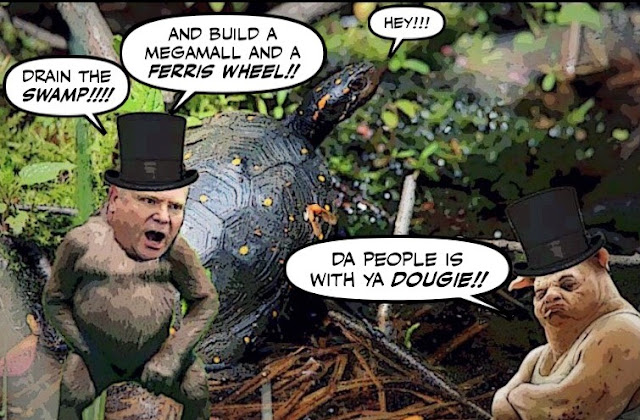 A new poll suggests that while Ford is still heading for a majority, his support is softening.

Let's hope the people of Ontario understand that they have been warned.

Before the ape becomes Premier, and takes them all down with him... 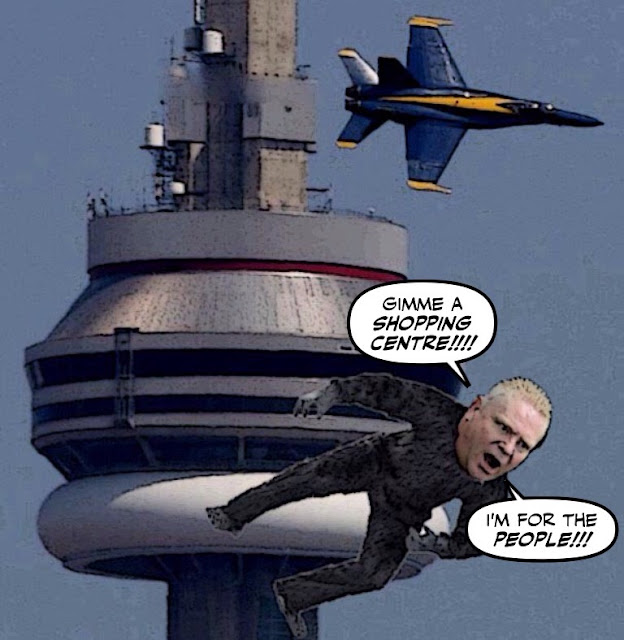 UPDATE: Ford changes his mind in a hurry...

The people have spoken - we will maintain the Greenbelt in its entirety. pic.twitter.com/VcNDZdXtPZ
— Doug Ford (@fordnation) May 1, 2018


But who could ever trust him again?
Posted by Simon at 1:23 PM

If this ape becomes Premier, Justin will rule for as long as his papi did...minus the break:

The Harperites running Ford's campaign must be freaking out, now they'll never let Dougie out of his cage.

The "man of the people" has listened to the people with large estates, and reversed his position on the Green Belt. Flip, flop. That was quick!

Good thing his word is his bond! I am not convinced that the green belt and Go transit will survive the first Dougie Budget.

"If they don't want me touching the greenbelt, then I wont be touching the greenbelt." Meanwhile in the back of his primitive skull he's thinking, "that is until and if I get a majority".
And that will be how Duh-oug becomes Premier as a millionaire and ultimately leaves as a multi-millionaire. That is a brief example of why the Cons love to bend over backwards for the big corporations, ka-ching!!!
JD

hi anon@3:29 PM... I agree with you, Canadians would never go for the unholy trifecta of Scheer, Ford, and Kenney. I think Trudeau is already heading for another majority, but if Ford becomes Premier it will be a super majority...

Hi anon@ 3:54 PM...I'm sure they did freak out, and as you can see they got the Fordzilla to run out and grovel and take it all back. And yes, I'm sure somebody from Team Harper will now be designated to stick to him like glue, and follow him even into the toilet. Which will be useful, for we will be able to ask what are they hiding?
The ape will be stopped by whatever means necessary....

hi anon @4:50 PM...let nobody say that the "man of the people" doesn't flip flop and grovel quickly enough to the sound of his master's voices. And his absurd claim that he follows the voice of the people not governments has only made him look even more like a moron. If that ape ever gets elected the whole world will laugh at us, and they will be right to do so...

hi Steve....I know, that's what I thought. One moment he's trying to impress some grubby Cons with his brilliant idea, and the next moment he's declaring the idea dead, because "the people" have spoken. Anyone who believes anything Ford says must be almost as dumb as he is...

If Ford is elected he will flip again. We had the same thing in B.C. with el gordo, (Gordon Campbell) He promised to not sell B.C. Rail, a government owned rail way. he sort of kept his promise he "gave" it away to his bag man who chaired the Canadian rail company.

the harpercons who are working with dougie were also in B.C. helping Christy Clark of the b.C. Lieberals and if you want to see what government by developer looks like just have a look at real estate in B.C. Need at least 2 million purchase a house in Greater Vancouver and more like 4 to 5 Million if you actually want to be able to live in it. Farm land taken out of the ALR, no problem.
A house for $550K that is 2 hours away in Chilliwack.

of course government by developer also can mean government by money laundering. it got to be really big in B.C. All that money which is made in China selling fent and the chemicals needed to make it, it needs to be laundered and nowhere is it easier to launder than through B.C. casinos and then into the real estate market.

Voting for Doug Ford will be like turning Ontario into what B.C. was for 16 years. not a good thing.

Christy Clark had a number of Cons from the Harper government working for her while she was Premier of B.C. along with Cons from the previous Alberta Con government. it did not go for the people of B.C. We can't afford to live in our own province. Of course Ontario is luckier than B.C. they can move next door to Quebec

Actually Dougie already is a multi-millionaire. He may be trying for billionaire but it seems possible he wants to be in the "Club". He and Rob were never in the real "movers and shakers' club of Toronto

Ford changes his mind
You are being to kind. He was told to change what he said by some horrified handlers.

How long can we put up with this big BUFOON? He is a mental case, and because of his large majority in Parliament, he will bankrupt the Province of Ontario. Absolute Power Corrupts Absolutely. These type of people are always evil people.
How do we get rid of him. Stan Glass

An Error occurred because you censured my comments about Doug Ford about Absolute Power Corrupts. HE, Doug Ford is EVIL and should be removed