Doug Ford and the White Supremacists 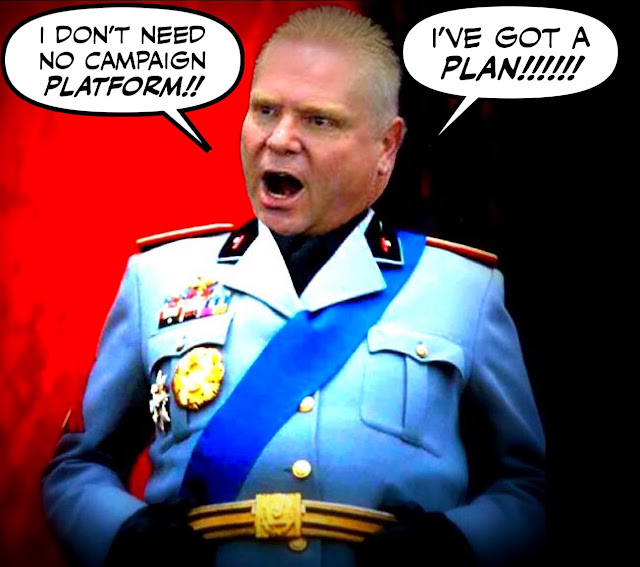 Just a big fat old Dougie from Etobicoke, with delusions of grandeur.

But we also know that Canada's white supremacists want Doug Ford to be their homegrown Fuhrer.

We know that one of his PC candidates was caught in the act of giving a shout out to far-right extremists.

And now we know this. 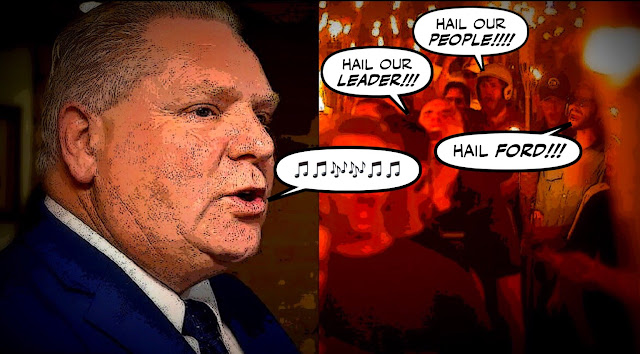 Another white nationalist is claiming that Ford is blowing a giant dog whistle and sending him and his friends anti-immigrant messages.

As well as claiming that he can help them turn Cons into fascists.

But although as I have pointed out many times before, that's not THAT hard.

Sadly for them it seems that Ford is not destined to be their Fuhrer.

For not only does he still not have a costed campaign platform.

With Ontario’s election just over a week away, Doug Ford has yet to present a fully costed platform for his party despite repeated calls from his opponents to show his plan for the province.

And although he keeps claiming he does have a plan, like the Peter Sellers character in Doctor Strangelove... 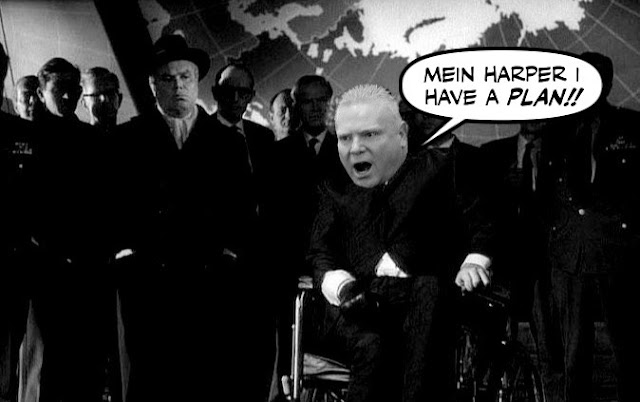 “We have a plan, we’ve put a price tag beside every single item ... but by the end of this campaign, we will have a fully costed platform,” he said.

When pressed further, he referred reporters to his party’s campaign website. “Go to ontariopc.com, go online ... you’re going to see our plan, a great plan, a plan for the people.”

When you visit that site there's nothing there.

Just a lot of promises and a lot of hot air.

And to make matters worse, according to a new poll, it looks like the great white super man is heading for a crash landing. 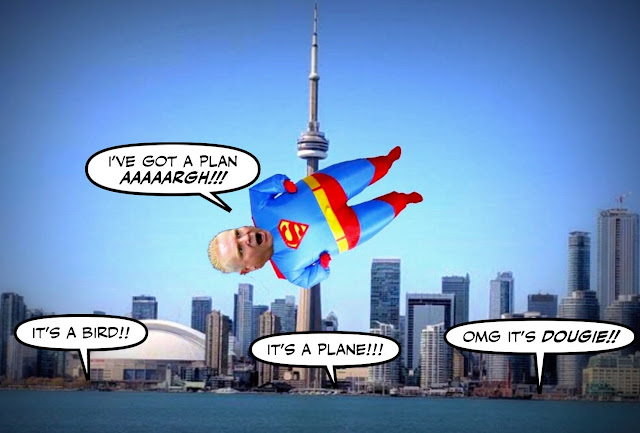 With only nine days until the June 7 election, the poll by Pollara Strategic Insights gives Andrea Horwath’s NDP 43 per cent of the decided vote, up five points from the last such poll published here six days ago. Doug Ford’s Progressive Conservatives are at 32 per cent, down five points. Kathleen Wynne’s Liberals are at 17 per cent, down a point to a level that would represent a historic low in the Ontario party’s history.


And that the NDP's Andrea Horwath is on her way to becoming the new Premier of Ontario. 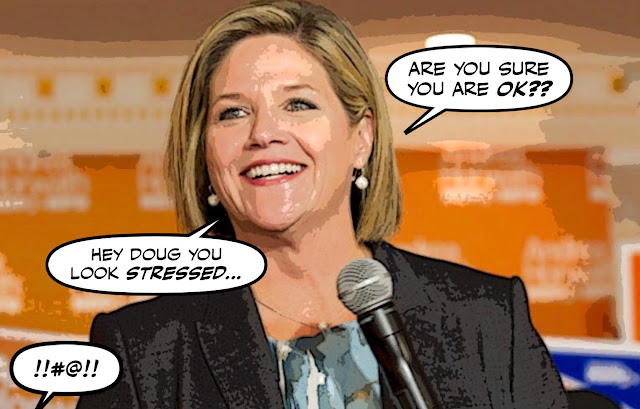 Which will only drive the Cons even crazier. Another woman and even more left-wing than the other.

And while I'm preparing to celebrate for days, I'm trying to remain as restrained and as sober as possible while I dig the Con's grave... 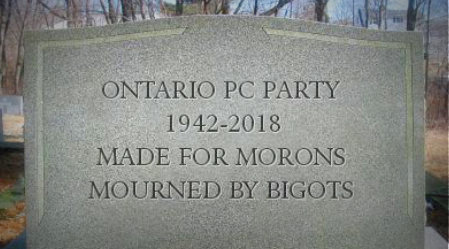 They had a TWENTY point lead and they blew it?

Looks like Jenni Byrne's reputation as a campaign guru is going to take another hit. I wonder if we'll see the return of Pierre Poutine or some other attempt to confuse voters about poll locations.

Go to OntarioPC.com. Terrific cyber, very good with the cyber. You're going to see a plan, a great plan, a terrific plan, the most incredible, tremendous plan. You're gonna get so tired of winning with this plan, because our plan is going to be winning all the time. The best ratings and really, really yuge management. Ontario is open for business, because I alone can fix it. I'm a great negotiator. I make deals. Beautiful deals. This plan is gonna Make Ontario Great Again. -Doug Ford Trump

You also conveniently ignore the other 3 polls out yesterday that have the parties in a statistical tie, as the majority have shown the last while.

Oh, and before you label me a Con again, no...I'm ABL and am confortable with any government other than Wynne and the Liberals. I hold them all to account no matter the stripe.

Dougie the rebel reminds me of Sarah Palin, one of John McCain's regrets. The 'trust me' no budget platform must be driving the true conservatives crazy who believe that planning and hard work is the route to success. True conservatives will never vote NDP but if Horwath doesn't wave too many red flags they may just stay at home.
RT

I have a plan, fool the people.

Oh, so you are a Liberal then.

They won’t. They want to see Wynne’s head on a political pike, and they will get that too.

if you support any cult of the personality who will not say what they are going to do, you are likely a conservative

Hi anon@10:50 AM....yes, I was thinking about her the other day, and I can only imagine what kind of frenzy she must be in. I caught a glimpse of one of Ford's advisers the other day, and she was screaming about how the media should be looking at the "Hitler scandal" the "poppy scandal" etc etc. Now that I think of it, it may have been Byrne, and if it was, It's only a matter of time before she cracks up again...

Hi Jackie...I did, I got exactly the same impression as you did. And since they are actually calling that glossy pamphlet their platform, but won't say how they plan to pay for it, I think it's practically fraud. Their contempt for the voters is beyond belief. And if the voters don't return the favour, they will get the government they deserve...

hi anon 11:18 AM...I have mentioned other polls, but I used the Pollara one since it was the newest, and like all the others looked at how the trend was favouring the NDP, and trend is all we really get from polls these days.

Hi RT...I don't know how many people are engaged in this campaign. In my travels around the island and in the suburbs of Toronto I have seen relatively few lawn signs for any of the parties. The TV ads are now starting in earnest, but again seem curiously muted. So I'm going to go out on a limb and predict that turnout is going to play a huge part in this election, and since the millennial vote is critical, I'm really nervous...

Hi Steve...quite right, the Cons have shown themselves to resemble cult members. They seem willing to support Drug Fraud even though he has no campaign platform. I've never seen anything like it, and it couldn't be more pathetic...

‘Big men’ tend to be a left wing thing in this county.

As you say Simon, its the turn out. Turn out in elections like this are critical. Those who are Liberals and unhappy with Wynne may sit at home. Same for the Cons. Not all are happy with dougie and may not want to vote for him. Not the first time its happened in Canada.

People might want to think about this, if dougie is elected they will have to live with him for 4 years and in some cases die because of him, (lack of medical care)

Personally I've always voted for the party which will provide me the best health care. I want to live.