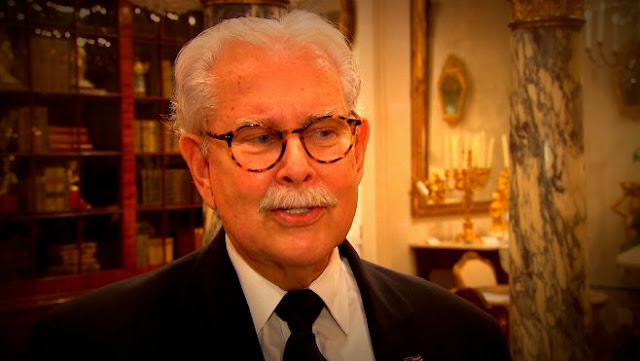 About a week ago I saw a British TV documentary where Donald Trump's former butler Anthony P. “Tony” Senecal, talked about the man he served for almost two decades.

And revealed that Trump likes everything gold, and lots and lots of mirrors.

And while at the time Senecal appeared to be a nice old man.

I'm sorry to say appearances can be deceiving. 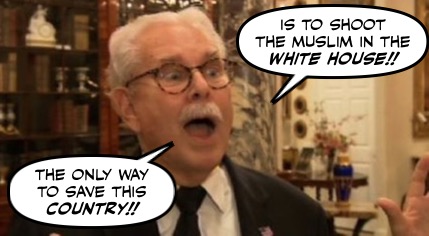 And like his former boss he is a raving maniac.

Looks like that sleezey bastard zero (O) is trying to out maneuver Congress again, if the truth be known this prick needs to be hung for treason!!!

I feel it is time for the SECOND AMERICAN REVOLUTION !!!!! The only way we will change this crooked government is to douche it !!!!! This might be the time with this kenyan fraud in power !!!!! ...[W]ith the last breath I draw I will help rid this America of the scum infested in its government--and if that means dragging that ball less dick head from the white mosque and hanging his scrawny ass from the portico--count me in !!!!!

But it does help explain why he worked for Trump for so long. Crazy old men of a feather do tend to flock together.

And since it also seems that the Donald has no real campaign organization behind his bluster.

Donald Trump is not running a presidential campaign. Sure, he is “running” for president, his name is on the ballot, and he’s likely to be the GOP nominee. But his campaign looks nothing like a serious presidential effort, and it’s one of the many reasons why it will be so difficult for Trump to win the White House.

First and foremost, Trump lacks a basic campaign infrastructure. He has no speechwriter, no pollster, a minimal press and policy operation, and a threadbare staff with no experience in a general election campaign. He is even dismissing the need for a data and analytic operation. “I’ve always felt it was overrated,” says Trump. “Obama got the votes much more than his data processing machine.”

And won't even have the money to withstand the barrage of Democratic AND Republican attack ads aimed in his general direction.

He might be a billionaire, but he will simply not have the money to push back on this. He will lack a unified party to speak with one voice in support of his candidacy, and he won’t have the resources to put in place a ground game that can compete with Clinton.

In short, he is likely to be overwhelmed by a deluge of money and negative attacks, while entering the campaign with the highest negative ratings of any candidate for president in modern political history.

Other than that, he looks like a shoo-in for the White House.

Unless he can convince people like the butler to work for him for free.

I wouldn't be surprised if these latest revelations force Trump to adjust his half assed plans to be President... 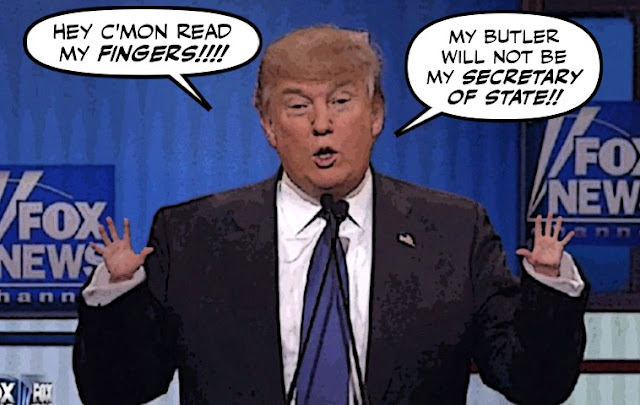 You know, when you hear how Donald Trump likes gold so much, you might think he believes he has the Midas touch.

But the truth is he corrupts everything he touches.

And it is yet one more reason he must and will be defeated...

The butler does sound like a crazy old man.

As to trump and winning the election, was looking at a poll this morning and it pretty much has Trump and Clinton neck and neck. Saunders and Trump has Saunders winning.

as much as Clinton and Saunders don't get along, Clinton may want Saunders as her V.P. just to ensure the Dems. win the election.

Paul Ryan has now decided to "support" Trump, so the party machinery will gear up and do its job. Most likely there will be prominent Republicans who won't work this election and won't vote for Trump, but he has a following and with it, he could win the election. He gets his advertising for free. Just turn on CNN any night. Trump doesn't need an organization to win the election, he has the free advertising.

They are not republicans or conservatives they are the crazy underbelly and we have some here in Canada.

Simon,do you remember Andrew Adler, editor and publisher of The Atlanta Jewish Times? A few years ago he said US based Mossad agents should take out Obama.
The Secret Service claims it is “investigating,” although few believe Adler will be prosecuted. In the meantime, Adler apologized and “resigned” as editor of his own newspaper and put it up for sale.
Seems to me that if Adler wasn't tried for treason,nor should the butler.

Life does imitate art.Recall Peter Sellers in "Being There"

hi e.a.f...I still think Trump is going to be easier to beat than a lot of people imagine. He is the political equivalent of a Potemkin village, one mile wide and only about an inch thick. He has many big demographic groups against him, and while the Republican leadership mat put on a show of unity, I suspect that a record number of traditional Republican supporters won't bother to vote...

hi anon...yes they are the extremist fringe, but there are a lot of them. And Trump is going to have a really hard time trying to satisfy them, while trying to appear more moderate. Good luck with that one...

hi anon...no I hadn't heard of that case. But there are so many death threats flying around on the internet in the U.S. and this country as well, I think the police should step up their efforts to prosecute them, scare of the other crazies, and put an end to that nonsense...

hi anon...I told somebody on Twitter that the butler reminds me of Alfred, Batman's butler. But yes, he's fir right into the movie Being There, although he could never be as funny as Sellers...