Marg Delahunty Sets Out to Save Canada 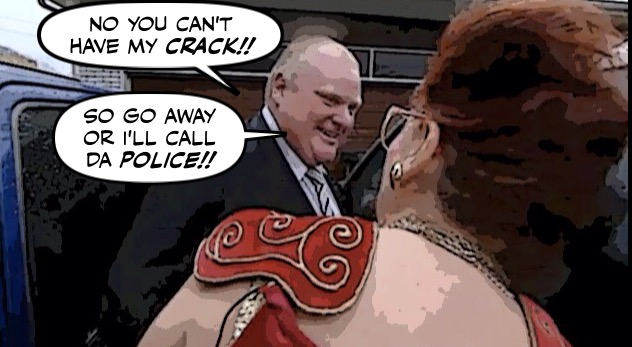 Well I'm sure you remember the time comedian Mary Walsh aka Marg Delahunty,  surprised Rob Ford in his driveway dressed up as a warrior princess.

And how that shocking confrontation ended badly with Mayor Bobo calling the police.

And I can certainly remember how shocked I was to catch her in the act back in 2004 French kissing Stephen Harper. 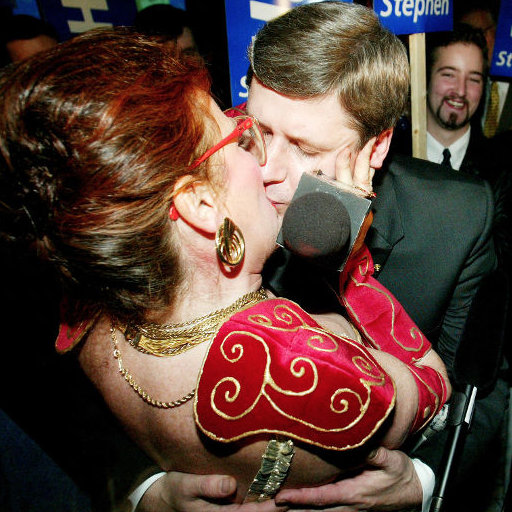 It took me years of therapy to try to forget that one eh?

But fear not, Marg is no friend of Great Leader, and she's now setting out to try to save Canada.

And all I can say is have I ever told you how much I love the people of Newfoundland and Labrador? For hating the Cons almost as much as I do. And working so hard to make that province a Con-Free Zone.

Oh I have? Many times?

Oh well in that case all I'll say is go Marg go... 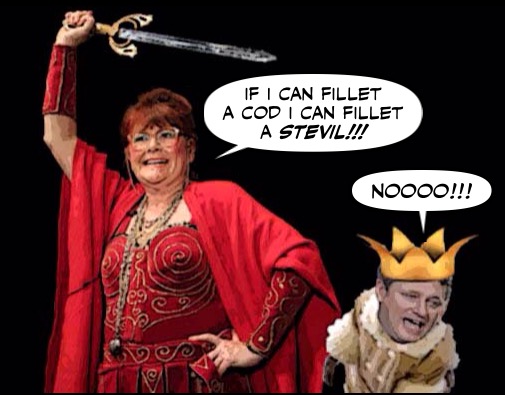 It would be nice to think that the Princess Warrior could save us, but sadly all she has is a plastic sword.

And now only our votes can save this country.

Sharpen them up and vote for Anyone But Harper...

She is great Simon, thanks for posting.

We need a francophone version of her - perhaps the Acadian Lisa Leblanc? Or someone from la Gaspésie, les îles de la Madeleine ("the Maggies" in English) to reveal the utter absurdity of the niqab scare. Say "find the niqab" among a queue waiting for a late bus in January at -25°.

But there are only 7 ridings in Newfoundland/Labrador and Harper could care less if he wins any of them, which he won't anyway.

hi Pamela....you're welcome, I too enjoyed the video a lot. In these stressful times laughter is the best medicine...

hi lagatta...I would dearly like to see a Quebec artist take on the insanity of the niqab debate. And yes unfortunately Rob Ford is still alive. His presence however has faded. And the last thing I read about him was an interview with a radio station, where he informed us that when he was Mayor he often woke up sleeping on a park bench. Nice eh? Good of him to tell us now....

hi David....it's not the small number that counts, it's the fighting spirit. The people Newfoundland and Labrador are my kind of people, decent and down to earth. And I love to see them turn that place into a Con-free zone just like the SNP has done in Scotland. Which is also a small place... ;)