Piggygate: The Horrible Story of Cons, Pigs, and Scandal 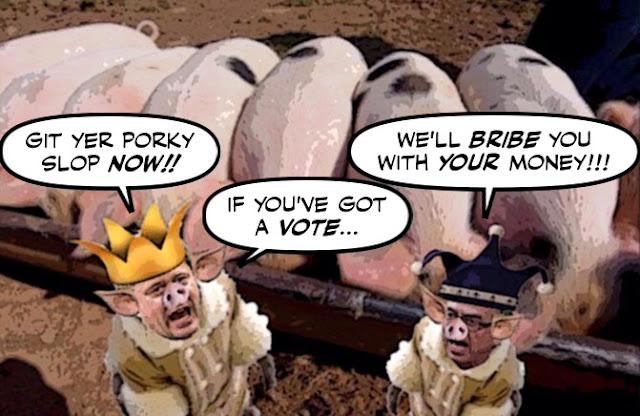 As you know I like to portray Stephen Harper and his Cons as pigs, with big snouts and pointy ears.

Not because I have anything against pigs, who are smart and gentle animals.

But only because like pigs, Cons like to congregate at the trough, and roll in the mud, and squeal in a most unseemly fashion.

However I must admit that this Con pig story has left me shocked and shaken, and squealing in horror myself !!! 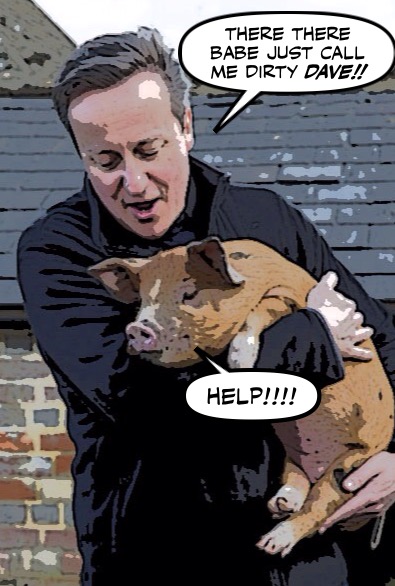 A new unauthorised biography of United Kingdom Prime Minister David Cameron has caused controversy with disturbing claims he put a 'private part of his anatomy' into a dead pig's mouth during an initiation ritual.

Although I also must say that it doesn't surprise me, since when he was at Oxford Cameron was also a member of the notorious Bullingdon Club... 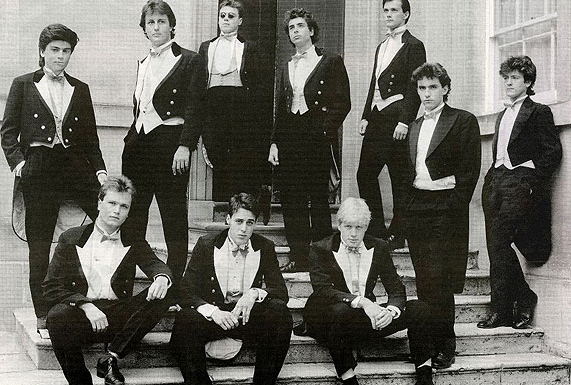 A group of super-rich Cons who liked to go out to fancy restaurants, get filthy drunk, stand on tables, shout things like "F**k the plebs."

Smash glasses and plates, and then throw large bills on the floor to pay for the damage,  before stumbling out of the door.

And what Cameron and his Cons have done to the poor and Britain's once proud National Health Service since getting their majority, can only be described as the work of beasts.

The National Health Service will crash within two years with catastrophic consequences unless the government orders an immediate multibillion pound cash injection, the former minister in charge of care services says.

Still, although I can understand why Twitter is going wild.


This piggygate scandal is something I'd rather not think about, it's just too horrible.

But since Cameron is Harper's hero, and whatever the Cons in Britain do, our Cons are sure to follow.

And since Cameron's victory was orchestrated by Harper's Australian attack dingo Lynton Crosby, I really have no choice.

Because I hate to imagine the next time Ol' Dave meets his good buddy Steve to ask him how things are going... 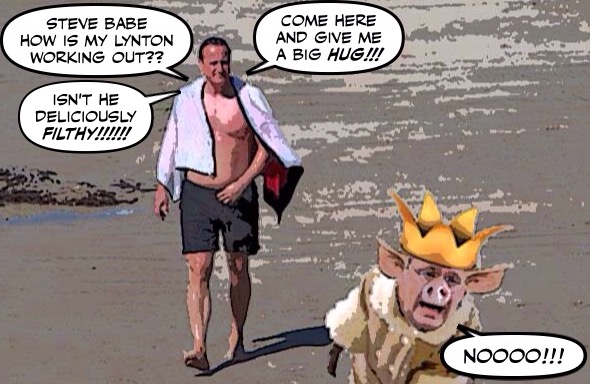 But seriously, it is a ghastly scandal.

David Cameron and Stephen Harper have so much in common, including Lynton Crosby.

They truly deserve each other...

That pig's head suffered a horrendous physical violation. Well, it's what Conservatives of all strains do - victimize those farther down the rung. And always doing so in the worst of bad taste.

Can we send Cameron the Harper gang - they would fit right in.

I'm glad you've apologised to actual pigs. They are very intelligent animals, and naturally clean. They are terribly maligned, not in quite the same way as black cats, but as a symbol for everything nasty and cruel, as well as dirty.

Remember the other Tory toff MP who was in a group wearing Nazi uniform and giving Hitler salutes in the French Alps, in a country where such behaviour is strictly outlawed due to wartime memories?

Their table was awash with so much cognac that the bill would have certainly fed a family (and allowed them a few bottles of table wine) for at least a month and probably a lot more.

Isn't the white-blond lad in the photo Boris Johnson?

Just something I read:
A pig walks into a pub and asks for a pint
The barman says "sorry pig can't understand you, if you would care to take the Prime Minister out of your mouth".

Hi Simon! It takes a lot of courage to share some of the things you do. Thank you for doing so. I knew David Cameron was low but I never knew how low. It's horrible! He goes about acting like he has so much class. He's nothing but dirtier than dirt dirt!

The entitled seem to have morally bizarre rites of passage. This could be used to symbolically prepare them for their future roles or perhaps its reverse role playing where they believe they are just mocking the behavior of the masses. Either way its rather sick and doesn't say anything positive about their views of the rest of humanity
RT

The people of G. B. voted for Cameron and his Cons and now they can live with it, or in many cases die because of it. Now many innocents who did not vote for Cameron, will die, but many of his base are not wealthy and do reply on state health care. They may come to regret voting for Cameron. Canadians ought to take heed, but most people think their "leader" will take care of them. What they don't understand is "financial elites" like Cameron only care about those in his "club" and the voters aren't part of that. No more than the average Canadian is part of steve's "club"

hi David....yes that's a good one. I can't think of a better soundtrack for this sordid story. Although I might add a few oinks... ;)

hi Anam...thank you I'm glad you liked. I can't say that I enjoyed writing it because it is such a disgusting story. But it tells you a lot about the gang of rich Cons who are driving the British people into the ground...

hi anon...it really is a bestial story, I can't imagine any decent person doing that, even if they were roaring drunk. But as you point out those upper class degenerates have no respect for those they rule over. And what they are doing to the poor in Britain couldn't be a more revolting example...

hi lagatta...yes I have apologized several times before, and not just in writing. Every time I visit the Island farm I stop by the pen of the adorable and massive Charlotte and apologize personally. However, I also point out that I primarily portray the Cons as Ikea monkeys, with only pig's ears and snouts. So they really have nothing to do do with her. ;)
And yes that blond guy in the corner is Boris Johnson, the Mayor of London, and the man who wants to replace Cameron. Great eh?
God help Britain, and God help us....

hi mizdarlin...OMG. The jokes are too funny, and too embarrassing. I'm blushing like a blooming rose and just hoping my Mum doesn't see this post... ;)

hi anon...thank you for saying that, but it doesn't take much courage. I did receive yet another veiled death threat the other day, but I just laugh them off. They can't intimate me, and I will tell the truth as I see, whether they like it or not. I'd never be able to live with myself if I didn't. But Cameron and all those other rich Tories in Britain really are beasts, they live in a world of their own, and they think they can get away with anything...

hi RT...yes, those morally bizarre rites of passage are a product of their so-called public school upbringing, schools like Eton and Harrow, and of course a product of the sexual repression of the British. The are the schools of privilege where the students are told they are born to rule, and like all rulers think they can do what they want. If I lived in Britain I'd follow Cameron around wearing a pig's head mask and oinking loudly. Which BTW I may have to do here if Harper is re-elected... ;)

hi e.a.f....it was recently calculated that about 60,000 people in Britain have died in recent years as a direct result of the cuts the Cameron Cons have made to the NHS and other social services. So when I say they're beasts I'm not kidding. The only good news is that their brutal behaviour has alienated so many people in Scotland that they have purged the Cons from that country, as I hope we can one day do here...

The other embarassing thing is that Cameron is a fine Highland name, but there doesn't seem to be any trace of Scottishness left chez Dave.

Remember Dubya Bush and the notorious élite "Skull and Bones Society" at Yale, with the Ivy League schools' imitation of their British founders' mores and sense of entitlement?

A ghastly thing is how many people, mostly elderly, die in Britain because they cannot afford to heat their flats or modest houses. Now we know that a kwh of energy for heat is more expensive there (or most anywhere in Europe) and it does get very chilly, but few places have the intense cold we get in even most southern Canadian winters, and we never hear of such avoidable tragedies in the Netherlands, which has the same damp chilly but not frigid weather as the southern UK, or Denmark, which is more like the northern regions. It really wouldn't cost much to provide heating relief to elderly, disabled or otherwise extremely vulnerable people. They aren't the demographics that waste energy.