Is A Republican Operative Trying To Dig Up Dirt On Justin Trudeau? 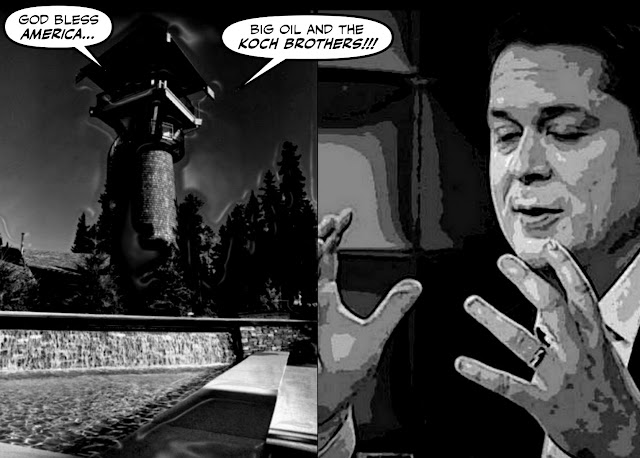 Last April Andrew Scheer had a secret meeting in a secluded lodge in the foothills of the Rocky Mountains, to discuss how best to defeat Justin Trudeau's Liberals.

The day-long strategy session, held April 11 at the Azuridge Estate Hotel in the foothills of the Rocky Mountains, brought together some of Calgary’s most prominent business leaders and high-profile Conservatives and their operatives at the invitation of a little-known pro-oil advocacy group called the Modern Miracle Network.

And one of the reasons it was so secret was the presence of a Republican operative with a very unsavoury reputation. 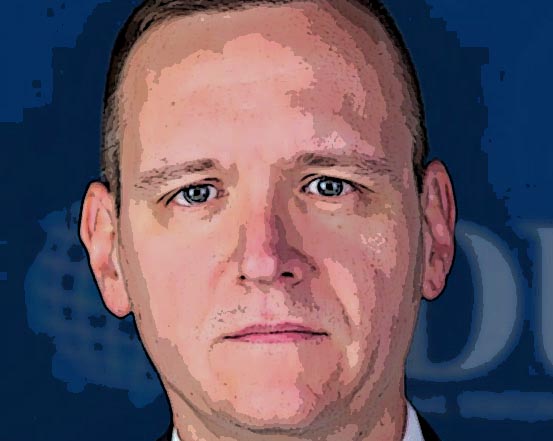 His name is Mike Roman, and he first made his reputation working for the uber right-wing Koch brothers, spying on and digging up dirt on their liberal opponents.

The competitive intelligence team is run by a veteran Republican researcher named Mike Roman, who is listed as Freedom Partners' vice president of research on the tax filing that group publicly released on Tuesday.

Roman, who did not respond to requests for comment, has worked to keep himself and his activity low-profile even within the discreet Koch operation.

One former network official said that when people were summoned to meetings at ASG’s offices, they sometimes had trouble finding the suite. “They told people that’s the way they liked it,” the official recalled. “They act all cloak and dagger – like the CIA. There was a joke about how hardly anyone ever met Mike Roman. It was like, if you wanted to find him, he’d be in a trench coat on the National Mall,” said the former official.

Then shortly after Donald Trump became president Roman went to work for him. 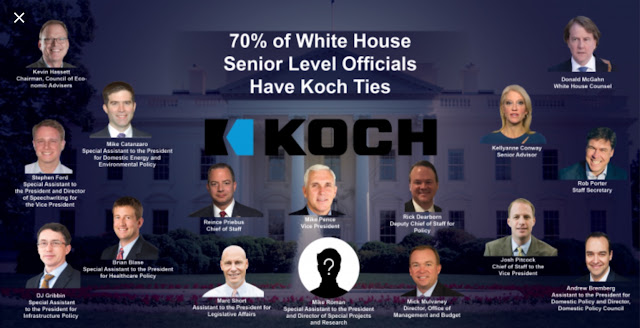 Where once again he cultivated an air of mystery.

Few people in or close to the White House have any idea what Michael Roman does all day.

“Within the research world, he cultivates this ‘man of the world’ mystery,” said one former administration official. “Like, he was the guy who you would talk to if you want to find a Hungarian hacker in Hong Kong.”

But although few people knew what he was really doing, this episode of fake news had already made him a minor celebrity in Republican circles.

Roman also attracted notice a decade ago for disseminating a 2008 YouTube video showing two members of the New Black Panther Party, dressed in black with berets and one nightstick, milling around a North Philadelphia polling station — a video that ended up being played on loop on the Fox News Network that year, personifying conservative fears about voter intimidation.

“The video was certainly used by political operatives to create this false impression of voter intimidation and fraud being a major problem,” said Rick Hasen, a professor who specializes in election law at the University of California, Irvine School of Law.


So it's hardly surprising that there are now reports that Roman is working for our Cons, digging up dirt on Justin Trudeau.

But when reporters asked Andrew Scheer the other day, what role Roman was playing on the Con campaign, Scheer pretended he'd never heard of him.

And got really annoyed that anyone would dare ask him that question.

Which isn't surprising, considering that the ugly American Scheer needs a connection to a Republican dirty tricks operative like Roman, like he needs a hole in the head.

And then there's the embarrassing fact that Roman is the treasurer of Stephen Harper's International Democratic Union. 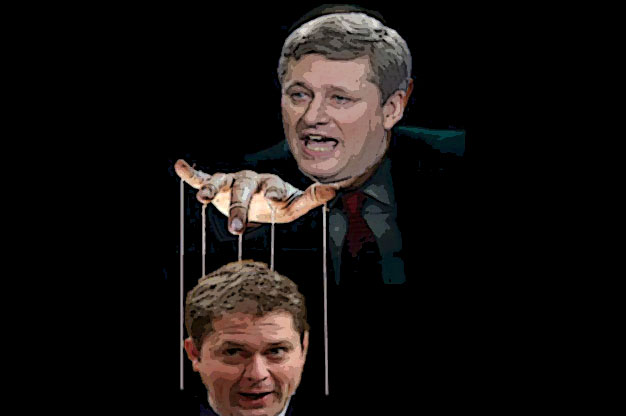 So the circle, or the conspiracy, is complete.

You know, ever since Scheer became Con leader I have warned that he was more American than Canadian, and more of a Republican than a Conservative.

But I was never able to get anybody in the MSM to take a closer look at who exactly are the Cons behind the curtain. And now it may be too late.

Scheer and his Republican thugs and religious fanatics are preparing to steal the election. While progressives fight themselves.

And the country we love so much could soon be just a memory...

I think Kinsella is helping them out. He has another stupid fucking op-ed in the Sun insinuating about "inappropriate conduct." If shit goes sideways for Canada, Justin Trudeau and the Liberal Party should be prepared for legal action and maybe more. I hope he and/or Gerald Butts has Hillary Clinton and/or prominent Democrats on speed dial, because there's going to need to be a concerted effort to clear Justin's name. Have they read "What Happened"? Because something smells like a rotten orange in here. I'm so sorry, Simon, that my country is doing this to yours. Bear in mind that this fight isn't over. I love Canada and I love Justin and there are still lots of us who won't let these fuckers get off without consequences. Don't believe me? It's Trudeau!

Why our weak press does not have this as a headline, Repulican Rat works for Harper and Scheer.

Relax. Roman's stuff was already leaked to Time magazine. Advance polls open on Friday. If the Cons had anything else we'd have seen it.

If you go to the top of buffalo chronicle, the JT and the 17 year old tale is still the first story. The second is one about Elizabeth Warren paying some guy for sex.

Maybe it's the same story? Elizabeth Warren is JT's Mrs. Robinson! Say it ain't so! 🤐

Scheer knows he wont get elected on his own merit, or better yet, lack thereof, so the continuation of the Con attacks, fake scandals, etc. that began with Harper and have sunk our politics into a GOP shitshow is now the norm. It's no surprise that they've employed Roman the Homan to manufacture dirt on JT. Dirt calls dirt, mix with water and fling the mud.
The Con media is just as guilty for allowing this to fester so they and their corporate masters can revel in the cash infusion of the almighty click of a mouse. I hope there's a special place in our history books and hell for these assholes who sold their souls for the sole purpose of enriching themselves.
Integrity is a trait I most admire in a person and it is people with integrity that will right this wrong and people with integrity that will be offended as I am by their modus operandi of division, delusion, derision, with zero contrition as they slither their way down their road to perdition.
JD

The MSM has yet to follow up on this story even though Scheer is obviously guilty of hiding the truth. If on the other hand Justin Trudeau was employing Republican smear artists can you imagine how they would be behaving? Thank you for trying to expose the dirty dealing Cons, and please don't be discouraged.

I don't see or foresee any of them being held to account for anything unless it would involve child molestation or animal cruelty.

Scheer is running exactly the same political campaign that Dougie did. The same message " Vote for me, I really don't have a workable plan but will right all the inept crooked wrongs of my predecessor". The only difference is Scheer is downplaying austerity and baiting the hook with minor tax relief especially for those that don't need it. Its understandable why the wealthy, almost wealthy and special interest fringe groups support the Reformacons but why the have-nots and almost have-nots support their own economic destruction is a mystery. Is as if they want everyone to share their misery rather than accept a helping hand to help lift them out of the hole they find themselves in. A political road map on how to capitalize on a negative human trait. Its certainly all about the journey and not the destination!

They're up to their same old dirty tricks again, the intent being to throw off JT before tonight's French-language debate.

I hope it's nothing and/or French Canada is smarter than the squirrel-chasing Americanized English Canada media. Plus hockey is on tonight, Habs home opener. What I didn't expect is to be watching a hockey fight and a dirty election break out.

So the Trudeau "sex scandal" has been thoroughly debunked. Good reporting by National Observer. Disgusting that Elections Canada can do fuck-all because it's not deemed foreign interference.
https://www.nationalobserver.com/2019/10/10/news/fake-justin-trudeau-sex-scandal-went-viral-canadas-election-integrity-law-cant-stop

See also "Anatomy of a Manufactured Scandal" in The Toronto Star.

Unfortunately, the damage has been done with the fake scandal having already reached 25 million people and counting. Not holding my breath waiting for a mea culpa from the Globe and Mail and other sleazy Con media that gave the story oxygen.

Right-wing hack Candice Malcolm and her astroturf "True North" Infowars outlet are promising another "scoop" and the Cons are scheduled to make "a statement about Justin Trudeau's past behavior" prior to the debate. There's another Buffalo Chronicle bullshit article today alleging a six-figure NDA. These are not journalists. They're smear artists and liars out to destroy a good man's life because they can't win fairly on policy. They need to be sued into oblivion and exiled from civilized society. God, but do I ever hate these people with the fire of ten thousand burning Toronto Suns.

I'd vote for Shiva Fournier if she promised to shut down the fake news media and kill the Internet.

So here's the "scoop" they're running with now. I won't share the URL but if anyone wants a head's up at what's being thrown around, it's disgusting, and it's guilt-by-association.

Candace Malcolm is all innuendo. If the Cons actually link to her story then they must be desperate. And, I think Canadian voters will think even less of them. They'll lose soft Cons to the Liberals and hard Cons to the PPC - especially in Quebec. Let's face it,you're going to go with this right before a french-language debate? Scheer will get creamed.

Also, Andrew Lawton writes for Malcolm's "True North" crapsite. He was let go from a MSM radio station in London, Ontario - due to downsizing, but I suspect he was picked because he was becoming too toxic. Dougie picked him to run in the London West riding for the PCs in the Ontario provincial election. He claimed all the bad stuff (Islamophobia, etc.) was in the past due to "mental health issues". He got creamed by the NDP. Well, he's obviously back at it, but now with Candace.

Kinsella has such a hate on for Trudeau that it seems pathological. Hell, even Chretien has been campaigning for Justin. When Trudeau wins on Oct.21st, Warren is likely to end up institutionalized.

I hope you're right and Trudeau wins the "battle of Thanksgiving" as Nik Nanos calls it (the family sit-down dinner discussion). Mainstreet has them tied -- literally tied as in nobody has enough seats to form government, according to their latest projections. Thanks largely to Jughead and the Separatists, the worst Canadian garage band ever. What a shitshow this election is turning out to be.