Andrew Scheer, #Brokergate, and the Shame of the Con Media 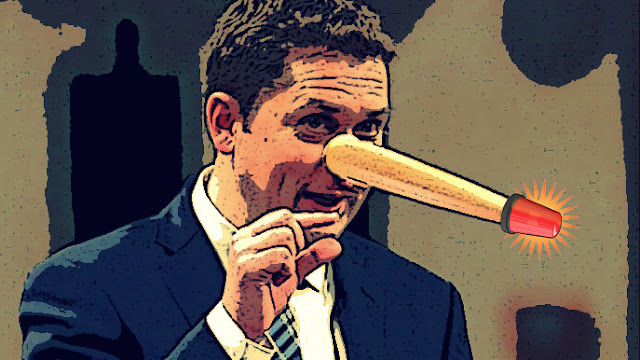 Andrew Scheer is such a serial liar that I once designed a flashing light to place on his pointy nose, so he didn't take someone's eye out.

But our shabby Con media never calls him a serial liar, and this latest big lie, this #brokergate, is no different.

They made a huge fuss about Justin Trudeau dressing up as Aladdin, but Scheer falsely claiming that he was a real broker has failed to move their outrage meter.

So if those Con clowns can't do their jobs, maybe a real clown can do better.

And sure enough Mark Critch did a better job than our shabby Con media.

But I'm still hoping they will redeem themselves before they are accused of helping the Cons to steal the election. And finally say it like it is:

Andrew Scheer is a grubby Con artist, and totally unfit to be prime minister...

Maybe it's because nobody expects either the truth or competence from Sheer-incompetence.

Only the jesters dare tell the truth!

.. c'mon Simon .. nobody ever said truthtelling was part of being a career political animal.. its more about the posturing, the preening.. the pretending you're a Public Servant .. paid and pensioned by us. Can anyone explain, how Scheer became a multimillionaire ? Inside trading some say.. he joins Kellie Lietch, Tony Clement, John Baird, Stephen Harper.. hell, his entire cabinet.. including Rona Ambrose..

I believe the Prosperity Gospel disciples aka the Holy Profits of Mammon refer to this as a... "collection basket."

In God We Trust, All Others Pay Cash™!

Simon, are you going to do a write-up on the TVA debate? From what I gather, weak Andy's French sucks and he's about to go 0 for 2 on debates in 2 languages. Also, going after SNC isn't exactly a big vote-getter in QC. He fails to read the room just like he fails at everything else.

How forgiving of our Con media to give Andy a pass for lying on his razor-thin resume or for perpetuating a fraud against Canadians. One can only imagine the outrage if it was JT caught doing the same thing.
I've learned in life that it's the little things that matter and for better or for worse, putting them all together reveals the true sum of one's parts.
JD

Scheer has publicly admitted that he is against abortion, after a proper goading from Jagmeet.