Andrew Scheer and the #Brokergate Scandal

Andrew Scheer took Sunday off, no doubt to try to calm his shattered nerves. Discuss the state of the Con campaign with his ex-Rebel MiniMe Hamish Marshall.

And of course, figure out what to say to the media, if or when they asked him to explain why he had once posed as licensed stock broker.

And I mean posed.


Andrew Scheer's been caught faking his resume. He said he was an insurance broker, but "he was not," reports the Globe and Mail. Scheer never got a license. Watch this video and ask yourself...why does he now say he was something he wasn’t? pic.twitter.com/zWbeTlk9hQ
— Jim Carr (@jimcarr_wpg) September 29, 2019


He has been caught pumping up his past like a balloon...

Andrew Scheer claimed he was an insurance broker, but the Globe & Mail reports “he was not.” Here’s Scheer on video claiming he got “higher levels of accreditation” in the insurance industry…even though he didn’t. He faked his resume. Watch below: pic.twitter.com/YcSgorYuQf
— Marco Mendicino (@marcomendicino) September 30, 2019


Even though as even Bob Fife had to admit, Scheer was nothing but a glorified gopher...


So needless to say some of the reviews have been brutal... 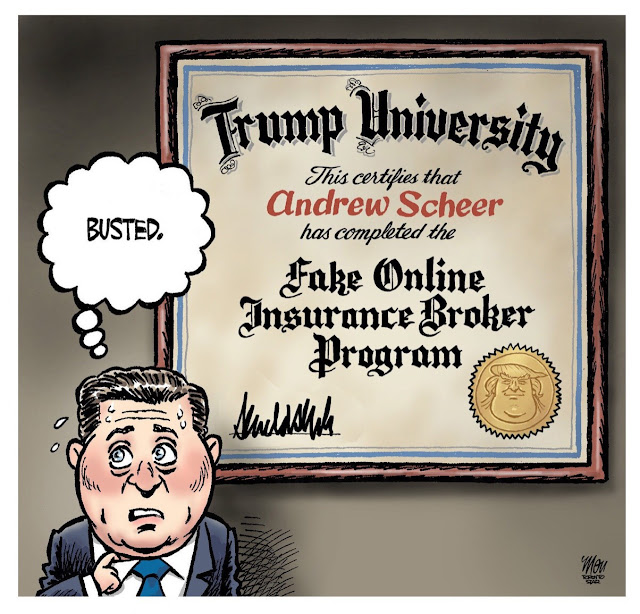 Jelly boy Scheer is getting quite a workout... 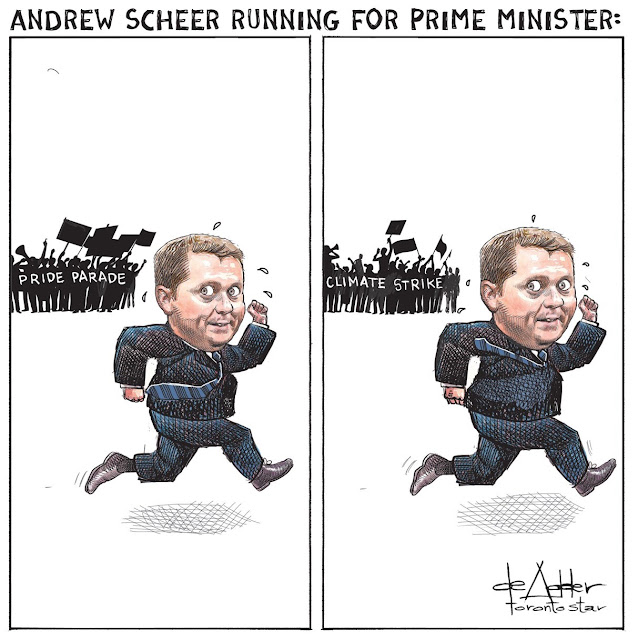 And was even forced to hide from the scummy Rebel reporter David Menzies.

It took two police forces on Monday to get the far-right Rebel Media escorted as far as possible from Andrew Scheer.

The scene morphed into the Exiling of Conservatives With Extremist Baggage Act, with Scheer’s handlers keeping their leader sequestered for a 30-minute delay to ensure no face-to-face encounters with the barred correspondent.

Which at least produced the funniest lines of the day:


Best comedy line of the campaign day so far:

Rebel bigot David Menzies: "I thought you were going to call the police!!!"

And had me at the end of the day, as I flew back from Montreal, trying to sum up Scheer's #brokergate scandal this way... 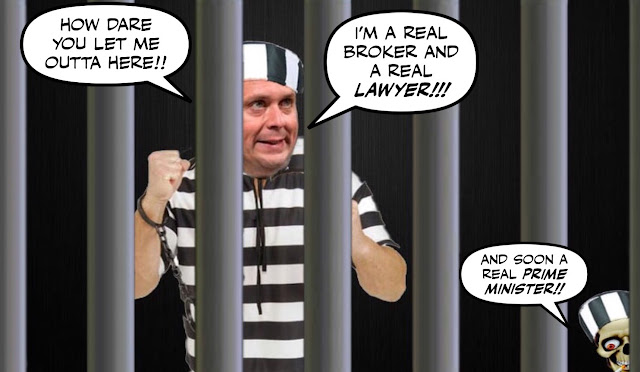 If our shabby shuffling media had done a better job, the serial liar Andrew Scheer would have been busted long ago.

Their failure to do so has endangered this country.

But the truth about Scheer is coming out at last, he is indeed #NotAsAdvertised.

And after cruising through the last two years, he is in for some rough seas ahead...

In the hands of the god’s pic.twitter.com/ZMhrPToceJ
— CCTV IDIOTS (@cctv_idiots) September 30, 2019

weak andy weak resume, he has never even been trusted to be a cabinent minister

The Beaverton callex it the most boring Scandal ever, this is going to have no impact.

It's not a good day when Scheer has to hide from a Rebel reporter or when Fife takes a break from attacking JT to call Andy a gopher. He's not only #Not As Advertised, he commited fraud against Canadians, his caucus and should be fired as leader of the opposition. What an idiot to think no one would check his "credentials" and I now wonder if he even graduated from high school. That would leave his wall of achievements pretty bare except for his Master's degree from the University of Harperscrack.
I can't wait for the inevitable questions from reporters(and I'll probably piss myself laughing), " Mr. Scheer, can you give us a quote on this insurance scandal please!?"
JD

Received my Election card in the mail yesterday.....I've never been more cynical about a Federal election in all my voting years!

Maybe, maybe not but one thing for the Liberals to exploit, and fence-sitters to chew on and think about as part of a whole composite. The only thing real about Fake Andy is his craven ambition and willingness to lie. Some "Christian" !

You would think a real ( no really I'm important ) live insurance broker would insure he was never embarrassed by his lack of acomplishment.

Scheer is a mini Trump living in a virtual reality where facts are just a minor inconvenience to be rectified by applying the right spin. Once they were known as serial liars but now its just alternative facts. A common denominator is that they never ever admit they were wrong and apologize. Perhaps there is some reverse logic at play where people believe all politicians are liars so its better to support one that is a known unapologetic serial liar than others that pretend to be honest by admitting mistakes. A winning formula; set the political bar real low and then select the one that manages to crawl under it.

He's not only hiding from Rebel. He's hiding from Doug. Even con hack David Akin is taking notice after a group of autism moms tried to ask him questions and they were removed from an event -- at a center for disabled children. Not as advertised indeed.

Hi Steve....If he wasn't the candidate of Opus Dei and the religious right he'd be handing out Bibles on a street corner, or selling popcorn at baseball games like he once did. But thanks to the Con media, and low IQ Canadians he could become our next prime minister. What's wrong with that picture?

Hi Gyor...Are you seriously quoting the Beaverton? Do you know that it's a satirical publication, something like The Onion in the U.S. If lying about your credentials isn't a scandal what the hell is? Could we really trust a Con artist like Scheer with our money? I don't think so...

Hi JD....Yes, I thought yesterday was a wonderful car crash. The Cons have rarely looked dumber or more desperate. The next time I see one of those ghastly Con ads claiming that Scheer wants to put more money in our pockets, I'm going to ha e to ask myself this question: our pockets or his? Hey Con man come back here!!!!! 🏃🏃🏃

The attached article by Michael Coren accurately sums up the type of PM Scheer would make. https://www.thestar.com/opinion/contributors/2019/10/01/why-andrew-scheer-would-be-a-dangerous-prime-minister.html

The Wikipedia backgrounder on lying Andy is priceless. Wonder how long it will take Hamish to fix it? https://en.wikipedia.org/wiki/Andrew_Scheer#Early_life_and_career