Why Andrew Scheer Was The Big Loser Of The French Debate 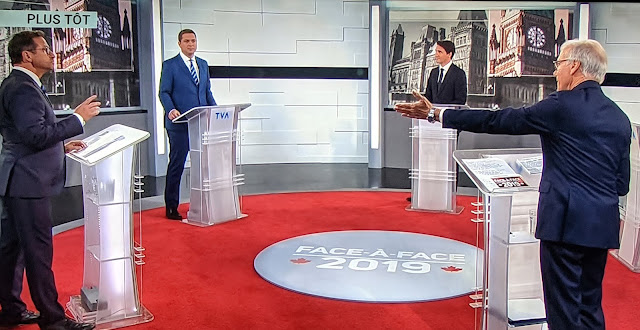 Before last night's debate began, most of the pundits were predicting that all of the other candidates would gang up on Justin Trudeau.

And that he stood to lose the most in a province he needs to win if he hopes to hang on to his majority.

But as soon as debate began, it was Andrew Scheer who found himself getting beaten up by all of the others. 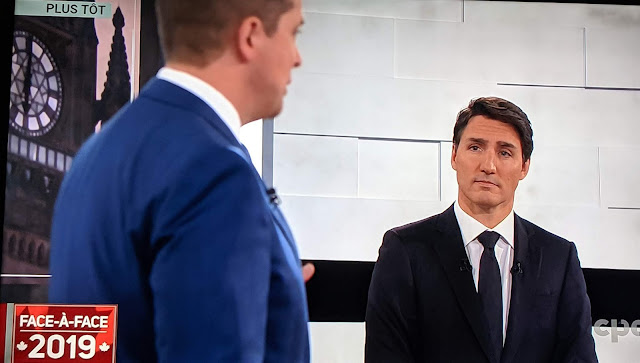 And Trudeau had him on the ropes right from the start.

Trudeau started the night on the offensive, trying to pin Scheer down on issues like same-sex marriage and abortion.

He repeatedly asked the Conservative leader to state clearly what his personal feelings are on these social issues.

"Answer me this — do you believe women have the right to choose? Yes or no," Trudeau said.

And when Scheer couldn't come up with a straight answer, he just about lost the debate right there and then.

Trudeau also scored quite a few extra points by reminding Quebecers that Scheer is just another version of Stephen Harper, who Quebecers still loathe with a passion.

But it was Scheer who finished himself off, first by trying to sell Quebecers on his absurd "Energy Corridor" idea which is as popular as syphilis in Quebec.

And then by trying to attack Trudeau with the SNC fake scandal, which earned him a tongue lashing from the Bloc Québécois Leader Yves-François Blanchet.

Blanchet attacked Scheer for his rhetoric during the political scandal and chastised him for not standing up for the company's Quebec workers. The Bloc leader has said thousands of jobs could be lost if the company is convicted on federal corruption charges related to its work in Libya. He said Ottawa should use all the powers at its disposal to protect Quebec companies and to keep the headquarters of major firms in the province.

As well as giving Trudeau the chance to tell Quebecers that he is their champion in Ottawa, which left Scheer looking like he was about to scream with frustration. 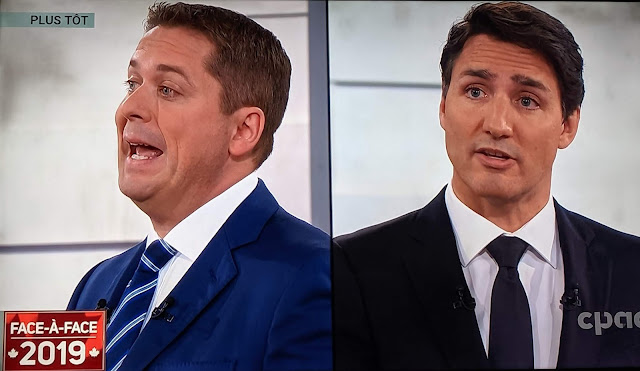 The creepy religious fanatic did try to create another fake scandal by trying to make a big deal out of the fact that the Liberals are using two campaign planes.

Even though the Liberals used two planes in 2015, and they bought carbon offsets for both planes unlike the Cons. So Scheer and his gang are only shooting themselves in both feet, and looking like children.

As for the Bloc leader Blanchet, he put in a very strong performance which might earn the Bloc a few more seats in the province. 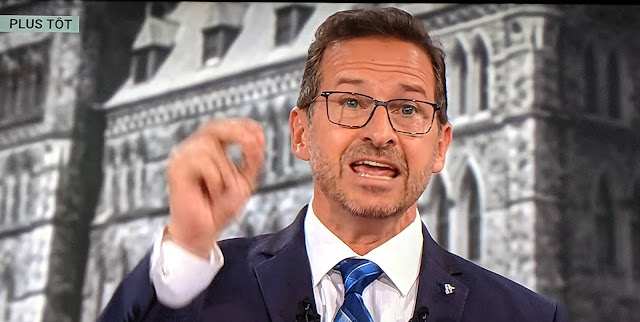 But by beating the separatist drum near the end of the debate made sure they won't be many, because that's the last thing most Quebecers want.

As for Jagmeet Singh he also did quite well, but probably not well enough to save any of his seats in Quebec. 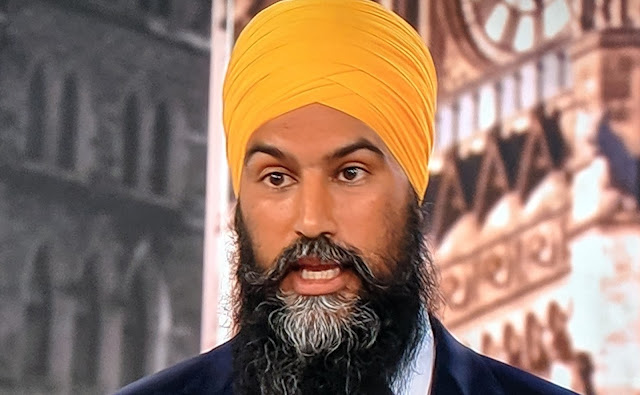 And by the end of the debate, like Scheer, he was visibly fading after all that French.

As for who won the debate, I'm not sure anybody did.

But the verdict of the Quebec media was unanimous: Scheer lost. 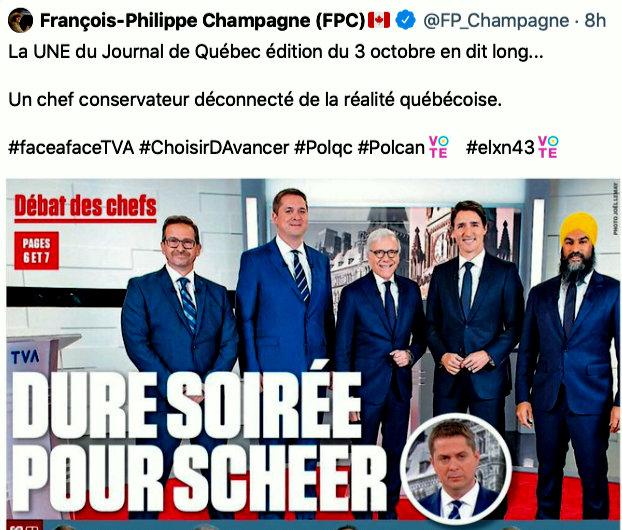 As the front page of the Journal de Québec said, it was a "hard evening for Scheer. A Conservative chief disconnected from the reality of Quebec."

Which couldn't be more brutal and made this claim from the Cons look absolutely ridiculous. 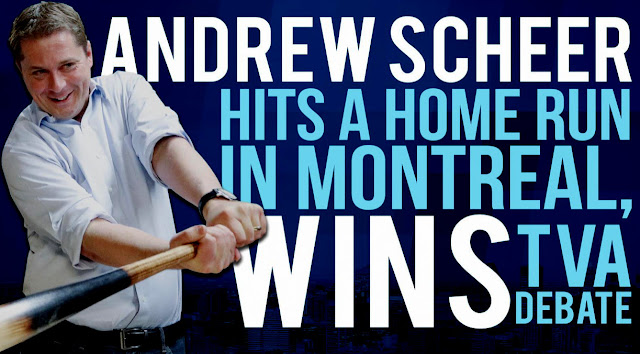 As for me although I was glad to see Scheer made to look like a fool, I was disappointed that Trudeau played it so cool, and didn't hit him as hard as he could.

Didn't ask him for example why he once wanted to jail LGBT Canadians, or why he faked his resume, or just why he lies all the time.

Take aim at his Con foulness, and hit him where it hurts... 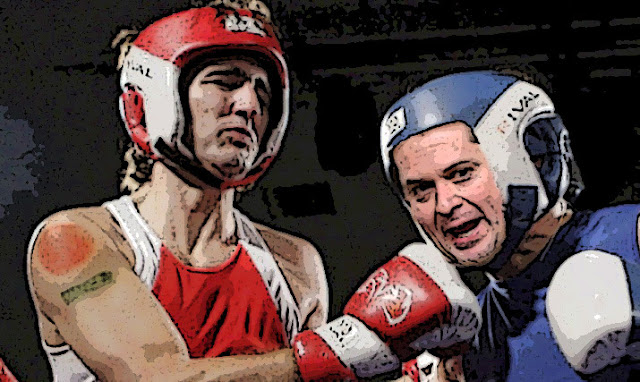 .. awaiting word from the Registrar at University of Regina. My request is re any degree granted to one Andrew Scheer. The story I hear is that there is no degree. We know he was never an insurance broker now, business career ? What business career.. ? If he lied about completing a degree he's toast. Show me, show us.. the degree Mr Scheer ..

The ironic thing about two planes is that it is a good time management move, a best practice. So the free market con is criticizing Justin for being a superior time manager.

Don't forget Justin brought up Dimebag Doug and his Oilbertan partner in slime as weak Andy's puppeteers. Justin Time for Halloween! Quebec hates Jason the greasy swamp creature maybe even more than they do Count Dougula! How do you say the Trump quote in French? Non marionette, non marionette, you are le marionette? If Lying Andy's con game (and the pending school strike in Ontario) catches up with him and dooms his chances on 10/21, it's going to be funny to watch Pierre Trudeau's son enter into a minority coalition with the Quebec separatists as the Albexit farce gets going. Paging Alanis, isn't it ironic, don't you think!

Another idiot move by Sheer-malice. Take back to money from those nasty indigenous kids who had the gall to be sexually abused by the so called child welfare system. Goes along with calling first nations hostage takers.

What a good christian.

"I was disappointed that Trudeau played it so cool, and didn't hit him as hard as he could."
I didn't watch it but will watch the English debate and I believe JT will hammer Scheer with both barrels, Simon. Given how pathetic a performance Scheer put on display and knowing JT is all about saving Quebec jobs, the voters of La Belle Province will stick with JT. To them it will be "better the devil you know".
JD

You may be correct. I guess debates actually do matter. New Nanos this morning shows the Cons dropped 5 points in Quebec while the TruGrits and BQ made gains. Hopefully two more debates (including another in French where he'll have to fight off not only Blanchet and Trudeau but Bernier), plus the ongoing headlines of his disloyalty and deceit, and the possibility of an education workers' rebellion in Doug's fiefdom, ends up being the end of his American dream and with it, Canadians' worst nightmare.

Steve,
THANK YOU for providing our side with the perfect weapon!
An easy to remember, catchy and compelling political slogan that can be liberally applied as a response, in any discussion/argument/explanation/debate about the upcoming election with anybody and everybody. And, your reply has the added impact of being hard for the recipient to forget. :)
Would make a great billboard, and bumper sticker, as well.

Hi salamander....Good for you. Scheer is starting to remind me of one of those Russian dolls with one lie hidden under the other. I don't know whether it's his Opus Dei training, but what I do know is that it makes him unfit to be prime minister...

Hi Steve...complaining about two planes in a country as large as this one, is absolutely infantile. And the glee with which the Cons react do to this non news was totally obscene...

Hi rumleyfips....As I've said before, I'm an atheist but I consider myself to be a much better Christian than Scheer. He is a cruel man, and the kind of Christian who would have happily worked for the Inquisition....

Hi JD....On second thoughts I think Justin played it just right. After all the Con propaganda trying to portray him as a wild man, he projected a calm and dignified image. In the next two debates Mad Max will be there to attack Scheer, and all I ask from Trudeau is that he ask Scheer this question: Why do you lie so much?

Hi Jackie....yes, I'm hoping the next two debates will favour Trudeau, since hopefully the moderators, who I believe are all women,will be able to correct Scheer's lies. The moderator of the French debate did a great job of keeping things moving along, but he did not correct Scheer who was able to get away with all kinds of lies.