Justin Trudeau and the Con Apocalypse 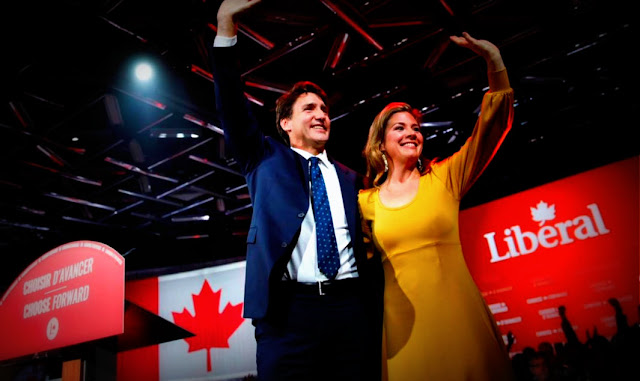 It's been almost a week and I still can't get those amazing election night sights and sounds out of my mind.

And of course the piercing screams of Cons in pain.

Because for many of them it really was a Con apocalypse. 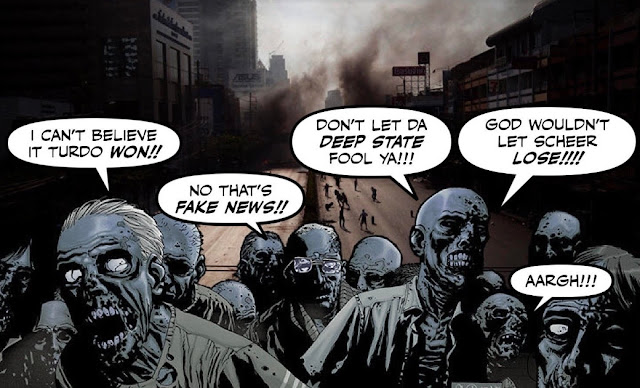 As the Anti-Racist Canada blog reports, so many far right groups were sooooo sure that Justin Trudeau was going to be defeated.

They were genuinely confident that on October 22, 2019, the Liberals would not only be defeated but that the party itself would be destroyed, Trudeau would be arrested, tried, and executed for treason (though the reasons they provide for said "treason" were always nebulous and usually amounted to "I hate him so much!!!), and the "old stock" Canadians would then drive the swarthy hordes of immigrants and Muslims into the sea ushering in a new conservative dawn.

That when Trudeau won they were devastated:

I spent time watching these groups this past Monday as the results came in and the members were genuinely shocked that what they expected didn't happen. Despite polling that suggested a Liberal minority government, they refused to believe the "fake news." They had lived in an echo chamber for so long that they simply couldn't conceive that the political party and the man they so despised wasn't hated by others.

It was such a Con apocalypse, so many Cons were weeping like babies, or loudly grinding their teeth, I don't think the grubby Ezra Levant and his Rebel hate mongers will ever recover... 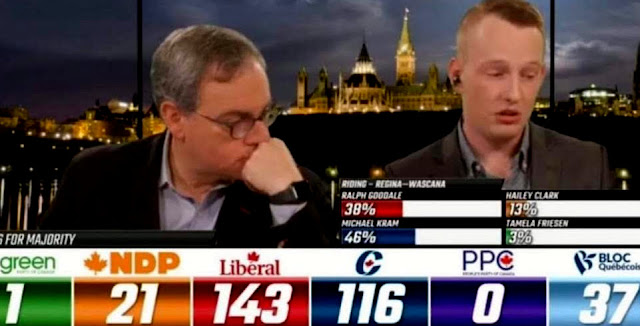 And as you can see from these kooky Facebook exchanges, Con paranoia is off the scale.

Pierre Desormeaux "Those who haven't ignored history knows what's coming and will be prepared...keep your powder dry."

John Wiseman "UN planes bringing an army in north Alberta as we speak."

Carol Lambert-Vance "I agree Duke Willis! Even this old lady can shoot, and I won't lose a second sleep over it!

Those crazy Cons really do believe that Justin Trudeau, backed by the U.N. and ISIS, are after their guns, and want to impose Shariah law. 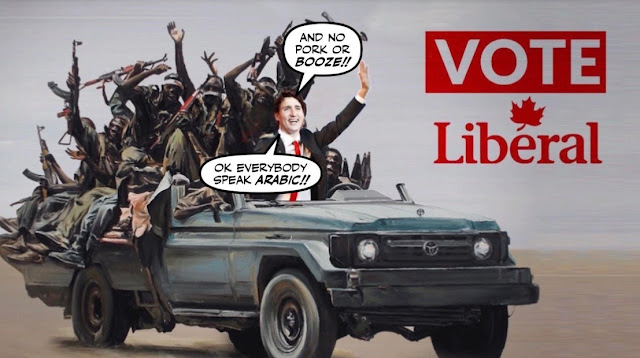 But then so is the way the religious fanatic Andrew Scheer is still clinging to his delusions... 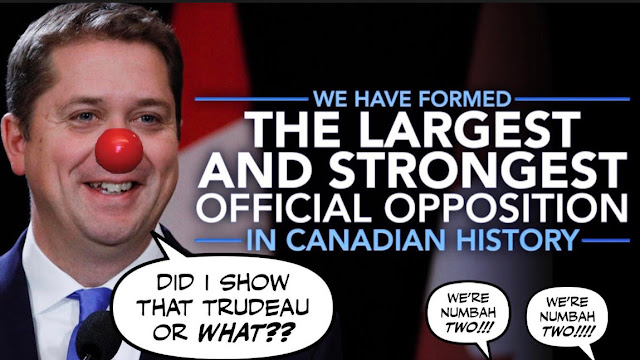 By trying to make us believe that he's a winner instead of a loser.

Instead of sharpening their knives. 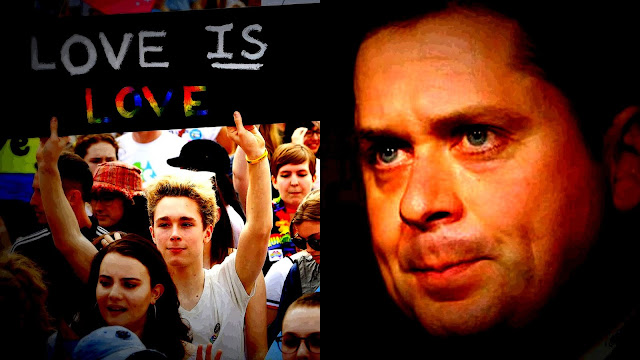 Gay people won the right to marry because once you work your way through the basic principles of our society, it’s clear that there’s no good argument for preventing it. They took longer to achieve, but gay rights were as inevitable as the abolition of slavery and the universal extension of the voting franchise.

History is never going backwards on gay rights, and this is something that Andrew Scheer simply has to get his head around. If he can’t, or if the people around him can’t convince to at least pretend like he’s done so, he has no business leading the party, let alone leading Canada.

His almost genocidal hatred for LGBT people, is deeply disturbing. And with every passing day it's becoming only too obvious that Scheer also can't be trusted to protect the rights of women.

A solid majority of Andrew Scheer’s new 121-member Conservative caucus have the blessings of Canada’s most hardline anti-abortion groups.

So I shudder to think what might have happened if the Ugly American and his RepubliCons had won a majority... 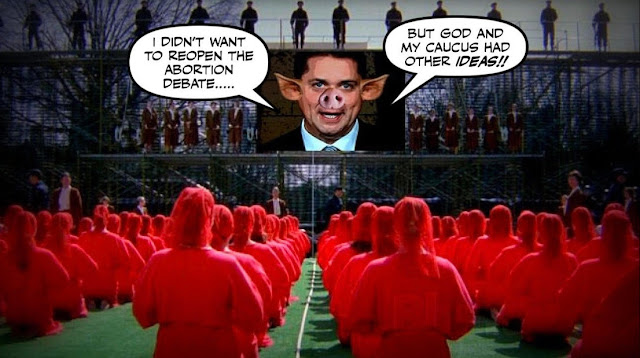 And since that nightmare hasn't gone away, and Scheer might not go away any time soon.

I think I'll stick around too...

You know, the year 2015 was the beginning of a new and exciting chapter in Canada's history. 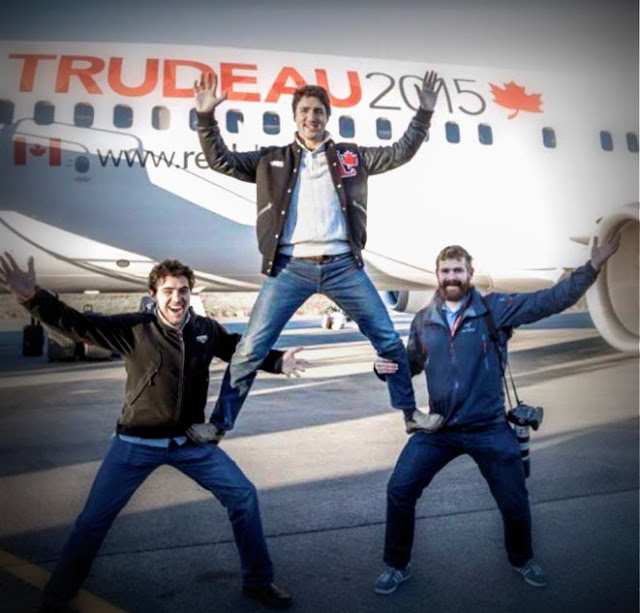 But I'm sure there are many more exciting chapters waiting to be written.

And in the meantime, if you come across a Con screaming in pain, or some other dirty old toxic Trudeau hater jumping up and down and shouting "Oompah, oompah, oompah !!"

Don't forget to say, we won you LOST. Loser.

Thanks Simon for your excellent posts and coverage of our Canadian politics. What a relief to keep the Cons at bay...for at least four years. We'll be back at it in four years but until then...keep on keeping on!

Yes, it is a miracle, and I hope this time around the smaller progressive parties can put aside their differences and work with the Liberals instead of attacking the wrong "competition." Scheer is like the bastard child of Pence and Trump. He has all of Pence's beliefs with Trump's habitual lying and even language patterns. "We came in second and it was yuuuuge!"

Yankee go home is all I can say, and I don't even want him in my country but I'd be glad if he got flushed with the rest of the Republican swamp. Including Ted Cruz for that matter, the greasiest Oilbertan swamp creature this side of Jason Kenney. I'd love to read your take on Wexit, by the way. I'll bet weak Andy thinks that joke of a troll movement is cool.

As for Trudeau's Canada, sunny ways are here again and I hope they stay that way for a long time. Because it's 1972.

Looks like the right wing nut jobs didn't get the PM they diserved but got the one the needed.

Thank you Simon for giving me a chance to laugh again after that nightmare election. Trudeau,Trudeau,Trudeau. Muahahaha. ��������

It is odd that their spin is "we're #2, we're #2", however, in a way, they did win. Scheer, Harper, Kenney and the rest of the Harperites have managed to divide this country into a Canada with a bowel obstruction in the middle. Yes, their liberal hating provinces of Albertaskwan. A pitiful horde of east hating ingrates that are simply impossible to appease. They blame everything but their Con leaders, big oil and themselves for their predicament. Even if Trans-mountain is given the green light, they'll still moan for more, more, more. How could they not? Their "leaders" said so, that's why not. Now that is one fucked up version of lead by example.
Not to take away from the spirit of this blog, Simon. I am still elated, no, ecstatic one week after Scheer's defeat and when one considers what the smirky clown Scheer would have attemped as PM, I'll take the bowel obstruction for now but there is a cure for that and if it means a double flusher down the road, then so be it.
JD

I cant believe I forgot to mention my two thumbs up for your undaunted determination to keep fighting the fight, Simon. Awesome.
JD

Years ago ( decades ago ? ) I heard a joke about a prairie farmer. When a swarm of locusts ate his wheat crop, he looked up, shook his fist and said " goddamn the CPR ". Apparently they still need someone to blame , whether they have anything to do with it or not.

As you pointed out Simon, the Cons were so sure they were going to win. Scheer even said he was going to win a majority. So no wonder they are so bitter. I was reading some of their Facebook stuff and it's clear that they are shitting themselves. Serves them right.

Hi anon....Thank you, I have no intention of quitting until I am satisfied that the Cons no longer threaten this country and its values. They are an alien formation and nobody should relax until they are buried in the garbage can of history...

Hi Jackie...Scheer is indeed more American than Canadian. He would like to be the leader or the Pope of the religious right movement, and will say or do anything to try to achieve that goal. He doesn't seem to understand that he is well past due, and that only in a place like Albertonia or Sasquachewan can his views hold sway. I look forward to his slow and painful destruction.

Hi rumleyfips....As I said in my post, the Scheer cult is so devastated they are crawling on all fours and blubbering like babies. They have been bombarding me with vile comments, that only prove my point, and they can't be humiliated enough....

Hi anon...you're welcome. I'm laughing too, and let's face we all deserve it. The Con traitors gave us all a scare, but now we get to kick their remains around and watch them slowly self destruct. Make sure you have enough popcorn...

Hi RT....The division of this country is something the Cons will live to regret, for it will be the final stage of their life cycle. The Cons will eventually have to choose between a Western Yahoo party, and the existing party, and it should split the party and make it impossible for the Cons to win a national election again, it's ironic that Peter MacKay is running for leader, for he was responsible for selling out the Progressive Conservatives, and will now help destroy the Harper Party. Karma doesn't come any better than that...

Hi JD....thanks for that, but you really should be thanking everyone including yourself. We were forced to live through many grim moments in the last year or so, and our collective will to never give up helped progressives get through that ordeal. From now on it should be easier. The Cons have used up most of their ammunition, and will use what's left on themselves in what I hope will be a circular firing squad. While we look on and pour a little gas on the flames of their destruction. Who knew saving your country would be so much fun?

Hi anon....yes, the reaction of the Cons has been both frightening and hugely entertaining. Some are sounding practically suicidal, and I'm certainly not going to discourage them. They may not recognize it yet, but the demographic situation will slowly crush them, so the sooner they leave the better for us, and them....

Hi anon....I like those lyrics, now can you suggest a musical arrangement ? So we can serenade the Cons as they lie dying. We can't let them suffer too much, it wouldn't be humane. Let them whimper for a while and then let's finish them off ☠

Thank you, Simon, for all your hard work. Please keep it up. All the best!