Election 2019 and the Malignant Influence of Parson Manning 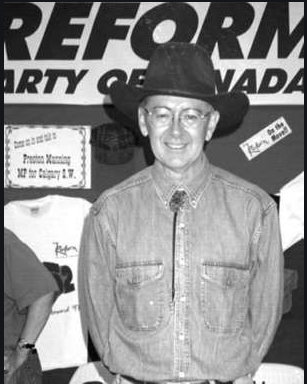 It's been almost thirty years since Preston Manning and his Reform Party cowboys galloped into Ottawa and started trampling on our country and its values.

They had "The West Wants In" tattooed on their...er...saddles, as they stampeded into our parliament.

Parson Manning thundered that they had come to elevate our politics, take big money out them, and make them more God-like. Hallelujah!!! 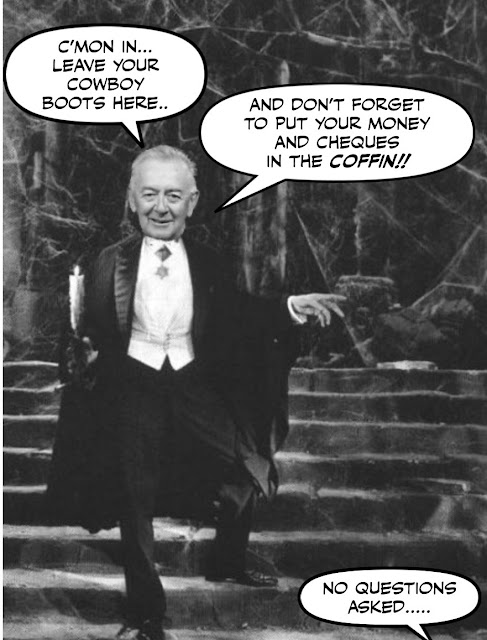 For this is how low Parson Manning has fallen.

The Manning Centre put out a fundraising call for election advertising and then passed that money along to a series of third-party political groups that have been running attack ads against the federal Liberals, the organization said.

But the source of the Manning Centre’s donations to those groups, worth more than $300,000, will remain hidden from public view since the Calgary-based conservative think tank, which has not registered as a third party with Elections Canada, does not intend to disclose them.

He won't tell us the names of the big money bagmen who paid for disgusting ads like this one. 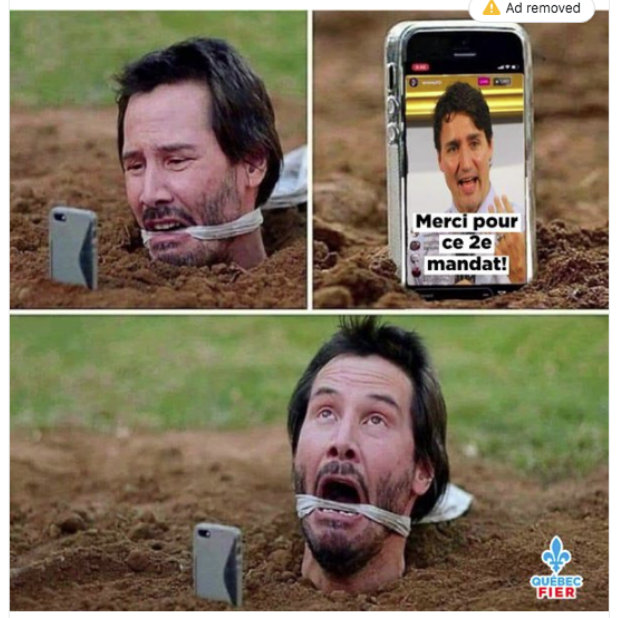 An anti-Liberal election ad paid for by the Manning Centre has been taken down by Facebook for excessively violent content.

The ad, one of a number of intense ads the Manning Centre is funding through third-party groups it supports, shows actor Keanu Reeves buried up to his neck in the dirt, looking at a mobile phone showing Justin Trudeau, saying, in French: “Thank you for the second mandate.”

But he has dismounted from his high horse, and is now crawling on all fours through the gutter.

Many of the ads are intense, accusing Justin Trudeau of being a groper, a racist and a hypocrite.

And Justin Trudeau is right to accuse the Cons of running one of the dirtiest campaigns in Canadian history.

Liberal Leader Justin Trudeau today acknowledged the Conservatives could win Monday's election — and accused the party of winning support by running one of the "dirtiest, nastiest" election campaigns in Canadian history.

"We know that the Conservative Party is running one of the dirtiest, nastiest campaigns based on disinformation that we've ever seen in this country," he said. "And it's no surprise that they don't want to share whose deep pockets are funding their attacks on Canadians, on other parties and on the most important fight of our generation, the fight against climate change."

Parson Manning must be so proud of himself. No wonder he puts "PROUD" on all those oily third party advocacy groups.

Even if his growing right-wing extremism, makes his hallowed Manning Centre look more American than Canadian.

I've served my country in uniform, in Parliament and in Space. I'm shaking my head watching this. Watch @andrewscheer sit through O Canada 🇨🇦 while MPs from all parties sing it in celebration. pic.twitter.com/qAaInmQpLA
— Marc Garneau (@MarcGarneau) October 16, 2019


As I said on Twitter, when I first saw Andrew Scheer refusing to rise for O Canada I thought he was just striking another cheap blow against women's equality, to please his bigot women-hating base.

But now that I know he's an ugly American, I can better understand why he refused to rise, and showed so little respect for our anthem and our country.

And no wonder the country's biggest newspaper says Justin Trudeau's Liberals are the best choice for Canada. 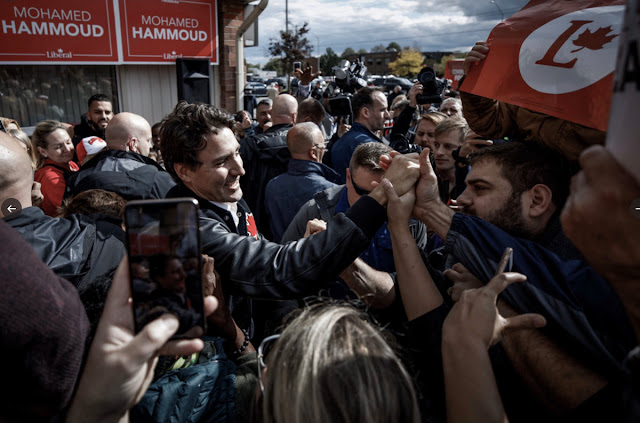 Four years ago, almost to the day, we enthusiastically urged voters to back Justin Trudeau and the Liberals. It was high time, we said, to choose a “strong, hopeful alternative” after almost 10 years of regressive Conservative rule. It was an easy choice.

Today, we make the same recommendation for Monday’s election. Trudeau and the Liberals have accomplished important things since 2015. And they offer the best program for continuing in that positive direction over the next four years.

He may be flawed, like all of us, but he is never cruel like Scheer and his Cons, or as hypocritical as Parson Manning.

He's leading us in the right direction.

And decency should count for something...

I hope Trudeau pushes for an investigation whatever the outcome might be. Now that he's got Obama on his side, maybe he can get some traction on digging into these dark-money groups. He's a fighter if there ever was one, but when you're playing by Queensberry rules and your opponent brings a nuclear arsenal to a knife fight, the match is rigged for sure! Help us Obama-wan Kenobi, you're our only hope!

amen, do we want Singapore or Sarajevo

"I hope Trudeau pushes for an investigation whatever the outcome might be."
Sadly, he wont, Jackie. Investigations and inquiries are exclusive to the Cons as the past has proven. What better way than having taxpayers pay for useless inquiries and using them as tools to help elect them in the next election. It never ends with the Cons. They're always in election mode and we the taxpaying suckers paying for it makes them absolutely giddy. Party before country, just like their inbred GOP cousins.
JD

Tor Star endorsed the Liberals?! Wow, what a surprise! Next you'll be telling us that the G&M and Pissedmedia endorsed the Cons!

The Con fake news manufacturers will be going all out this week and the cowards hiding behind Prestone's institution for swollen amygdala glands is just one of the many shadowy Con "money bags" feeding these "proud" and "strong" entities belching out their propaganda. It's disgusting that they've stolen the proud and strong keywords that actually once meant something but now is mostly a front for white supremacists. Another example of whatever the Cons touch, it turns to shit.
Stealing, lying, cheating and hating. The fab four traits of Scheer's party. Its modus operandi. Its heart and soul.
JD

So did Barack Obama, Raptors GM Masai Ujiri, and Ryan Reynolds, who are all personal friends of Justin Trudeau. But just like when popular public figures here endorse Democrats, while D-list has-beens like Scott Baio and Kid Rock endorse Republicans (and in particular, their reality-TV cult leader), that only gives more red meat to the frothing Con base (and Dipper populists who are no better) fuming about "Liberal elites" and fomenting conspiracy theories about Epstein Island. Scheer might have gotten a nod from Wayne Gretzky, but he endorsed Harper before that, and like Theo Fleury, keeps proving that he's taken too many pucks to the head. (As a related aside, I no longer root for the New England Patriots.)

More and more I keep saying the Internet was a mistake. #1 tool fueling the rise of irrational, populist rhetoric. For example, this thread. Aaron Wherry shares his piece on Obama and Trudeau.

Con extremist: "There are outside forces at work globally and they're up to no good. The George Soros rainbow protests he funds cause chaos and poverty. Everywhere he goes there is trouble. He is deeply involved with Obama and Trudeau."

The Dipper extremists at least use slightly more coherent verbiage in their claptrap. But funny how in both cases they reference "international cosmopolitans" like... George Soros. But our Dipper troll from yesterday would have you believe there's no anti-Semitism on the left. Sure, Jan...

The Reformacons are a western separatist party with a twist. Rather than leave Canada they expect any province that does not conform to their vision to leave. The details of their vision is somewhat murky but essentially it is a decentralized power structure with equal provincial voting power regardless of population size. A free trade and monetary union with human rights and social programs determined at the provincial level. Sort of a European Union minus the human element and other standards such as environmental, immigration etc. Attached is a link to the Reform vision and although Scheer has never explicitly stated its his vision as well he has certainly expressed support for its parts in numerous interviews starting with Faith Goldy and how the supreme court could be circumvented and more recently his promise to bang out a interprovincial trade deal within the first 100 days in office. The start of bye bye Canada as we know it and the liberal influence of that pesky province. https://en.wikipedia.org/wiki/Reform_Party_of_Canada#Social_policy

Hi Jackie....I agree with JD, progressives are too soft, or too Canadian when it comes to dealing with the Cons. I have yet to see a single attack ad that is half as vicious as the foul ads the Cons are always firing at the Liberals. I suspect that Justin told party organizers he didn't want to play the dirty Con game. It reflects well on him, but I fear it could cost him the election..l

Hi anon @10:34 PM...The Toronto Star is not the lefty liberal newspaper it once was. It has gone quite a bit to the right. So an endorsement is welcome and a bit of a pleasant surprise...

Hi JD....Yes the Cons are on a fake news rampage, with their Big Lie that the Liberals want to hike house taxes by 50 % being spread all over the place. I have seen some Liberal Internet ads trying to correct that fake news, but none of them ever accuse the Cons of lying like thieves. So the Cons have been able to get away with murder, and I fear it will not end well..l

Hi RT....I very much fear for the future of this country. As Jacques Parizeau realized on a train journey from Ottawa to Banff, it's really big, and he believed it could only be held together by a very strong federal government, which why he became a separatist. But now thanks to Alberta we have another kind of separatism fuelled by the slow collapse of the oil industry, and for which I see no solution...