How Trump Turned The White House Into a Madhouse 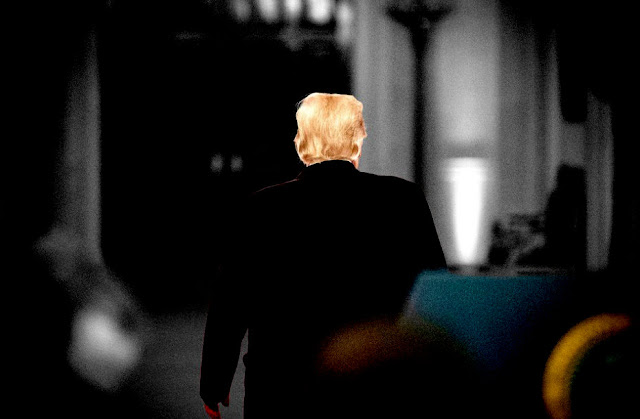 Donald Trump has been holed up in the White House for days, in cold grey Washington, when he'd much rather be in sunny Florida playing golf.

He's still clinging feverishly to the hope that by shutting down the U.S. government he can force the Democrats to give him billions to build the Great Wall of Trump.

But he's getting nowhere, he's running out of time, the Democrats take over half of the Congress tomorrow. And as this tweet makes only too clear: 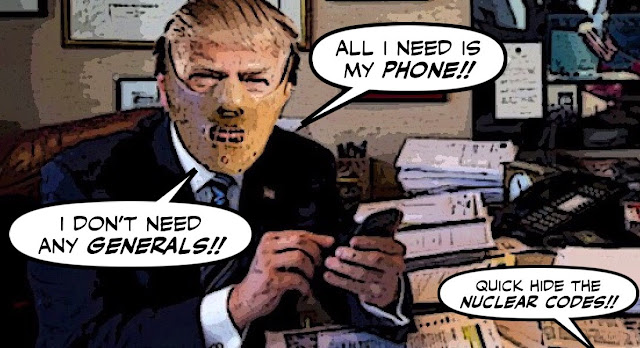 And anyone who still thinks that's a "president" must also be losing their marbles.

But then why should anyone be surprised at the logical outcome of this horror story?

When as Richard Cohen argues very persuasively, the morally depraved orange beast  has turned the White House into a madhouse.

I drove past the White House the other day. It had been a while, and the place seemed smaller, somewhat tawdry, almost haunted. I imagined bats winging in and out, spider webs in the corners, and the president upstairs in the family quarters, talking back to the TV...

The car slowed. I thought I heard a wail from the upper floor: President Trump going mad. Or maybe I am. I would not be surprised. Trump has that effect on people.

For it has been that bad... 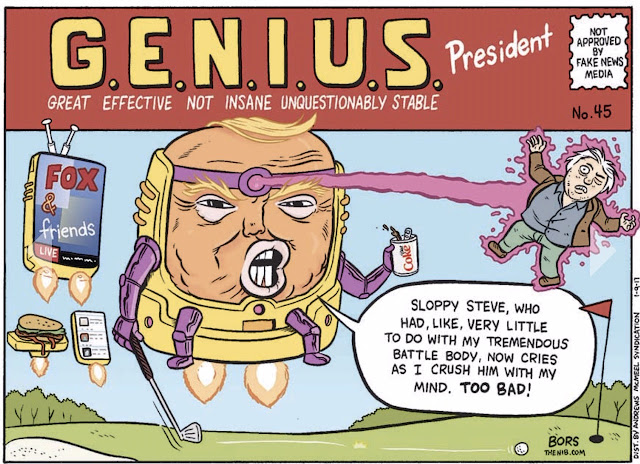 And while his rabid base may never abandon him... 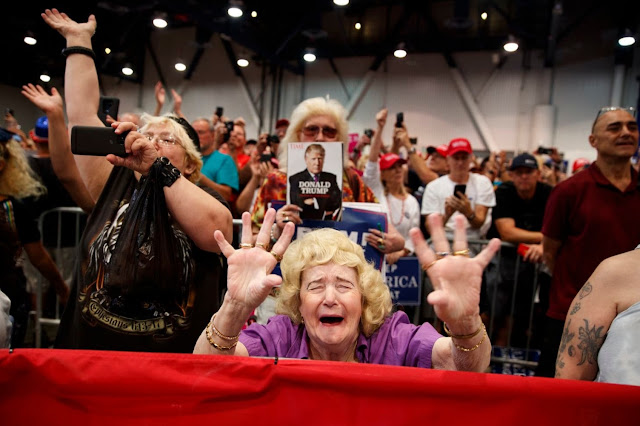 Who can blame most sane Americans for feeling like Cohen does?

It’s hard to believe we’re into another year and he’s still the president of the United States. The shock of it has not worn off. He has never achieved normalcy. Often, when I see him on TV, I react with a kind of nausea: Him! How? I know, the electoral college. I know, a slice of three states. Yes, yes, but how did we elect such a dummy, such a liar, such a baby, such a fool, such a dirty man?

The damage Trump has done to his country is incalculable.

Trump has soiled America. He has not made it greater but, in a word, whose need is now apparent, worser. The America that previous presidents boasted about — Ronald Reagan’s “shining city on a hill” — is now a slum among nations.


As I pass the White House, it looks sad, the home of a hoarder — lies and scandals and crimes spilling out of the closets and Trump tweeting some inanity. It’s a madhouse that I’ve conjured. It’s a madman we’ve elected.

But at least now there are no more illusions... 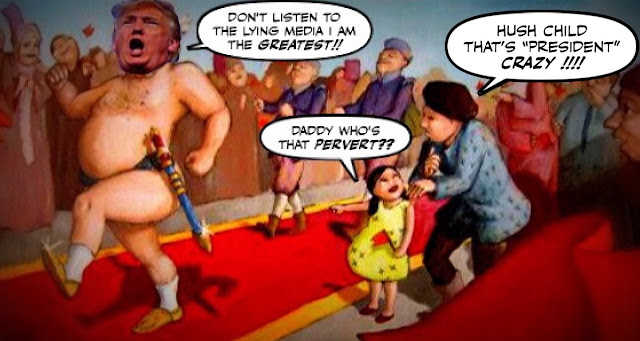 And as Robert Mueller prepares to make our horror story Trump's nightmare... 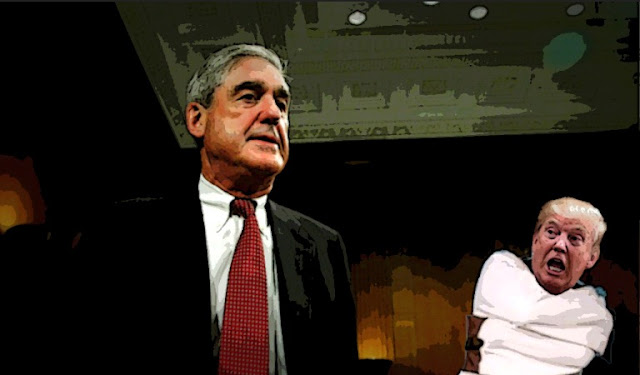 I'm not surprised that even some Republican commentators are predicting catastrophe.

Donald J. Trump’s presidency will not survive 2019; The downward trajectory of every aspect of his tenure indicates we are headed for a spectacular political crash-and-burn — and fairly soon; His increasingly erratic and angry behavior, his self-imposed isolation, his inability and refusal to listen to smart advisers that he hired, all are leading him to a precipice;

And I'm prepared to make some predictions of my own:

And I suppose it's possible we may not survive it.

But the story of the madman in the White House may yet have a happy ending... 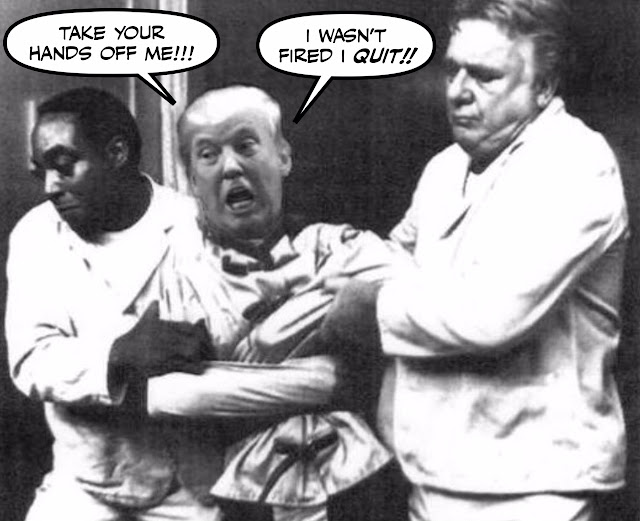 He's turning the rest of the world into a madhouse too. A caravan of homegrown vandals are sacking Europe, and now Brazil Nut Bolsonaro is about to literally set his own place on fire. As if that weren't bad enough, I never thought I'd see Canadians behaving so "impolitely" towards a PM who makes a concerted effort to accommodate them, and who, unlike his chief opponents, doesn't appear to have a nasty bone in his body. Granted the simmering resentment was already there, whether towards Muslims or immigrants or feminists or the LGBTQ+ community or the "Western alienation" phenomenon in Canada that seems to just be a rabid Pavlovian response to the name Trudeau. But Trump has exploded a powder keg, or rather a series of firecrackers that have gone off in a chain reaction around the world. I'll be very surprised if the last year of the second decade of the 21st century doesn't go out with a bang.

The one good Trump has done, is that we will see him in every so called leader, and we will not see him in true leaders.

"Donald J. Trump’s presidency will not survive 2019." Indeed.
Once congress gets their hands on his tax and banking records and of course, what I expect to be a damning Mueller report, Trump's abomination as president will end.
Between his stint as president and the Trump organization, I expect he and his family will slowly be destroyed by a tsunami of indictments and ultimately, convictions for their dirty deeds.
Enjoy the ride, Mr. President.
JD

HI anon...Richard Cohen is indeed a good writer, but this article is hardly fiction. It's fact based and reflects the feelings of most decent people. Which btw you are not. Did you think I didn't know that the three brackets on each side of Cohen's name are the marks of anti-Semites.? You people are disgusting and we are going to do to you and your scummy gang what we did to the Nazis...

Hi Jackie...yes the fascist disease is spreading like syphilis all over the world, and Bolsonaro is just the latest example. And as you point out, that disease is also infecting Canada. Bigotry is bubbling up like pus and it's slowly poisoning this country. Trudeau is reviled because he stands for our Canadian values, but those values will prevail, and the fascists will eventually be defeated. We are lucky to be alive at such a critical point in human history, take part in such a decisive battle, and what a victory party we are going to have. I can hardly wait...

Hi Steve....I hope you're right, decency is the difference between civilization and barbarism. If barbarism should prevail then the world will burn and/or drown in a sea of blood...

Hi JD....Trump is looking so bad these days if I was his doctor I would be deeply concerned. My prognosis is that he is now a candidate for a heart attack or a stroke. And between the headaches the Democrats are about to hand him, and the looming menace of Mueller, I consider it very likely that he will at some point declare "victory" and quit. If he doesn't he will have to be cut out like a nasty tumour, hopefully with a blunt scalpel...😼

Trump turned the W.H. into a mad house the day he moved in. Since then it all been variations of the theme. Americans brought this on themselves as did the Republicans. A good start has been made by voting into office a Democratic majority in the House, but Americans weren't smart enough to do so for the Senate, so they are stuck with the mad man. As the economy starts its slide, things are not going to get better.

The lack of funds to run the government will not end well for Americans. Many of those who continue to be forced to work without pay, and we thought slavery was over, will be quitting their jobs to work else where, so they can purchase groceries. As one Union Representative pointed out, workers now have to decide whether they will put gas in their car to go to work without pay or pay for their kids school lunch. How focused on their work will air traffic controllers be if they're worried about paying their bills and feeding their kids,. If they have to take second jobs to pay for food, how alert will they be on the job?
the wealthiest country in the world doesn't have enough money to pay its workers. sounds like a third rate dictatorship with a mad man in charge. Even dictators know you pay those close to you, so they won't revolt.

What may finish off dtrump, is Nancy Pelosi. She is the mother of 5, grandmother of 9. what she knows a lot about, besides running government, is how to deal with a 2 year OLD HAVING a temper tantrum. This will not end well little Donnie. Holding his breath to get his new toy, isn't going to work. This evening's news is already reporting Republicans are starting to vote with Democrats. Old mitch may find he is out also. Those politicians don't want to loose their jobs and they may see that could happen if this weirdness doesn't end.

As to dtrump being impeached. Don't seeing it happen because the Republicans have the majority in the Senate. the Democrats in the house are far better off to pass as much legislation as possible. If the Senate and trump refuse to pass it, then they will hve a very good cause when they run again in 2020. To spend 2 years trying to get rid of trump will simply not impress those who need health care and better education for their kids.