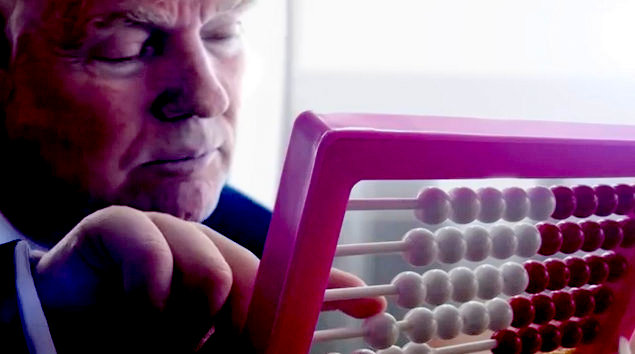 Donald Trump likes to say that he's really good at numbers. You know, the best.

Just like he says he knows more about science than the scientists.

But whatever he says about Global WAMING, after the long government shutdown, more and more Americans now believe he either doesn't know what he's saying or doing. 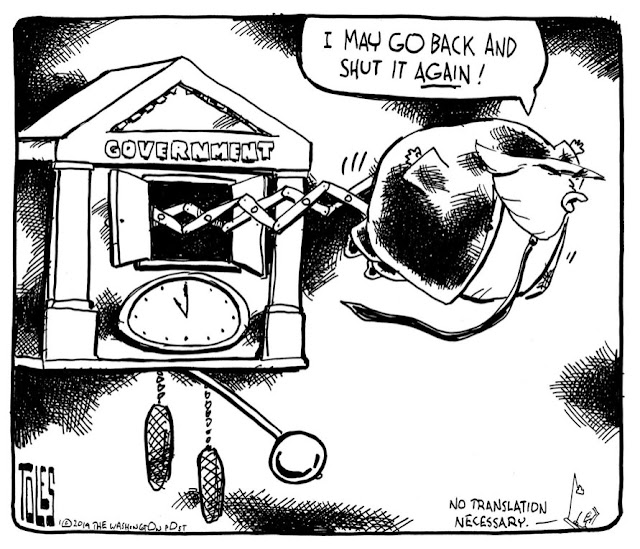 But then who can blame the Orange Oaf?

He was supposed to have spent the month playing golf at Mar-A-Lago in sunny Florida.

Instead he has been cooped up in the White House, in the middle of a freezing winter, slowly losing his mind along with all the others.

During most of the shutdown, Trump remained singularly focused on the wall, declining to travel much and declaring at regular intervals that he was alone in the White House, waiting to negotiate. The shutdown made for the longest stretch of Trump's presidency that he did not play golf. What was supposed to be a three-week stay at his South Florida estate turned into an extended cloistering at the White House.

Over the December holidays and into January, he remained in the executive mansion alone while first lady Melania Trump escaped to Florida. He recalled peering out his window in a moment of loneliness to watch "machine gunners" pace around the White House grounds.

And as for Mr Number's numbers, they're heading for The Abyss. 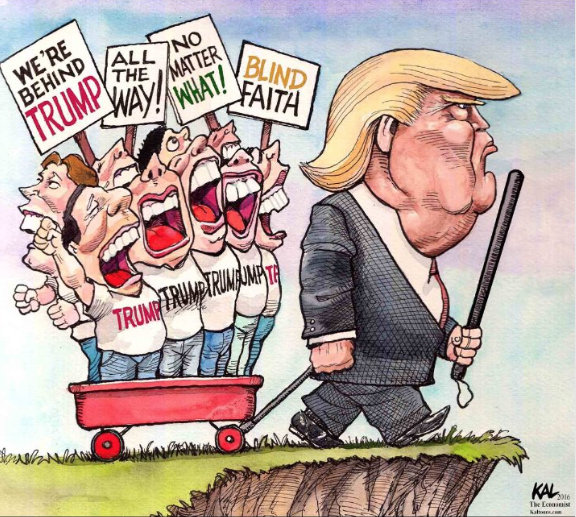 Just about every public poll taken since the shutdown shows President Trump’s approval rate dropping. These surveys tell us a strong majority primarily blames him. The latest Post-ABC News poll drills down to ask what voters don’t like about him. The answer is: practically everything.

More Americans than ever don't like the way he's running the country, or NOT running it.

And to make matters worse they don't like him either.

More interesting perhaps for a president whose party proclaimed itself uninterested in character are the putrid ratings he gets on personal qualities. Sixty percent of registered voters view him negatively as a person, as do 63 percent of independents and 66 percent of women.

After two years of his presidency, 58 percent of registered voters (including 67 percent of independents and women) don’t think he has the temperament to be president.

And we can thank his obsession with that wall for helping to bring him down to earth.

As I predicted long before he became President, it would be his downfall.

And sure enough it has... 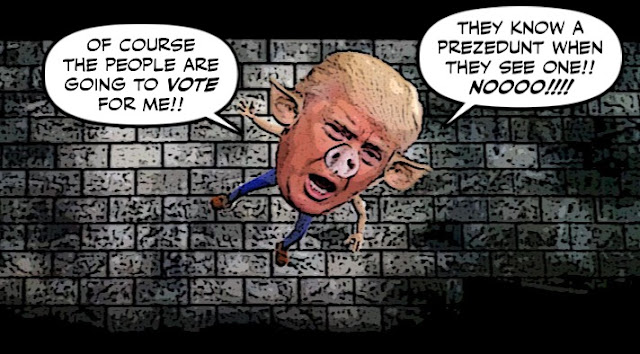 .. some people choose a 'hill to die on'
perhaps Trump has found a 'wall to die on'
FYI - I found Ann Coulter's line amusing..
'I found his puffery charming..'

Trump, like most US presidents is just a sideshow to the real action that is going on with the American Empire.
If they really cared about the "people of the United States", the longest government shutdown in US history would not have happened.
The border wall is smokescreen.
The real news is Venezuela, with the largest oil reserves in the world, pricing their oil in currency other than US greenbacks!
Remember what happened to Iraq and Libya for having the temerity to do that!
Canada stayed out of Iraq except for, I suspect, some Special Forces whose sniping skills are appreciated in US military circles.
With Libya, where major war crimes were committed, the worst migrant crisis since WW2 created and Canada having to go "Peacekeeping" in the aftermath caused chaos in West Africa,
the Nato "operation" was led by Canadian General Bouchard!
Now with Venezuela, Canada is leading the charge for "regime change", hoping to curry favour with the US to get more favourable trade terms.
The US already has the third largest "ethical" oil reserves (Canada's) at bargain basement prices...in fact we are giving it away, no choice in the matter!
Firing John McCallum showed the exit door to that last vestige of Canadian Liberal backbone that stood up to our US elephant neighbour.
We are a completely vassal state now, leadind the LIMA GROUP of vassal states into a war in South America.
Perhaps Mr Trump's wall will come in handy after all.

Trump better not try and start a last-ditch wag-the-dog catastrophe in South America or Iran, or find a random spot in Africa and bomb "Nambia." When he finally is gone, though, I hope he takes the Brexshitters and your Rebel scum with him. By the way, we know Justin has ink, but does anybody happen to know if Weak Andy decided to emulate Roger Stone and "toughen his image" over the holidays by getting a tattoo of Harper on his... convoy bumper? 'Cause I'm pretty sure that if Max decided to get a likeness of his hero imprinted anywhere on his flesh, he'd pick the #1 person he admires most: himself.

Climate Change deniers like to have it both ways. Its not climate its weather, but when it weather that advances their idiotic argument its fact.

Read Re venous with Rama, Arthur C Clark who invented the satellite explains it far better than anyone else.

It's funny we don't hear anything from the self-described "expert on everything" when we're being roasted with a humidex in the high 40s, freak rain storms, F3 tornadoes in Ottawa in late September, the B.C. and California wildfires which are now not an if, but a when. Yeah, nothing to see here eh Donnie? Just ask the coastal states if they believe in climate change after the last 20 years of increasingly powerful and destructive hurricanes. Their losses are in the billions but don't worry, Donnie sends his thoughts and prayers and if you're really lucky, a tossed roll of paper towel to help dry your tears.
Trump will continue to tweet out his inanity about global waming and his base of boneheads will take it as gospel, instilling it in their children who will grow up with the dangerously irresponsible world view of the unstable idiot, Trump.
Trump will eventually lose the presidency but the damage he's done will be his legacy for at least a generation, maybe more. The GOP that enabled him is equally responsible for allowing this clown circus to continue and I hope they are decimated at the polls in 2020.
JD

Trump uses lies to manipulate people. He believes that after a day or so people don't remember the details of the lie and just the feeling remains... climate change is a hoax, immigrants bad, walls good. The Mueller indictments show that he has surrounded himself with serial liars. Some lie to cover up crimes while other perjure themselves just because they can't seem to help it. Its interesting that neither Junior or the son in law have not been charged with lying as they are part of the liars club. Possibly its a bridge too far and public sentiment would work in Trumps favor but for a self proclaimed genius he sure increased his liability by bringing them onboard. Even Putin is smarter than that, political criminals need an exit strategy unless they plan on creating a dictatorship.
RT

Hi salamander...I hope that Trump's obsession with that wall will be what finally convinced most Americans that he was, is, and will always be unfit to be president. I too am enjoying the way Ann Coulter has turned on Trump They belong in the same padded cell, but let's hope Coulter leads the MAGA crowd to the hell where they belong...

Hi hinofan...I am following the Venezuela story and I must admit I am concerned that Canada is getting involved in a situation it knows nothing about. It's motives may be good but it's out of its depth. Venezuelans should be left to sort out their own problems. And Canada should be working for a peaceful resolution, and sending food and medical supplies to help the suffering,..

Hi Jackie...I'm sure Trump would just love to invade Venezuela to try to distract people from all his problems. But it would be absolute disaster. Latin Americans do not support American intervention and forced regime change, no matter how corrupt or incompetent the government. But as for the tattoos on Scheer's buttocks I'm hedging my bet. I figure he has Harper on one buttock, and Jebesus on the other....😳

Hi Steve...I pride myself on being able to remain cool faced with just about any kind of idiocy. But considering where we are on planet earth, I must admit that climate change deniers are the exception. Their stupidity is so great it burns, and I will not let them get away with it. It's the Con's greatest weakness and we must use it to destroy them...

Hi JD...I feel like you, but I console myself with thought that while climate change is slowly killing the planet, it's killing the Cons faster. They are saddled with a position that can only become weaker as the devastating effects of climate change become more and more obvious. It seems Mother Earth had a plan, and she's on our side....🌝🌻🌻

Hi RT...I'm a big fan of Batman so I've seen some freaky villains. But I must say the Trump gang is the weirdest group of con men and sleazy operatives the world has ever seen. And as for Trump, he makes my favourite villain The Penguin look positively normal. I'm going to need a long period of normality and decency to recover from this nightmare...🤕