The Wonderful Humbling of Donald Trump 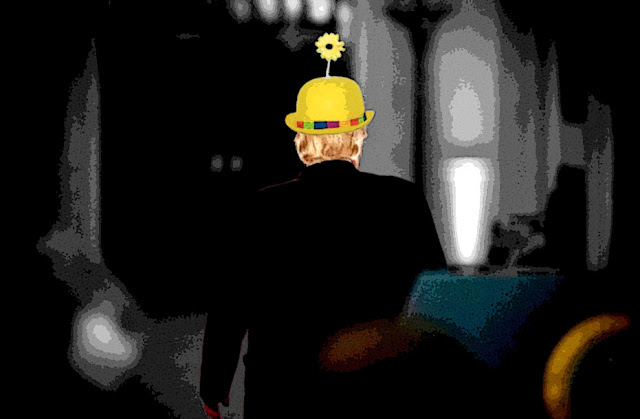 The U.S. government shutdown has now being going on for more than a month, with no end in sight.

Almost a million government workers are struggling to make ends meet, with some forced to resort to food banks to feed their families.

The U.S. credit rating is threatened, and planes are threatening to fall out of the sky.

But Donald Trump is still bellowing " build my wall !!!"

And apparently, bellowing something else as well. 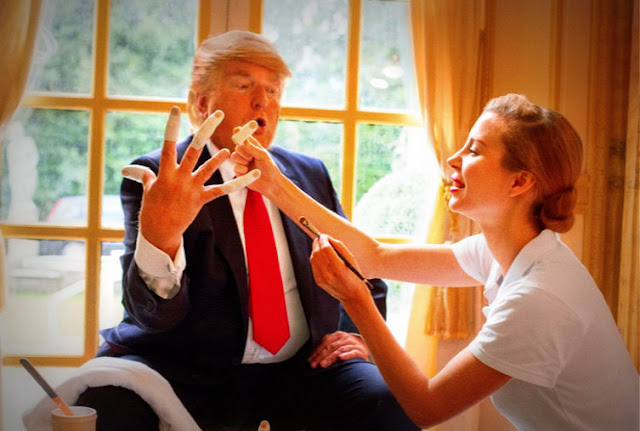 The tech website Gizmodo reported this week that it found at least three retouched photographs on Trump’s social media pages since October, including two in the past few days, in which his body and face have been slimmed, his face and neck wrinkles tightened, his hair cleaned up — “and in one of the strangest alterations, Trump’s fingers have been made slightly longer.”

Which shouldn't be surprising, considering how Trump has always been obsessed about them.

Trump’s reputedly stumpy hands have long been of concern to their owner, at least since the editor Graydon Carter called him a “short-fingered vulgarian” in 1988. After being teased by Marco Rubio, who posited that small hands correspond to another small body part, Trump declared at a presidential debate: “He referred to my hands: If they’re small, something else must be small. I guarantee you there’s no problem.”

Although he probably should be more concerned about the way his nose is growing, with every lie he tells.

Glenn Kessler’s Post fact-checking team this week reported that the president’s production of false or misleading claims has nearly tripled, to a rate of 16.5 per day in his second year from 5.9 during his first year. The 82 days on which Trump did not publicly declare a falsehood “were often days when the president golfed.”

His approval numbers are shrinking.

Nearly 6-in-10 voters — 57 percent — disapprove of Trump's job performance, compared to the 40 percent that approve. In addition, 54 percent of voters blame Trump and Republicans on Capitol Hill for the government shutdown. Only 35 percent blame congressional Democrats.

And a man with such small hands, such a pointy nose, and such a huge ego, is no match for Nancy Pelosi. 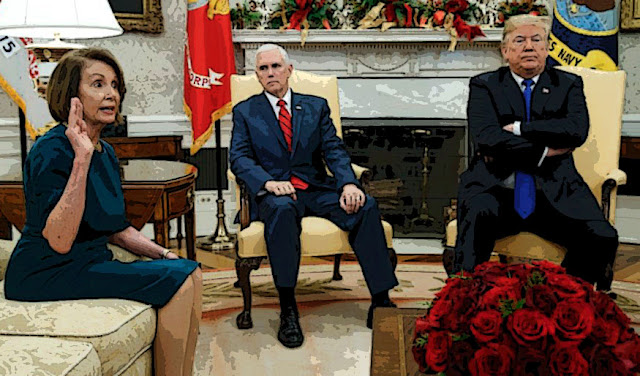 President Trump is no stranger to bluffing, but rarely has he had his bluff called so hard and fast as he did by House Speaker Nancy Pelosi (D-Calif.) on Wednesday.

Trump sent a letter early in the afternoon declaring he would show up to deliver his State of the Union address in the House chamber next week, regardless of Pelosi’s shutdown-related objections.

It was unambiguous: Trump said he was coming, and he was challenging Pelosi to stop him.

But she stood firm, and cut Trump down to size. 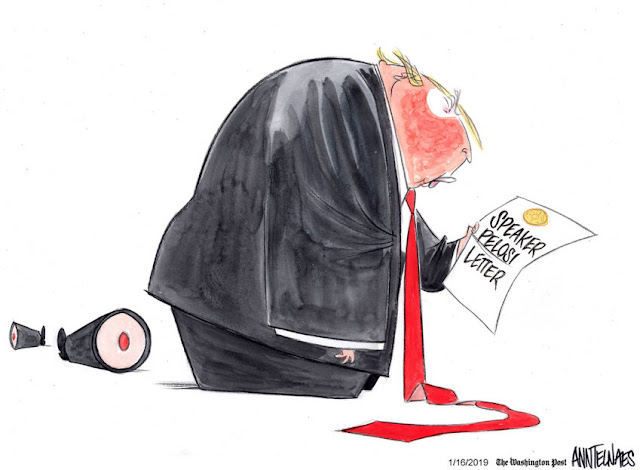 Shortly after that, Trump conceded the whole charade, saying he would use an “alternative" method of delivering his address and that it wouldn’t be in the Capitol. Basically: He admitted he wasn’t going to follow through on the threat he’d made just a couple hours earlier.

Leaving Trump looking like a maniac or a loser... 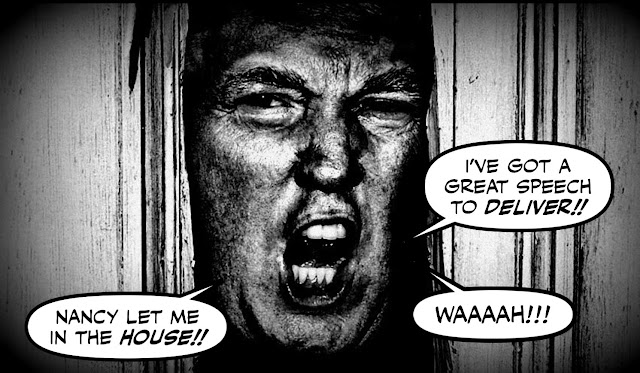 Which makes me wonder, how much humiliation can Trump take before he implodes?

And isn't it nice to know it's just the beginning?

There's also the growing possibility of a general strike on the horizon. Trump's desperation and the Republicans' willful looting of the commons is going to lead to nationwide civil unrest. All according to Putin's plan, of course, which includes Mitch McTurtle the traitor hiding in his shell and refusing to allow a re-opening of the government. But there's only so much circus the people will tolerate until they run out of bread.

I hope Trump and the GOP go down in flames, and peacefully with minimal (ideally no) bloodshed. This has all the makings of a stealth coup. I guess terminal-stage Rome wasn't pretty either but the tiny flicker of optimism in me wants to believe that something better will emerge from the ashes. The emperor is a vandal and he needs to be sacked.

loved the picture of him cut off at the knees, but the more appropriate picture might be one which was referred to by her daughter, Nancy Pelosi can cut your head off and you won't even know you're bleeding.

Watched Lawrence O'Donnell this evening on MSNBC. That man was having way too much fun, not really, no one can have too much fun at dtrump's expense. O'Donnell was referring to dtrump's latest comments regarding Pelosi's ruling that there will be no State of the Union address by dtrump in the House of representatives. It shows dtrump sitting behind his desk in the Oval office, saying, Nancy is being reasonable. O.K. It looks like she has this down pat.

Today the Democratic bill had 6 Republicans vote with the democrats in the senate, including the usual 3 and Romney and the Senator from New Orleans. They're starting to crap themselves because the Super Bowl is coming up. Not enough screeners or controllers, there will be a problem. As some air line personal were voicing concern regarding safety in the sky, we had others saying as many as 20% of air traffic controllers can now retire. They aren't training new ones while this shut down is on. They expect this will all result in fewer flights as time passes and have an negative economic impact on the U.S.A.

At this rate China won't have to worry about tariffs on their goods going into the U.S.A., those goods just won't be going because they won't be needed. A country flat on their economic ass doesn't buy. Nice work by dtrump, destroying the American economy. Wonder how much Putin is paying him for this work? if he's doing it for free it would be a first because Donnie doesn't do anything which he won't be paid for one way or another.

This morning, Vancouver Island, B.C. time, was watching Marco Rubio. Now that man has a sense of humour whether he knows it or not. His comments regarding the U.S.A. recognizing the new President of Venezula was hysterical. He said, because the "declared new" PRESIDENT, was the former Speaker of the Venezulan House of Rep he is legally the president because they voted for him, the citizens are protesting in the streets and the other president was elected illegally. Then it came to me, if there were mass demonstrations in the streets of the U.S.A. over the shut down and the House of Representatives voted Speaker Pelosi to be President what would Rubio say about that, because many of us are of the opinion dtrump wasn't legally elected either.

dtrump would really, really like to invade Venezula so people would forget about the shut down and he could seize control of the oil industry for his friends at the various oil companies. OF COURSE there would be the no small problem of Iran, North Korean, Russia, and China not permitting that. Putin may permit Donnie to talk about it to distract Americans from what is going on, but he will never permit Donnie to have the American military invade anything which isn't in his interest. China has too many interests now in South America to permit the Americans to continue as they once did in South America.

This shut down is helping all of this along. How is American intelligence forces keeping up with what is going on in Venezula?

This weekend, if the shut down it going on, it wouldn't be hard to have a couple of million americans in the streets, just like in Venezula. There are 800K people not being paid, who work for the government, then there all those who are working for contractors who aren't being paid, then there are all the companies who rely on federal government workers to run their companies. Its not like a federal government worker is going to purchase anything but the very basics at this time. social services are not going to be able to keep up with the on slaught of those requiring services. Yes we might see a few marches with a few million and it might prompt Congress to vote to remove dtrump and pence to save their country.

I understand Pelosi would become the President and then the House of Representatives would vote on a new Speaker who would then become the new V.P., is that how it works. Gee, that could be fun. who in the house of rep. would make a good v.p. for Pelosi until 2020. The AOC group looks like they're fun..........I know you have to be 40 to be Pres. but is there an age limit on V.P?

Did Michael Moore suggest on the Colbert show last night that Trump may figure he can use this shutdown, and others if necessary, to stall and attempt to avoid the consequences of current and forthcoming investigations?

"Which makes me wonder, how much humiliation can Trump take before he implodes?"
Great question, Simon. It will be even more humiliating for him now that yet another long time very close pal that worked for his campaign has been indicted. Now that Roger is over and out, what will the Trumpster fire do? Sing his greatest hits? "No collusion", "witch hunt", "it's a disgrace".
I hope and pray this signals the end is near for Mueller's report and its contents spells the end of the most abhorrent president the U.S. has ever seen.
JD