Andrew Scheer and the Cancelled Convoy 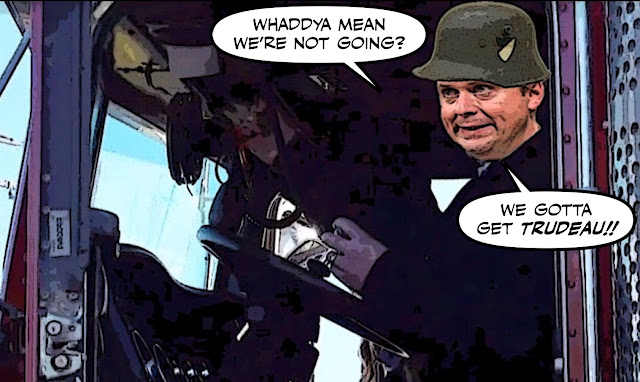 Yesterday I wondered why Andrew Scheer hadn't condemned his yellow vested supporters for calling Justin Trudeau a traitor, and threatening to kill him.

But I forgot how much Scheer hates Trudeau, and how excited he was at the thought of joining a massive truck convoy and driving all the way from Alberta to Ottawa, to let him know how much others hated him.

Because trust me, he was practically giddy with excitement.

So today he must bitterly disappointed.

Because it turns out, the convoy isn't going anywhere.

A coalition of Alberta oil and gas advocacy groups has cancelled a truck convoy to Ottawa it was planning for February due to “unexpected challenges.”

The organizers won't say what those "unexpected challenges" are, so Canadians have been left to guess what they might be.

#Alberta oil and gas group cancels Convey to Ottawa
They just figured out where Ottawa is and they discovered it's not in Sask.https://t.co/NArPGlXBmc pic.twitter.com/bshqGEk2NU
— 🍁 Merlin 🍁 (@MerlinYYC) January 15, 2019


And those "challenges" could be anything.

One group of yellow bellies wants to honk their horns loudly outside Trudeau's house, while another group wants to arrest him for treason, and yet another one wants to hang him.

But my guess is, this is the "unexpected challenge" that caused the convoy to be cancelled:

While the convoy planned by the resource coalition is being cancelled, another pro-oil convoy from Red Deer to Ottawa has been planned in mid-February by another group, associated with Canada’s so-called “yellow vest movement.”

When asked if the yellow vest convoy had anything to do with the decision to cancel the other convoy, Battershill said it wasn’t related to any other people or groups and that he was “not going to comment on any other groups or activities that are going on out there.” 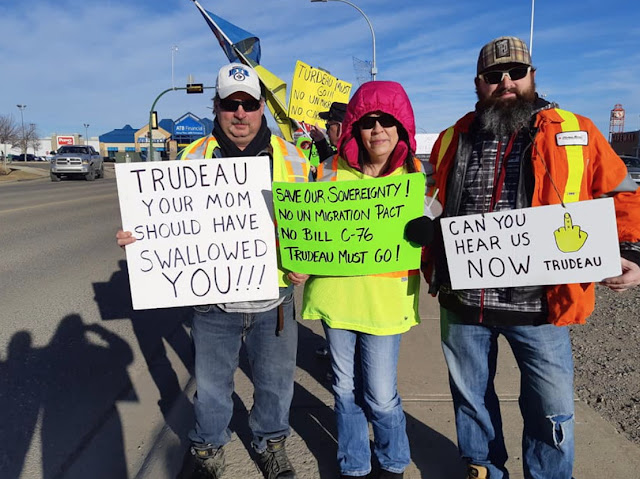 But then they are Andrew Scheer's friends, the toxic Trudeau haters he is refusing to condemn.

So now he's caught between a rock and a hard place.

And will probably have to find some way to join them... 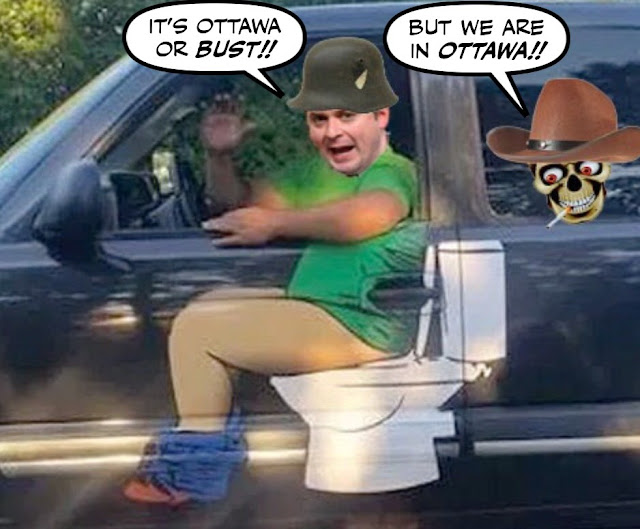 For his rabid base will never forgive him if he doesn't.

While on the other hand, the decent people of Ottawa will probably never forgive him for inflicting this upon them...

2 days before Christmas & we don’t care.

Last weekend there was 50 of us. Today thousands. Over 500 trucks are participating in protests today. Bonnyville, Alberta is shut down.

Do you hear these horns? These are Canadians standing on guard for Canada 🇨🇦 pic.twitter.com/nmjVZhA6Kj
— Chris Minister of Smartarsery (@Lumberist) December 22, 2018


The honking sounds, the oily fumes, the rancid bigotry.

So he really can't win.

And for failing to condemn those who would threaten to kill Justin Trudeau.

He is unfit to be the leader of any Canadian party. 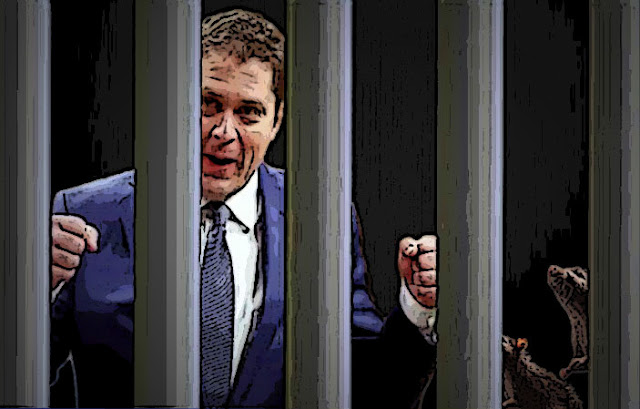 The pictures of Scheer are wonderful. Made me laugh!

so why no convoy. Some one figured out its winter here and Ottawa is a long way off. Its a tough drive through winter weather. Then there is the distance thing, yes, Ottawa is not next door to Alberta and that is why this all makes me continue to suspect there are out side influences at play. Many really don't get the distances involved in this country. We're an enormous country and most of it unsettled. Driving across Canada is driving through a lot of vacant land. its not fun, if its not good weather.

Then there is the cost, given the distance, whomever "organized" this most likely learnt after the fact, it costs a lot of money to travel this distance, not just gas, but hotels and meals. If it started out like just a short trip, and people dropped off because of a lack of money, time, exhaustion the trip would be a failure. That is never good. People who make long distance trips to protest are usually "driven", they believe in it. This "drive" to Ottawa, was a joke by people who have no real idea about Canada. Not to mention some of those racists would be going through First Nations territory and might not be too welcome.

I made this meme of the leader of the mothertruckin' moron brigade, if you want to share with the truth squadrons or post here. Note that Chrystia is wearing the safety vest for its intended purpose, and obviously does not belong to this mouthbreathing gang of Neon Nazis. Also, there are two toddlers in this photo; neither one is named Hadrien Trudeau.

Andy really wants to be Donald Trump. So much so that he's playing pretend and acting just like him. Is he still for Brexshit now that everyone knows it was never cool?

It could be related to inter provincial permitting and insurance. Cons piss and moan about bureaucracy but if it keeps the jack asses out of Ottawa perhaps its not such a bad thing. They could bring posters, organize a march and leave their macho equipment at home. In the future it will all be automated anyway so they might as well start practicing now.
RT

Hi e.a.f...I think the cancellation was probably caused by two things. One, how many days would it take to get there and back, and how many days can truck drivers take off work? And then, as I mentioned in my post, there are the political considerations. What would people in the East think of Scheer and his Cons if they were seen to have invaded their part of the world with a convoy of noisy, trucks spewing filthy fumes, and causing traffic jams everywhere? Answer: not very much. It might have seemed like a good idea in Alberta, but notvanywhere else....

Hi Jackie ...good one. Freeland and Hadrien both look better at the wheel of big vehicles than do Scheer and Trump. As you could see in that video I posted, Scheer was so excited Hadrien looked more like an adult. And by trying to be a wannabe Trump, Scheer also managed to deep six the truck convoy, which would have been too associated with him to win him any support in the East. He's an absolute idiot, and no he hasn't said anything about the Brexit debacle, lest even more Canadians think he's too dumb to govern...

Hi RT...Thanks a lot. Now I have the image of Scheer sitting in a driverless truck, honking the horn as he roars down the highway, and it's not a good one. Whoever thought it would be a good idea to drive a truck convoy into Ottawa and cause gridlock in that city should be committed immediately...