Has The Con Clown Maxime Bernier Gone Off The Deep End? 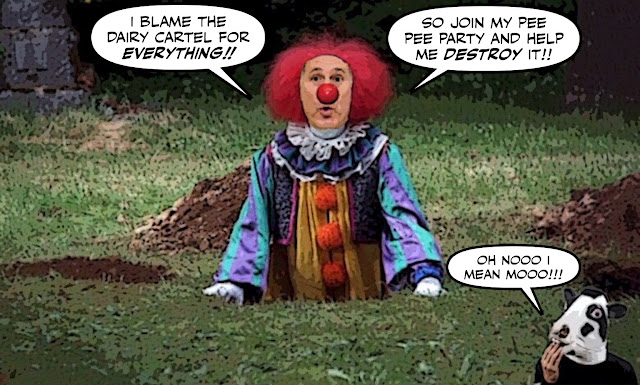 It pains me to say this, but I have to admit I was wrong about Maxime Bernier.

I always knew the man known as the Bobo from the Beauce was a Con clown, obsessed with the dairy cartel.

But I thought he was essentially harmless.

And sadly I was wrong. 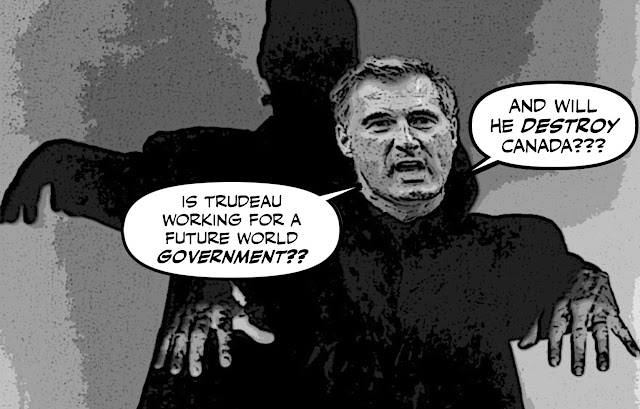 For it seems that the clown has turned into a monster.

Maxime Bernier says the destruction of Canada could be one consequence of a hypothetical “future world government.”

Bernier, leader of the far-right People’s Party of Canada and a sitting member of the Canadian Parliament, issued tweets Monday evening warning that “prominent” Canadians are trying to “set up a world government” run by the United Nations.

For that is crazy stuff, the kind of conspiracy theory you might expect to hear from someone like Alex Jones... 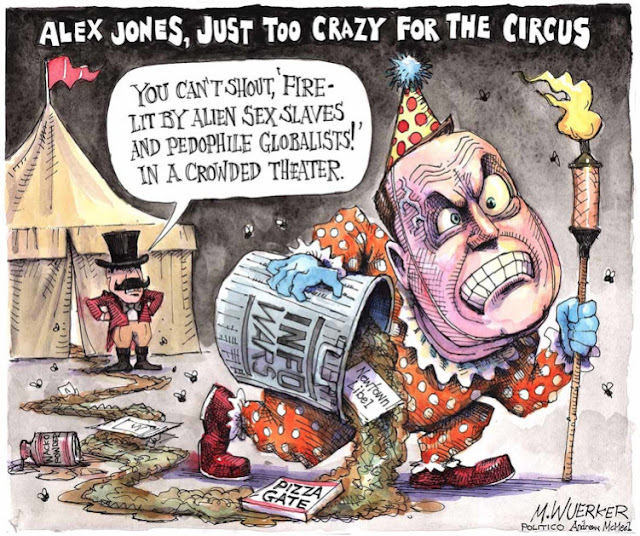 And it only proves what I have been saying about how the Cons are becoming more American than Canadian.

But then Bernier himself has always been a little strange, as this leadership campaign poster made only too clear... 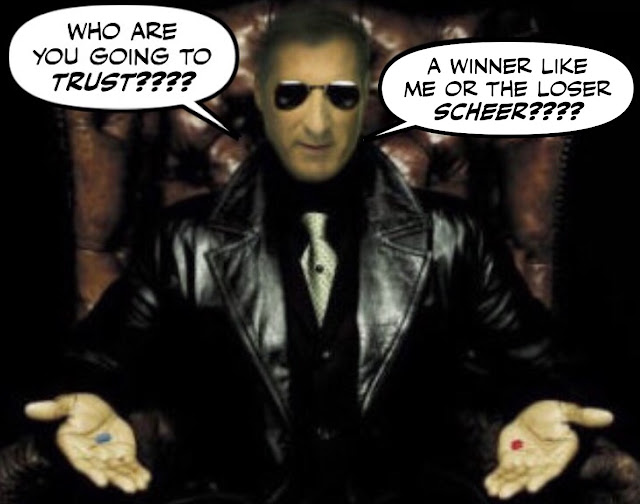 Now he's trying to win over Andrew Scheer's supporters so all that craziness helps.

And so does a little bigotry.

For hurting LGBT people, or Muslims, or the poor, or other marginalized people, gets you tons of Con brownie points.

And of course for the decent people in this country that's the good news.

For the more Scheer and Bernier try to impress each other...

Or destroy each other.

The more the Con vote will be split.

And the greater our victory will be...

I'm sure it's no coincidence at all that Max decides to one-up Andy after the coordinated tinfoil outburst over the UN Migration Compact that collapsed Belgium's government and is being touted as gospel by nationalistic bigots in office the world over. The downside of this is that while Max and Andy's little pissing match shows promise of splitting the vote between mainstream lunatics and fringe lunatics, the election is still nine months away and the more Max and Andy continue chasing each other to see who can jump out the Overton window and off the deep end first, the more their rhetoric radicalizes already unstable people to do awful things. Which is why I'm not 100% convinced this isn't some kind of controlled opposition or staged fight put into place by Harper or one of his chief strategists. Though probably not Tony Baloney as he can't even control his, um, gazebo.

It's just like with the GOP having useful idiots as figureheads. Reagan the dementia patient, George the Lesser playing costume cowboy while PNAC and Darth Cheney made a mess of the Middle East, and now Trump, the sideshow-spectacle emperor on the golden throne who pulls TV ratings stunts and tweets abut WALL while Turtle McConnell, Mike Penance and his Rapture-mad Talibangelicals, the Koch Kleptokrat Klan, and the gremlins at the Kremlin make off like bandits -- with a little light genocide for shits and giggles. There is no distinction between the Republicans and the Cons or any of their offshoots. They're just a shell company (turtle shell?) with their naughty Yankee bits covered over by a maple leaf.

Trudeau is 100% correct that this will be Canada's nastiest election in a long time, perhaps ever. But it's also bound to be the most sensationalistic and surreal. No one really knows what kind of results Max's "Canadian Kipper" splinter cult will prove to have. The important thing for decent Canadians is to ensure to keep their eyes on the prize, renew Trudeaumania! 2.0 for a second season, and stave off the Cons and the Pee Pee party and scrub Parliament of any leftover Harperstank for years to come. Let the Rebel scum stormtroopers wither in the dark.

I’m so torn by this situation. I am horrified by the way Mad Max is turning into an Alt Right monster. But I want him to do well so he takes votes away from the Cons. Is there any way they could both lose?

A. 3:07 p.m. they will most likely both lose so don't worry. Pee pee max is just trying to find his footing out there. He is going to out crazy Scheer and that will work well. They will split the vote.

Pee pee max is most likely trying out some of dtrump's campaign strategies. if they work, he'll stick with it, if not he'll change. that is all I see in this. He is using the shot gun approach and seeing what sticks to the wall. going after the diary industry, might get him some help from the U.S. diary industry or politicians, you know strategists, etc. He may be trying to appeal to people who really, really need lower prices milk and that includes some consumers and a lot of corporations. From what I've read Save On Foods and one other corporation is going to be using American milk. All people in the various provinces have to do is check the cartons to see if its made in Canada and check the cheese and dairy products like yoguart to see if it says, made with Canadian and imported products. Its usually American milk. Just put it back on the shelf and move long. Here on Vancouver island, we have a chees company, well actually several and lots of people on Vancouver island just purchase their products. We the consumer can set the standards and send the message to pee pee. We don't vote for people who want to destroy our diary farmers.

Based on current membership numbers, Scheer is a walking zombie due to vote splitting if Mad Max and the Pee Pee party makes it to the next election. Unlike the Con leadership tag teams of Dougie-Allen, Kenney-Calloway, Max appears to be a genuine contender so perhaps a Brown type sex scandal blamed on Trudeau will push his deplorables back into the Con tent. Then again there is always the wheels of the big blue bus on a dark murky night with no witnesses except for a few bought off with high paying unqualified position IOU's. Is the next scandal just lurking around the corner?
RT

Hi Jackie....I agree that Bernier's ravings could further inflame the Con rabble, I think it's just because Mad Max is desperate. He has managed to set up an association in every riding, but as we can see so far his candidates are nothing to write home about. And he is also having trouble cracking the one percent point in the polls. He needs to get at least five percent to threaten Scheer and his Cons, so I expect to see him become even more extreme in order to try to build up those numbers. And it's all good. The more extreme he becomes, the more extreme Scheer will have to become, and the less chance he will have of expanding beyond his base. But yes, I haven't the slightest doubt that it will be the dirtiest election in modern Canadian history...

Hi anon....Don't worry, not only can they both lose, I'm almost sure they will. For even if Bernier does exceptionally well all he can do is hurt Scheer, because the Pee Pee Party isn't going anywhere...

Hi e.a.f...Bernier's obsession with demolishing the dairy cartel only makes him look like a one-issue kook. I have no idea where that obsession comes from, but if he wants to have an impact he's going to have to go full Trump and focus on the border issue. At least if he wants to have any chance of winning any seats in Quebec. Bernier clearly has the potential to hurt Scheer, but he also has a long record of shooting himself in both feet...

Hi RT...You seem to be saying that anything could happen, and I agree with you. Bernier seems to have a reasonable amount of support on Internet forums. But unless that support shows up in the polls it will mean nothing. And as you point out, with the kind of people attracted to his party scandal is a real possibility....

Desperate people will do desperate things!

I m running against the illuminati, he has my vote.

Forgot to mention earlier, I just love the picture of pee pee max. Can you do up some cards and market them. Hey its another revenue stream........He just looks so cute........so stupid.......I'd vote for the dog.

You people don't have a clue as to what's obviously going on this world.