The Cons and the Monstrous Keeper of the Flame 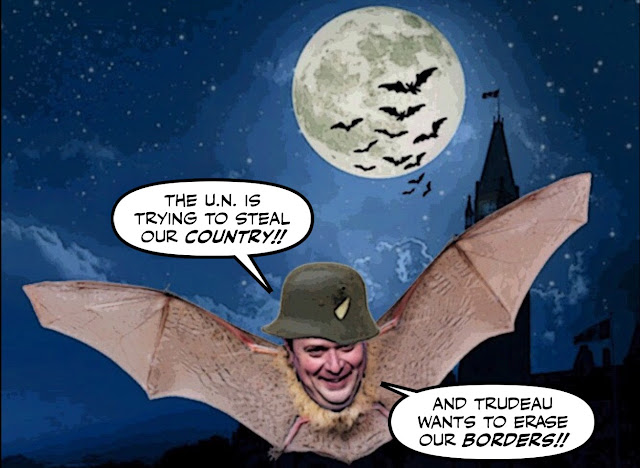 In my last post I looked at how Andrew Scheer had been caught accusing the United Nations and Justin Trudeau of trying to erase Canada's borders.

With what turned out to be a neo-Nazi meme.

But it's worth recalling that he wasn't the first Con to go after the U.N.

The ugly redneck MP Larry Miller got there first. 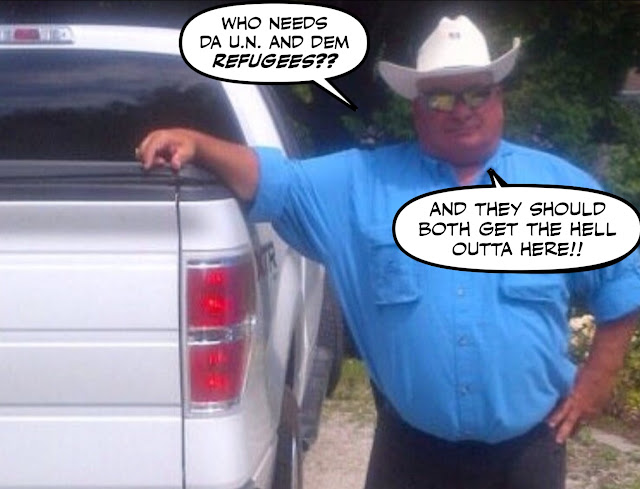 When six years ago he demanded that the Con regime pull Canada out of the U.N. for no good reason.

A Conservative backbencher wants Canada to be the first country in the world to leave the United Nations. Larry Miller, the MP for Bruce–Grey–Owen Sound, says he's upset the UN Committee Against Torture "voiced displeasure" with the Harper government's refugee-reform bill, and sent a rapporteur on food security to Canada.

But then, that was just one tawdry episode in Miller's long political career, and he had so many.

For who can forget his numerous racist zombie eruptions? 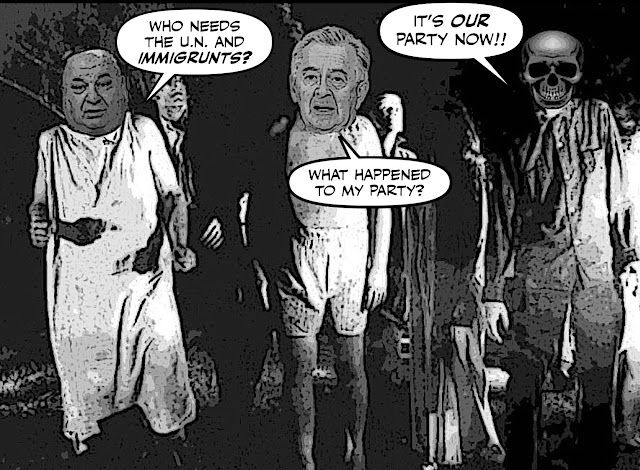 How he once tweeted out instructions on how to spot the Communists in our neighbourhoods.

Or the time he helped spread a fake news story claiming that Canadian Muslims wanted to legalize pedophilia.

Or the day he compared people on welfare to animals.

And then of course there was that time when he accused supporters of the long gun gun registry of sounding like Nazis...

Or the time when he couldn't restrain himself from bellowing his support for Donald Trump.

Bruce Grey Owen Sound MP Larry Miller doesn't have a problem with Donald Trump as President. In fact, he feels Trump will be good for the American economy and good for Canada.

And retweeting some extravagant praise for Marine Le Pen.... 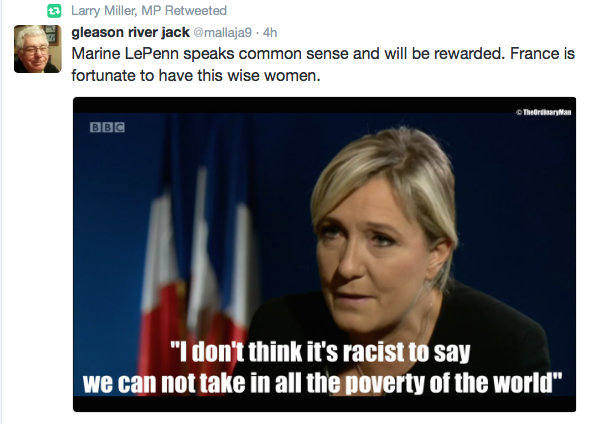 And if you thought that was as bad as Andrew Scheer spreading that fake neo-Nazi meme about the U.N. and migrants, brace yourselves.

For years Larry Miller has been known by the other Cons as the "Keeper of the Flame." 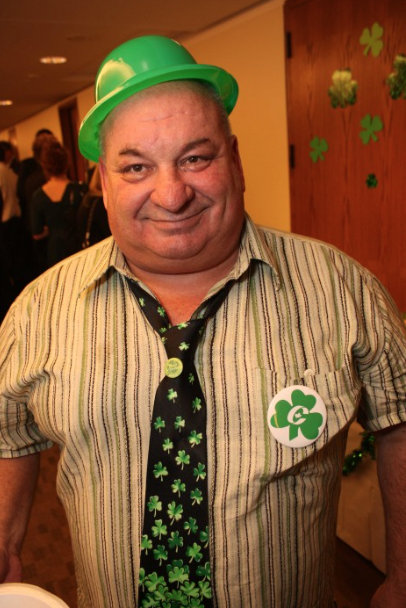 The "voice of principle" in the Con caucus.

Right. No wonder Scheer and his grubby gang have been spreading neo-Nazi memes.

And the good news? The flame went out years ago, and now at last so is Miller.

You know, I'm not surprised that Andrew Scheer is going to miss him.

But no decent Canadian will.

So Canada's Cons have their own Steve KKKing, eh? Didn't I say they were inbred sibling spouses of the GOP? Surprised he hasn't said anything about refugees coming over the 49th parallel having calves the size of watermelons. That reminds me: Faith Goldy was a favorite of America's own Iowa pig-farmer Nazi, and who could forget how Scheer seemed quite taken by Ilsa, Queen of the Duck Hunt too. Maybe she can hook up with Lebensraum Larry as her next sugar daddy, and they can roll around in the muck at Uncle Steve's Hog Farm in the town of Kissin' Cousins, Iowa. Only thing is, for the interest of animal welfare, you'd have to evacuate the pigs first.

If Larry Miller is Keeper of the Flame the Cons are even more ethically challenged than I had thought. He makes the late Myron Thompson look like an angel.

I think I actually heard Miller on a call-in radio show where he said that women who wore the niqab should go back to where they came from. Toronto? I would not wish that on anyone but still....

I think we should try to encourage Miller to move on and attack Sikhs and their turbans. Nothing like a young, fit, 6ft 2in pissed-off Sikh in a turban to adjust one's thinking (or teeth).

That last picture of the bloviated Miller makes me think I've just witnessed the world's first LepreCon. He is prone to mischief and as a retiring Con, the pot of gold at the end of his rainbow will undoubtedly contain envelopes stuffed with cash a la Lyin' Brian Mulroney, "When Irish eyes are smiling, no tax in need of filing."
I believe Larry is waddling off in to the sunset because the "principled voices of reason" in the Con party is a rather crowded place these days.
Good riddance to racist rubbish.
JD

It’s so wonderful that these kindred souls were able to find each other in this big cold crazy country. Love always finds a way.

Very fine people. The best. The most terrific, incredible. Bigly.

Hi Jackie...I just saw a tweet from Scheer praising his “friend” Larry Miller and I didn’t know whether to laugh or vomit. Miller was an absolute bigot pig, and only the Cons could call him the “Keeper of the Flame.” But they will pay a price for that. Tolerating people like Miller is part of the reason the Cons are where they are, wading around in the pit of depravity. And I am planning to use Miller as the ghost of bigot’s past to haunt Scheer all the way to the election...😱

Hi jrkrideau...Larry Miller was a Trump-like bigot long before most people had even heard of the orange oaf. And the way they embraced him both enraged and disgusted me. I could accept the presence of that bigot in their ranks, but glorifying him was the absolute limit...

Hi JD...yes, that picture of Miller in LepreCon garb, is enough to scare the little people back into their hidey holes. And imagine what he could be like after a few beers. But here’s the funny part which I forgot to include in my post. The Keeper of the Flame” says he decided to quit because he has lost the “fire in his belly.” And yes as you say, good riddance to racist rubbish...

Hi John...Yes, it’s a wonderful love story. They heard old Larry bellowing in the bush, and the Cons came running,,,❤️❤️❤️

Hi Jackie...I had no idea that the ghastly homophobe Granic Allen lived so far away. And I must say it’s a relief. But of course I will be pulling for her to replace Miller. With her in the Con caucus we’ll be able to keep on calling the Cons the super bigot party...☠️

Max took the Flame but garbaged the Keeper. Although there is room for bigotry in his party there is no room anything big government including government sponsored religious bigotry.
RT

wonder if he'll "defect" to the pee pee party. why the Cons keep him in the party is beyond me. They can't all be racists.