Donald Trump, the Joker, and the Toddler Pageant 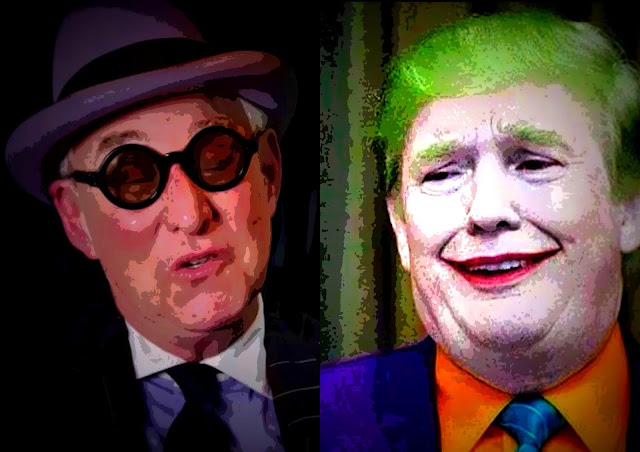 For by the time the day was over, he must have felt he was trapped in a bad Batman movie, and they were calling him The Joker and The Toddler.

Which as you can see left Trump trembling with anger, and paranoia.

Then he was humiliated by Nancy Pelosi. Again. 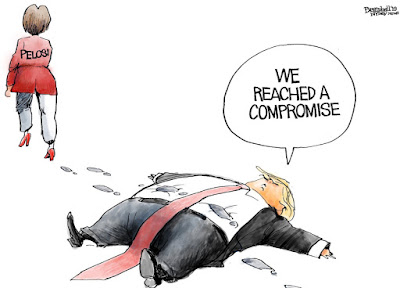 Who walked all over him, while Trump was forced to surrender and accept a deal to open the government that didn't include a border wall.

President Trump on Friday agreed to temporarily reopen the federal government without getting any new money for his U.S.-Mexico border wall, retreating from the central promise of his presidency, for now, in the face of intense public anger.

The president’s humbling concession to the new realities of divided government brought the nation’s longest government shutdown to an end on its 35th day. It was a major victory for Speaker Nancy Pelosi (D-Calif.), who took charge of a new House Democratic majority just three weeks ago and kept her large caucus unified throughout the standoff.

And then, as if all of that wasn't bad enough, then there was Ann Coulter... 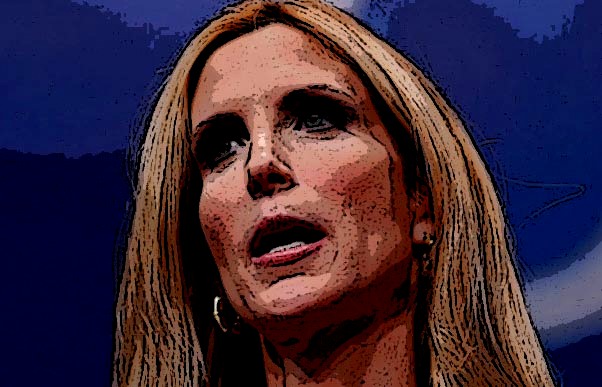 Stumbling out of her crypt to heap scorn on him, and call him a wimp.

While another far-right supporter Mike Cernovitch went even further.

Which strangely enough resembled what Paul Krugman seemed to suggest:

And although Trump sent out a late night tweet pleading begging for understanding:

And threatening another shutdown.

Nothing can change the fact that he CAVED.

And that his shutdown was a cruel joke.

What a debacle President Trump’s shutdown proved to be — what a toddler’s pageant of foot-stomping and incompetence, of vainglory and self-defeat. Mr. Trump tormented public servants and citizens and wounded the country, and, in conceding on Friday after holding the government hostage for 35 days, could claim to have achieved nothing.

He succeeded only in exposing the emptiness of his bully’s bravado, of his “I alone can fix it” posturing. Once upon a time, Mr. Trump promised that Mexico would pay for a wall. He instead made all Americans pay for a partisan fantasy.

It was a foot-stomping toddler's pageant. It was a horror show... 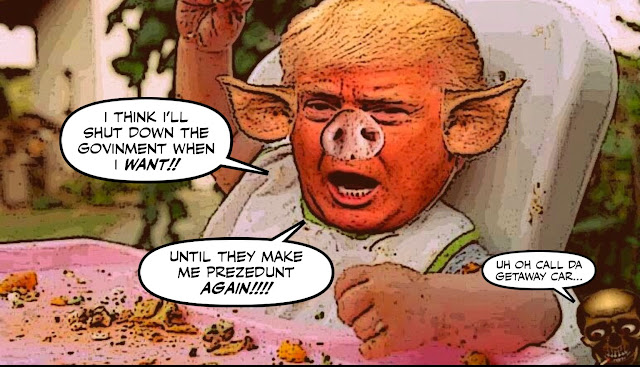 But the manbaby damaged himself badly.

He is still crawling towards his impeachment.

And if I were him I would start looking for a getaway car, or whatever. 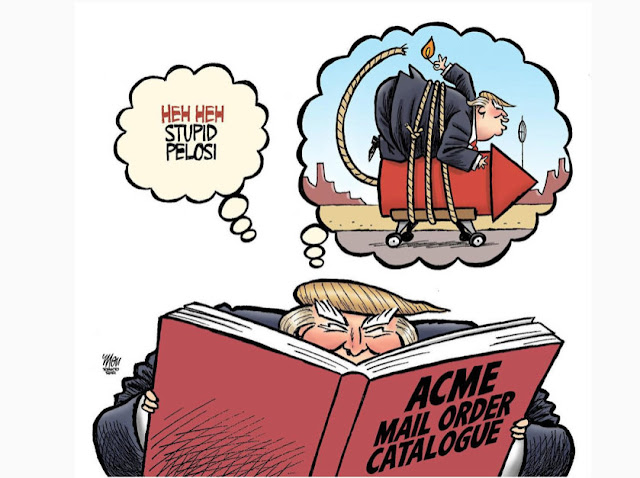 The fact that Trump's biggest supporters are turning on him and calling him weak will only embolden him.

Roger Dodger is a key player in the right-wing noise machine (Fox, Breitbart, Daily Caller, Ben Shapiro, Infowars et. al.), so for Canada's sake, I hope this blows wide open because he has so many links to Ruble Media you could spend forever chasing the rabbit hole.

For one, he's a member of Gavin McInnes' Proud Boys chauvinistic gang. For another, he's pals with Faith Goldy and even invited her and Milo to some bizarre party at his house. The common denominator is the Mercers and Cambridge Analytics, who we know were involved with Brexit and got Ezra Levant to run their Islamophobic garbage produced through the Gatestone Institute. Fumigate Rebel and you blow open the Cons.

Canada is part of Five Eyes along with the UK and US, so I don't doubt that as Mueller is coordinating with British intel to investigate Farage and the Brexit shitshow (which Scheer apparently still thinks is "cool"), he's probably coordinating with Canada's top cops on the Rebel connection. There's a lot more to this, and there will undoubtedly be more to come. A layman's explainer can be found in this thread from Sandy Garossino at the National Observer following the breadcrumbs with behavioral scientist and investigative journalist, Caroline Orr.

I guess Trump waxing poetically, "If you build the wall, crime will fall", couldn't sway any Dems to break ranks. Rather, here's a more fitting poem for the Orange Oaf, "Humpty Trumpy begged for his wall, 'till Nancy smacked him, right in the balls."
Nancy speaks so softly and may appear as a non-threat, but to Trump she is a roaring lioness who will keep the king of the swamp in check. I love how she reduces him to a quivering blob of orange, gelatinous material. He is absolutely petrified of her and I wish I knew why? Maybe she reminds him of a stern, controlling nanny or private school teacher Trump may have had when he was a child-baby and it has haunted him throughout his man-baby years.
Whatever the power is that Nancy holds over him, it will forever be his achilles heel(or bone spurs) hanging over him until he is either impeached, voted out, or hauled off to a place where the only bars he'll ever see are the ones in the windows.
JD

The Deep State wants only one thing from Trump. War in Syria and Iran. Every time he backs away from that Muller indites someone close. Watch carefully how the world works.

My take on people is if their parents loose the terrible 2s war, they've pretty much lost it for life. Along comes a Speaker, who has raised 5 children and has 9 children. Has a look at the President and thinks to herself, I've seen this show before. Pelosi did what billions of parents have done when a kid is going through the terrible 2, said NO and sent them to their room.

Trump under estimates women, hence he didn't even see this coming. People who frequently have high opinions of themselves under estimate the opposition. May be another mistake Trump made.

Trump over played his cards. He did not understand how the country works, how business works and how the industry covering flight works. There are these safety regulations and there are these people who work under incredible stress. they're called air traffic controllers. when they can't work others in the industry get concerned. One of those who got concerned was the President of the Flight Attendants Union and boy is she good. Great speaker. (hope the union movement in the U.S.A. pays attention. They could really use women like her.)

When planes stop flying these days, economies take a huge hit. Suspect some one phoned Mitch and he phoned Donnie. 6 Republican senators voted with the dems. They were most likely concerned the rest of them would vote with the Democrats, if there was another vote.

This might all be called THE REVENGE OF THE AIR TRAFFIC CONTROLLERS.

If you haven't discovered Empty Wheel, an American blog by Marcey Wheeler, have a read. Her editorial in the NYT regarding the Trump el al show is excellent. Found it on the blog role of The Pacific Gazetteer, by RossK in B.C. where he discusses music and these days the corruption in British Columbia. Those in Ontario might be concerned about that because our former Premier under whom it is alleged it all started, is now the advisor to Ford, Premier of Ontario.