The Absurd Trial of John McCallum 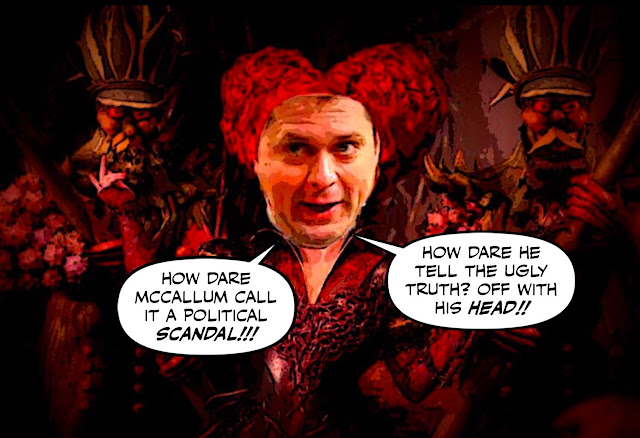 It was like the trial scene in Alice of Wonderland. With Andrew Scheer as the Red Queen, poor old John McCallum in the prisoner's box, and the Con media as his eager executioners.

For they couldn't make enough of this story.

They blew it up like a balloon. They made it sound like the biggest story in the world. They suggested over and over again that McCallum had done something REALLY bad.

And they gave the ghastly Con Andrew Scheer all the time he wanted to spout reckless nonsense for crass political purposes.


"If I were Prime Minister, I would fire John McCallum," says @AndrewScheer after @HonJohnMcCallum's comments that Huawei executive has 'quite good arguments on her side' #cdnpoli #scheer #MengWanzhou pic.twitter.com/O3YPyQBG4W
— Power & Politics (@PnPCBC) January 23, 2019


While never considering that McCallum might have been trying to calm the angry Chinese, and save the life of a condemned Canadian.

Or that McCallum is only guilty of telling the truth, or committing a so-called Kinsley gaffe.

John McCallum, ex-minister and Canada’s ambassador to China, has committed a gaffe, an awfully big one.

More precisely, he has committed what’s known as a Kinsley gaffe, named for the American journalist who came up with this definition: “A gaffe is when a politician tells the truth – some obvious truth he isn’t supposed to say.”

And that obvious truth is that the American request to extradite Meng Wanzhou was political, in support of sanctions we don't support. 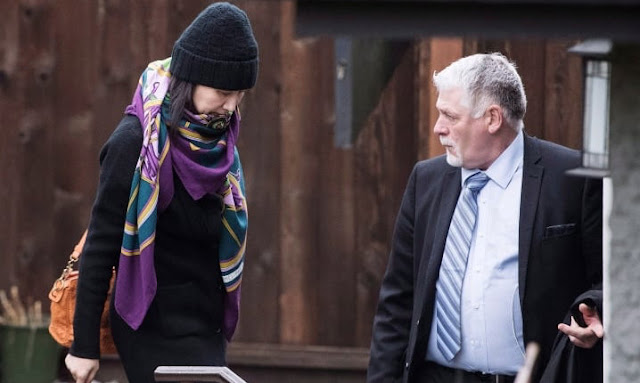 The U.S. Justice Department accuses her of fraud by lying to cover up Huawei’s violations of American sanctions against Iran. That’s arguably a political charge in itself.

Meng is being used as a hostage, or a bargaining chip, with Trump himself making that only too clear:

Donald Trump quickly put an end to any illusion that Meng’s case can be considered a purely judicial matter. He cheerfully acknowledged that he would “certainly intervene” to get the charges dropped if it would be good for national security or help to seal a trade deal.

And the bottom line is that like Meng we've been caught in the crossfire of a trade war between the U.S. and China. We're getting hammered for no fault of our own.

And to not speak up, or pretend that politics is not involved, can only make us look like a flunky country that any nation can bully.

When only the truth can set us free, and this so called "gaffe" could actually be useful.

China may still get the message that at least some Canadian officials have serious doubts about this case, and share their view that it is at bottom a political issue demanding a political solution.

It seems so obvious to me, but don't tell that to any of the members of this pathetic At Issue panel... 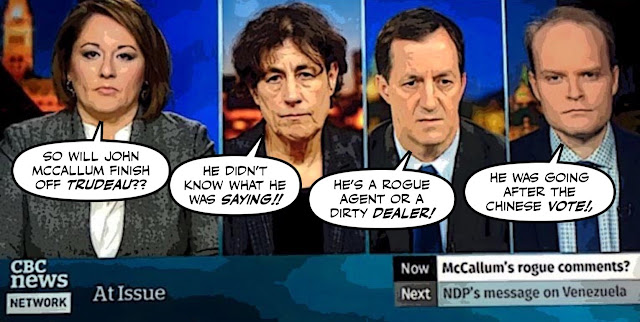 Who sadly didn't seem to get any of the above, but were instead so full of hot air, or Con gas, I'm surprised they didn't get up and float right out of the room.

And as for Andrew Scheer, he's so anxious to score crass political points he doesn't seem to remember what happened when Stephen Harper personally intervened in the case of a Canadian sentenced to death in 2015.

Like Scheer says he would do if he was prime minister... 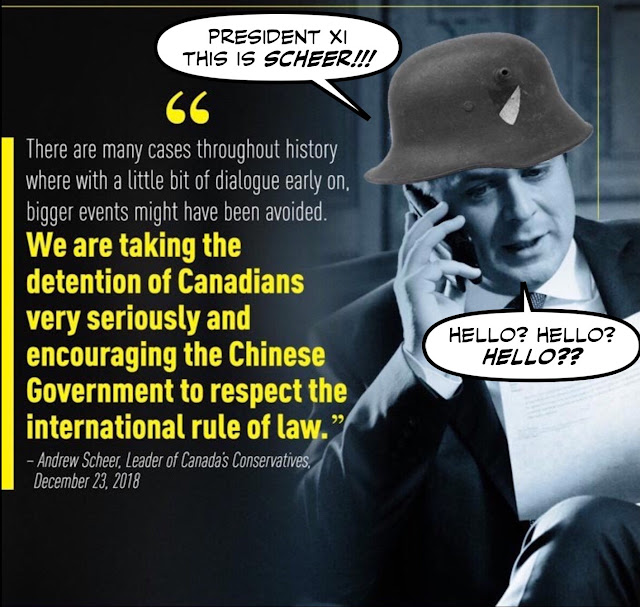 Only to have the prisoner executed the next day.

Which only serves to remind us yet again that Scheer and his Cons must never govern this country.

The world is far too complex for them to handle. For they really are too dumb.

And they really are too evil...

John McCallum has more class in his pinky finger than Scheer could ever hope to have and that pathetic "Ass Tissue" panel should just join the Scheer campaign and get it over with. What these clowns fail to realize is that we have a wise old owl over there in China who made those comments to not only ease tensions with China, but to point the finger at Trump for setting us up to do his dirty work.
I hope they cut her loose if they can as it should ensure the release of the 2 detained Canadians but the man on death row, I'm not so sure about that. The man has a drug related criminal past and China has always been harsh towards drug smugglers. Even if they commuted his sentence to life in prison as opposed to death, it would be a victory of sorts. The alternative is that our make believe PM Scheer or the other God he kneels before, Harper, calls China, tells them they wont take no for an answer, that it's a no-brainer and all 3 would be doomed for sure.
It's time to let the adults in the room look after this Andy. This requires tact, precision and respect which is something you Cons will never understand.
JD

Yeah, yeah, it's fun to play pretend, isn't it? If Andy was GM of the Oilers he'd have waived Wayne Gretzky for an umpteenth-round draft pick. If Andy was Robert Kraft he'd have told Tom Brady to go play baseball. If Andy was king of the forest his courage would come forth and he wouldn't be cowardly lyin'. If... then... else. Hamster boy's robot is having another logic malfunction and certainly a GPS error. He's not just trying to score political points with the deplorables at home. He's sucking up to the US and big daddy Trump. Even as the Trumptanic is finally sinking and the deck chairs are being thrown overboard (Roger Stone arrested today, yay!), Andy wants to buy a ticket.

Larry the cokehead Kudlow called Trudeau a backstabbing Judas during the NAFTA talks. No backstabber, no backstabber, Weak Andy's the backstabber. Anyone with two brain cells to put together knows Trump did this to "get tough" on China and cause further headaches for his reluctant nemesis Trudeau, to punish him for not folding like an origami card table at the trade talks and "cheating on" America by diversifying Canada's markets. How dare he hug a panda bear instead of cheerfully getting crapped on by an eagle!

Which calls into question yet again why the hell did Mr. Harper go to Washington, as we know both Donnie and Andy can't figure out Candy Land and are too fucking stupid to think of n-dimensional war games themselves. Any other "hypotheticals" he wants to entertain? Like Article 5 of NATO or continued involvement in the UN?

Mcallum spoke the truth. If she has not broken a law in Canada, she is free. Like witchcraft is illegall in the US and in Canada 666 all day long.

When Meng was first detained, Scheer and his media stooges portrayed Trudeau as being politically naive for not breaking the law and discreetly warning her away from entering Canada. For obvious reasons this tactic did not gain much traction so now its the opposite approach where the rule of law has been degraded into a political circus. The only circus is ambulance chasing Scheer and his enablers.
The real story is the China US trade war and who is going to get the honor of installing their spy ware on the 5G system. Not that any of this is of concern in Scheers Jurassic view of Canada's future.
RT

Old drunken McCallum *burps* shouldn't be making comments out of place. Unlike China, we have an independent judicial system. A judge will decide whether she's extradited or not. You're like a paid PR firm for the Libs, not once have you ever criticized them on this blog.

Hi JD....it's a sad state of affairs when a Canadian can't call a spade a spade without getting into trouble. Maybe McCallum should have passed on that message a little more discreetly. But it was the truth and the way the Cons and the Con media are trying to blow up this nothingburger of a story is simply disgusting. We need to defuse this crisis, and put the blame where it belongs, squarely on the Trump regime...

Hi Jackie....Andrew Scheer is now such a Trumpling he might as well be working for the orange oaf's state department. And you're right, it is like buying a ticket on the Titanic. We are the innocent victims of this U.S. China dispute, and we have every right to defend ourselves and let the Chinese know that they shouldn't take their frustrations out us. I hesitate to call any Canadians traitors, but the Scheer Cons are sure acting like them...

Hi Steve...As I said above, maybe McCallum could have been a little bit more discreet. But it was the truth, and trying to cover it up so as not to offend the U.S. Is simply pathetic...

Hi RT...yes, as you point out the Cons can't even get their story right. And they don't care since they'll use anything they can to try to smear Trudeau and his government.It's in our interest to have good relations with the U.S. And China. And this contrived affair is hurting our relations with both of them. It's absolute madness...

Hi anon...like millions of other Canadians I do support the Liberals, even though I don't agree with all their policies. But as least they act like Canadians unlike the Trumpling Cons...

McCallum resigned. Probably the better option on Trudeau's part, since Scheer doing any more jumping jacks on this file could get the detainee killed. Boy oh boy, Andy really is a student of Trump University. "GIMME MY HAMBERDER OR I SHOOT THIS DOG."

This was cleverly played most likely by McCallum and Trudeau. McCallum staged the press with the Mandarin and Cantonese press, said what needed to be said, Scheer went over the top, as expected. Then McCallum did repeat, wash, rinse, the message goes out as required and the Trudeau fires him. It may have been time for McCallum to come home any how. He'd been there a fair amount of time and its no easy posting.

Many in China and those from China who live here don't understand our judicial system and people actually have the right to defend themselves and the judges aren't part of the political party in office. McCallum made that point very clear. Now Scheers has been able to spin his wheels, wax on, some times you give some one enough rope, they hang themselves.