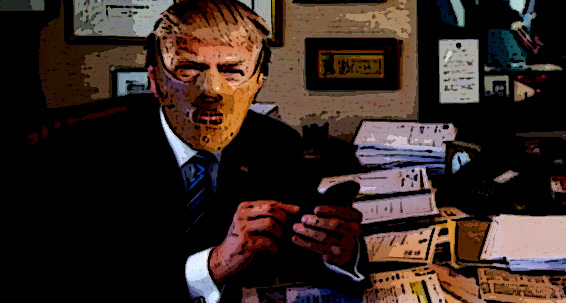 It's not hard to imagine how Donald Trump must be feeling like today. It couldn't be easier.

All you have to do is read this hysterical tweet:

This is what he is complaining about.


And yes, that was Trump's good friend being led out in his pyjamas.

Roger J. Stone Jr., a longtime informal adviser to President Trump, was arrested Friday by the FBI in Florida on charges that he lied and tried to tamper with a witness to hide his efforts to learn about releases of Democrats’ hacked emails during the 2016 presidential campaign.

Stone was charged with seven counts, including one count of obstruction of an official proceeding, five counts of false statements and one count of witness tampering.

You know, Roger, the sleazy Trump operative who looks like a Batman villain... 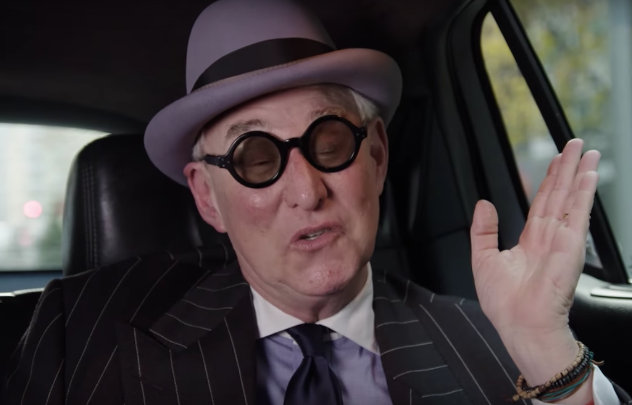 The one with a Richard Nixon tattoo on his back... 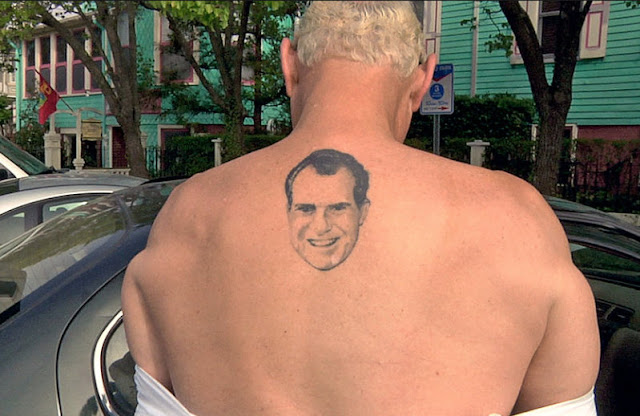 It's a decisive moment in Robert Mueller's campaign to dismantle the Trump crime family.

With Stone’s indictment, special counsel Robert S. Mueller III has struck deep inside Trump’s inner circle, charging a long-standing friend of the president. The court filing charges Stone sought to gather information about hacked emails at the direction of an unidentified senior Trump campaign official, and then engaged in extensive efforts to keep secret the details of those efforts.

And for Boss Trump it couldn't be more devastating.

The arrest of Roger Stone in the early morning hours Friday is another devastating political blow to President Donald Trump. It gives more ammunition to House Democrats to accelerate their own investigation plans, and it will certainly generate more fear among Republicans, even those who continue to stand by the President.

For Mueller has been busy.

And sooner or later he'll be coming for Trump. 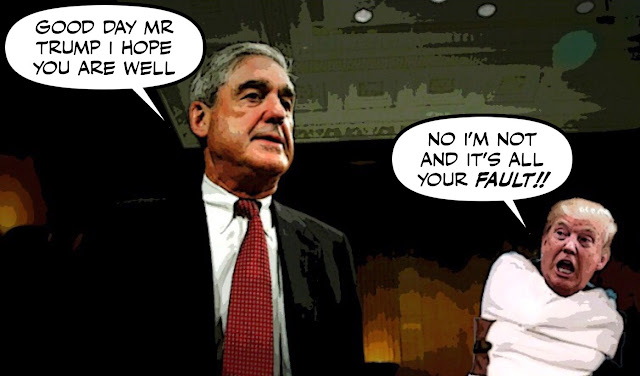 It has been a horror story. 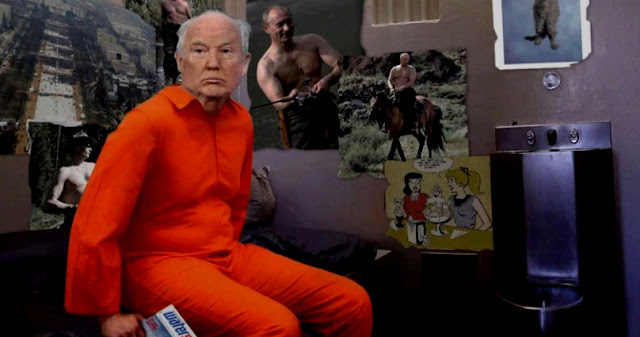 The government just got opened again (for now, at least) and he is getting $0 for WALL. He just got his fat hamberder ass handed to him by a #NastyWoman with Thor's gavel in hand. The only walls he should be thinking about are the ones caving in on him and the prison corridor he's going to be surrounded by. Or a padded room in an insane asylum.

I can't fucking wait until we don't have Fat Nixon to kick us around anymore.

Nancy Pelosi. Or, as Trump prefers to refer to her, “Nancy”! Mine got, he’s afraid of her! No special degrading nickname!

Glad to see Trump go down even if it was on a Trumped up charge. Fact is there was no collusion with Russia to win the election. A tower in Moscow is not a dead Seth Jones in Washington.

"Who alerted CNN to be there?" LOL! The g-men haven't been paid on over a month, you goon! A couple of shipments of coffee and donuts is likely all it took.

Why was the FBI grandstanding like that? It makes them look like a banana republic military. Unless the FBI had some reason to believe that Stone had hired MS-13 members as bodyguards, they could have walked up in daylight, knocked on the door and arrested Stone. Two officers in an unmarked car would have been enough.

@ Steve 7:23 PM
Fact is there was no collusion with Russia to win the election.

The USA is forever being subverted by evil foreign power in between attacks on the USA by the papacy, using Jesuits as shock troops or the Illuminati or the Masons.

Excerpt from a unidentifed Texas newspaper article of 1855:

It is a notorious fact that the Monarchs of Europe and the Pope of Rome are at this very moment plotting our destruction and threatening the extinction of our political, civil, and religious institutions. We have the best reasons for believing that corruption has found its way into our Executive Chamber, and that our Executive head is tainted with the infectious venom of Catholicism .... The Pope has recently sent his ambassador of state to this country on a secret commission, the effect of which is an extraordinary boldness of the Catholic Church throughout the United States.

It is amazing the country survived such an onslaught. The Catholics even got to the president. Now where have we heard something like this?

McCarthy pictured Marshall as the focal figure in a betrayal of American interests stretching in time from the strategic plans for World War II to the formulation of the Marshall Plan. Marshall was associated with practically every American failure or defeat, McCarthy insisted, and none of this was either accident or incompetence. There was a "baffling pattern" of Marshall's interventions in the war, which always conduced to the well-being of the Kremlin.

I love it when armchair law pros state that there was no collusion based on what they've read in the news.
The fact is Robert Mueller is a consummate professional who knows more about Trump's dirty deeds than we can ever imagine and he and his team alone will determine whether Trump colluded with the Russians or not.
Personally and without weighing one news story against another, I believe that a man who denies thousands of times without being asked that he did not collude with Russia more than likely did. If it's determined that he did not, then it'll be the only honest thing I've ever heard come out of his big fat mouth.
JD

Jrkk, if you know anything about Stone, you know he likes to take to the internet to brag about his guns. Any felony suspect known to be armed gets the heavy police treatment. He's lucky they didn't blow the hinges of his doors and go in throwing flash-bang stun grenades like they do here in TO.

Hi Jackie ...yes, there is nothing that beats seeing Trump being humiliated by a woman. That must really drive that grotesque misogynist crazy. And of course like you and gazillions of others all over the world, I can't wait until the Trump horror show is over...

Hi UU...I noticed that too. When he thought he could push Pelosi around he sure made a big mistake. I look forward to seeing her teach him lots of new tricks, like heel and roll over...

Hi Steve....Don't get my hopes up. Trump has not gone down, yet. I'll wait to see what Mueller has to say before jumping to any conclusions. But I will say this, you can be judged by the company you keep. And having a friend like Roger Stone does say something about Trump. And it's not good...

Hi anon...CNN says it noticed a lot of grand jury activity, and guessed that something big was about to go down. Nothing fishy there, just good journalism...

Hi jrkrideau...I grew up close enough to the orange followers of the late Ian Paisley, who blamed everything on the Pope, who he called "Old Red Socks" or the "Whore of Babylon." SomIncan understand where that anti Catholic bigotry comes from. And I'm against it even though the Catholic hierarchy is bigoted against me. But as for the Russia story I'm waiting to see what Mueller has, to say before jumping to any conclusions...

HI JD...I too believe that Trump has engaged in something sordid with the Russians. I just don't know what it is, a case of kompromat, or some kind of money laundering scandal. But I have confidence that Robert Mueller is a decent man. And I just wish he would bring down his report tomorrow so we can finally find out what has really been going on. And if it results in Boss Trump eventually being indicted, so much the better...

Mueller can deal with all of this without dealing with Trump. Its better to leave Trump where he is. The Democrats will have some one to target and the younger Democrats can run on alternatives to Trump's agenda. Without Trump, the Republicans have a better chance of winning.

Various blogs and media outlets were predicting Stone's arrest the following day so it ought not to have been a surprise to anyone.

Rideau, they came with a large team because they had extensive search warrants and for those they need a lot of people to be able to search the home very quickly and thoroughly. They weren't all there for the arrest.

Trump's "association" with Russia begins back in the days when it was the Soviet Union, some where in the 1980s. It just went on from there. Putin comes to power and he sees an opportunity. It is estimated Putin has amassed approx. $200BILLION. When you have that much money it has to be "dispersed" somewhere and a really safe place is the U.S.A. Some estimate approx. $6Billion has been laundered through one bank in Estonia. (sorry can't remember the name but it starts with a D.)

Trump does Putin's bidding. If you go back to the meeting in Helsinki, watch how Trump's shoulders are slumping when he comes out of the room with Putin and goes to the podium. Looks like some one beat him up.