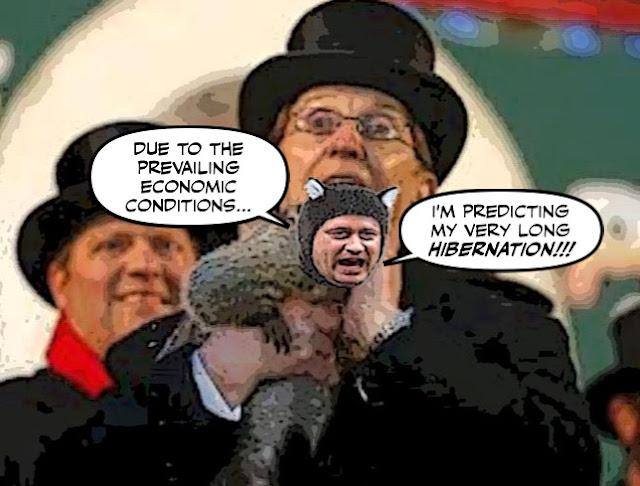 It's just as well Stephen Harper didn't choose to emerge yesterday from the hole where he has been hiding for most of the winter.

For it was Groundhog Day, and he probably would have felt like all those other poor furry creatures awoken so rudely from their hibernation.

Blinking in the bright TV lights, and being asked to explain why his campaign prediction that sunny economic days were ahead, could have been so horribly wrong.

Or even worse for Great Furry leader, having to answer questions about this act of Con bestiality. 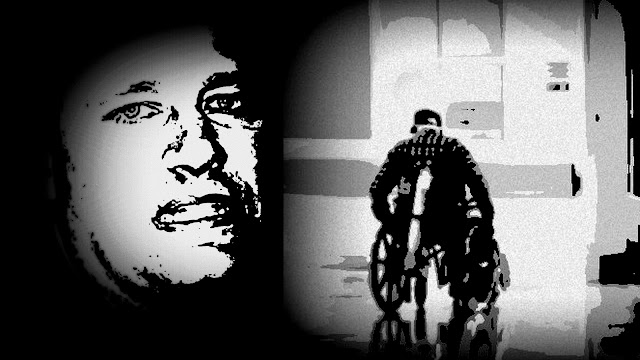 This brutish assault on some of the poorest and most vulnerable Canadians.

In his annual fall report released Tuesday, the auditor general uncovered an average processing delay of 884 days that has left Canadians with severe and prolonged disabilities — such as nervous and circulatory diseases, cancers and mental illness, among others — waiting for a crucial source of income.

Delaying the survival money of thousands of suffering Canadians by setting up the so-called Social Security Tribunal of Canada. 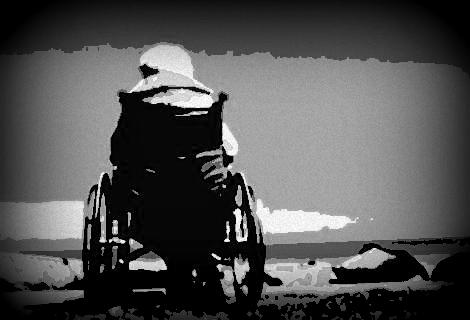 The Social Security Tribunal of Canada, created by the former Conservative government following the 2012 federal budget, was tasked with processing disability claims under the CPP, a program the vast majority of working Canadians contribute to through their paycheques.

But the backlog of cases waiting for an appeal has nearly doubled since the tribunal's creation, from 6,585 cases at its creation to 10,871 by December 2014.

Which as its very name makes only too clear, was designed to treat those suffering people like criminals, and deprive as many as possible of their badly needed assistance.

No matter what the ghastly Diane Finley said at the time... 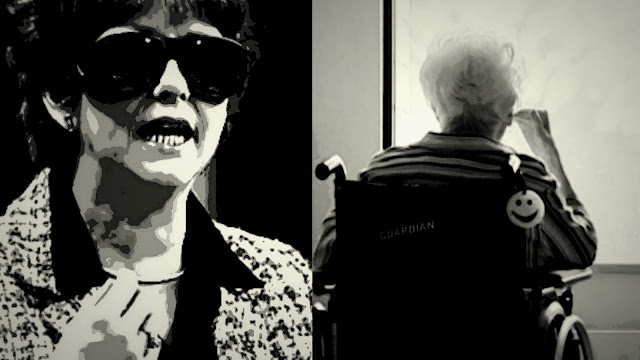 This outcome is the exact opposite of what former Conservative minister Diane Finley had expected when she implemented these changes to the tribunal in 2012. Finley told CBC News at the time that the new process would be faster and eliminate overlap.

For she's the Con beast who also made it harder to collect E.I. benefits, and has always waged war on the poor, or tried to shame the unemployed.

Like her depraved leader always did, the one who couldn't feel the pain of others... 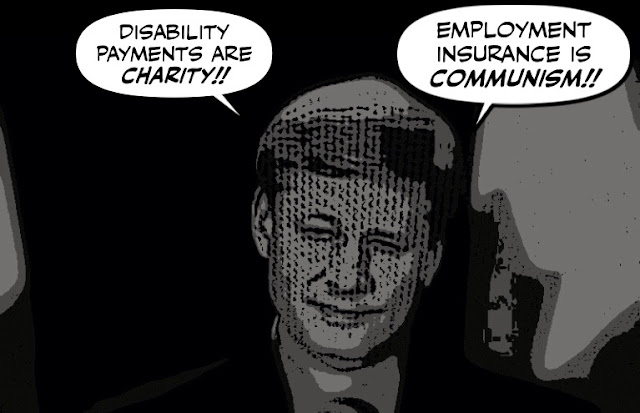 But did enjoy mangling our precious Canadian values to try to turn this country into his savage jungle.

And if you think that Rona Ambrose's new/nouveau Cons are any better you can forget about that.

Because what were those foul zombies doing on the day when their Canada Pension Plan scandal was revealed? 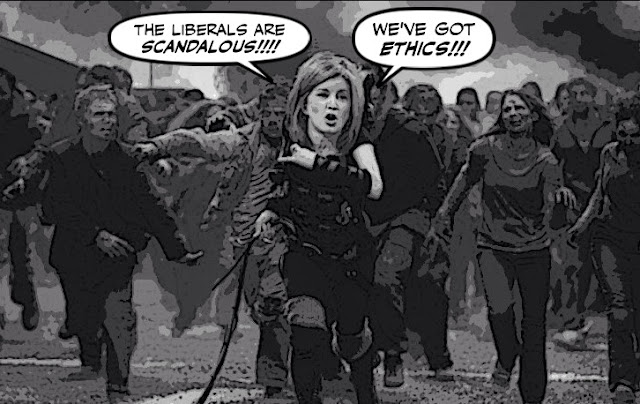 For sending out letters to try to correct Stephen Harper's last-minute patronage scandal.

At root of the charges and counter-charges is a patronage binge which the former government launched on the eve of last fall's election, making or renewing appointments for federal positions that didn't need to be filled until weeks or even months after the Conservatives were defeated.

Which was designed to cripple Justin Trudeau's government.

For the Cons will turn the truth on its head, they will say anything, and they are shameless.

And the good news? We will use all of the above to attack them, and help finish them off. We will remind Canadians how they deliberately tried to hurt the poor and the disabled.

And if the Cons want to play the scandal game, the Liberals should set up a public inquiry to investigate all of their scandals.

So hopefully the grubby groundhog Stephen Harper can hide in his hole.

But will not escape his day of justice.... 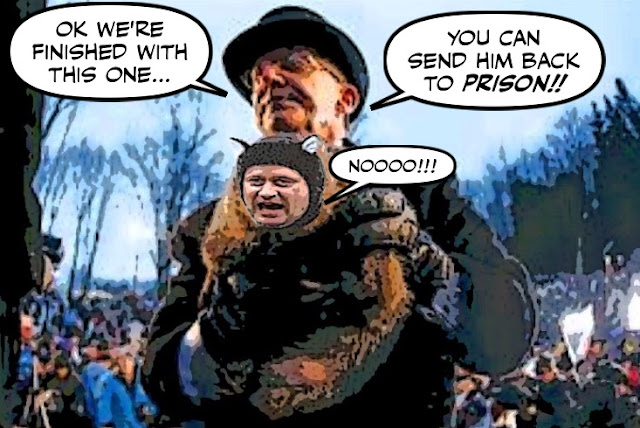 .. you're reaching orbital levels of scathingly accurate illustration, Simon.. its become impossible for the slimy trails of Harper and his gutless wonder political herd.. Last night Ms Rempel was the latest to shrug off how they failed disabled Canadians caught in the ground hog day debacle of payments under CPP .. 'there's always room for improvement and whatnot' hardly describes the shocking callous failure that escalated in 2012.. average of over 800 days for review of applications.. even those terminally ill ! ! !

The Social Security Tribunal of Canada was possibly a good idea. However if I heard the Auditor General correctly on CBC radio he pointed out that the estimate was that approximately 95 staff members were needed to support it and the Cons supplied roughly 20.

Or, in other words, set it up to fail. I find it difficult to believe a Harper Con gov't would ever do something like this.

Smoke and mirrors those cons. Budgets that never got spent that ended up being a "surplus", while returning soldiers and disabled persons went without. Harper toiling away at his big desk in the wee hours working hard for Canadians, but was just looking for the Christians in the pile of Syrian refugee applications already screened by the UN.

It is a nasty mess, and I think a conundrum for Trudeau. If he digs too deep and calls an inquiry, he risks disenfranchising people from their government once again. Will be interesting to watch, I have a feeling we won't be disappointed.

Love the photos, Simon. Is SH on "Vacation"? Didn't know you could get vac pay for these many days! People in his riding should be OUTRAGED!

The Cons are famous for their Orwellian doublespeak. The Social Security Tribunal to speed up approvals is just another example. Others from a long list include Fair Elections Act,Canada's Action Plan,Friends of Science, Ethical oil, Clean Coal ....
RT

of course the appeal process was going to be a mess. In my opinion, that is what the cons wanted. You save money when people die and not having money while very ill, can cause you to die sooner. These appeal boards were nothing more than a method to "reward" the party faithful with more jobs and control more of the federal service.

if the Cons had truly wanted to speed up the appeal process, they could simply have added a group of adjudicators, who reviewed the appeals and given them the authority to change the initial decisions. Its faster and cheaper.

Now we know more of the truth about the Cons and their methods of doing business and can be even more happy we have a new government, who might fix things.

This story ties in perfectly with the outrage I felt the other day while reading a comment posted on Facebook that's making the rounds in the Harper sycophants cyber world. The story is about a little girl who tells a neo-con that she wants to be the PM when she grows up so that she can feed and find shelter for our homeless Canadains. Of course both of her parents are simpleton Liberals. This fine example of human empathy then proceeds to tell the young philanthropist that she will pay her 50 bucks to do her yard work and then she can go and give it to a homeless person. The Little one says, why doesn't the homeless person do her yard work, to which the vile heartless reformer replies, now you're a conservative.

Simon, one of my buddies growing up was diagnosed with acute schizophrenia at the age of 17. His parents died shortly thereafter and he has lived on the street ever since, because they closed down the Brockville Hospital that used to help and house these poor victims of mental disease. Through no fault of his own, he has had to survive in shelters and on the street for almost 40 years, and then there is the soldiers suffering from PTSD who were thrust into a war of aggression, rather than the blue hat peace missions which we as Canadians were proud of, and was looked at as part of our duty to help, rather than hinder free people. They can't reassimilate back into our society and end up falling through the cracks because war is hell. It makes sick to see the levels of depravity and reading the cold hearted crap these socalled protectors of our tax dollars will sink to.