Why Playing Nice With the Cons Won't Work 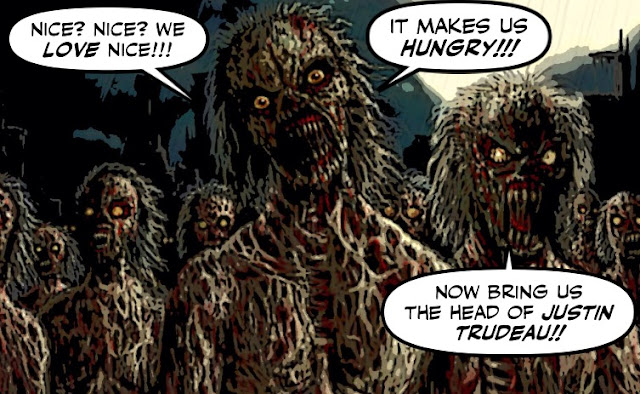 I learned long ago that if you want to help build a more equal, kinder, gentler society, you have to be as tough and as ruthless as the Con zombies who infest this world.

For they will try to destroy you, and being nice will get you nowhere.

So when I heard a group of hapless hacks on CBC's Power and Politics nodding their heads, like pigeons do when they walk. And agreeing that Rona Ambrose was doing a GREAT job as interim leader of the Harper Party.

Not those lying Con artists !!!!


Can you believe it? Ambrose and her Cons are still flogging the Big Lie that Stephen Harper left us a surplus instead of a whopping deficit in the making.

Even though it couldn't be clearer, considering the state of the economy, that he didn't know what he was doing, and he was no Great Economist Leader... 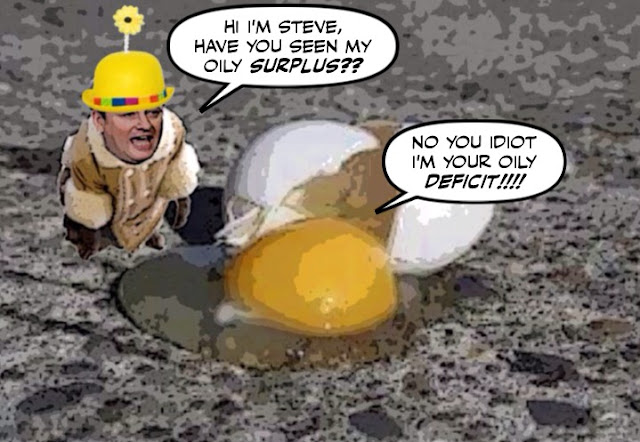 And all the Cons are doing, as Aaron Wherry points out, are playing cheap politics. Or playing with the numbers.

For the sake of an impartial source, one might note that, in November and before accounting for any new policies, the Parliamentary Budget Office projected a surplus of $1.2 billion. Such a tiny surplus is relatively insignificant, but the Conservatives are obviously keen to establish that the Liberals are creating a deficit where one did not previously exist.

But then, while the PBO gave the Conservatives that surplus for 2015-2016, the budget office also projected deficits for the subsequent five fiscal years. That rather complicates the narrative.

And doesn't that video I just played sum up the situation? 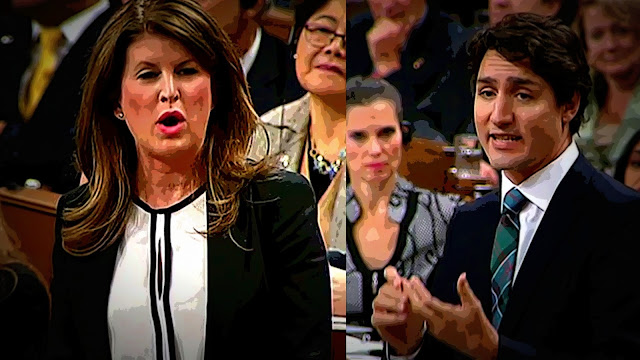 With Ambrose lying like a thief, and Justin Trudeau still trying to be nice.

Even though this IS fraud... 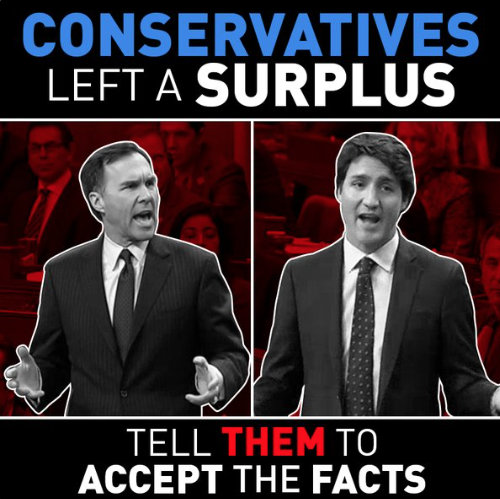 And if there was any justice those scummy Cons would be in jail.

Which is why I like this other video clip a lot better.

Where the absurd stooge Lisa Raitt, who has also been peddling that Big Lie... 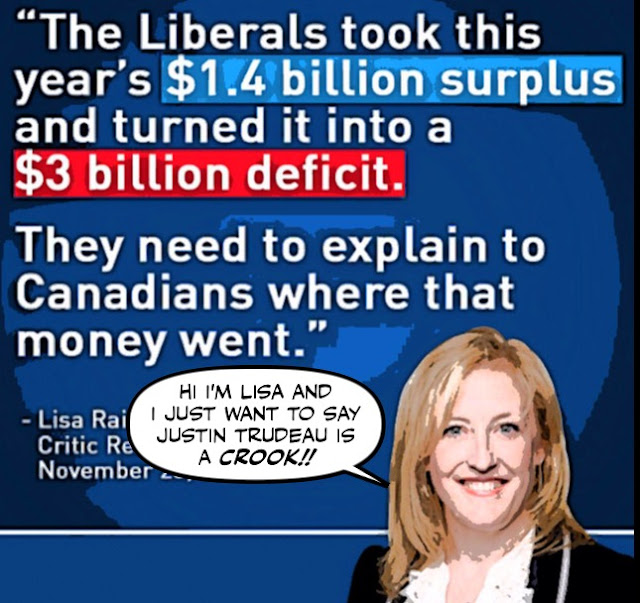 Because she too is shameless.

Tries to pull a fast one again.

Only to be put in her place, or told where to get off, by the Finance Minister Bill Morneau...

Because it is way past time that progressives stopped being so nice, and started fighting back.

The Con and their ghastly stooges in the MSM are trying to bury us under an avalanche of lies. They're trying brainwash us again.

Like their depraved leader leader tried to do so many times and for so long... 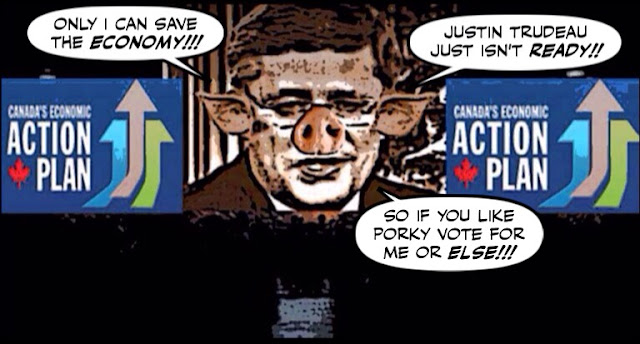 And we've got to stop those filthy Cons like we stopped Harper.

We've got to hit them with the truth, we've got to expose their lies. We've got to remind Canadians what they did to our Canada. And how they were the worst and most morally corrupt government this country has ever known.

We need to investigate them, and hopefully put them on trial.

We have to go after them on social media as we never have before... 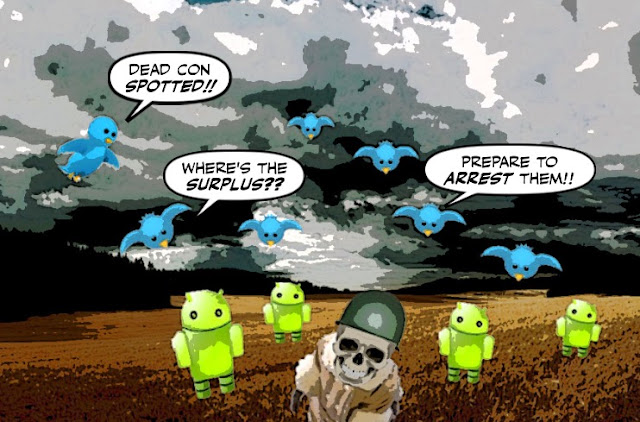 For nice doesn't work with them. They will keep trying to destroy us.

And if we are ever to build that better Canada.

We must destroy them first...

Trudeau and Morneau are great in the House. Good cop bad cop. Rona is just the dumb kid who wondered in from the class field trip.

She is not beautiful anymore

It's terribly sad that it has come to this. The dream of a Question Period with constructive criticism and healthy debate is just that, a dream. How did it come to this? Two words. Stephen Harper. Since he became the leader of the ReformaCons he has poisoned the well of politics so badly that it will take a generation to fix it, at the very least. I had many good friends back in the Mulroney/Chretien era who were conservatives and me being liberal, we would tease and taunt each other(in a friendly way)about the issues of the day and it would end there. No harm no foul. Since Harper came on the scene their playful teasing turned into a nastiness that I would not put up with so the result was that I lost many good friends. They became part of what we call their base. More victims, my brother, haven't spoken in years, my sister, if I even mention JT her whole demeanor changes, almost like she's possessed, so we don't talk politics.
Your first graphic with the zombies is so fitting Simon. Whatever good that was in the conservatives of old is long gone. Harper's legacy will be one of shame and loathing and I'm sure others have had similar experiences to mine.
Harper's divisive poison has affected so many lives in so many awful ways that even he is too ashamed to show his face, and that works just fine for me.
JD

Every time I hear someone say something positive about the Harperites, I reread this article.
It is grist for your mill Simon. http://thetyee.ca/Opinion/2015/08/10/Harper -Abuses-of-Power-Final/

Isn't it amazing how a lot of people have been brain washed and are now sounding exactly like the ReformaCons. Acting like stupid idiots.

The great oily messiah and his flunkies ran an average budgetary deficit of 13 billion/year while in power and an annual trade deficit of 9 billion / year over the last 6 years. Now they want us to believe they balanced the books and left Canada in great economic shape. The sad / criminal thing is that instead of using deficits to rebuild our value added manufacturing industries after the 2008 crash they decided to teach the supposedly over paid workers a lesson and pursue digging tar.Other smarter countries renegotiated worker expectations, invested in technology and have gained market share while we are still digging tar and now selling it at a loss.Canada faces a challenging future, once jobs are given away its very hard to get them back especially with the zombie Cons dragging on our ankles every step of the way.
RT

The Con War Against Science...

NEEDLE EXCHANGES ARE ???
not ideologically compatible

loved the picture of Rona on her pins in the House of Commons, with none other than Diane Watts, former Mayor of Surrey, B.C. sitting next to here. Great team those two. Watts left Surrey politics for federal cons. of course the city she left is full up with drive by shootings, drug dealers, etc. And what did she do while Mayor, nothing, just like her lap dog RCMP chief, Bill Fordy. She looks good in the front row of the cons. she comes from Surrey, they've got a lot of cons there too, along with homelessness, but no shelters. What a riot to see those two together. Could say the clue less leading the clueless.

hi TS...Morneau is usually a very pleasant mild mannered man, but I guess even he finally lost his patience. And I hope we see more of that, because nobody should have to put up with that garbage from the Cons. Not after all the damage they dis to Canada....

hi Steve....she's always been too mean to be beautiful to me....

hi JD...yes it is sad that the Cons can't change, and are still trying to turn Question Paeriod into a Roman circus as they did for so many years. But as you point out, Harper poisoned the well, and made them in his own image. So we shouldn't be surprised that they're still acting like his little monsters, but neither should we take it lying down. They're not in power anymore ,and we should let them know it...

hi hinofan....yes I have that list filed away for posterity. One of the reasons Harper is in hiding is so as many Canadians as possible forget what he did as soon as possible.
So it is important to keep reminding people what he did to this country and its values. And that the Ambrose Cons are just more of the same...

hi Irene....yes, Harper suckled them for so long they are still his faithful stooges. But as I said in my post, the more they sound like him, the easier we will destroy them...

hi RT...Harper's economic legacy couldn't have been worse for this country. He not only tied us to his oily obsession, he failed to develop an industrial strategy that could have prepared us for what will almost certainly be a greener future. And for that alone we must never let the Cons garnish his legacy and keep reminding Canadians what he did to our Canada....

hi anon...needle exchanges make absolute sense, and are an important part of an overall strategy to control heroin abuse. They should not be a partisan issue, and the way the Cons tried to turn it into one is simply unforgivable...

"Those who do not remember the past are condemned to repeat it."
-- George Santayana