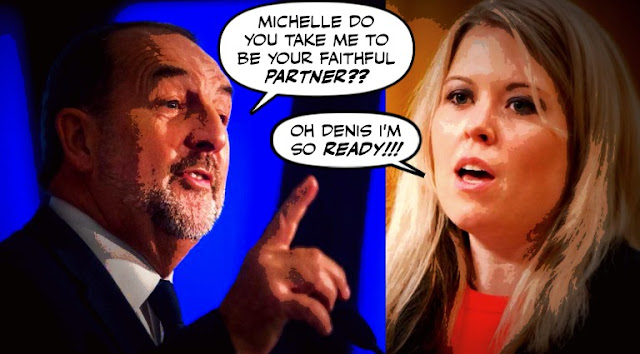 Well we all knew Michelle Rempel was desperate, and I mean desperate to become the interim leader of the shattered and shell shocked Cons.

Her late night boozy woozy Twitter monologues have made that only too clear.

But who knew she was so desperate that she'd enter into a bizarre political marriage of convenience with of all people Denis Lebel?

We would bring depth in talent in political management, vigor in communication, and represent gender and language balance to this role. We will provide you with more information on our managerial, communication skills, and party activist activities.

It's not the idea that's so weird. As Rempel points out that's what they did just before Harper became leader. One Con became the Leader of the Opposition, while the other one became the party leader.

What is truly bizarre is that after going on at length about all the things that need to be done to renew the Cons, she would hook up with an old hoofer like Denis Lebel... 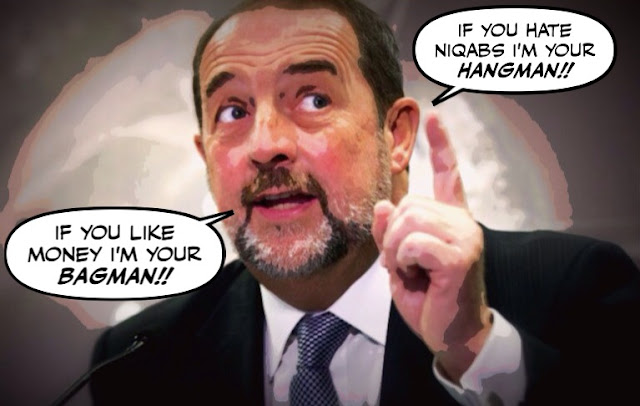 Who is best known in Quebec as being the guy who trotted behind Stephen Harper carrying a big bag of money, to try to buy the love of the province.

The one who kept beating the bigot drum on the niqab issue until the very end of the campaign, long after other Cons had moved on to other subjects.

And of course as the Minister of Transport who beat a hasty retreat from that portfolio very shortly after the Lac Megantic disaster... 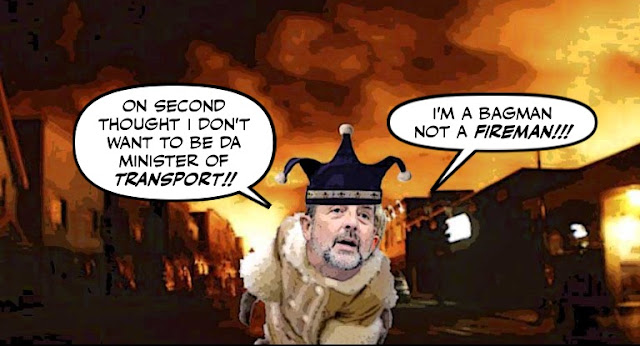 So Rempel needs a renewal partner like that one, like a drowning man needs an anvil. Or a burning one needs a gas station.

Or for that matter, like Jason Kenney, who is lusting after the position of permanent leader, needs Rempel reorganizing what he now considers HIS party... 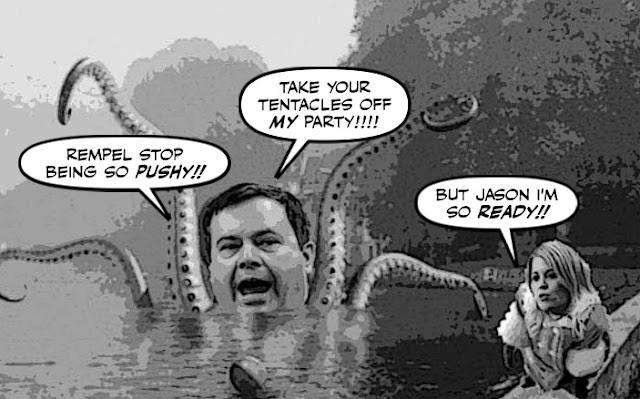 So there will be trouble.

But what I find so striking is that there are now eight Cons pursuing a position that would disqualify them from running for permanent leader, and that all of them are so mediocre.

Which tells me two things:

One, the only thing that can explain this unseemly stampede must be the perks that come with the position.

The official Opposition leader gets an $80,100 boost to the MP’s $167,400 base salary. The interim leader would also get the car, driver and right to live in Stornoway, the Opposition leader’s official residence in Ottawa’s tony Rockcliffe neighbourhood.

Which raises the interesting question, if Rempel is chosen will she share Stornoway with Lebel?

And will that make her feel secure in her bed as she once did when Big Daddy Harper was still around? 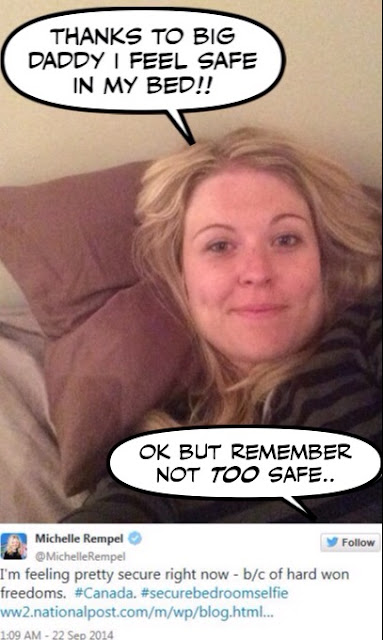 Or even more secure? 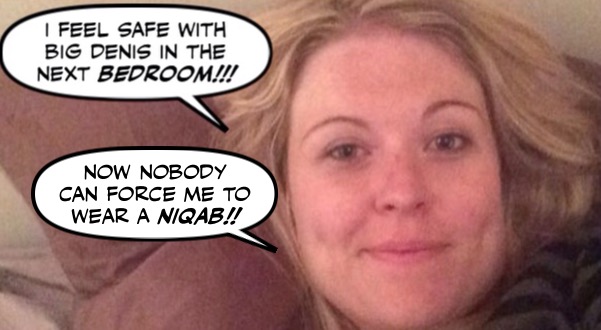 Secondly, it also tells me that Harper never prepared them for a future without him... 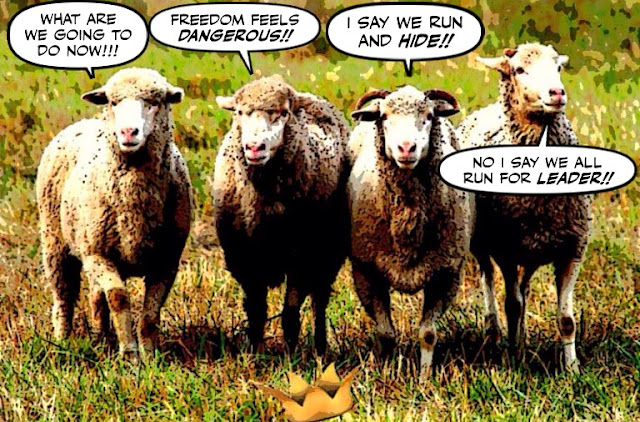 So the surviving Cons are having trouble dealing with their new freedom, and the new reality.

And thirdly and most importantly it tells me that the party is badly divided along regional, ideological, and other lines.

And that while Stephen Harper held those factions together by pure terror, like Saddam Hussein once did before he was toppled.

Now that he is gone it could all fall apart... 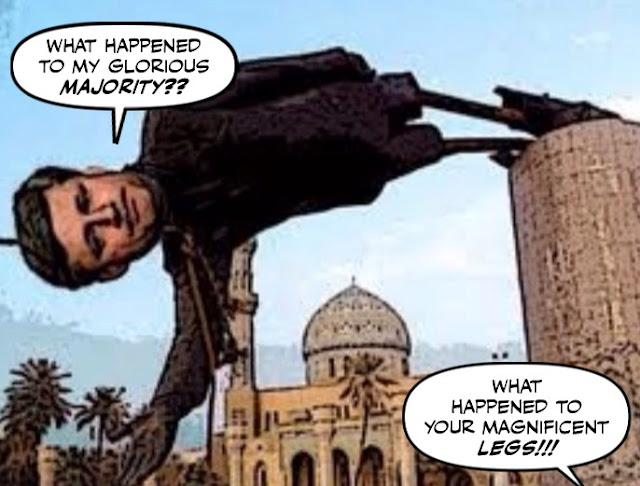 And isn't that a nice thought?

The dictator has been brought down.

Steve has just two days left to go before he gets the heave.

His Cons are preparing to tear themselves apart.

And after ten nightmare years we can all sleep securely in our own beds, I think... 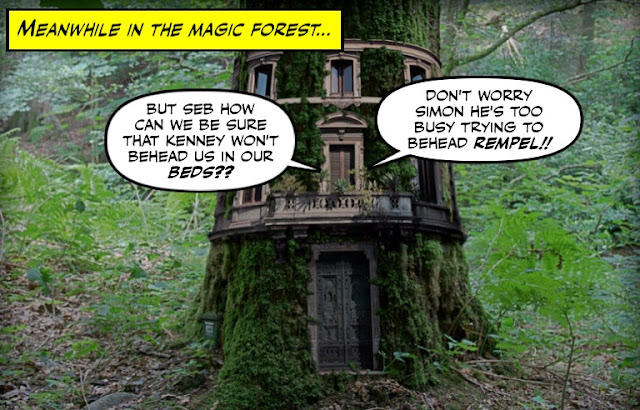 The fact remains that no one who becomes an interim leader or leaders can become the official leader in the next 4 years. That's why Jason Kenney and a few others such as Pierre Poi LIE bee and Michael Chong are keeping quiet right now. Would't that be great if they passed on a man of principle such as Chong and elected Pierre? 8-)

I meant to type: Pierre PoiLIEvre.

Ego and the perks are two driving forces for the stampede to be interim leader but suspect it is also the promise of a financially secure afterlife in some large corporation. The Cons had 10 years to plant "industry friendly" personnel at all levels of government and the opposition leader will still have opportunity to pull those levers for the next year or 2 before the chain is broken.
RT

(October 5, 2015)
"And he promised his government would put the newly signed Trans-Pacific Partnership to a “fulsome” discussion with parliamentarians and the public before making a decision on whether to vote for it."

Sure anon 9:28 but Trudeau also holds the reins of a 'majority' and the 'whip' he can do what he wants but I hope he opts out because the TPP is nothing more than a corporate plunder of democracy. It is about as far from 'free trade' as the Earth is from Uranus:

Simon I hope the con party implodes with back-biting finger pointing and blaming for Harper's demise and it all blow's up in Harper's face as disenchanted cons start spilling the beans about what really went on behind the scenes in Harperconland.

Yep! Get ready for harpet-lite. Sooo many people here in our new fearless leader's vaterland are soooo against the TPP because of what it will do to Canadian companies but harper's protege is going ahead anyway.
Ya just know it had to happen. They don't get called liberocons for nothing, ya know!
I leaned that term from another blog out there but at first I couldn't quite get why he would say that. I'm getting it now and soon we'll all be getting it big time if the fucking TPP goes through. And abe is definitely another uber right wing piece of shit so, thanks justin! You're going to make all my misgivings come true. I can already see that.

hi David...yes that's true, although Tasha Kheirridin is suggesting that having co-leaders would allow Rempel to step aside later and run for the leadership herself. And yes, I too would support the candidacy of the buzzing Pierre Poi Lie Bee....;)

hi David...I know but I like the Poi Lie Bee better...

hi RT...well that's my impression. But remember the interim leader might have as long as two years to make his or her mark. So maybe some of those candidates, especially Rempel, believe that if they do a good enough job the caucus will disregard the rules and make them permanent leader. The other reason at least a couple of those candidates might be thinking about is just doing what they can with the position of leader to try to block Jason Kenney. We'll get a better idea of that after the leader is chosen on Thursday...

hi anons...I think it's too soon to judge Justin Trudeau on the TPP, since nobody knows what is in that deal. And it's certainly too soon to call him Harper lite. He hasn't even been sworn in yet, so give the guy a chance...

hi anon...you're not suggesting that Rempel was drund are you? As you may or may not know she is a sommelier, or wine expert. And you don't get to be a wine expert without an occasional bottle or two... ;)

hi Mogs...I think that there is a very good chance that the Harper Party will implode or break up into its component parts. It was always held together by fear and power. And now that both are gone, and there are no obvious leaders, I'm looking forward to watching the feathers fly...

You mean can you catch birds but now seriously I am looking forward to blood and guts I'm a half barbarian and the other half that quells the barbarian? Angelic so I'm split. A half/n/halfer lets nail his carcass to the political wall and be done with it eh?