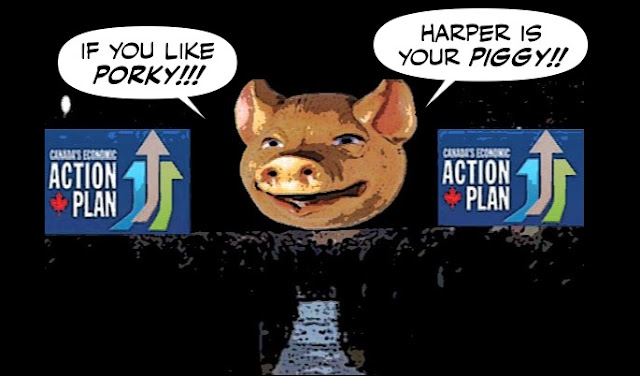 For what seemed like forever, they were the ads we couldn't get away from. The Con's porky Economic Action Plan ads coming at us from every direction twenty-four seven.

Trying to brainwash us into believing that the Cons knew what they were doing. And that Stephen Harper was a Great Economist Leader.

They were irritating, they were maddening, it was like North Korea, or Big Brother. Or like some giant hog screaming at us "Vote for us and we'll pay you!!!"

So I'm glad to see that ghastly hog has finally expired.

Canada’s Economic Action Plan is dead. The slogan used by the Conservative government to promote its budget measures and infrastructure spending had long been heavily promoted online. However, the links and images are now being removed across federal websites.

Because It was blatant political propaganda. The Cons did spend a fortune, almost  a billion dollars in total, that could have been used to help the poor and the vulnerable.

The way Harper and his Con artists tried to buy the election, with our money, was absolutely scandalous... 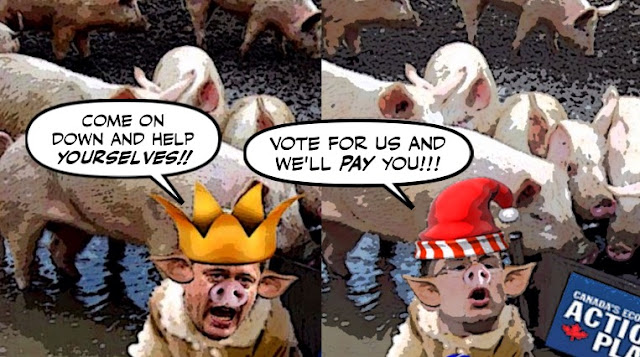 And the way they appealed to the greed of Canadians was absolutely disgusting... 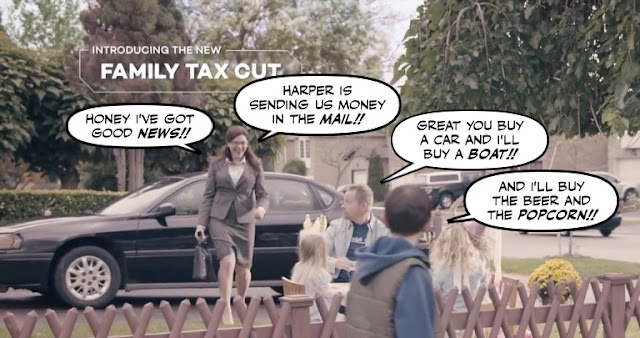 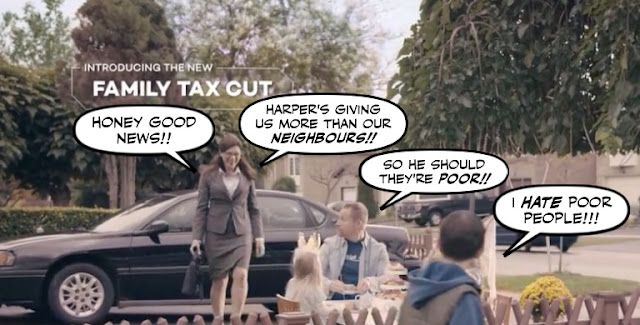 Until of course, the situation began to deteriorate... 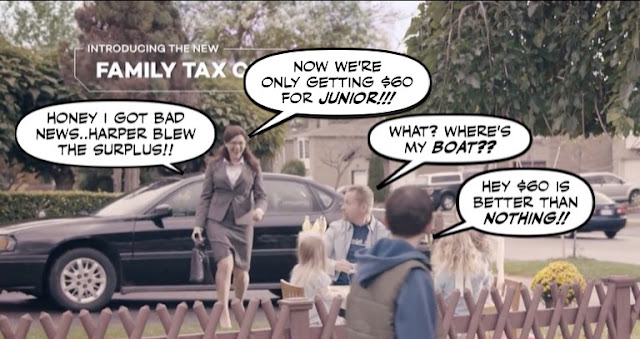 Or was overtaken by other events... 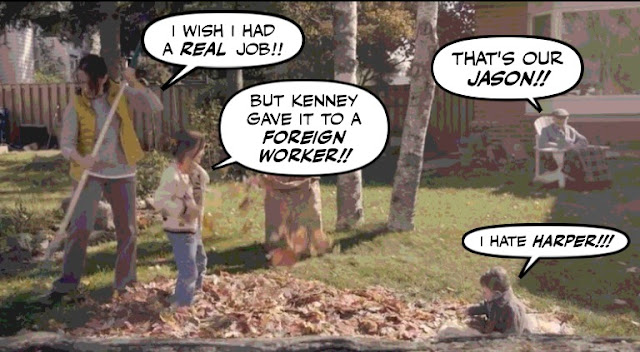 And there were no jobs... 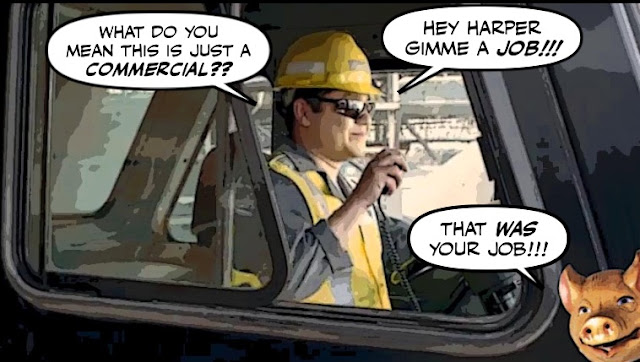 You know, I hope that the government keeps a copy of all those ads, so that they can be used when those Con artists are finally put on trial for fraud.

But just in case they don't, I'll be keeping a copy of this ad, the one that they were forced to pull off the air.

Because there was no program, and there were no jobs...


So at the very least the court can hear how they sounded.

The Porky Action Plan is finally done like dinner.

And so is this ghastly hog... 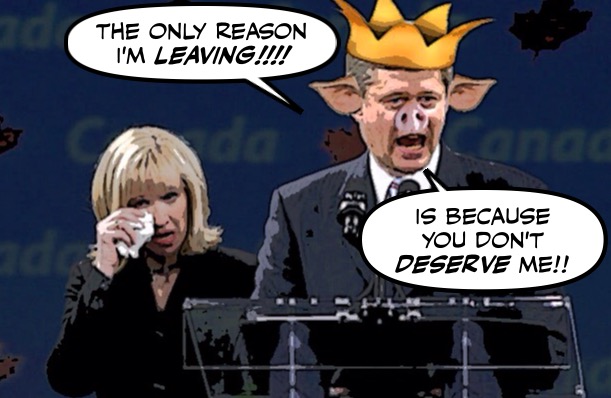 We still need jobs. And we need social housing, public transport and healthcare (including home care for frail seniors and people with chronic conditions). So, how to get these?

Let's push now for a FULL investigation and audit of how those tens of billions have been spent over the last decade. Was the Economic Action Plan Harper's version of the Sponsorship Scandal? How many people received public funds only to funnel them back into campaign pledges and other non-financial support? Was Harper just redirecting Canadian taxes into the hands of the 1% and the media only to be paid off with glowing support, endorsements and soft-on-Harper-crimes reporting?

A FULL, kick-them-when-they're-down audit needs to happen to prove to all of Canada just how vile and disgusting the Conservatives were while in power.

If we don't do this, there will always be a grain of doubt with the 'old stock Canadians' that hate the future and who will return in 2019 like zombies seeking out living progressive flesh. How's that for a nightmare?

Would really like to see the total amount the Cons spent on porky advertising and lobbying for big oil around the world. The Bruce Carson boondoggle was around 40 million which is likely only a drop in the bucket compared to Keystone and other lobbying activities in Europe and beyond.
RT

A billion on the inaction plan Con-promoting ads, a billion+ for Stevie's G20 coming out party. It makes the sponsorship scandal look pretty tame. Our new PM needs to change the rules to end the use of taxpayer dollars to promote government programs via TV ads. It can be done at a fraction of the cost by using social media.
Among Harper's many abuses of power, he thoroughly abused this to his benefit while giving taxpayers the finger. Well, so long Porky ads and so long Stevie, I salute you both with both middle fingers, Doo, Doo Doo Doo.
JD

True but at least the Libs don't seem to hate the poor or despise any government initiative that does not imprison or deport people so things may be looking up.

Trudeau's deficit spending policy seems to hint at some of this.

A bit OT but did anyone hear CBC reporting on Trudeau's visit to Foreign Affairs? Apparently there were cheers and applause as he arrived in the lobby. Not the usual groupies, but normally staid civil servants.

I think this shows the relief the Public Service feels.

The ads are finally gone? You promise. I can turn the t.v. back on. Thankfully those ads are gone. turned off the t.v. every time I saw them. What a waste of money. How many towns in Canada could have been provided with clean water plants with the money Harper wasted on ads and the jobs that would have created?

I've never been bothered by taxes until I saw Harper and his Cons waste my money on their ads. Pissed me off no end. Now t.v. will be a much better place, even if there aren't that many shows to watch. T.V. IS ONCE A GAIN A HARPER FREE ZONE!

The TV networks more than likely enjoyed the ad revenue from these annoying Inaction Plan ads.

Possibly one reason why they're all over the new Canadian Gov as they're not happy about the loss of revenue.

"Let's push now for a FULL investigation and audit of how those tens of billions have been spent over the last decade. Was the Economic Action Plan Harper's version of the Sponsorship Scandal? "

I'm still waiting for the Party of One documentary. And now that Harper has been relegated to a lowly MP, will any of the TV networks have the courage to do an in-depth 3 or 4 hour documentary on Harper's decade of darkness? eg. for The Fifth Estate, 16X9 (Global TV), W5, etc.

"Party of One" debuted at number one on the Maclean's bestseller's list and sold nearly 17,000 copies in the first eight weeks. Harris told me he recently negotiated the movie rights and was surprised anyone would want to make a movie based on a book about Stephen Harper. The book is a real page-turner and there were times I had to remind myself this is fact, not fiction. It is not partisan propaganda. It is well-researched, serious journalism.

hi anon...If it was up to me there would be an investigation tomorrow. I simply can't believe that a government could spend almost a billion dollars on the most grotesque and dishonest propaganda and get away with it. But I sense that many Canadians just want to move on so I am not optimistic that we will see justice done. But that it was outrageous and scandalous cannot be denied...

hi RT...at the very least I hope the new government has a small army of auditors go through the books. I haven't the slightest doubt that if they do they will find all kinds of irregularities, and from that might spring the public inquiry I dream about. We were too complacent by letting the Cons rule for so long, and we should not repeat the same mistake now....

hi JD....I believe Justin Trudeau has said his government will have a new approach to government ads, so I'm hopeful we won't have to live through another brainwashing exercise like the one the Cons inflicted upon us for so many years. For it wasn't just outrageously unethical, it was frankly bizarre, and more worthy of a place like North Korea...

hi jrkrideau...I think the relief of those civil servants just mirrors the relief and joy of millions of other Canadians all over the country...

hi e.a.f...I have been in a sports bar when one of those porky ads came on and I was gratified to see how many boos it elicited. Polls clearly showed that Canadians were not impressed with them, so in the end all those gazillions of dollars they spent almost certainly did the Cons more harm than good...