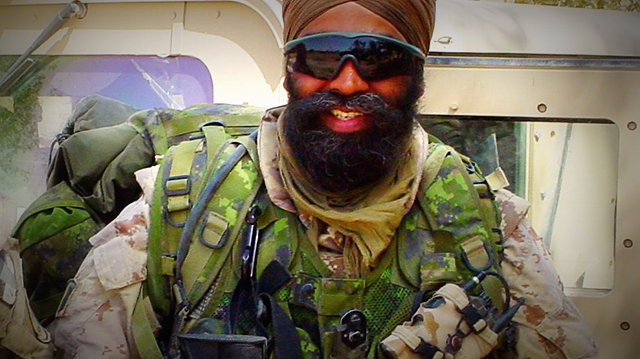 As you know, I think Justin Trudeau's decision to make Harjit Sajjan Canada's defence minister was an inspired choice.

Firstly, because it sends out a powerful message of real diversity and inclusion.

And secondly, because no Con is ever going to accuse him of being soft on terrorism. Not after this letter from the coalition commander in Afghanistan.

Sajjan was considered “the best single Canadian intelligence asset in [war] theater” whose "hard work, personal bravery and dogged determination undoubtedly saved a multitude of Coalition lives," according to the letter, recently obtained by National Observer.

Which as I have pointed out, can only make us feel safer than Jason Kenney ever did, with his grotesque War on the Niqab... 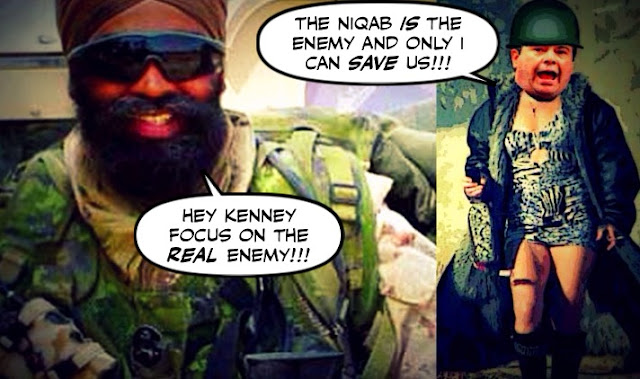 So you can imagine how I feel about this bigot story.

The Canadian Armed Forces is investigating racist comments about newly appointed Defence Minister Harjit Sajjan made by a soldier on Facebook. The military declined to identify the soldier or precisely what was written but a source said the non-commissioned member, a Quebecer, made an “inappropriate statement” about Mr. Sajjan’s “ethnic background.”

And while I'm happy the military is making all the right noises.

“Racist attitudes are not compatible with military ethos and with effective military service. Any conduct that reflects such attitudes will not be tolerated... As previously stated by Chief of the Defence Staff Jonathan Vance, bullies have no place in the organization.”

I think the generals need to do more than that, and give the bigot the boot.

Expose him, publicly humiliate him, and use him as an example to others.

Not just because we need to take back our army, whose reputation has already been soiled by reports of rampant sexism.

But also because we need to start taking our country back, from the depravity of the Harper regime.

Who used bigotry as a weapon for crass political purposes... 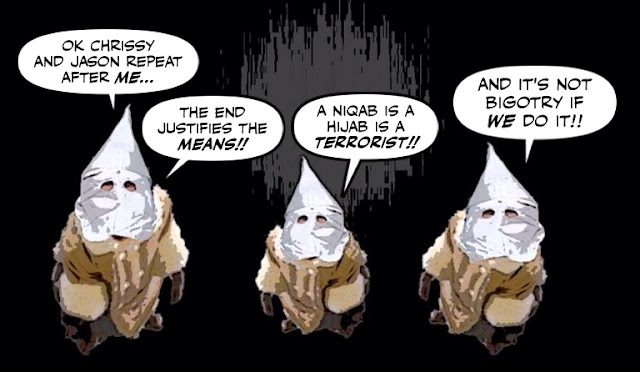 And infected this country with an epidemic of racism, that sickened many Canadians, and shamed us in the eyes of the world.

So now that the Cons finally have been defeated, we do need to send out this salutary message:

This country is under new management.

It's now called Canada not Harperland.

The night of the bigot is over. 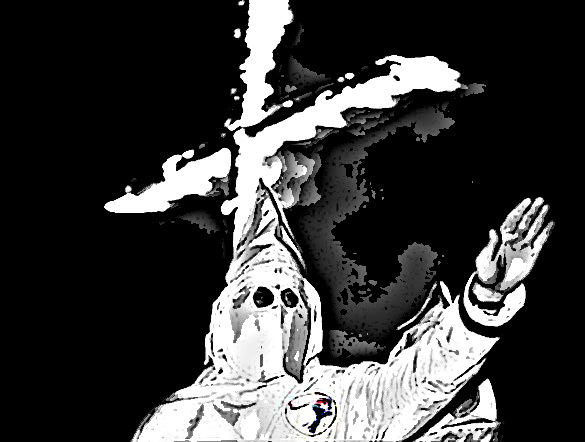 Given the nasty level of sexism in the military, it is not surprising to run into some racists as well.

I would not go so far as to boot the idiot who made the remarks but a few months cleaning latrines with a toothbrush and a reduction to probationary, provisional private 10th class sounds good. If necessary the military could create the new rank perhaps?

BTW I liked the Sajjan quote in one of the articles:

"When you're the government or minister," he said, "you don't work alone. We have a tremendous civil service and military who are exceptionally capable. In National Defence, we work as a team."

A conventional enough statement but when was the last time one heard a Con minister praising the civil service? Pehaps during Mulroney's tenure?

No wonder Trudeau was mobbed at Fort Pearson. A government that does not automatically assume every civil servant is an enemy.

I suspect racism, etc. is endemic in the Canadian Armed Forces - especially among front line soldiers. It almost has to be. You have to really hate "the other guy" to effectively kill him. Consequently, I suspect the "best" soldiers make some of the worst civilians.

Solution? I really don't know. However, such forces personnel would do well to avoid social media.

Classism,racism,sexism...they all point to the mostly badly-educated 'volunteers' who make up the bulk of combat-type forces..it is the same in every army in every country. I've read some real horror stories about the Russian Army and what they (used to) do to recruits..
Perhaps some training in these areas as well as Canada's version of 'boot camp' would not go amiss..

I feel that the tone set by Harper ("rah, rah, rah we must kill the enemy - we are a warrior nation") probably didn't help matters nor the change from 'peace keeping' to 'peace making under our jackboots and machine guns'.

I would also like the new government and the Minister of Defence in particular to rectify the miscarriage of justice as best described by the widow of Major Paeta Hess von Kruedener who was killed along with 3 other UN Peacekeeper when the IDF bombed a UN Patrol Base in southern Lebanon in July 2006:

I remember having read the Major's blog where he reported dispatches from that front prior to the attack on Lebanon. I also remember being ashamed that the Harper government took no time to publicly condemn his killing or to even honour the loss of this experienced and respected member of the armed forces. Harper did not shed one crocodile tear as he had become accustomed to doing for all his warrior soldiers who came home from Afghanistan in body bags.

There are racist bigots in our military?! I don't believe it.

Especially if we have funny twats like Steve living here in the first place :)

hi Steve...if we didn't let people with funny hats into this country there would be nobody living here. We all wear funny hats. The other day I had been wandering around downtown proudly wearing my new cool tuque. When I saw myself in a shop window and was shocked to see it was standing up on my head like a chef's hat !!!!! But seriously I think turbans and uniforms go very nicely together, send a really good message, and look cool too...

hi jrkrideau...I don't really care what happens to that bigot, but he should be punished, and the military should make an example out of him to send a message to all in the Canadian Forces, and other Canadians.
Racism had been allowed to run wild, and after what the Cons did during the campaign, I do think we need to make a strong statement...

hi anon...yes me too. The military has been given new marching orders in that regard by it's new commander General Vance, so I'm hoping the sexists in the ranks finally get the message...

hi UU4077....I don't know if racism is rampant, but the military has the obligation to make sure that any racists are punished. The Canadian Forces are supposed to represent and defend our values, so they can start right here at home...

hi mizdarlin....yes no doubt that is true, as it is in the civilian population. But I also know that the military does also attract some very idealistic and decent men and women. So it's up to the brass to crack down on any offenders, and educate the others...

hi Omar...as I told mizdarlin, there may be some bigots in the military, but none of the soldiers I know through Seb are like that. Perhaps a little rowdy, but not racists. And if there is a racism problem then just like the sexism problem it must be ruthlessly crushed....

"giving him the boot" maybe in order, but only after a fair and open hearing. this is still Canada and everyone has the right to a fair and empartial hearing regardless of their "crimes".

To humiliate him is just not on. It is a form of bullying. What ever the reason for "bullying" a person, it is not on. It is not acceptable, because if we bully one person, regardless of how offensive they are, we start the slippery slope. It is not up to us to judge who is humiliated/bullied.

People who make racist, sexist, etc. comments while in the employment of the federal government, ought to be "charged' under their terms of employment and then dealt with in an appropriate manner. If we do not treat "the enemy" in an equitable manner, we are no better than them.

Simon, you ought to care "what happens to that bigot". Regardless of what he has done, he is a human being and ought to be afforded the same rights as all human beings. We don't know what led him to make those statements. We don't even know if he is white/caucasion. He might have been drunk when he wrote what he did.
It would be better if this were made a "teaching" opportunity, to convey to people that there is a human way, a nice way, and that each person ought to be "judged" on their abilities and fairly. Did anyone think this solider might be suffering from PTSD. People with PTSD some times say and do inappropriate ways.

Trudeau was "mobbed at fort Pearson" not because he would humiliate people but because he would treat every one well. A great e.g. of this is he gave Harper the use of the government jet to fly home to Calgary. That says more about Trudeau than any words could. It is what the people at "Fort Pearson" see in him and why the turn out/