Rick Mercer and the Refugee Lifeline 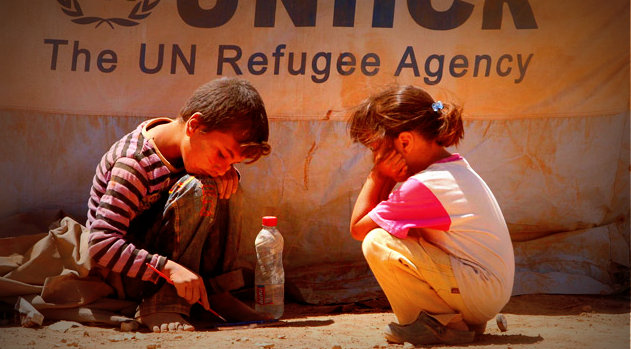 As you know, I believe the challenge of settling thousands of Syrian refugees in this country is a gift not a burden.

A chance to show that after the darkness of the Harper years, we still remember what it means to be a Canadian.

I'm glad Justin Trudeau has decided to give us two more months to get ready to receive them.

Prime Minister Justin Trudeau says his government won't fulfil its campaign pledge to bring 25,000 refugees to Canada by the end of the year, but justified the delay by saying it is more important to "make sure it's done right."

Because if this is to be our moment to show who we are, that's ALL that counts.

Not the fears of the population who believe that the refugees are a terrorist threat, when CSIS and the RCMP say they're not.

Not the cheap politics of Michelle Rempel... 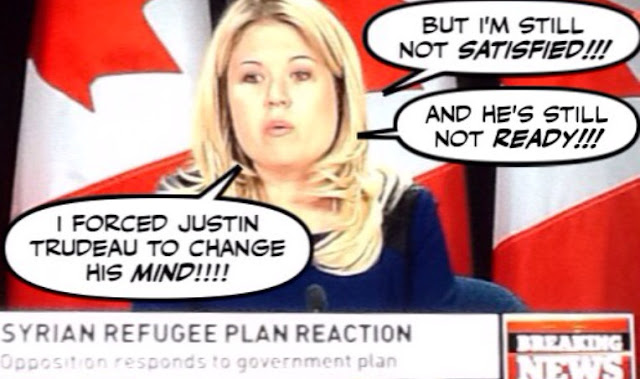 Who is sounding crazier every day, after having helped stir up those fears, and having served her depraved bigot master Stephen Harper so faithfully for so long.

What counts is making sure that we are ready to receive those new Canadians. So we can really be an example to the rest of the world.

The United Nations High Commission for Refugees is praising Canada on its plan to resettle 25,000 Syrian refugees, even going so far as to say that other countries should follow suit.

And above all making sure that we are prepared to deal with what will be a formidable challenge. For these are refugees not immigrants... 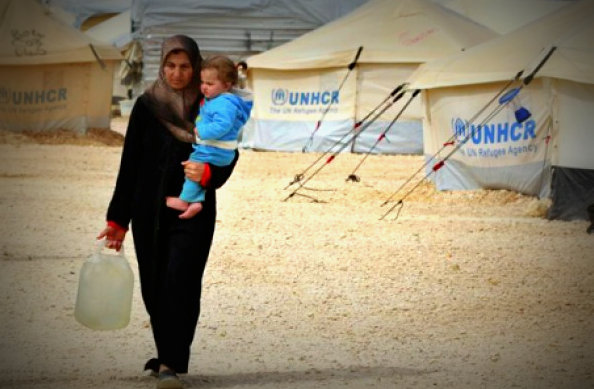 The ones coming to us from the UN camps are the poorest of the poor, most of them have lost everything they owned, and many of them are traumatized.

Refugee children and adults around the world are plagued by high rates of post-traumatic stress disorder, say Canadian mental health experts who hope more resources will be offered to Syrian newcomers.

So we will have to heal them, and support them, as well as embrace them, if they are to be happy in their new home.

For how horrible it would be if they came to believe that they had just exchanged one sad and lonely place for another... 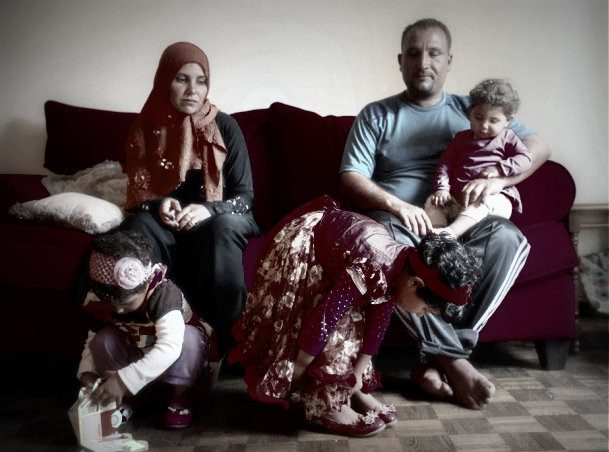 But the good news is a lot of people all over the country are preparing to welcome them with open arms.

Those who feel we are being invaded should get a reality check.

Here’s another number: 36,634 — the number of people expected to attend the Grey Cup game this weekend. Yes, if you put all of the incoming Syrian refugees — including children — into seats at Investors Group Field in Winnipeg, you would still have room for 11,000 frozen and crazed football fans to show the newcomers how Canadians have fun.

Or in the case of Michelle Rempel a morality check.

And as Rick Mercer suggests, everyone should stop yapping about deadlines.

And just throw those poor, desperate people a lifeline...

Yup. After so many years of darkness it is our shining moment to show the world and ourselves what it means to be Canadian.

They are counting on the kindness of strangers so we cannot disappoint them. Or let others hurt them.

But should instead be telling our newest Canadians as they start arriving at airports all over the country, with almost nothing but the clothes they are wearing.

Thank you for the precious gifts you are bringing us this holiday season.

And welcome to Canada!!!! As a collective cleanse, we need ignore those nasty people (Michelle Rempel et al.). All they have left is their filthy little mouths.

The United Nations High Commission for Refugees is praising Canada

Some people at the UN and other places must feel a bit like Alice when she fell down the rabbit hole. "Canada is doing what"???

I agree with you that it's a good thing that Canada is taking more time to bring the Syrian refugees. I am sure it would have been possible to do it by Jan 1 but a more phased approach gives all sorts of government bodies, ngos and other groups time to get better organized and get resources and staff in place.

It's nice to see that Trudeau and his cabinet are flexible enough to do the sensible thing rather than stick to a promise that they could have reached but without sufficient infrastruture in place to do the job properly.

Saw Mercer's show when he did his "rant". It was excellent. It really puts things in perspective. We did take 60K Vietnamese refugees in 1979 and look how well that turned out.

Glad to see Trudeau is flexible and is willing to listen to advisors as to what is best for all concerned. I'm happy that Canada is taking 25k refugees. We ought to all be proud of our country. Now let the rest of them do the same.

On the talk shows, some of the Con MPs act like they still have their majority!

Earth to Cons: "You lost the election. You don't get to get to make the decisions anymore."

Without disrespect to any of us, bombings have never ended an Islamic or any religious extremist terrorist threat. Time after time it has made matters worse. Let us try to look to the lessons of history before we go to war again.

hi anon....I honestly wish I could forget people like Rempel. But she is becoming a player and she is very hard to ignore. So I'm afraid I'm going to keep after her and the other surviving Cons until they finally go down the drain....

hi David....yes I agree, the Cons don't seem to have got the message that they lost the election. And are demanding things like more transparency from the Liberals even though they ran the most closed government in Canadian history. And let's not forget Lisa Raitt who is trying to blame the Liberals for Joe Oliver's missing surplus. And as for James Bezan, if he feels so strongly about the Great War on Terror or Russia he should go ahead and enlist....

hi jrkrideau....yes I'm happy that we have a bit more time so we can be ready to receive the refugees. I saw another report on their health yesterday, and with so many traumatized children we're going to have our hands full making sure that they get the right treatment. The pathetic part is that the Cons and the corporate media who were urging the Liberals to slow down the process are now going around accusing them of breaking their promises. As we say in Quebec, more Con than that and you die...

hi e.a.f....yes the numbers are no big deal, when we process 250,000 immigrants a year. But I am proud of our country for setting an example, and if we have to stretch the process out a tiny bit to make sure we can do a good job of receiving that's fine with me.
And let's not forget if the Cons were still in power, those refugees wouldn't stand a chance...

If the Cons were still in power, they would continue to drag out the refugee process, and it would be doubtful the Cons would honour their promise to bring in 10,000 Syrian refugees over the next 3 years. Maybe 1000 refugees over 30 years! 8-)

This year, Canadians should cut down on Christmas presents for their families and friends, and instead say "I have donated X dollars in your name towards sponsoring a Syrian family in your province/territory."