Could Stephen Harper Be Forced To Testify At the Duffy Trial? 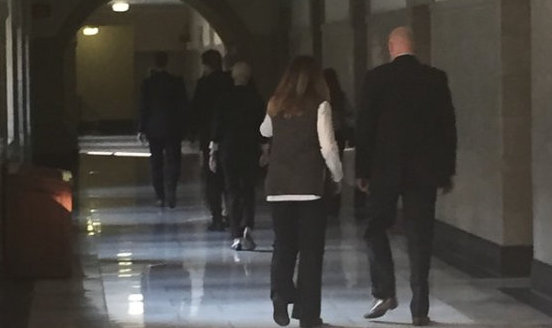 When we last saw Stephen Harper he was running or waddling quickly down a corridor, in a desperate attempt to escape the media.

Or as portrayed in this Le Devoir cartoon, crawling out the back window for the same reason... 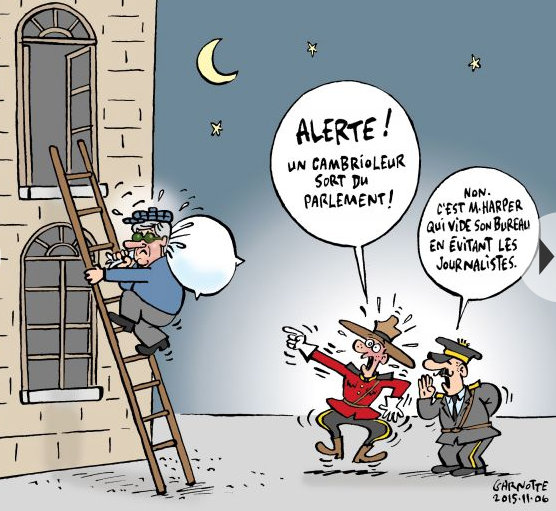 But according to some parliamentary experts, he could soon be running for his political life.

Should Mike Duffy decide to summon him to his upcoming trial, and he can't use his parliamentary immunity. 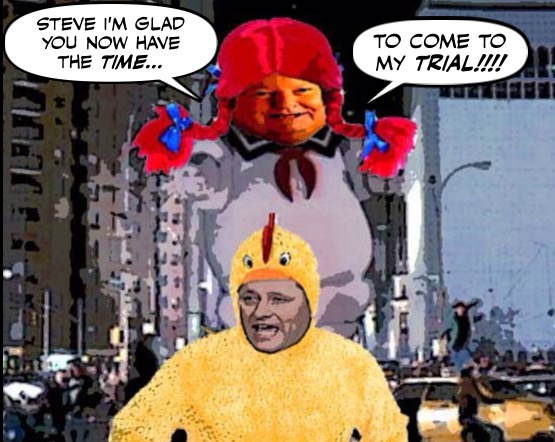 Former Prime Minister Stephen Harper and Conservative senators may have difficulty invoking parliament privilege should they be called to testify at Senator Mike Duffy’s trial, say some of Canada’s top experts in parliamentary procedure.

And of course neither would the Liberal government... 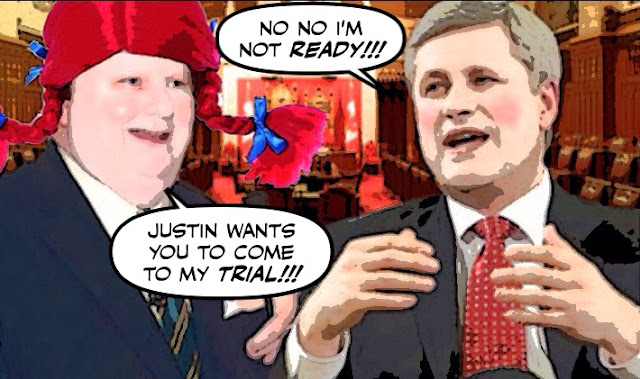 “In this particular case, it would be a pretty cold day in July before a Liberal dominated House insisted on the privilege for the purpose of preventing Mr. Harper from testifying in the Duffy case. It just wouldn’t happen, I would think.”

Now I should say at this point that Justin Trudeau has raised my expectations so high I dare not raise them any higher without an oxygen mask.

But I do note that the trial, which resumes in just six days, is supposed to last for another five weeks, so anything could happen.

And wouldn't it be great if Harper was called to testify? For whether he actually got to sit in the box or not, it would be a frightful scandal.

Or the final humiliation... 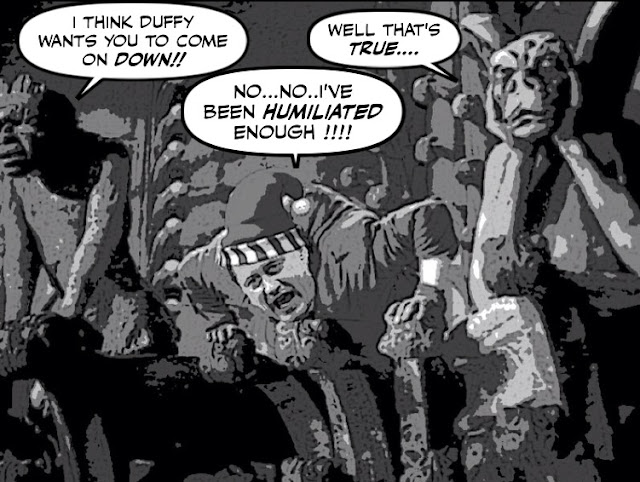 Or with a little luck, the end of this sordid story... 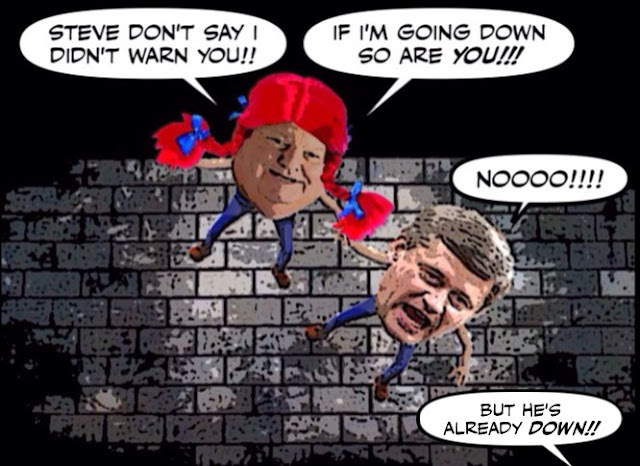 You know, I have to admit it, I'm BAAAAAAAAD.

Or maybe I just want justice more than most, or have a longer memory.

But I don't want to see Stephen Harper and his Cons merely defeated.

For what they did to our Canada, I want to see them destroyed...

Just the thought that he must lie awake worrying if Bayne is going to ask him to testify makes my day, Simon. Especially now that it seems there is no guarantee he can escape by claiming parliamentary privilege.

Sure, he will likely lie even under oath, but he has to worry that they may be something in someone's testimony, or some overlooked e-mail or document, that just might produce the evidence that he was lying under oath.

As it is, Tenycke had already stated in public that it was inconceivable that Novak would not have told Harper if Novak had known about the payment. And Ben Perrin, albeit contradicted by Wright, had testified under oath that Novak did know because he was in the room.

I believe Ray Novak is on the witness list when the trial resumes. While I do not expect him to admit that he knew, however, who knows if he might suddenly worry about his own skin and decide to admit that he knew? After all, few people had expected Perrin, Harper's own legal counsel, to so strongly contradict Wright's testimony.

"Robin" Novak has to wonder if he can afford not to tell the truth about Batman now that Batman can no longer protect him, eh?

I have heard it suggested, Simon, that the Duffy trial could end with a giant fizzle when it resumes. The defence, as I hear it, may intend on calling Margery LeBreton, Dave Tkachuk, Stewart-Olsen, Gerstein and Arthur Hamilton. No word yet on whether Don Bayne intends to subpoena Harper and Ray Novak but I think the evidentiary foundation for that has been established by Nigel Wright and, especially, Benjamin Perrin.

At this point a bare acquittal might not be enough for the Cavendish Cottager. As Geoffrey Stevens noted in a recent column there are two trials underway - one of them is a criminal prosecution, the other a political persecution that was intended from the outset to take Stephen Harper off the hook.

Look at it this way. The political aspect comes through in the "immaculate bribery" charge. Wright's money was a bribe in Duffy's hands but Wright is somehow blameless for proffering it. I'm told it was widely known in Ottawa Conservative circles that Wright had warned if he was charged, he wasn't going down alone. Through the evidence so far we know there was an extensive cast of prominent PMO players in on the deal and, collectively, they point the finger at Harper. When the Paulson RCMP took Wright off the hook, that took everyone else off the hook, Harper included. That is what set the political persecution in motion.

When Wright gave evidence he fudged on the Novak issue, saying that Novak might have been out of the meeting at which the under the table cash deal was discussed. That strikes me as Wright's payback for being exonerated by the RCMP. Perrin's evidence utterly destroys Wright's feeble explanation. Perrin was clear that when Wright dropped the bombshell he immediately looked at Novak, expecting to see an expression of surprise, but there was no surprise on Novak's face. I'm told this is a very clever, experienced judge. I can't imagine he would take Wright's account over Perrin's on the Novak issue, another powerful reason to subpoena Novak and Harper.

If, as has been suggested, the Crown tries to walk away from the prosecution, it will be an admission that this was a political setup from the start. Yet that may be inevitable. What has been discovered since Duffy was charged is that, on the charges that might stick - i.e. the expense account stuff, probably half of the Senate is as guilty as Duffy ever was. You convict Duffy you had better be prepared to prosecute the others or admit that the whole thing was a setup.

I think the Tory Senate leadership isn't very happy at how this has spun out. That may be behind their recent promise not to meddle in legislation Trudeau sends to the upper house. They're in no mood for scrapping at the moment.

As much as I love the idea of Harper testifying, I don't believe he ever will even if he is called. He will simply refuse, and he has the money and connections now to tie up any court for years. He is a lying scumbag to the very last and any such process would just further our image of what Harper really is. Even then I would still enjoy seeing him continually trying to use the court, an institution that he so loathes, to protect him from his long trail of lying.

I think this has to be seen in context of Senate reform. JT needs to dangle this issue in front of all of the swine that Harper appointed to show that they will be next. If he doesn't play the game right, they will crush any initiative he takes, ultimately putting him in a spot where he has to take the blame for someone else's land mines.

In other words, he has to appeal to their lowest common denominator self interest to ensure that he can get something done in Parliament. If he doesn't, they'll block him at every turn.

The ghosts of Stephen Harper will haunt JT for some time. He needs to steel himself for what is coming down the pipeline.

Being an active force in leaving Harper out to dry AND throwing Duffy behind bars would be a very good first step.

Oh what a tangled web we weave
When first we practice to deceive. - Sir Walter Scott (Marmion, 1808)

Yeah? Take a look at the bullshit still being spewed about the 911 false flag operation staged by the u.s. to start the p.w.o.t. for the fucking 1% total takeover of their/our governments and then say that crappy verse out loud to anybody who isn't half brain-dead and see if they don't laugh you right out of that neighborhood.

Well, I guess you missed the point, Anonymous. The humour/irony.

It would seem Harper and Wright (both far-right Christians) DID NOT WANT the truth to come out re: what Harper knew, and when he knew it, concerning the $90,000 payment to Duffy.

No matter what happens in the end, I have always said that if Mr.Harper did not know, then he should have known! Either way, Canadians deserve 'nothing but the truth'.

hi anon....yes the suspense must be killing Harper. For whether he is called to testify or not, others will be called to describe what they knew or did, and his precious PMO is not going to come off looking very pretty. And of course if his precious Robin is grilled who knows what he might say. We may not need the Duffy trial any longer to bring down Harper, but any further damage to his reputation will be most appreciated....;)

hi Mound.... I've heard something similar. As in don't raise your expectations. But as you point out so well, there are a number of trip wires now in place that weren't there in the beginning, and Perrin's testimony was a mighty blow, which Bayne could exploit in any number of ways. As I said above, we don't need Duffy to help bring down Harper any longer, but just to see Ray Novak and the bagman Gerstein testify would be worth the price of admission... ;)

hi Kirby...that may be true, even in his shrunken condition Harper might be able to fend off any attempts to call him to testify. But at this point I just see the trial as a way to tarnish his legacy even further, if that's possible, and use the goings on in the PMO to try to discredit Ambrose and her Con band. But yes it would be ironic if Harper was forced to use our legal system to protect himself after having abused it so badly. Six bags of popcorn please... ;)

hi anon...I hadn't thought of that, but yes if the Con Senators can be discredited further, it would make it harder for them to block Liberal legislation, and hopefully one day lead to the abolition of the Senate, or its total and absolute reform...

hi David...yes they have woven quite a web, and it would be great to see them get tangled up in it....

hi Kathleen...I haven't the slightest doubt that Harper knew exactly what was going on in his office. How could a control freak like that not know? And as others have pointed out, now that Harper is no longer Prime Minister it just might make it easier for the truth to emerge...

In my opinion, it will be doubtful if Harper will be forced to testify. If he is "called' he may "appeal" through the court system. That could take a long time.

Even if he sits in the witness box, he may simply invoke his right not to "incrminiate" himself.

The damage is done. The Cons are no longer the government. this case will stick to them for decades and Duffy, ought not to have been charged to begin with, given how loose the game rules are. don't like what he did, but he and Wallin, most likely were assured their lifestyles would not change when they became senators.

The upside of all of this is the Senate and how it works and who gets anointed, is now a point of discussion in Canada

Donald Bayne sounded like he really regretted the trial being postponed, he said it was "about justice being done". And he is a very determined lawyer.