Stephen Harper and the Damage of Dimitri 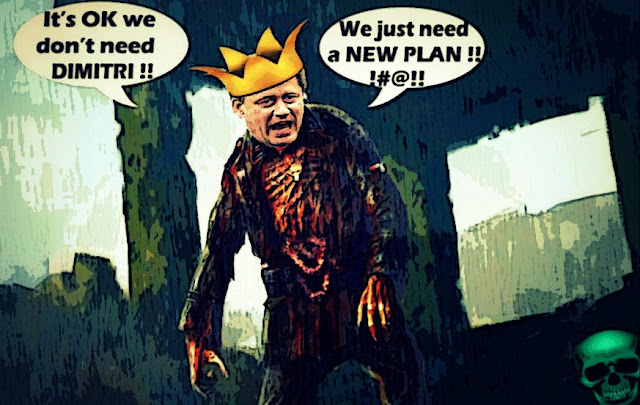 Well as you probably know, I don't just question Stephen Harper's judgement, I question his mental state, and study it extensively.

Because better safe than sorry eh?

And in that regard, for a moment today, I thought that the shock of his faithful Dimitri's sudden departure had driven him over the edge.

For what else could explain that after tweeting this the other day...


To appeal to those in his rabid base who believe that judges side with criminals to screw victims AND the Cons.

He should appear today in the Commons smiling sunnily, claiming he was surprised by the rejection of his Supreme Court candidate.

Prime Minister Stephen Harper says he’s surprised to learn that Quebec has different rules when it comes to appointing judges to the Supreme Court of Canada.

Justice Minister Peter MacKay, in explaining his boss’ reaction, described the regulations as “new.” The rules have been in effect since 1875, although MacKay denies that and says it was an interpretation by the Supreme Court.

And sounding so reasonable, if laughably ignorant.

And then, as I pointed out in my last post, there was Pierre Poilievre also sounding almost reasonable.

Or this unprecedented offer to cooperate with the opposition.

And it all sounds like Harper has decided that his take no prisoners approach isn't working and he needs a new plan. 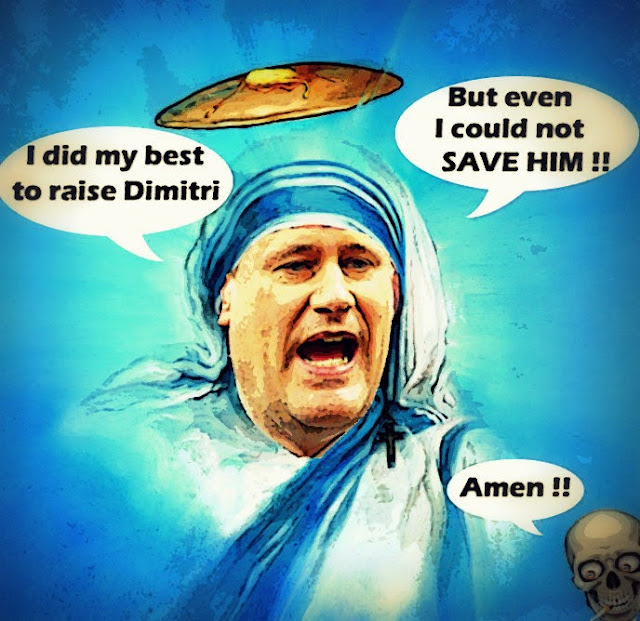 But then he really has no choice eh?

Because the Dimitri debacle coming on top of all those other scandals has done him incredible damage.

Not only has it made his judgement look absolutely appalling. Again. The idiot leader who appoints one dud after the other

But it has also shone a light at the culture of corruption he has created. The one that Dimitri, who says Harper is like a father to him, was raised in by Big Daddy.

Dimitri Soudas lost his job for being the heavy for the wrong person. He was for years a loyal operative for Prime Minister Stephen Harper, willing to get tough with journalists, MPs, and party officials, to fire blasts of venom and throw his weight around. It’s when he started doing such things for his fiancée, Conservative MP Eve Adams, that he had to go.

Because Big Daddy likes them that way... 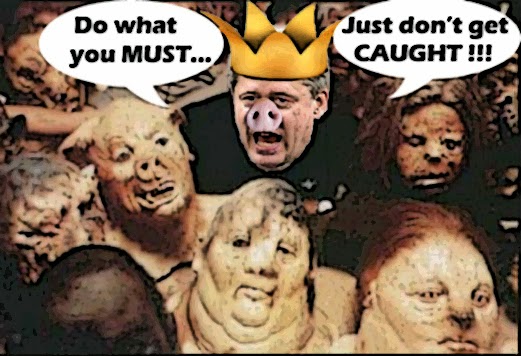 But now that climate of corruption is coming home to bite him. The Big Blue Machine is blowing smoke out of every orifice.

Few expected this. The bet would have been that the Prime Minister would have gone to the wall to protect Dimitri Soudas, as he has many other loyalists after acts of folly. But just four months after having been appointed, the Conservative Party’s executive director is out the door. He joins a lengthening list.

What’s often been reputed to be a well-oiled machine has seldom been in such a state of disarray.

And his greasy grip on the party is slipping.

What seems clear is that the party is not prepared to kowtow to Mr. Harper the way it once did. He doesn’t exert the dominance he once did. His party has been trailing the Liberals in the polls. He presided over a scandal he claimed to know little about, but should have known a lot about. Rebellious caucus types have confronted him, demanding some freedom of speech.

So he does need a new plan. And it does seem that the push is on to try to portray him as Great Nice Leader again.

At least judging by this photo he tweeted out today... 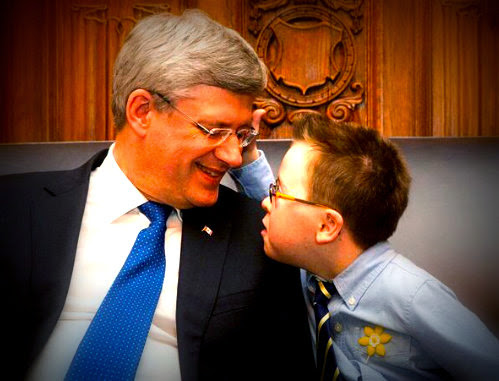 But sadly for him it just won't work.

After all the things he's done nobody will believe that he is a nice guy. Not the Great Corrupter. Most Canadians wouldn't trust him as far as they can spit.

And who I wonder is going to get the Con attack dog hog Jenni Byrne to change her ways?

And sure enough I was watching TV today, and there was one of those smarmy Con attack ads accusing Justin Trudeau of lacking judgement.

Unlike The Great Corrupter.

Yup. He turned this country into a moral swamp.

He turned his government into a toilet.

The corruption bubbled out of him.

And he ended up where he belonged... 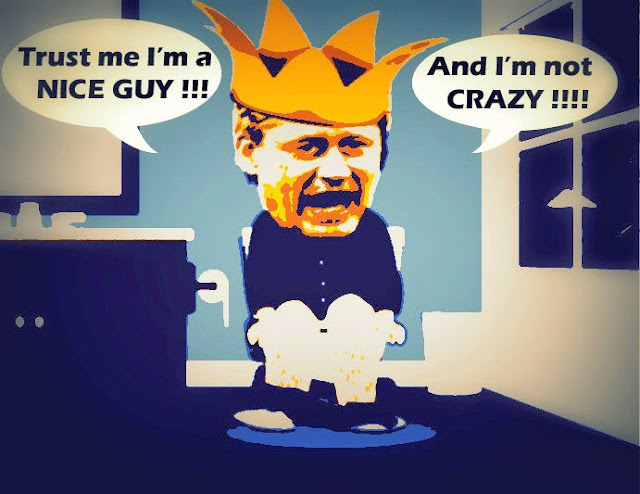 Never forget he has turned Canada into an 18th century economy.

Ooh, look Simon, there is bee...eeg trouble in Paradise.

"Big Daddy" has apparently now asked "Big Contempt Party" to probe into "Dear Daddy's Son's" GF's access to CIMS. Also, it seems that it was the same lawyer, Hamilton, involved in the Guergis-Jaffer case, that had apparently caused Dear Daddy's Son to now become Disgraced Son.

History seems to be repeating itself with all the elements of the Guergis-Jaffer in play. Big Daddy seems to be getting ready to throw Disgraced Son and his GF under the big blue bus, the way he had done with Guergis and Jaffer. Will Disgraced Son get angry and start a family fight with Big Daddy, just as Guergis did? Or will he acknowledge how much pain he had caused Big Daddy and become Disgraced Prodigal Son and be welcomed back? Tune in for the next episode of "Trouble in Con Paradise", eh?

BTW, something very interesting to note is that Disgraced Son's GF has now apparently suggested that she has access to CIMS. Didn't the court dismiss the Council of Canadian's case because, although it had concluded that the CIMS was likely used for the robocalls, it could not find evidence that it was done by someone in or related to the Cons Party? And the reason was that only a few people were supposed to have access to CIMS.Therefore, this new development seems very relevant: it seems to prove that there may be a lot of people who actually had access to CIMS, no?

Just when you think he could not possibly stoop any lower, now pretending he really cares about the less fortunate kids.
He is beyond redemption.

What else does Harper's fascist dictatorship government have to do, to be thrown out of this country or be thrown in the brig? Harper's list of degenerates is as long as a football field and that includes Poilievre, Harper's Himmler.

I just read of Obama and the NAU. Obamacare is another advance for the Nau Plan. This is what John Kerry has said. So, we have American Police operating in Canada, exempt from our laws. We have Obamacare. Harper encouraging Canadians to shop across the border. Flaherty was going to bring Canada's cost of living in line with the US cost of living. I think that was the last hurdle, for the merger of the 3 countries. Big business is pushing for the NAU. So, count on it. Read of Mexameracanada. The Amero dollar will be the currency. You can find info on the Amero dollar in Wikipedia. So, are we good to go?

From what I can gather? Harper insisted on Soudas, against the wishes of his team. Wasn't Bruce Carson influence peddling for his girlfriend as well? At what point will Harper run out of degenerates? Where in hell does Harper keep finding them? Not that it matters, Harper is rabid to stay in power. He will use every dirty tactic in the book, to cheat this next election too. The Soudas fiasco won't stop Harper for very long. Harper always shifts his blame onto others. Cuts their throats and throws them under his bus.

It was fun to watch Evan Soloman on CBC discuss this today and then have the Conservative Riding President be interviewed about the girl friend's actions at the meeting. Gee and that is what their friends are saying. Not good. As long as oil can keeps anointing people like D.S. he is headed out the door and the kid or Mulcair will be re decorating. The question is can the country survive until 2015? Perhaps the Conservative caucus could have a small revolt and oust oil can.

Didn't Andrew Prescott have to resign from his post in Eve Adams' Hill office once his name was tainted with the Pierre Poutine/robocall scandal?