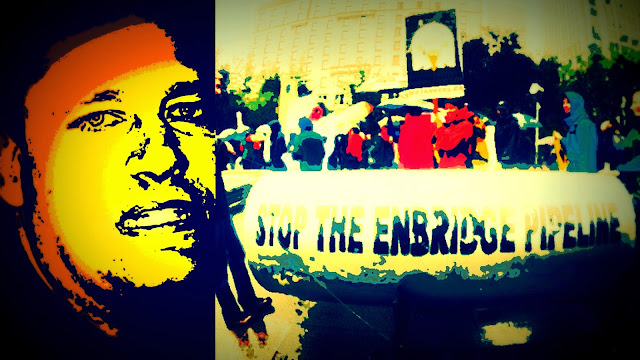 When historians assess the legacy of Stephen Harper fifty years from now, the many scandals of his corrupt regime will probably merit only a few paragraphs.

But what they will say of him without a doubt, is that at a critical point in human history he failed his country and his planet.

For at a time when scientists were warning that time was running out for climate change action.

The disconnect couldn't be greater.

In Canada, there is a huge disconnect between the level of action needed to dramatically reduce the risks of climate change and what is most politicians are proposing, says P.J. Partington, a senior analyst with the Pembina Institute, a think-tank that focuses on sustainable energy.

“We are seeing more ideas being put into practice at the local and the provincial level,” he says. “But at the federal level there is disconnect in terms of challenges and what is presented as a solution.” 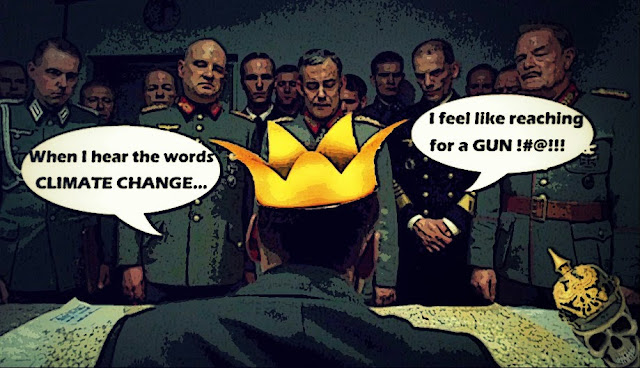 So thanks to our mad king and his depraved regime, not only is Canada failing to do its part to fight climate change. Even though the oil sands are now the single most destructive project in the world.

And the oil industry is now Canada's biggest source of greenhouse gas emissions.

It's also missing out on the jobs of the future.

Christian Holz, executive director of Climate Action Network Canada, said Canada needs to understand the report’s message. In a statement, Holz said this should be a stark reminder for Canadians that “the current path of the Harper government — to put all of our economic eggs in the tarsands basket — is not sustainable and that Canada is losing out on the benefits of a transition to a low-carbon economy.”

And all because Great Economist Buffoon leader couldn't put our larger interests before the interests of Big Oil... 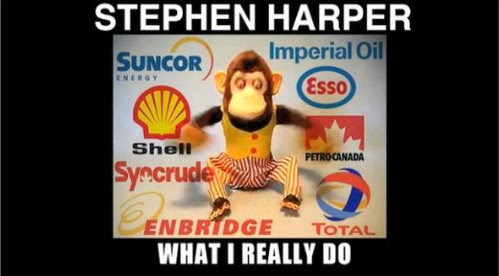 Because he was, is, and will always be, their stooge or their monkey.

And the fat cats were only interested in maximizing short term profits... 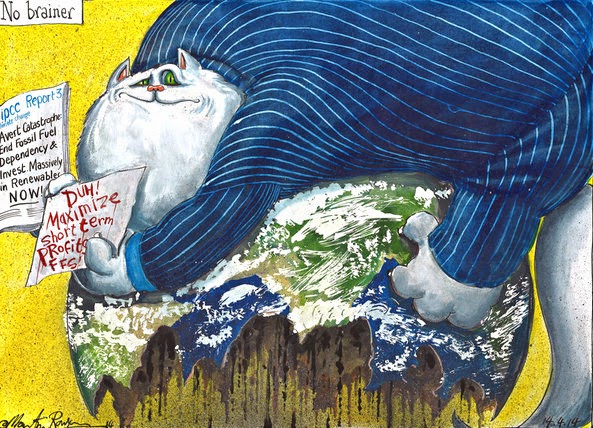 Because they WILL only be short term. The writing is now on the wall.

And unless the situation changes we will have to spend YEARS catching up to the rest of the world, while living in a country rendered obsolete by technological change.

Which would all be very depressing if it wasn't for this inspiring rebellion.

Because it shows that unlike those greedy fat cats, people are prepared to put the interests of their land and their planet before short term profits.

Their message to the Con regime and its Big Oil buddies couldn't be clearer:

"This vote is confirmation we are going to stand firm and say no to the influence of big oil," Lange said. "And coming from our community, a community that has everything to gain from this project, we still say no. We are sending that message throughout B.C. and to Ottawa."

This is what it sounded like when the vote was announced...

And that's the glorious sound of PEOPLE POWER.

That will both save our country, and our future.

Because one thing is for sure eh?

If Stephen Harper doesn't hear it now, he soon will.

The Canadian people are rebelling. Climate change and the jobs of the future will be a big issue in the next election. One more weapon in our arsenal.

The Con regime is running out of history. 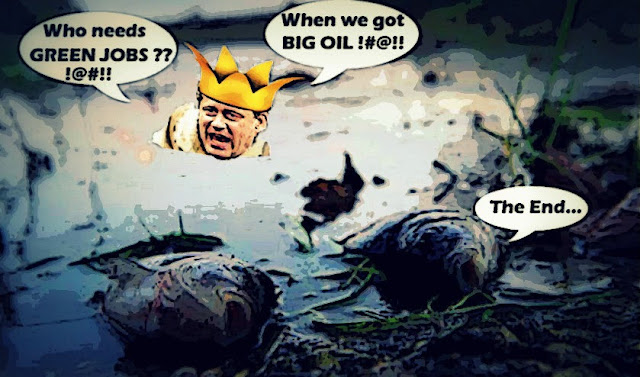 Our Dear Oily Leader can deny climate change all he wants but facts are facts. His obsession with the tarsands while we lose thousands of manufacturing jobs, which he ignores, is mismanagement at its worst. You'd think we'd have a booming surplus by now with all that liquid gold flowing but no we don't. The only reason the budget will be supposedly balanced next year is due to their continued slashing of the public service which POS Tony Clement seems to be really having fun with. Well Tony, you enjoy your gazebo while you can and rest assured that you've put in your 6 years of service and now qualify for a full pension you googly-eyed twit.

Let us not tiptoe around truth any longer. The Justin Liberals are as much in favour of any oil extraction as the Harper Cops. We in BC are sick to death of the Liberal Party and their underhanded support of the oil industry piping out to our coastline.
A win for the people here today. Another battle tomorrow.

Here in BC our own Provincial LIEberals (not to be too confused with Fed Liberals, another animal all together) are pulling the same crap..and so supportive of everything that Harper says or does that it's sickening..now they are trying to sneak in a new source of so-called 'clean' energy, natural gas in the North, with LNG as corporate 'partner in crime' and fracking? What's that...?
The problem in, it's unbelievable to most of us that they got elected, yet again, after all the lies and scandals of the past, and Kitimat's vote notwithstanding, they will continue to support the pipeline in their own weasel way with or without the consent of the people..
I'm just afraid that despite all this ugliness, Harper will manage to sleaze back in despite this groundswell of opposition to any and all of his plotting, due to the political amnesia seemingly common among Canadians come election time...

enbridge is already spinning this vote. of the 4 thousand eligible voters...3000 got out and spoke....not 1/6th like they claim. It was great,....and I so wish it was binding but at least the people did get to speak.

Imagine;people that can't be bribed.

hi anon...I completely agree, Harper is guilty of all four offences. (1) denying climate change (2) putting all our eggs in one oily basket. (3) creating a so-called Dutch Disease which killed good manufacturing jobs all over the country.(4) balancing the budget by slashing good government jobs instead of raising corporate taxes. And of course guilty of employing someone like Tony Clement who should have been relieved of his duties after he sprinkled OUR money all over Muskoka to buy votes. Now somebody please make me a judge... ;)

hi anon...I agree that the Liberal position on energy is inconsistent, although not as bad as the Harper Cons. But yeah it was a great victory in Kitimat because they put the interests of the land and the planet before their economic interests. Good for them and the struggle continues...

hi mizdarlin...when I first arrived in BC it had to be patiently explained to be that the Liberals were actually the Conservatives, and the Vancouver Sun was actually the most progressive MSM paper. But what I can say is after seeing the beauty of that province is that I understand why so many people want to protect it.
As for the collective amnesia of voters, I fear it too, but that's why we must work harder than ever before to wake up Canadians and get out the vote. And in that regard, although my readers might believe I should be called Sunny Simon, I think that I am on this occasion at least, optimistic for all the right reasons... ;)

hi deb...yes I saw that, but what else can Enbridge say? They will no doubt spend even more money on their fraudulent ads, and offer to bribe any person in authority they can. And it still won't work. The vote may not be binding, but it does reflect the views of most people in BC so the Cons will have to pay attention or they could lose the province, and all their oily dreams will go up in smoke. I never did visit Kitimat during my time in BC, but I did fly over it several times in a small plane. And if I did that again I would lean out of the cockpit window and shout hurray for the people of Kitimat !!!!

hi rumleyfips...I know isn't it stunning? And isn't it wonderful? The Cons could offer me a million bucks, and even make me the ambassador in Tahiti, and even after this hideous winter I still wouldn't vote for them... :)