Harperland, the Con Monsters, and the Death of Reason 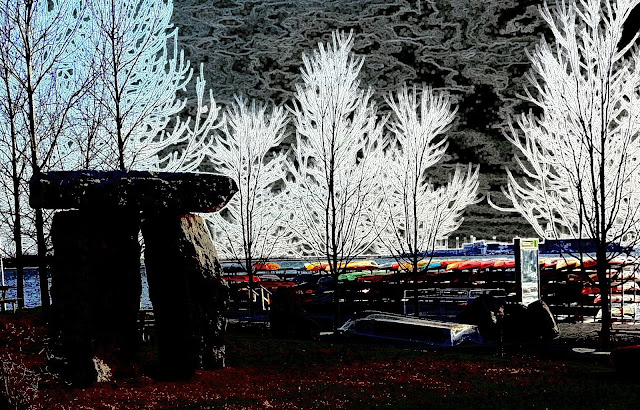 Once upon a time Canada seemed like a brighter, better place to me than it does today.

A country where an opposition MP could write a polite letter to a Minister like this one. (PDF)

And expect to get a reasonable reply.

But this is Harperland, and this is Pierre Poilievre... 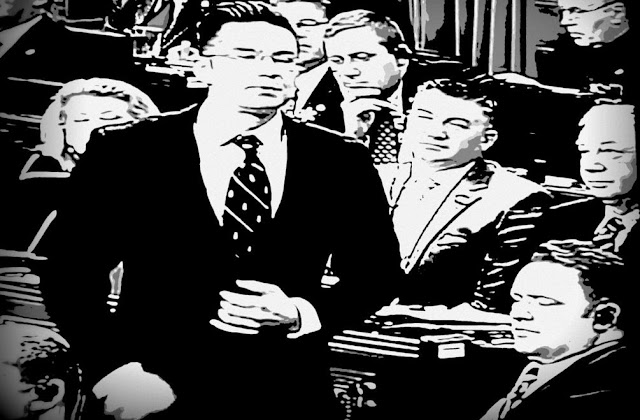 The brutish RepubliCon bully thug who will not listen to reason, in a country where decency goes to die.

The pathetic Harperite stooge who has been reduced to quoting a letter to an editor to support his foul Unfair Elections Act. Because he can't find a single expert willing to do that for him.

Reduced to trumpeting a poll even though it shows that the only thing he has going for him is ignorance.

Support for the Conservative government’s electoral reform is highest among those who don’t know much about it, according to a second poll from Angus Reid.

And that the more Canadians understand the bill the more they HATE it.

The Angus Reid survey released Thursday suggested that Canadians are less likely to be in favour of the bill the more they know about it. Among respondents who did not know much about the Fair Elections Act, 52 per cent said they support it. That number drops to 41 per cent among those who say they are familiar with it.

Which is an indictment rather than an endorsement. And can only suggest that ramming that filthy bill through Parliament, as Poilievre is trying to do, would be the death of reason.

This "Fair Elections Act" represents a unique moment. The government of the day is attempting to change the fundamental rules of our democracy without any prior consultation with Canadians or opposition parties and without securing the support of even one credible, non-partisan, unbiased expert or organization.

Yet so confident are the Conservatives in their talking points that they are willing to stare this evidence straight in the eyes and say: "Bring it on." They are quite literally daring opposition parties, the media and civil society to try and win this battle between rhetoric and reason.

It all springs from the diseased mind of their depraved leader... 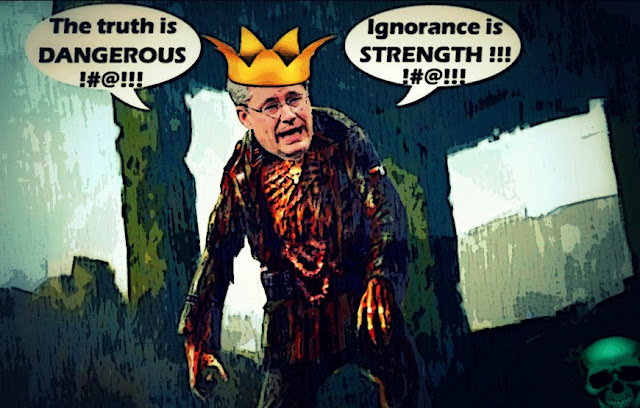 And for us the challenge remains the same.

Canadians need to be willing to educate their friends and family about the dangers of this act, as evidence has proven that we are more likely to listen to people we trust than the media or politicians.

Civil society groups need to do everything they can to educate their members about the dangers of this bill, give them the tools necessary to share that message with their communities and mobilize them to clearly demonstrate that passing the Fair Elections Act will lead to Prime Minister Harper's downfall in 2015.

And in that regard I can't help wondering whether in defence of reason we too need a little more raw emotion.

For petitions and letter campaigns like this one are excellent.

But in my opinion if we want to reach all those complacent Canadians out there, we can't just rely on arguments over the principles the bill would violate. As noble and as decent as that may be.

We need to show them the consequences of their inaction. Or what this could really mean to them:

Make no mistake: this act, if passed as is, will stack the deck in the Conservatives' favour for the 2015 election and beyond. And, perhaps even more importantly, it will signal the death of reason in politics.

We need to tell them the Cons are trying to steal elections so they can leave us helpless. So they can do what they want to us, rape our land, rape our values, steal our pensions, jail our children, make us pay for medical care.

Turn us into a police state, and leave our future in the hands of a MANIAC... 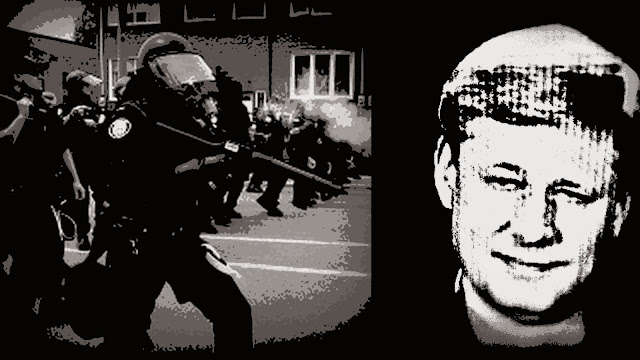 The one who was recently described like this by his former collaborator Tom Flanagan.

“He can be suspicious, secretive, and vindictive, prone to sudden eruptions of white-hot rage over meaningless trivia, at other times falling into week-long depressions in which he is incapable of making decisions,”

A man too dangerous to be allowed to remain in office. A man  Canadians don't trust with our democracy as far as they can spit.

And that message must be conveyed with videos, because only they can convey the horror of the situation, and the danger. And awaken the bovine masses from their complacent slumber.

I've been trying to practice that approach with videos like this one I recently made on the threat to medicare...

Hopefully the progressive parties and others will make them too.

And it's important to remember that all our efforts so far have not been in vain.

Angus Reid’s survey found 31 per cent of respondents were very or fairly familiar with the legislation, up from 20 per cent in a February poll.

But now it's time to hit Stephen Harper and his foul Con regime where it HURTS. Use fear as a weapon against THEM.

You know, my companion and I have both received offers to work abroad, and for the first time we are thinking of leaving. For no freedom loving person should be forced to live in a sewer like Harperland.

And what I find so striking is that so many of our younger friends feel the same way. They are desperate to leave this old and broken country, that they feel doesn't want them, and would condemn them to be slaves.

But before I leave and end this blog, I still dream of seeing the Cons defeated.

I dream of the day when the darkness will end..

And I will get my country back... 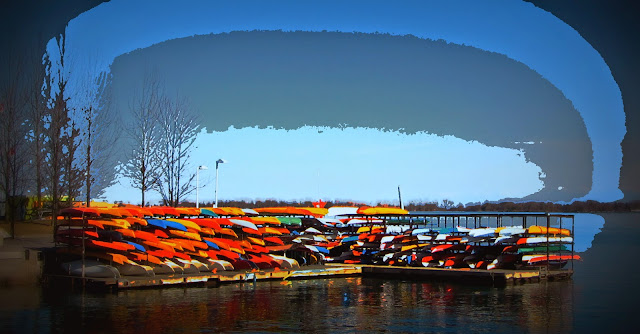 If you leave, Harper wins!

Canada was a great idea, where we could all share our unique skills & resources to the greater good. Now, it's being dismantled. Costs being downloaded to provinces, then downloaded again to municipalities & cities. This is a petty vision, not a great vision! This is turning Canadians against Canadians because of where they live. A place where private profit trumps social good. We should be ashamed that we disengage and let it happen.

Canada was a collaboration for a better life for all citizens. It is being deliberately dismantled to serve the international corporations and those that feed from it. Those with power & $ will use any means & methods to take what they can and demonize the ethical values of democracy.

A sad Harpo, does he realize wearing that jacket is an insult to real warriors?
http://burdreport.ca/wp-content/uploads/2013/06/harper-jacket.jpg

Hi Al... I'm not planning to leave until the Harperite cult is defeated. I only mentioned my situation because I am struck by how many of my friends are looking to get out. As tired as I am of living in a place where one atrocity follows the other and so many are so damn passive, I would never be able to enjoy myself abroad knowing that the Cons were still running Canada. Besides after all this time I'm not planning to miss the victory party. I plan to celebrate for at least a week or until I drop. I will have to leave the country in the summer for a while, but I'll be back....

To me Harper is a fascist dictator and he oozes evil. Harper is just as insane as, the dictators of the 30's and 40's. The RCMP work for Harper as we have seen, in their investigation of Wrights expense fraud. This is nothing new of the RCMP, if you recall them in BC? The RCMP were also just given another raise. So, the fix is in. There is information on this, all over the web and other news channels.

Duffy and Wallin will also get off their crimes too. If any of them went down, so would Harper. He is using every dirty tactic in the book, to stay in office. Poilievre and Harper's so called, *Fair* Election Plan, is nothing other than another election fraud. Poiliever should have just stuck, with his robo-call election fraud.

Harper is Americanizing Canada. However, trying to get that through to some in this country is an, exercise in futility.

The opposition seems entirely useless. If they can't get rid of Harper, never would they be able to govern this country. Everyone would just, walk all over them.

Steve, yes it's a huge insult! A warrior he is not! He will never be! It's not in him. He's a tyrant and every tyrant has his day!

I also wonder about the opposition! It seems that they could do more to stop Harper. I personally don't know what they could do but they should because it's their field of expertise and they have unlimited access to so much professional advice. There has to be something stopping them. I know we need to get rid of Harper but unfortunately they all have an agenda. It's always been like this and it always will be. At the moment, we have the worse we could ever have at the helm. Taking to the streets seems to me the best solution! But it has to be huge!

if the P and oil can believe this is voter fraud why haven't we heard of arrests, trials and jail time. can't fine much about in any of the press, even those who support oil can and his crew. if it didn't happen, they want to pass a law to prevent it from happening. there is a name for people who believe they need laws for things that don't happen. its usually, crazy, delusional, not playing with a full deck. O.K. just remembered these are Cons and they are playing one big con on the citizens of this country.

and blogging can be done from international desks:)
good luck with the travels Simon!

well its their specialty, adscam was huge, robocalls small, actionplan real, rampant voter fraud yep, but senate is sober second thought heros, in and out scam just persecution, but ndp are always stealing, the list of delusion is endless and really George Orwell combined with fRanz Kafka couldnt do justice to the machinations of the Harper govt;P

its not just a "petty vision", its a tribal vision.

Canada was a good idea. Heavy on the 'was'.
Then- Tea Party North- The Big Lie- and the fish bought it, hook, line, and sinker. Mass belief in urban myth brings nothing but trouble.