The Contempt of Stephen Harper and the Shame of Pierre Poilievre 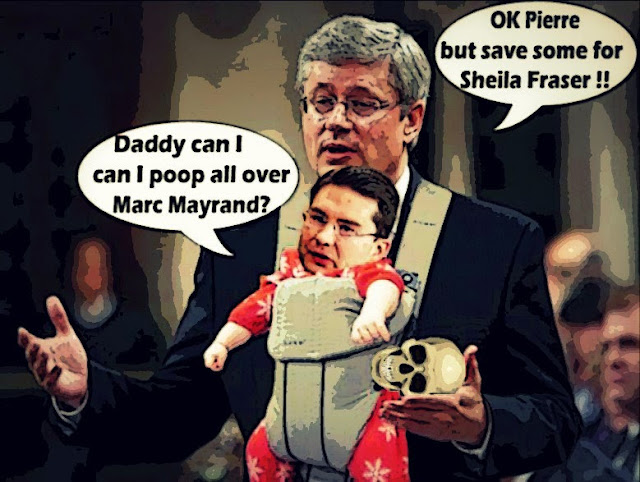 Well nobody can deny that they were made for each other. Or made of each other.

With Stephen Harper usually being the mouth, and Pierre Poilievre the other end.

For there was Harper's ghastly little baby today defecating all over the Chief Electoral Officer.

“(Mayrand’s) recommendations really boil down to three broad requirements for him: he wants more power, a bigger budget, and less accountability.”

Can you believe that? A sleazy member of the Con regime sliming an officer of parliament like that, and daring to use the word ACCOUNTABILITY???

The same one who dares not mention Sheila Fraser's name, even as he tries to smear No Name as a paid stooge of Elections Canada.

But then who can blame him for fearing the wrath of The Great Sheila? 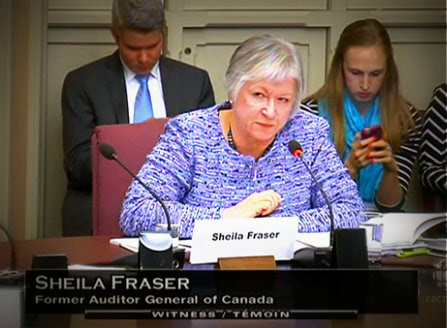 Because she was out there again today dismantling his foul bill in public. And saying this about Poilievre's cowardly attack on Marc Mayrand:

“This serves none of us well. It undermines the credibility of these institutions, and at the end of the day, if this was to continue, we will all pay because no one will have faith in government, in chief electoral officers, or our democratic system,” Fraser warned MPs.

“To actually attack (Mayrand) for bringing forward his concerns is totally inappropriate.”

And of course she's absolutely right. It's not just a vile assault on yet another officer of parliament. It's an assault on what's left of the sacred trust that should exist between government and the governed.

And it is a blatant attempt to bludgeon our democracy, make it easier to steal an election, and suppress the vote.

A trio of seniors group representatives say they are baffled by Conservative changes that will make it more difficult for many politically engaged seniors to vote in the next federal election.

And student representatives are scratching their heads over the proposed elimination of Elections Canada outreach programs that target low youth turnout.

But if you want to know how low Stephen Harper has already dragged our democracy, into the dark hole of his diseased depravity.

All you have to do is watch how he first reacted today when Tom Mulcair demanded that he apologize for Poilievre's cowardly assault on Marc Mayrand...

Because now he doesn't even bother to hide his contempt for Parliament. Or even answer questions with a Big Lie. Now he just ignores them.

He will show the Leader of the Opposition no respect. He will seek to debase decent Canadians like Sheila Fraser, he will smear anybody who dares stand in his way.

For he has nursed a grudge against Elections Canada for a long long time. The Unfair Elections Act we now find out is all about REVENGE.

A government backbencher, whose razor-thin victory in the 2011 general election came under scrutiny in a Federal Court challenge, claims “leaks” from within Elections Canada led to explosive news reports about fraudulent robocalls during the election and are likely one of the reasons the government wants to transfer Elections Canada’s investigative branch to the Director of Public Prosecutions Office.

“I’m sure it had an impact, because, I mean, the investigations, I don’t think were handled professionally,” Conservative MP Jay Aspin (Nipissing-Timiskaming, Ont.) told The Hill Times.

So NOTHING or NOBODY is going to stop him from having his way with Elections Canada.

And screwing it beyond recognition !#@!!!! 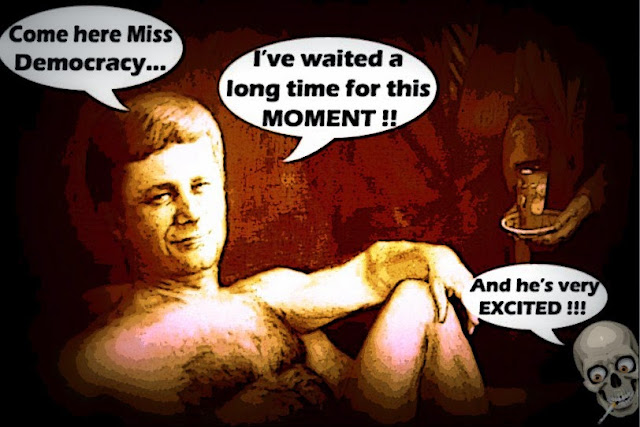 And the good news? He's out of his mind. Him and Poilievre and the rest of that scummy gang are pushing their luck.

Canadians are a complacent bunch, but they will defend their democracy.

We will use all of this to smear him further.

The Cons will drown in their own excrement.

And Big Daddy and his foul bully baby.

Will end up where they belong... 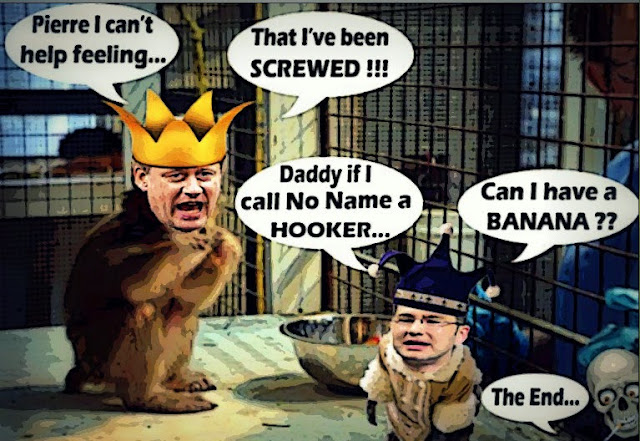 The Unfair Elections Act has once again been denounced by the likes of Sheila Fraser who by herself has more integrity than all the Cons combined. It's astounding that the now desperate Peckerhead Poilievre has resorted to personal attacks on Marc Mayrand and Sheila in a bid to justify this terrible bill. The fact that the Cons and their buddies at Sun News are the only ones supporting it should be evidence enough that this bill should be shredded and its author sent packing.
Anyone who follows the antics of Deceivin' Stephen should know that anything he does is done to either garner votes at our expense, smear anyone who disagrees with him, or gain an unfair advantage over his political opponents. The most repugnant part about Harper is how he uses others to force his agenda while he sits back and watches the train wreck. There's one word to describe someone like him, coward. This was quite evident at the height of the senate expense scandal when seemingly everyone around him were scrambling to hide the truth while he had no idea what was going on. Sure Steve. I long for the day when the RCMP comes knocking on his door and demands answers to why he said he was in the dark when in fact he was the central figure in it all. All it will take is someone like Nigel Wright or Marj Lebreton to do a morality check on themselves and start telling the truth.
JohnAnon

An interesting development - the English-Public school board in Ottawa (OCDSB) has condemned the bill.

aint gonna be no morality checks--aint gonna be no r.c.m.p.--aint gonna be nobody tellin' the truth 'bout harpie and his crime cabal. This government is modeled after the old 'merikan wild west town of Dodge City only you need to replace it with the name edmunton. Best politicians and judges and police money can buy. The time for righteous indignation passed us by in 2011 and we will never see the real Canada again.
I'm glad for Quebec. Those people seem to be the only ones left in Canada left with any real backbone.
Wish all the Anglophiles would take notice and grow a pair of cajones like them.
Mazeltov!

Alison @ Creekside sums it up perfectly:

Unfortunately you are absolutely right. More and more people are paying attention and that is good. But ultimately it won't matter. People's response is to wait for 2015. They misunderstand intent for incompetence. Majority don't realize the extent of the evil within Canada. There will be no Canada as we know it, by the time the next elections are due. This is all going according to Manning's plan.

uhhh, harper doesnt even bother answering the hard questions anymore. He just reads from scripted talking pts.How is it possible that this politician ever become as high up as he does. Hes ridiculous. I cant stand watching question period with his BS, I want to smack the smug off his face. Im so glad that Mulcair tries as hard as he does, but for once, it would be nice if the cons were actually held accountable. They bypass every means, question period, media questions, petitions, legal issues....they just avoid, evade and deny. I hate them all, and when I see the likes of Peter McKay fall into line with the rest. Well its just sad.

Crime Minister Harper and his minister henchmen, belong in prison for traitors doing acts of treason. This country belongs to us not to that evil dictator nor, to his gutless ministers.

However. Our opposition appear useless too. If they can't get rid of the monster Harper doing his crimes against this country? They are not fit to govern either. This asinine so called *Fair* Election Plan is so corrupt and an obvious cheat, and the opposition can do nothing? Then they are not worth their salaries. The world has said this Fair Election Plan is not fair, what-so-ever.

What country can we call on, to save us from Crime Minister Harper? Should we call in the UN, to rid us from an evil dictator. Isn't that what Harper did to Putin? Harper thinks Putin is an evil dictator, just like he is.

The thing is that as far as I can see CTV is still on board. The cons want to foucus all the energy on vouching, and then I suspect they will fold on this point. Letting the real prize of no accountability slide.

Tell Exxon-Mobil they can have alberta and the tar pits if harpie disappears and see how long before he mysteriously leaves the country! ;-)

As ridiculous as it sounds, the Queen of England is the only one who can save Canada, since her agent the Governor General is obviously aiding and abetting the illegal regime. That is if she herself is not involved in the coup de etat that has occurred.

Harper and his Cons know this bill is a con job Canadians aren't buying. To attack those who are voicing their opinions of the proposed bill............You gotta wonder. Whatever happened to free speech. I know its in our constitution. If they have any doubt they could consult with the kid and beard across the isle. One has a Dad who helped write it and pass it. The other other knows how to read it, interpret it,and fight in court to defend it. Elizabeth May knows if this bill passes her Green Party will have a difficult time making any gains because our democracy, as we knew it, will be gone.

Wrote my M.P. John fraser to express my concerns regarding the bill. asked him if he had actually read it. Its over 200 pages. Perhaps they should send all Con M.P.s to a school room and have them sit there until they complete reading it. O.K. some may still be there by 2015. Then if they finish reading it, there ought to be a quizz.

Canada, a country which once had observers go to other countries to supervise their voting may now need help from those countries to ensure Canadians get a fair chance to vote. Harper started by defunding women's groups in Canada and he hasn't stopped "defunding" Canadians since. Now he wants to "defund" us of our right to vote. Nice going their harpie.

After watching Pierre Poilievre's April 8 performances at the Senate and House Committees on the Unfair Elections Act, I decided to do some research and found Poilievre's first public utterance:

"Did God really say, 'You must not eat from any tree in the garden'?

...here in southern ontario, 20 CON years on- "Common Sense Hate Revolution"- i'm
studying French. Thanks for being there, Quebec...

Harper is "THE JOKER" and Pierre Poilievre is his little whip.
Way to go STEVE:)
WE NEED MORE FOLKS LIKE YOU TO SPEAK FOR SUPRESSED FOLKS LIKE US.