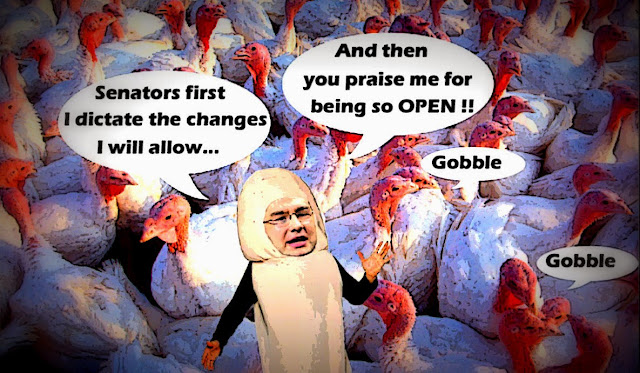 Oh. My. Gobble. I see that Pierre Poilievre is still trying to pretend that his foul Unfair Elections Act is perfect.

But that if the Cons in the House of Turkeys want to make it even better, he might  welcome their recommendations.

"I'm prepared to defend every single measure in the Fair Elections Act," Poilievre told CTV's Power Play on Tuesday. But he added: "From the beginning I've said if there are good ideas that will make this great bill even better, then I am happy to hear them."

When in fact the bill is hideously flawed, those recommendations are only a SCAM designed to put lipstick on a pig.

What Conservatives senators have really done is give the government cover to suddenly shift course, drop their bullying demeanour and pretend to be reasonable and conciliatory then go ahead and pass a deeply flawed bill with nothing more than cosmetic tweaks.

As Craig Scott, the Toronto New Democrat and his party’s democratic reform critic put it: “They’re putting lipstick on two pigs — themselves and this bill.

And Stephen Harper and his filthy Con regime  are still counting on the ignorance or the indifference of Canadians to ram the essence of that foul bill through Parliament. 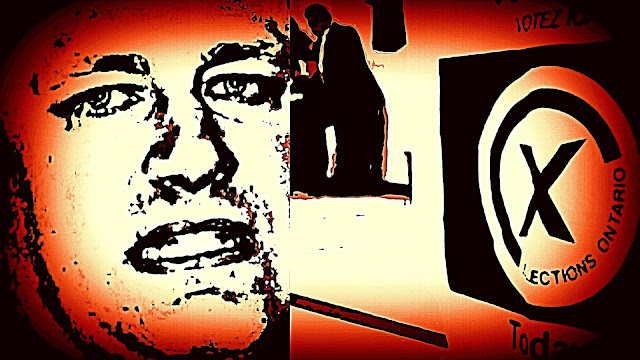 They already know that four Canadians in 10 don’t vote, six in 10 in the age category 18-25 didn’t vote in 2011 and that swath of the electorate is paying no attention to the legislation.

They believe opposition MPs are hearing from constituents because the election act has become the latest vessel for anti-Harper sentiment but once passed, opposition criticism will simply sound as so much bleating from losers.

But I think they're making a big mistake. Because even the MSM hasn't fallen for the Senate scam.

The Conservative government may finally be waking up to the enormity of its own recklessness. With the Fair Elections Act, Democratic Reform Minister Pierre Poilievre wasn’t just taking aim at Canadian democracy. He wasn’t just going to war against evidence and experts. He was taking a gun, loading the magazine, cocking the hammer and pointing it at his own head and the government’s.

Finger on the trigger, he’s now wondering if anyone might suggest ways to lessen the chance of injury. The Conservative majority on the Senate Legal and Constitutional Affairs Committee, having barely begun its study of the bill, is already recommending that he remove some of the bullets. Some, but not all. Here’s a better idea, for the country and the Conservative Party: Put the gun down.

The more they hammer away at the bill, the more Canadians will come to understand and hate it.

And I truly believe the Cons have underestimated the anger out there... 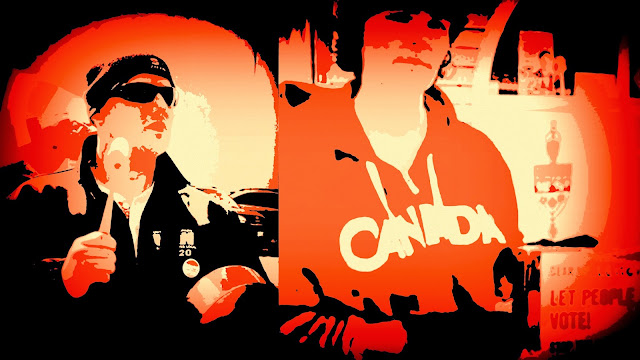 Because I've never seen an issue arouse such strong emotions.

Or so much boiling rage directed at those responsible.

An investigation into a threatening letter sent anonymously to the home of Democratic Reform Minister Pierre Poilievre – the man spearheading the controversial Fair Elections Act – has led RCMP to question at least one other letter-writer who wrote and signed his own message to the minister criticizing the bill.

And when police are fingerprinting 73-year-old men, you know the Cons have a problem.

Canadians may be a complacent lot, but they will defend their democracy.

And they seem to understand what the Harperites do not.

You can't put lipstick on that bill.

And you can't put lipstick on a Con... 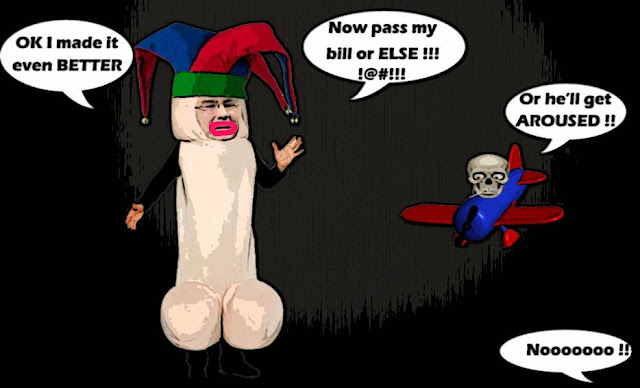 We will use all of this against them.

Simon. What I wonder about is all of the foreigners? Will they vote? They have drivers licenses and health care cards however, they may not be Canadian residents? We also know Harper has brought over, thousands and thousands of foreigners, to take Canadian jobs. The number of Chinese brought over to BC is huge.

Harper his so called Cons and the Campbell/Clark BC Liberals are so corrupt, they are sickening and they also cheat to win. Harper will use every dirty tactic in the book, to stay in office.

If we don't get rid of the evil of Harper, we are going to lose this country. Harper has white hot rages and week long depressions, so Flanagan says in his book. With Harper's mood swings he could also be bi-polar.Harper certainly only cares about Harper and, that is blatantly obvious.

Harper is the one and only Canadian PM ever, to be held in contempt of Parliament. And, this monster we have been saddled with, corruption, greed, dirty tactics and all. He will cheat this election, as he did last election. Count on it.

hi anon...there have always been a lot of foreigners and other not eligible to vote, and there is no evidence that they have engaged in massive voter fraud. So I'm not worried about that. The Chief Electoral Officers have never denied that some fraud might occur, but their position is that it's better to risk a handful of cases, than disenfranchise tens of thousands of people who have the right to vote, but lack a piece of identification...

Simon I'm embarrassed to be Canadian:

The absurdity of what Canada has become, which has degenerated under the Harper government to an echo-chamber for elitist's who all they have to contribute to society is to have hoarded the largest pile of cash they could put their meat hooks into legally or illegally, morally or immorally. Elites only see in terms of monetary value plants, animals and humans are useless to them unless they can turn them over for profit. Medicare along with every other government service is useless to them because there is no profit in it, that's why they want to privatize it, simply so they can capitalize on it and reap tremendous profit on the sick disabled elderly and dying. We used to have unprintable terms for people like these now they prefer the term business men simply enjoying a profit. For elitists the only thing important in life is the race to the top of the 1% club.

So as citizens what are we supposed to do? The Law does not apply to the federal government or its friends or its contractors or its employees. The Law does not apply to corporations or the very rich. If I object I have immediately placed myself on a watch list by either RCMP or CSIS or maybe even both. If I disagree with the government or a large corporation's activities I'm involving myself in criminal activities even if I'm trying to expose fraud or criminal activity. If I peacefully demonstrate I am a fringe extremist radical terrorist of one stripe or another. If I tell the government that I do not agree and I don't vote conservative, I have become Harpers enemy and am put on a list for who knows what nefarious purpose in the future.

What happened to our Canada since when did it belong only to criminal dictatorships posing as democratic government. Since when did the oil business take over this criminal dictatorship and ensconce itself in areas of government like CSIS where it is treasonous for it to be and nobody cares? Welcome to Canola-land, Harpers nirvana paid for by Koch.

Time to revolt: Vote for Harper to leave office in disgrace eliminate the cancerous Conservative Party of Canada by offering it not a single vote outside its own membership. Let it slither back into the darkness from which it emerged born out of deceit lies and broken promises closed door deals and back room meetings, no these conservatives are not fit to govern a nation as great as ours. May 2015 end the depressing reign of conservative hell for Canadians we have been punished enough.

voter fraud isn't really an issue in Canada. The bill is not necessary. The bill is being brought before parliament because the Cons want to ensure they stay in power. the cons don't want to be investigated when they do things which might be considered unethical or down right illegal. that is why this bill was proposed. Not because there was voter fraud. if there was actually voter fraud, like maybe a couple of dozen cases, each election, there would be arrest, trials, prison sentences. Haven't seen that happening. Most likely more people are shoot by unregistered long guns than there are people committing voter fraud.

Its all simply voter suppression. Harper and his cons are simply an example of how dictators come to power in a democracy and then start to destroy that democracy from within.

hi Mogs....I know how you feel. I never thought anyone could make me ashamed to be a Canadian, but Harper and his filthy gang have managed to do that. However, I am determined that this embarrassment will soon end, because our land is beautiful and it deserves better. And I couldn't say it better than you do here:

Time to revolt: Vote for Harper to leave office in disgrace eliminate the cancerous Conservative Party of Canada by offering it not a single vote outside its own membership. Let it slither back into the darkness from which it emerged born out of deceit lies and broken promises closed door deals and back room meetings, no these conservatives are not fit to govern a nation as great as ours. May 2015 end the depressing reign of conservative hell for Canadians we have been punished enough.

Enough is ENOUGH. And we're taking our land back...

hi e.a.f...the bill is everything you say it is and more. And the Cons are so foul and their leader so depraved they think they can get away with it. But they are deluded. As i said in my post, I've never seen an issue make people in our peaceful kingdom so angry. And it will be the final nail in the Con coffin...