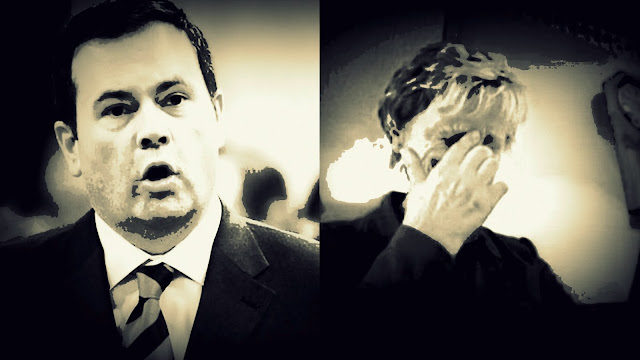 Well surprise, surprise. I see that Jason Kenney has stopped bragging about how he plans to fix the foreign workers problem, after the tragic story of that waitress in Weyburn, Saskatchewan.

Who was reduced to tears after she lost her job to one of them.

And who can blame him eh? When he created the problem, Canadians are so angry.

And even McDonald's admits the problem is so big it's temporarily halting his pimping services. 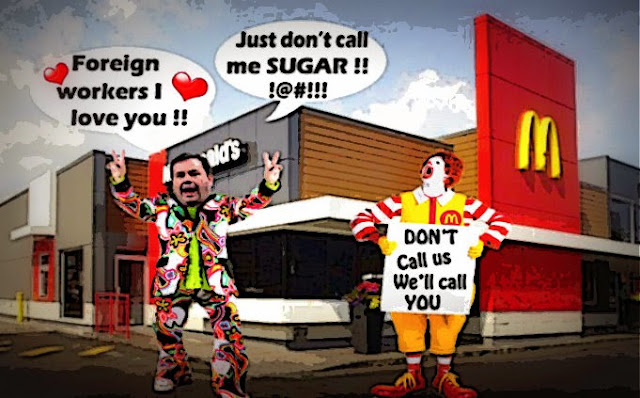 McDonald's Canada is putting its temporary foreign worker program on hold while a third party conducts an audit on its use of the plan. Stung by recent criticism of its use of foreign workers, the restaurant chain's vice-president of human resources Len Jillard says the firm needs to pause the program to prove to Canadians it's not abusing the program or its workers.

But don't think Kenney isn't concerned about foreigners in Canada. He's outraged, outraged I tell you.

At the presence in Canada of an American billionaire.

Employment Minister and Calgary MP Jason Kenney says a billionaire Democratic Party donor who opposes Keystone XL and oil sands development can't simply fly a private jet into Canada to influence politicians. This is not the "Wild West," Kenney said about Tom Steyer's recent trip to Alberta, adding that Steyer would need to register as a lobbyist.

Even though Tom Steyer isn't guilty of ANYTHING.

There is no evidence that Steyer paid Canadian environmental groups or tried to lobby Canadian politicians. However, Kenney said the US activist is full of "misinformed sentiment" and has no clue what's going in Alberta's oil sands.

Except of telling the TRUTH.

And even though Kenney and all the other oil pimps in the Harper regime are doing the bidding of these sinister foreign billionaires. 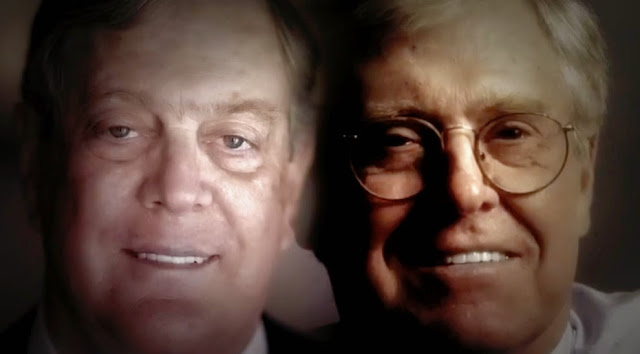 You might expect the biggest foreign lease owner in Canada's oil sands, or tar sands, to be one of the international oil giants, like Exxon Mobil or Royal Dutch Shell. But that isn't the case. The biggest non-Canadian lease holder in the northern Alberta oil sands is a subsidiary of Koch Industries, the privately-owned cornerstone of the fortune of conservative Koch brothers Charles and David.

And the Cons are suffering from Koch Addiction, like their fellow RepubliCons.

But then that's what the Temporary Foreign Workers program was all about. Flooding the country with cheap labour to drive down wages and bust unions just like the Koch brothers want.

And it's now so big and so out of control thanks to Kenney, it can't be properly policed, so it must be scrapped.

The Conservatives have now done what seems to be the impossible — cutting hours for Canadian workers, setting the stage for the ill-treatment of temporary workers, further alienating the labour movement in this country and fielding complaints from small businesses who play by the rules who say those rules are too onerous.

In reality, the program either needs a complete overhaul, with caps put on the number of temporary workers in this country, or it should be scrapped and replaced with new immigration rules.

And all I can say is Jason, Jason, what is it with you and FOREIGNERS?

Why do you serve them so faithfully, and put their needs before the needs of Canadians?

And why does your Great Leader also service those foreign interests so shamefully?

Yup. As I've said before, Stephen Harper and his foul Cons like to pose as patriots, when in fact there are no greater TRAITORS.

We shall use this issue against them to do them great damage.

We shall shine the light of truth on them.

And expose them for who they are... 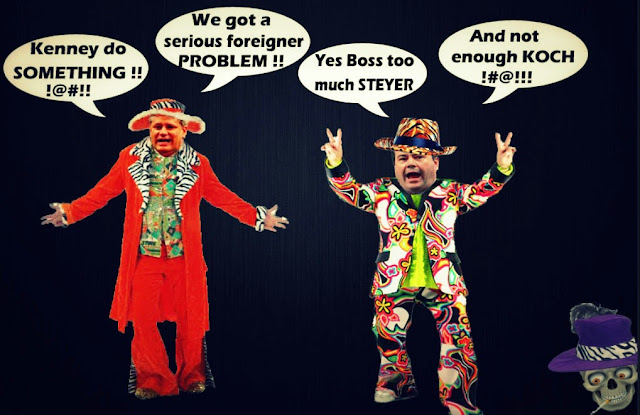 I detest the smile on those Koch brothers' faces! They look like the cat who swallowed the canary! It's a sickening smile!

Harper said he was going to do this very early in his political career. I think his words was "turn employment into a buyers market". Meaning no unions, no workers rights, race to the bottom where people have to fight for jobs and feel grateful for the scraps that the business class gives them. TFW is a way to fast track to that point.

Yep, this is major suckage, but I'd like to add a note of optimism, if that is possible..despite the literal billions thrown at the Republican election campaigns, by the Koch brothers and others in the US elections, Obama got elected, and re-elected..not that he's been any great shakes, but he has kept Harpo baying at the moon..
In the last California state elections, Marg Whitman, another right wing zillionaire, threw millions at her campaign to get elected governor..who got elected? Jerry Brown, a Democrat in the old school tradition of Democrats who actually want to get something done for their constituents..
It truly sucks when we have to fight mega-millions of propaganda dollars, and Con agendas, but the truth is, money can't always buy either legislation or elections..and one can't help but smile when Obama once again delays a decision meant to put more fat dollars into the Koch brothers' coffers...a little 'payback,' perhaps?

I was still living in the u.s. when Jerry Brown was governor back in the day and he isn't the same guy now he was then. He's taken a sharp right turn in his old age, much to the chagrin of us who knew him when . . .

hi anon... yes they are a creepy duo aren't they? And of course two of the most disgusting right-wingers on the planet. They call them the Kochtopus because their tentacles are everywhere. However they say octopus is very nice when fried in olive oil and some lemon juice, and we shall feast on the Kochtopus one day... ;)

hi anon...you're right, he is a small minded right-wing ideologue who never should have been allowed to escape from the Fraser Institute.His lack of vision is appalling and his race to the bottom is quite simply obscene. I don't know where that foul creature sprang from but it definitely isn't Canadian...

hi mizdarlin...thanks for providing a note of optimism, I think we all need that these days, and I'm tired of bearing the burden. ;) But you're right,money can't buy everything, and their efforts can backfire. As for Obama, the opportunity to screw the Koch brothers AND Harper must be simply irresistible. There can't be enough righteous payback as far as I'm concerned...

hi anon 12:21...has he really? I lost track of him when he was still wearing sandals, but I'm disappointed to hear that. But yes, sooner or later Big Business gets to most of them. My favourite American politician is Bernie Sanders the senator from Vermont. I met him once, if you can believe it, at the original Ben and Jerry's store, and he really is a great old guy...

Bernie is awesome, I love watching him in action on Bill Maher.