Darth Harper and the Robocall Scandal 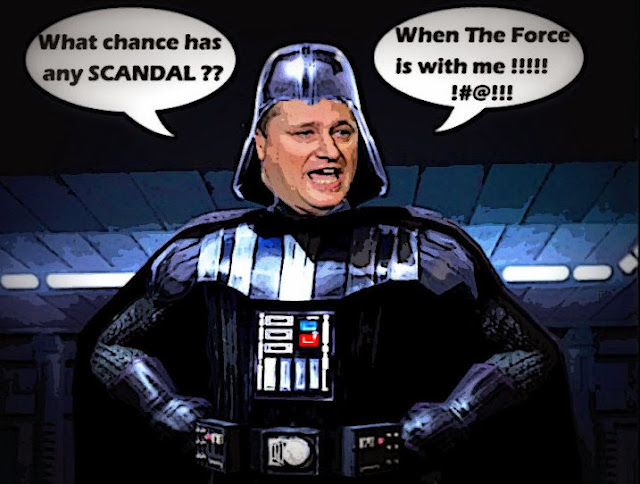 Well he must be feeling pretty pleased with himself. He must believe that The Force is with him.

And to be fair, it did decide that Nigel Wright shouldn't be charged for paying Mike Duffy to keep his mouth shut.

It did decide that the sight of an underage drinker lying unconscious in his driveway, after a swim suit party, wasn't something it should be concerned about.

And then today there was this gift from the Elections Commissioner.

The federal Conservative Party says it stands vindicated by Canada’s top elections watchdog after a three-year probe failed to produce evidence of a deliberate or widespread conspiracy to suppress votes through the use of automated or live robocalls in May 2011.

Which of course had the Cons and their stooge media crowing or howling like jackals, or Rob Ford on crack.

It had Pierre Poilievre in a scary state of arousal... 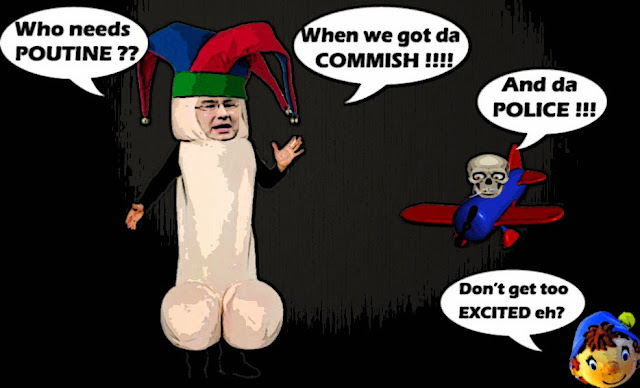 “The Conservative Party ran an honest and fair election campaign. We followed all the rules, we won fair and square,” Poilievre told reporters. “Those who have been making baseless smears ever since have been once again proven wrong in the process.”

And no doubt had Lord Harper feeling like he should throw another wild party...

While many progressives on the other hand, felt like organizing a wake, for democracy in Canada...

But not me eh? As I sat on the edge of the pier this afternoon, in the warm sunshine, playing my guitar, feeding my pet swan, and staring fondly at the first flowers of Spring... 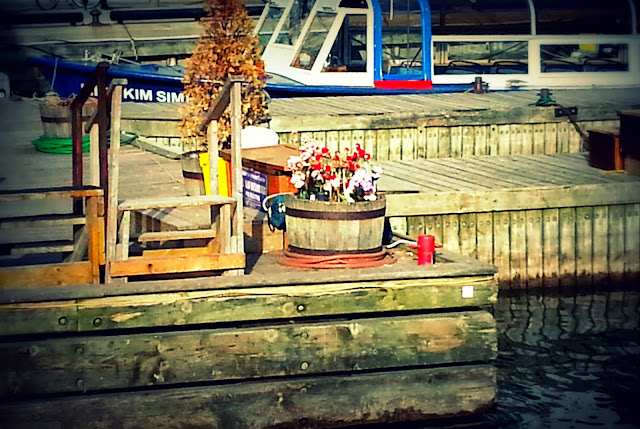 I felt as confident as ever that Harper and his foul Con gang will eventually drown in their own excrement.

Because firstly, they didn't get away unscathed.

Côté’s probe found only the Conservative party made calls giving polling station locations despite the party’s admission it knew locations could change, and Elections Canada’s clear warning not to do so.

There is a difference between being guilty and being charged.

Secondly, politics is perception, and in that regard Harper is already fatally damaged. Most Canadians don't trust him as far as they can spit, so what happened today won't change many minds, and may make some even more determined to defeat him.

Because even those who are dumb, brutish, and ignorant.

Although the Harper government’s proposed Fair Elections Act has garnered much criticism, only a minority of voters say they are following the issue, a new poll has found.

Know a sleazy Con artist when they see one.

Thirdly, when Pierre Poilievre rams his Unfair Elections Act through Parliament, it will only help convince more Canadians that the Cons are trying to steal the next election. And provide people like Charlie Angus with even more ammunition.

Angus called Côté’s report “disturbing” because it showed the Conservatives obstructing an Elections Canada investigation, avoiding accountability even as the government moves to limit the watchdog’s investigative powers further in the proposed Fair Elections Act.

And lastly but not leastly, when the robocall trial begins in June, and PMO operatives are summoned to testify under oath, it will blow the scandal wide open again. 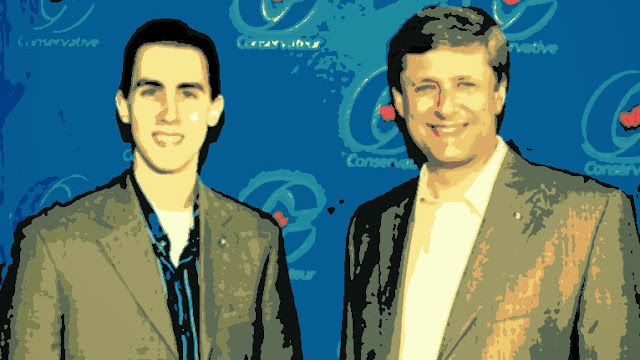 For even the brutish hordes can understand and enjoy a sordid trial.

And it must be said that Michael Sona, the man accused of being Pierre Poutine, and seen here with Boss Harper, is sounding rather confident... 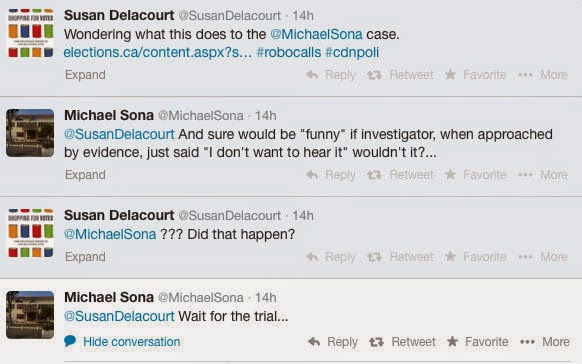 And seems to suggest that he knows something we don't know, which could be REALLY interesting, and can only smear them further. If that's possible eh?

Yup. It's important to remember the Big Picture, and that what we are engaged in is a brutal war of ATTRITION.

They hurt us and Canada, and we hurt them. They fling their monkey pellets at us, and we return them in their general direction.

If Darth Harper was a nice guy instead of a depraved maniac, and his government wasn't so tired and corrupt, and Canadians weren't so eager for change, he might have had a chance of surviving.

But as it is, even after today, and even if The Force has been with him recently, the odds are still not in his favour.

We still have him in our sights, we shall smear him beyond recognition.

And his ghastly Con Death Star.

Is still heading in the right direction... 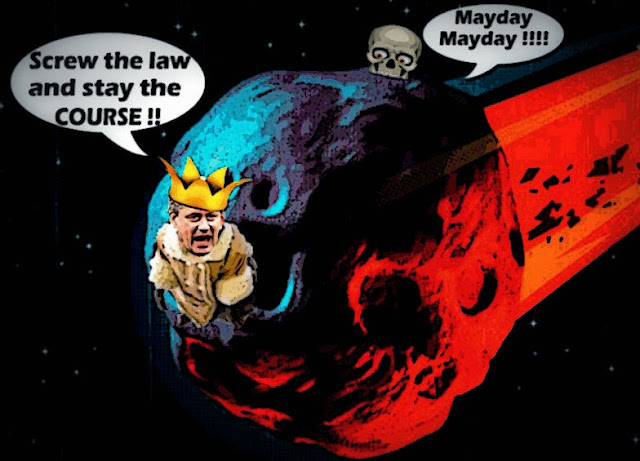 hi Steve...I'm not quite sure if you're suggesting we should pray for Harper, because if you are I'm not sure I can do that and remain faithful to my conscience. However, although I'm not religious, I do spend a lot of time praying for the deliverance of this country...

I pray for all bloggers - thank God you're here!
I was disheartened until I read your blog Montreal Simon!
Harper as Darth Vader - there we go! No matter how much it looks like he'll win, he can't because he has gone to the dark side.
Yahoooooooooo!

Reminds me of another con caught with coke in his car. He wasn't guilty either, but no one denies the coke was there, he just couldn't be found guilty.

Well? All Wright did was, aid, abet, cover-up and pay the bill for a Senator, that was stealing from the people. All the PMO did was, sanitize expense claims. The Royal Conservative Mounted Police found Wright innocent. Nor, will Duffy and Wallin be charged. The only two that will go to prison are, Harb and Brazeau.

Cote was appointed by Harper and the fix is in. Everyone supporting Harper have no, self respect, honesty, decency, ethics nor morals, what-so-ever.

Make no mistake, Harper is a fascist monster. However, our opposition parties are worse than useless.

seems like the cons are bullet proof, I sure hope Sona gets to trial and manages to blow this open, but I fear that between now and June something drastic will happen. Say like all charges dropped against Sona and him with a big payoff and career change, perhaps england:P

Hello, Simon, just following a link after googling that twit Finnell. The guy is a sanctimonious bastard with a reputation for posting comments like that in the hopes of getting people to follow his blog. The self righteous prick has a reputation for spamming people like this.